It's getting down to the wire. On August 4, the window closes for comments on the Mercury and Air Toxics Rule. The feedback the EPA has received will set the stage for the next act in the fight for clean air.

I've put out links where you can send a note to the EPA, and have asked parents to join the Moms Clean Air Force -- an advocacy group. If you think there is no cause to worry, check out the July 27 New York Times article, "Republicans Seek Cuts in Environmental Rules."

I recently listened to a call sponsored by the League of Women Voters that discussed the need for citizens to be proactive. The participant that engaged me on a visceral level was Alexandra Allred, the mother of an asthmatic child. Her comments stayed with me as an example of a mother who had decided that speaking up and acting on her beliefs was essential--not just for her son, but also for the 7.1 million other children who have asthma.

I reached out to Allred by phone and e-mail. She had a powerful story to tell. I learned that in addition to being a mother, she was also a writer and the co-founder of the U.S. Women's Bobsledding Team in 1996. It quickly became apparent that Allred had used the same competitive drive she had harnessed as an athlete to find out why her son had become sick -- and to question the power of companies to pollute with impunity.

Below is her story, as told to me in conversation and through written questions:

My family moved to Midlothian, Texas in 2001. We liked the rural setting, smaller classrooms, and found a four-bedroom home on three acres. When I saw the nearby cement plants and asked about them, I was told that they were "in compliance" with regulatory laws. We decided that everything must be safe.

Within two months, my son Tommy, age 2, began getting sick all the time. He had pneumonia, double pneumonia, bronchitis and then asthma. It was not until a few years later that we finally got the official asthma diagnosis. Tommy had been hospitalized six times in two months, and his health was rapidly declining. During an intake, a doctor from Children's Hospital in Dallas noted that we lived in Midlothian -- the "cement capital of Texas." He connected the dots for me.

As I began my research, I discovered that nearly 400 tons of various kinds of toxic pollution were released into Midlothian's air, land, and water in 2004. This included over 1,000 pounds of Mercury, 119,000 pounds of Lead, 58,000 pounds of Benzene, 89,000 pounds of Toluene, and 600 pounds each of Styrene and Naphthalene. There had been an increased production and lessening of pollution controls in 2005, when a Bush appointee became the head of the state's EPA. He represented a "pro-business" attitude.

In 1986, the currently named Ash Grove Cement Company began burning hazardous waste in Midlothian. It was the first plant in Texas to do so, and because of a loophole in the law it did not have to apply for a full federal permit. Before the people of Midlothian came to look at hazardous waste as "normal," there was an outcry. But a hearing was denied because citizens were one day late in submitting their petitions.

A second Midlothian cement plant, TXI, had complained to the Texas Air Control Board about the toxic metals being emitted, unregulated, by Ash Grove Cement. However, when TXI saw the potential profits, they began burning hazardous waste in 1987. Like Ash Grove, TXI made sure their permit request to burn hazardous waste was quietly passed before a public hearing could be held.

In the past, citizens have been kept in the dark about the inner workings, health issues, and political stance of the cement plants. For many residents of Midlothian, this was the first time they had heard anything about hazardous waste burning. But because Midlothian's three cement plants and steel mill accounted for between 55 to 65 percent of tax revenues for the city, concerned people didn't have much of a voice. It had become common practice to build and operate similar cement plants in rural towns, mostly in the south and mid-west. Those less populated, less educated residents were not as likely to ask questions. Plus, small towns wanted the economic boost. When more communities began to speak out, the Federal government passed new regulations to govern boilers and industrial furnaces burning hazardous waste.

Midlothian's population was just over 6,000-and the three cement plants and steel mill were emitting 1,502,123 pounds of chromium, lead, manganese, mercury, and sulfuric acid. Dioxin, the worst of the cancer-causing agents, was also being spewed into the air. I would later learn that the state of Texas was taking in hazardous waste from other states, including Puerto Rico, because no one else wanted it.

It was one roadblock after another before the American Lung Association, local PTA groups, physicians, and environmentalists pushed politicians to respond. In September 1994, new state guidelines were drafted regarding hazardous waste burning and emissions. However, it all came to a grinding halt with the election of Governor George Bush in November of that year. Previous proposals were ignored. Metal emissions were increased by 800 percent; dioxin emissions increased by 500 percent. Texas's biggest polluters were allowed to self-regulate and self-report.

By this time, my son was taking an adult dosage of medication, although he was not quite 50 pounds. We had to be schooled in teaching him how to breathe, and how to keep records so we would know when he needed to go to the emergency room. In order not to damage my son's body, we had to rotate his steroids. Today, at 12, his lungs are permanently scarred.

I began to speak out more and more. I had the support of other parents, but none of them wanted to step forward because they were concerned about retribution from neighbors in our small blue-collar town. It is remarkable to me that caring about clean air is seen as "tree-hugger" or "liberal" or "radical." I am always amazed that people can't understand that our future includes our children, and their health relates to clean air.

In 2008, USA Today released a study on toxic schools in the United States based on harmful emissions. My son's elementary school landed on the top of the charts--the upper 1 percent. Remarkably, people continued to deny there was a problem.

I contacted Erin Brockovich, who came to Midlothian in 2005. She told me that if I lived anywhere else in the nation, we would have a lawsuit. However, she informed me that Texas was a 'business first, people second,' state. So I traveled to the EPA headquarters in Raleigh, to testify before the State Director. When I got home, I learned that they went ahead and lowered the standards to release more mercury into the air. Feeling that big business was rolling over us, I made appointments to see Sen. Kay Bailey Hutchison and Sen. Jon Cornyn in the hopes that they would see how sick Texas children were getting. Instead, I met Sen. Barack Obama and Sen. Dick Durbin. Any senator's interest in our plight was a bonus. The irony was that as a Texas constituent, I couldn't get either Texas senator to meet with me or discuss the Midlothian air quality, but I could get the ear of two Illinois senators. Obama told Tommy about his own daughter having asthma. We left on a cloud of hope.

Business interests have been very proactive in making everything seem extreme, claiming that clean air will cost us billions and Americans will lose jobs. They say they are sorry that my child's elementary school has been labeled toxic, asthma rates are rising, and American families are spending millions on asthma medications. But they still want to make the biggest profits possible.

I've yet to meet a mother who got involved in Clean Air activism for any other reason than wanting to ensure the health of her children. Moms do not have any other motive. Wrong is wrong, and as the daughter of a military hero and former U.S. Diplomat, I was brought to fight for what is right.

When you fight for clean air for children, you are fighting on behalf of all children and our future.

This article was written for the Moms Clean Air Force blog 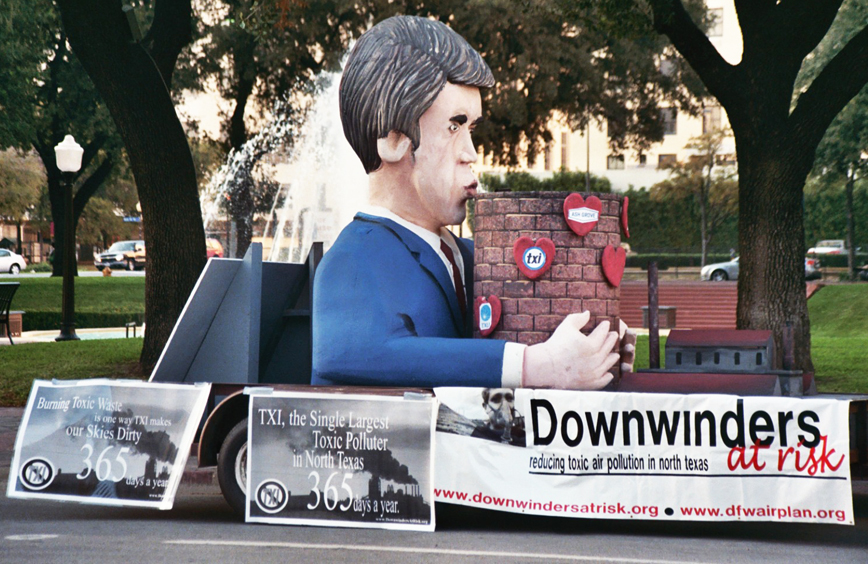