George Phillips is at the counter strumming an acoustic guitar. He's sounding out its sound. In a back room, a piano student is scaling the scales. Up and down, down and up it goes like an aural escalator to nowhere.

A young man walks in to buy some guitar strings, and George rushes to the other counter to ring up the sale.

George, a fire hydrant with Einstein's frizzled hair, is the owner of Astoria Music, but it's more fitting to call him a one-man band because ever since he took over the shop three decades ago, he's remained its one and only employee. He makes the sales, repairs the instruments and hires the players who teach piano, guitar, bass and violin. 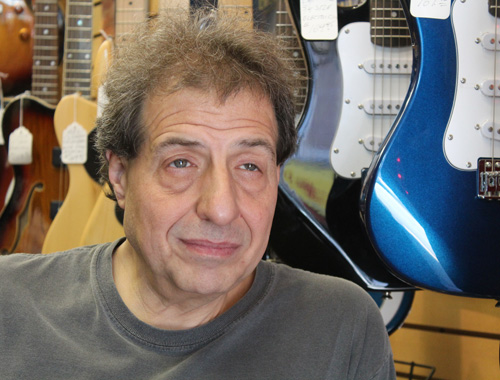 Photo by Nancy A. Ruhling
Before he was the owner of Astoria Music, George was a fan.

"There's a little too much work for one person but not enough for two," he says almost apologetically.

He's not complaining; he loves the shop, and if he has to stay a couple of extra hours every day, that's ok, because he gets to be the conductor of the whole orchestra, such as it is. 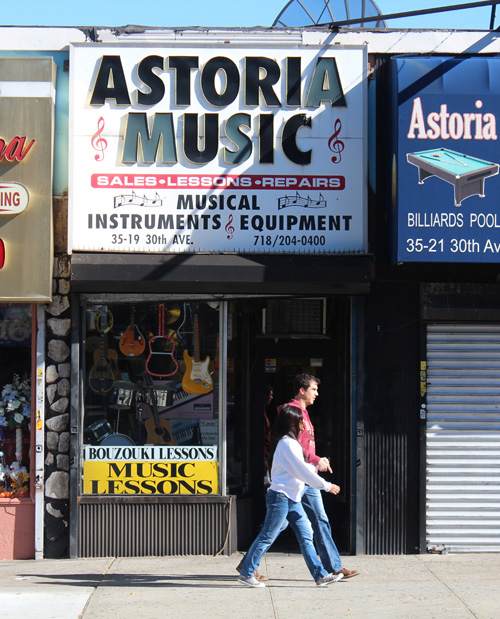 Photo by Nancy A. Ruhling
Astoria Music opened in 1922.

According to George, Astoria Music is the neighborhood's third-oldest business; Steinway & Sons is No. 1, and Ronzoni, which is no longer based here, stands fast at No. 2.

Astoria Music was born in 1922, and George followed its lead, entering the world exactly 30 years later, in 1952, when the Truman White House hummed along with the singing of First Daughter Margaret. His parents were Greek immigrants, and they raised their three children in Harlem. 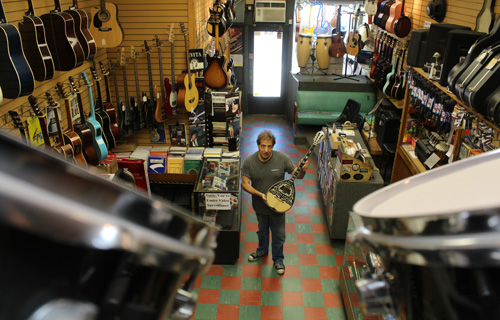 Photo by Nancy A. Ruhling
The shop shows off its retro look.

"When I was a kid, I used to shine shoes," George says. "I got 10 cents a pair. I was the best. By the end of the week, I sometimes had as much as $1.30, which was big money in those days. We also used to buy boxes of Hershey's chocolates from the local candy store and sell the bars individually. They were 2 cents each, and we sold them for 5 cents each. We used the money to buy ice cream."

In those days, George was most interested in the movements of gymnastics, not symphonies; he won state and national competitions when he was in high school. 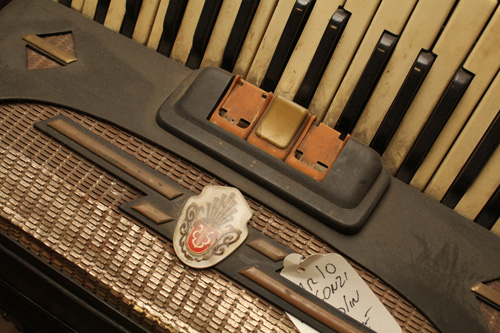 "But music was always in the background," he says. "In 1966, my mother brought me a bouzouki back from Greece, and I went to the library and got books on music theory. I taught myself to play and read music."

The lessons took: George plays bouzouki, guitar and bass and has been a professional musician ever since high school when he started the band The Trojans of New York, which still plays at weddings, parties and corporate events nearly every weekend.

George playing with The Trojans of New York.

Science also was a star of his imagination, and after earning a master's degree in aerospace from The City College of New York, he became a NASA engineer.

"I was sent all over the world, including Iceland and Chile, to troubleshoot," he says. "I could be gone for two months at a time. I loved the job, but I wanted something with a more stable schedule." 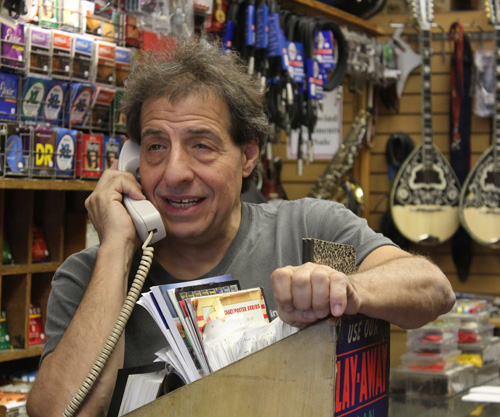 Photo by Nancy A. Ruhling
George manning the shop phone.

He was a constant customer of Astoria Music, and when he found out the owner, the grandson of the founder, was going to retire, he offered to buy the business.

George was taken by its history: Back in the day, it also housed a recording studio, and it was frequented by everyone from Tony Bennett, Ella Fitzgerald, Ethel Merman and Lena Horne to Louis Armstrong, Glenn Miller, Dizzy Gillespie, Woody Herman, John Coltrane and Milt Hinton. 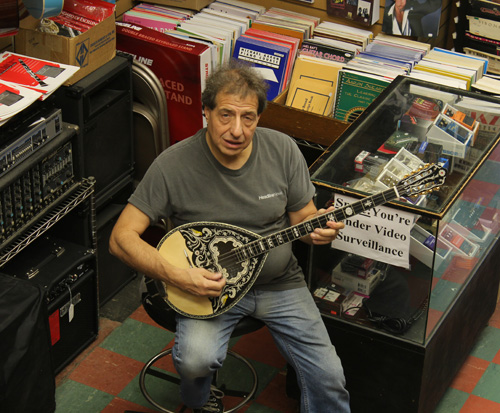 The shop, long and narrow as a drumstick, looks much as it did when the Badgetakis family opened it. The Christmas-y red and green checkered linoleum, made shiny by the tread of time, is original, and the old wooden counter, where the vinyl LPs and 45s used to be displayed, holds packets of strings. George did all the updating himself, sleeping on an old sofa in the upper-level storage area for three months until he got it done.

He's got running the shop down to a routine. He's always been closed on Sundays and Mondays because The Trojans of New York, which bills itself as offering "the ultimate in 'live' Greek and American music," does weekend gigs. 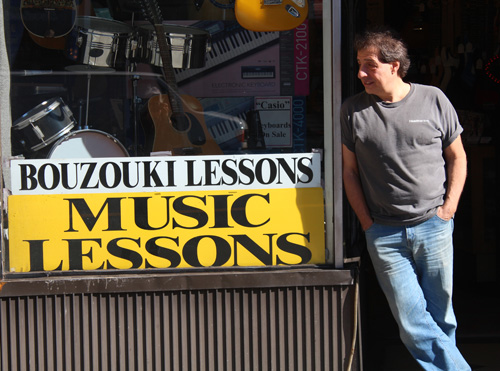 Photo by Nancy A. Ruhling
George still plays in a band.

"Sometimes I wasn't getting home until 4 a.m. on Sundays," he says. "Even God rested one day."

George recently turned 60, but he's just as excited about Astoria Music as the first day he jingled the keys that open the store's front door. 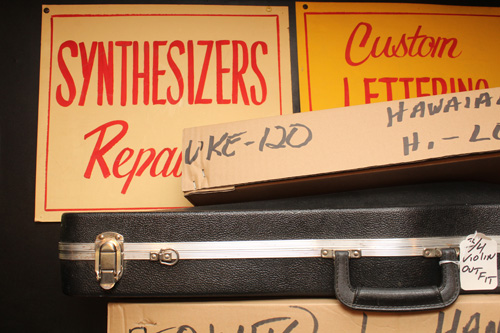 Photo by Nancy A. Ruhling
Boxes in the storage room.

Although his two daughters are not interested in carrying on the business, George, who looks as fit as an iron-pumping teen, figures he has at least a decade left before he plays his finale.

The Trojans of New York, though, that's another story. He's no Mick Jagger; 45 years is a really, really long time to keep playing. 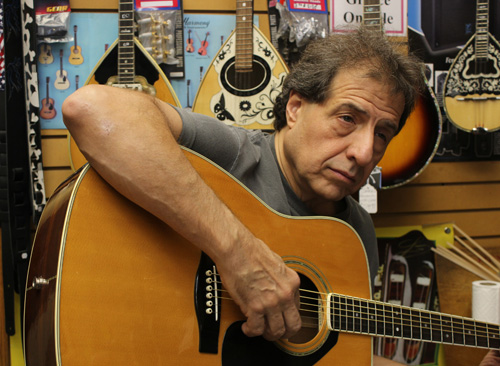 Photo by Nancy A. Ruhling
He's always ready for an encore.

"I'll give the band two or three more years," he says. "I want to leave it when I'm still able to play at a professional level."

Of course, he could change his tune. He could win the lottery. You never know: That's why he keeps his first bouzouki hanging in Astoria Music's window.

He says it brings him good luck.