It's an ordinary white garage door, but when Lady Pink rolls it up, the eyes, surprisingly, are assaulted by a kaleidoscope of color.

In this space, which was built to house two cars, Lady Pink, The Grandmother of Graffiti, makes her studio.

Lady Pink, of course, is her artistic name. The name she was born with? It's irrelevant -- you wouldn't ask Cher this question or expect Madonna to answer to anything other than the M word. 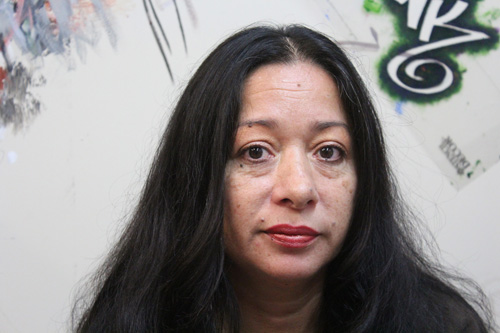 Photo by Nancy A. Ruhling
Lady Pink -- Pink to you -- is The Grandmother of Graffiti.

Pink, petite and peppy, is no powder puff. Don't be fooled by all the silly, frilly girly pink she puts on. (Picture her in her pink fleecy leopard-spotted jumpsuit jammies with the footsies and her hot pink feather boa slung over her shoulder like a trophy.) Putting it politely, she's a powerhouse.

"I do turn into a scary she-dragon at most guy-dominated job sites," she says, adding that she's particularly partial to purple, the color of queens. "So I've been told."

She may be picky about her moniker, but it's not because she chose it. The Lady part, yeah, she came up with that when she was in high school. She was entitled to a title, so she swiped it from the romance novels she couldn't keep her nose out of. 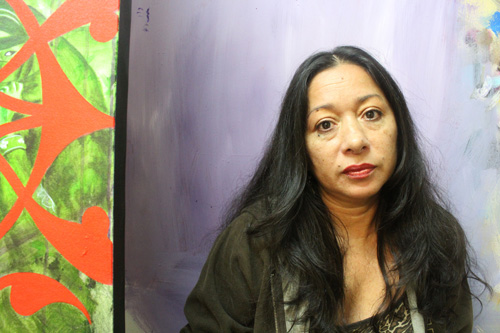 Photo by Nancy A. .Ruhling
She spray-painted her first subway car at 16.

"I was the coolest kid in class," she says, tossing back her mane of raven-Rapunzel hair, which used to reach to her rear but now only hits the middle of her back. "I was like royalty; I could snap my fingers and someone would bring me lunch."

But the Pink part was bestowed upon her by her fellow graffiti artists.

"I was the only girl in a crew of 10,000 in New York City," she says. "They told me I had to have a girly name. For graffiti artists, the letters of the name have to look good for your signature. With Pink, the 'K' kicks out and the 'I' can be dotted with all kinds of symbols like hearts." 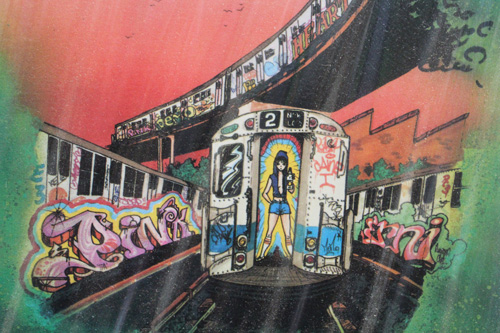 Photo by Nancy A. Ruhling
One of Pink's early works.

Pink spent the first seven years of life in Ecuador, where her mother was the mistress of a very important person. Let no more be said than that he was an architectural engineer who became a senator. When the affair ended, she brought Pink and Pink's older sister to Astoria, where she had a couple of relatives.

Born with a wet paintbrush in her mouth, Pink found her inner graffiti artist at 16. She was a student at the High School of Art & Design when she began painting subway cars and exhibiting at galleries.

Every other weekend from 1980 to 1985, she lowered a bag of paint to the ground and jumped out of her bedroom window so she could head to the trains. She spray-painted her way through the nights, sometimes hiding out in bushes so the cops wouldn't stop her. Her capers got her a starring role in the first hip-hop movie, 1983's Wild Style. 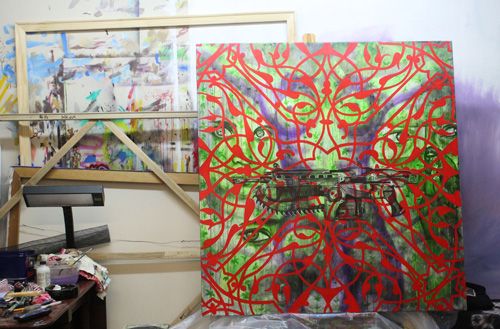 Photo by Nancy A. Ruhling
Pink's colorful studio is in a converted garage.

"There was an element of danger -- the trains were in the ghetto," she says. "I did it for kicks and giggles and for the excitement of adventure."

It didn't bother her that her art was quickly erased.

"Graffiti artists learn not to get attached to their work," she says. "When you put up a public work, whether it's on a subway car or the wall of a building, you kiss it good-bye." 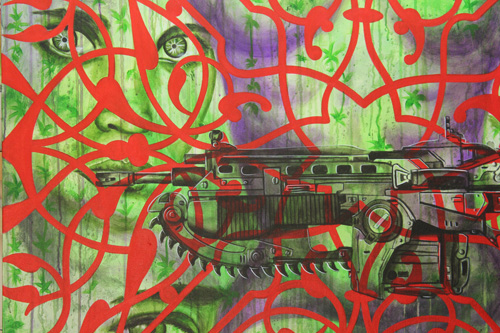 Photo by Nancy A. Ruhling
A section of one of Pink's new paintings.

When she was 21, she enrolled in an elite art school but dropped out after half a semester.

"It was like starting over," she says. "The other students were only 18 to 19 and had never taken art classes. I had traveled around the world and had been exhibiting in different countries since I was 16."

By that time, with her reputation solidly established, Pink began focusing solely on her paintings, which sell for five- and six-figure sums. You can see some at the Whitney Museum of American Art, The Metropolitan Museum of Art, the Brooklyn Museum and the Groninger Museum in The Netherlands.

These days, the closest she gets to a subway car is when she works with students from the Frank Sinatra School of the Arts to create murals for the Amtrak underpasses that hold up the Hell Gate Bridge. 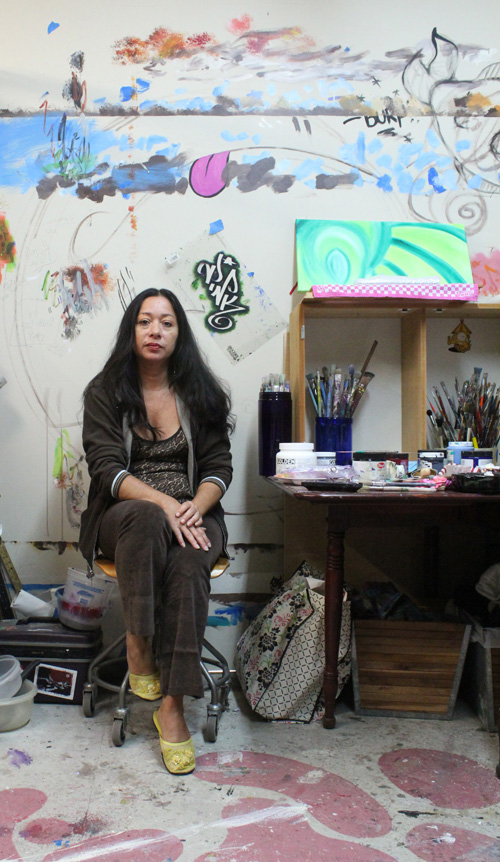 Up until this year, she and her husband, who also is a graffiti artist, ran a mural company -- "that's how we survived as artists" -- but they quit when he became a subway train operator.

"This is the first time in 32 years that I've taken some time for myself," the 48-year-old Pink says, adding that she still donates work to charity and will continue to make murals with high school students. "I'm looking forward to concentrating on my paintings again."

Between creating artworks and being a role model for young female graffiti artists, she sometimes feels overwhelmed. 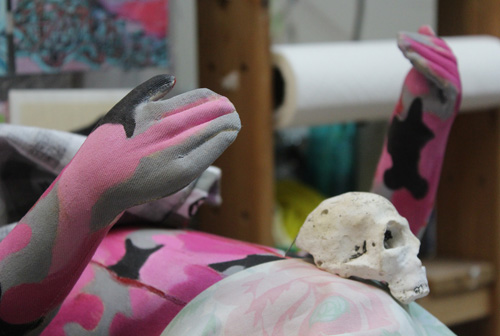 Photo by Nancy A. Ruhling
A baby doll and skull sculpture in Pink's signature pink.

"There's no room for failure," she says. "I have had to maintain a quality of brilliance all my life. The pressure is crushing. It's difficult to keep up year after year."

Pink's work has a social edge that cuts like a papier-mache machete.

"My inspiration comes from real-life experiences and emotions," she says. "I tackle social issues like gay bashing and women's equality." 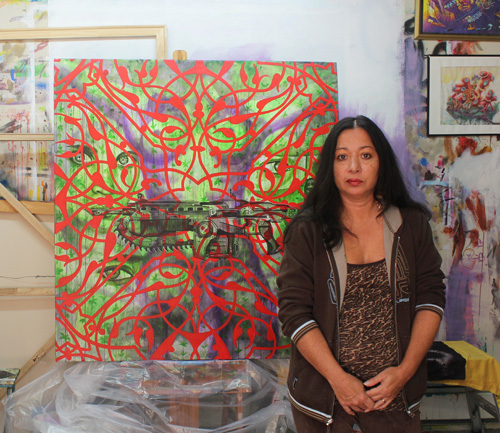 Photo by Nancy A. Ruhling
She doesn't miss her subway car days.

"My paintings are heavy," she says. "I don't want to gross people out, but I do want to get my messages across. I like to do pretty stuff; even if I have a tank squishing a bunny, the bunny is cute."

When Pink's not painting or thinking of putting brush to canvas, she's playing video games like Gears of War with her husband. They don't play against each other.

"We're a team," she says. "Shooting each other didn't seem right. Nothing says love like your husband giving you all his ammo when you're in a tight spot." 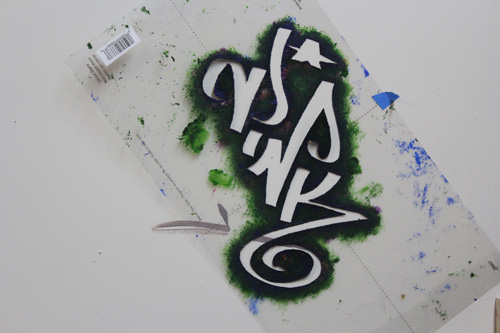 Photo by Nancy A. Ruhling
Pink's signature says it all.

Lately, Pink's time has been taken up with domestic duties -- she just finished renovating an apartment in her house for a new tenant -- but now that they're done, she's looking forward to hitting the studio 7 a.m. to 11 p.m.

When she's there, she turns the stereo on full blast -- rock and pop but no hip-hop -- and throws some dirty clothes into the washer and dryer she's installed in the corner.

"I want to be the next Georgia O'Keeffe," she says.