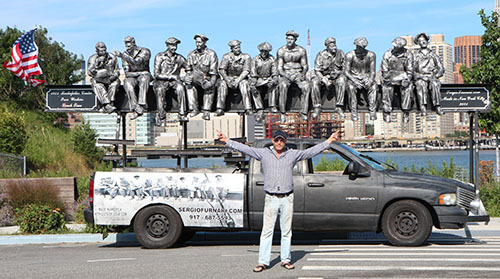 Photo by Nancy A. Ruhling
Sergio's Lunchtime atop a Skyscraper.

Sergio climbs into the cluttered cab and drives toward the East River. When the skyline comes into view, he stops the engine and scales the scaffolding to take a seat with his pals on the I-beam.

He unfurls the flag and lights a Marlboro. 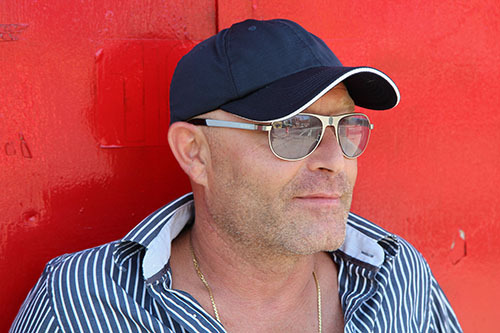 It doesn't get any better than this.

In case you don't know it, Sergio, sculptor/producer/dreamer, is the guy who created a 3-D version of the 1932 black-and-white photo Lunchtime atop a Skyscraper that shows 11 men of steel suspended in the air at the RCA Building at Rockefeller Center.

After 9/11, he made a life-size copy, aka Lunchtime atop a Pickup Truck, and drove it around and across the country to make a patriotic point. 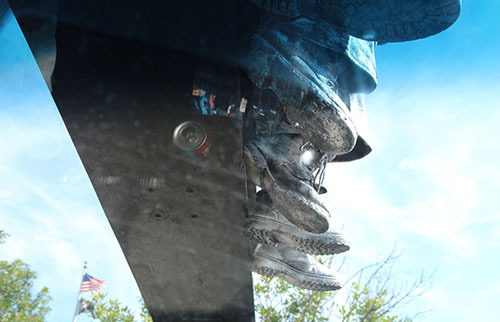 Photo by Nancy A. Ruhling
The view from Sergio's front windshield.

"The 11 guys and I, we put 57,948 miles on the truck," says Sergio, who hides his Bruce Willis hair under a baseball cap and shades his green eyes with grey-tinted glasses. "I have a new pickup, but this one is so full of memories that I don't want to remove the sculpture."

He sees his Lunchtime as a unifying monument to America's invincibility. He had hoped to get a commission from a city to erect a colossal Lunchtime in bronze in a public space. 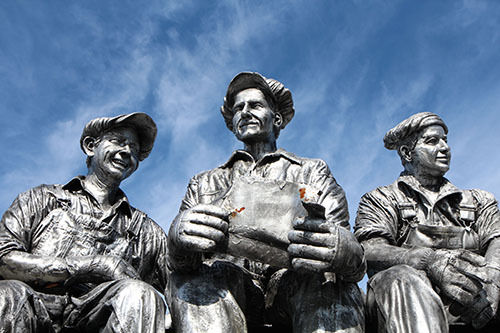 Photo by Nancy A. Ruhling
Taking a lunch break.

When that didn't happen, he started selling shelf-size copies.

Like the men on the I-beam, the 45-year-old Sergio is an immigrant who makes his living with his hands, which are stained with tobacco and paint. 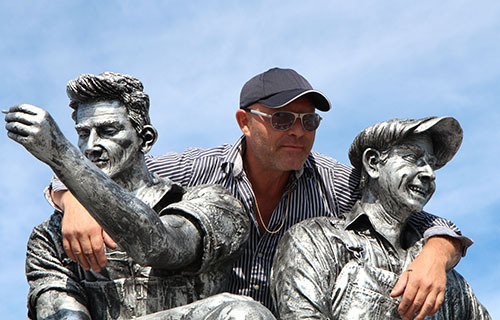 Photo by Nancy A. Ruhling
Sergio with his pals.

A newly minted American citizen, he's from Sicily's Caltagirone, which, since ancient times, has been known for its ceramics.

Sergio, one of five boys, began drawing and sculpting by age 5. By 6, he was sweeping the floors of the local sculpting foundry, where he spent six years honing his skills.

"I believe I was destined to become a master in sculpture and painting," he says. "Even my surname alluded to my fate: Furnari means 'the people who attend the oven with fire.'" 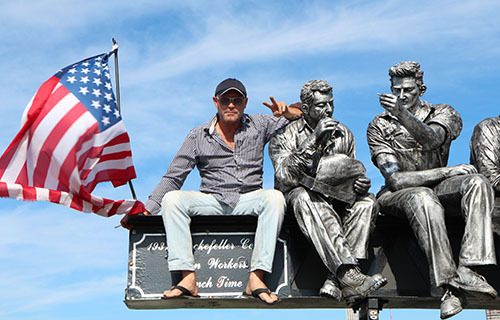 Photo by Nancy A. Ruhling
He's working on a stainless steel version.

As much as he loves Italy, Sergio felt drawn to New York City, which he started calling home when he was 20.

"I discovered that behind the impressive skyscrapers were immigrants from all over the world," he says. 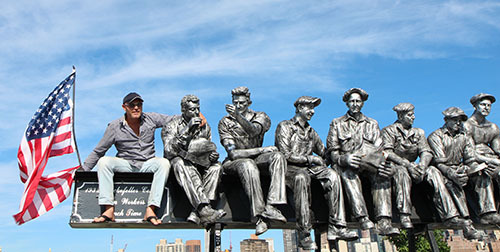 Photo by Nancy A. Ruhling
Feeling right at home.

In the beginning, he designed high-end hand-painted tiles for restaurants and swimming pools.

But his focus was on his own art, and by 1992 he had made his first significant piece -- the Lunchtime sculpture.

"Making art allows me to have peace in my soul," he says. "Once I have created something, it allows me to transmit the happiness I had while I was making it." 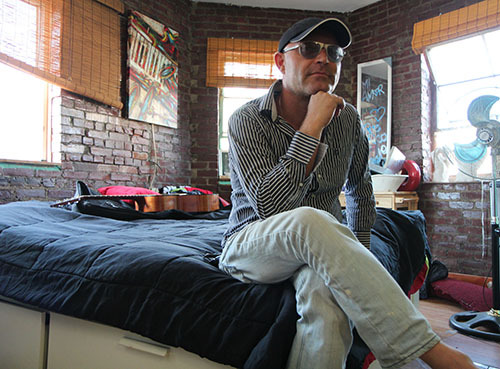 His projects took him all around the world, which was good for his work but not for his wife.

(Sergio was divorced several years ago; his three children live in Savannah, Georgia, with their mother.)

For Sergio, art is life and life is art. 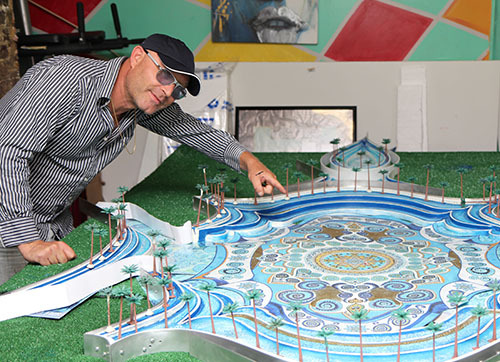 "When you know how to do many things, it becomes difficult," he says. "When I get up each day, I have to ask myself, 'Am I going to paint or sculpt or restore a car.'"

Or make a life-size legacy version of Lunchtime in stainless steel, which is what he's going to start soon.

"I'm a believer, an optimist and a dreamer," he says. "I shape my dreams, sculpt them, draw them and paint them. Once I imagine them, I make them a reality." 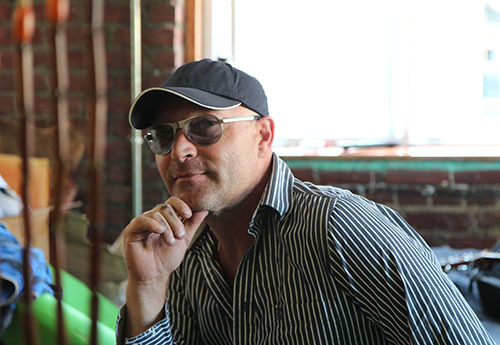 Photo by Nancy A. Ruhling
He makes dreams a reality.

These days, Sergio is all fired up about the world's largest tiled swimming pool, which he has been designing off and on for years.

Made of 30,000 hand-painted tiles, it is the size of two football fields. The graph-paper model, which is on an AstroTurf-covered ping-pong table, takes up half the space in Sergio's Spartan second-floor studio apartment.

"It will be," he declares, "the Eighth Wonder of the World." 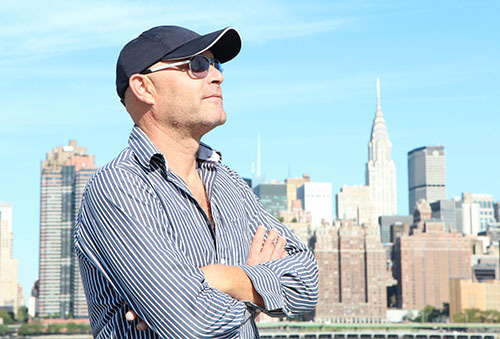 Photo by Nancy A. Ruhling
'My biography is still being sculpted by the universe.'

Everything's all set to go. The tiles, which Sergio hand-painted with a couple of assistants, are in storage in Guatemala. All he has to do is find a buyer who wants to spend $32 million or so.

"I see it in Qatar in time for the 2022 FIFA World Cup," he says, pulling out his iPhone and swiping through photos of the royal family he plans to contact. "I see it as a way to build peace with the Middle East because sports brings everyone together. It will be a city center, and I'm already designing the buildings around it."

He points to the middle of the swimming pool.

"That's where I'll be," he says, putting his finger on a bright orange dot that he pasted there to represent himself.

You almost need a magnifying glass to see it.