It's going to be a good day. Mitch Waxman knows this because he just saw a black cat with yellow eyes. 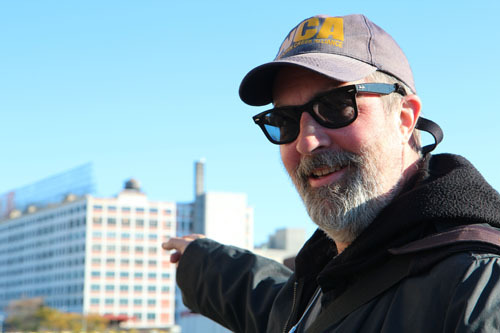 Photo by Nancy A. Ruhling
Mitch on the waterfront.

He's not particularly superstitious, but every time he's crossed paths with a fiery-eyed feline who's the color of midnight, he has persuaded the Newtown Creek to talk to him.

"When I say that it speaks to me, I mean it says things to me because I am informed of its history," he says.

And Mitch, the volunteer historian of the nonprofit Newtown Creek Alliance, is an expert at coaxing out its waterlogged words. 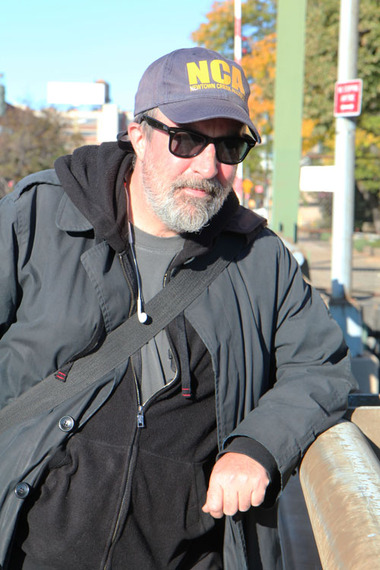 Photo by Nancy A. Ruhling
A heart attack led him to Newtown Creek.

He's standing on the sidewalk facing the Hunters Point Avenue Bridge that crosses the Dutch Kills estuary that is one of the creek's five branches. He's staring deeply into its waters, which are the color and texture of spoiled pea soup.

It doesn't look too polluted today, he remarks, but don't let that fool you. Astoria's sewer, which runs from Queens to Greenpoint, Brooklyn, harbors everything from birth-control pills to steroids, and it's contaminated with typhus, cholera, gonorrhea and other scary things that nobody wants to think about.

"When you put your recyclables on the curb, they end up here," he says. "When you flush the toilet, everything comes here." 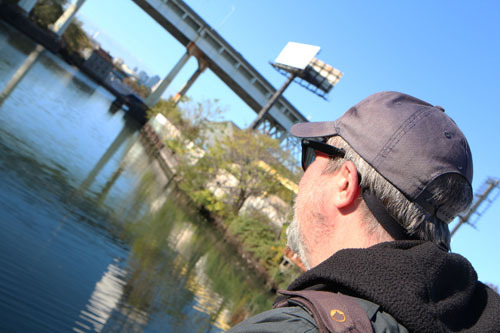 Photo by Nancy A. Ruhling
Looking out at the LIE and Borden Avenue Bridge.

These are things you may or may not know, so Mitch, like a baseball pitcher, throws out some other facts: A century ago, the creek and its immediate watershed supported some 2 million local jobs and carried more commercial traffic than the Mississippi River. Now, it's in one of the last all heavy-manufacturing zones in Queens, and 18,000 blue-collar workers depend upon it for their paychecks.

The cat scats, but Mitch stays put. He cuts a colorful all-in-black figure. With his billowing trench coat, baseball cap and the oversize Ray Bans he won't take off ("I wear sunglasses all the time; nobody recognizes me without them") he looks like a beetle.

His beard is grizzled, his hand holds a cup of black coffee, and he slouches under the weight of his camera and canvas bag.

"I'm a wandering mendicant wearing a filthy black raincoat scuttling along the street, and like every other piece of trash in New York City, I find myself at Newtown Creek," he says triumphantly. 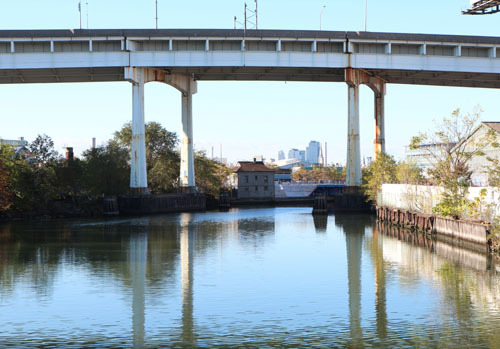 Photo by Nancy A. Ruhling
The LIE and Borden Avenue Bridge on the Dutch Kills estuary.

He dresses for danger. Sometimes his jaunts take him to the creek's underbelly, where he must blend in with the water bugs -- the off-the-radar and off-the-wall occupants of the derelict and decaying buildings.

Mitch has been coming to Newtown Creek for, he thinks, about five years. Although he can account for every year of the 3.5-mile-long creek's life, he's not so good when it comes to documenting his own history.

That he has come to love Astoria is a surprise to him. He was born and raised in Canarsie, Brooklyn, a place he remains passionate about. His grandparents were Jews from the Pale in Imperial Russia. An only child, he was, he says, spoiled rotten. 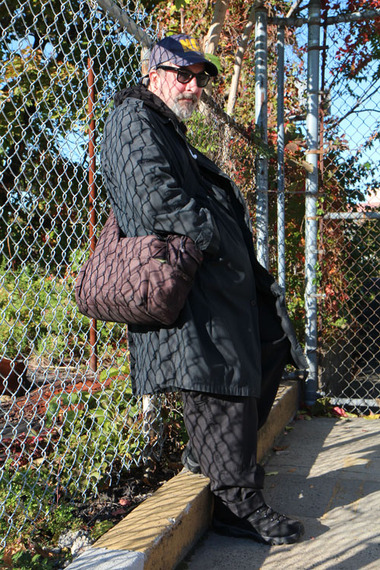 Photo by Nancy A. Ruhling
Mitch blending in with the scenery.

He dreamed of being a comic book artist, and he did, in fact, do that for a while after college. The creative reward was high but the pay was low, so he started working for advertising agencies, eventually becoming a photo retoucher.

About 10 years ago, again he can't be more precise, he and his wife moved to Astoria.

"We were on the Upper West Side, our building was going to be eclipsed by a new tower, and my wife wanted to come to Astoria, where she used to live," he says. "I'm from Brooklyn. I didn't want to live in Queens, but I'll do anything to make my wife happy; this was the best decision I ever acquiesced to."

Mitch got too settled in. 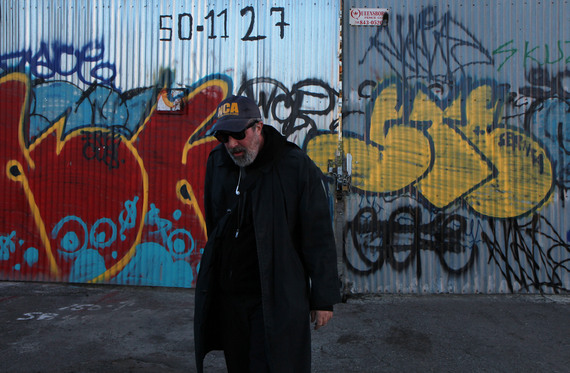 "It wasn't surprising to anyone that I had a heart attack at 39," he says. "The doc told me to run, and I said, 'I'm from Canarsie. The only time I will run is if someone is chasing me.'"

He took up walking instead and ended up at Newtown Creek, which is a little more than a mile from his apartment.

"I knew the water was there," he says, "but when I actually saw it, I went, 'Whoa!' It's a wonderful example of New York City infrastructure, so I was hooked." 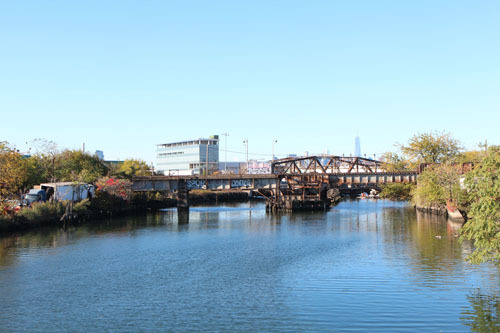 Photo by Nancy A. Ruhling
The LIRR Montauk cutoff rail bridges on the Dutch Kills estuary.

Mitch's interest may have been more than surface deep. It's possible that he also felt an affinity for the fouled waterway because his physical presence was just as polluted: Before the angioplasty, he had been inhaling junk food and smoking a pack of cigarettes a day.

He became an expert on the creek, taking on the post of historian of the Newtown Creek Alliance, creating a blog, taking photos for Brownstoner.com and giving tours.

Mitch is quick to point out that he's not the creek's caped crusader. 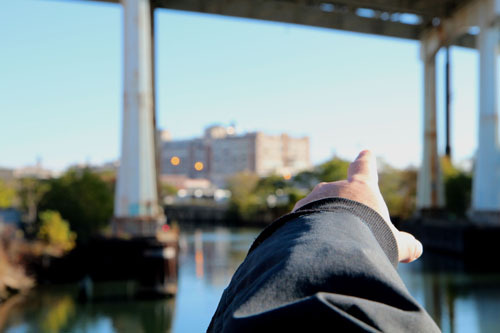 Photo by Nancy A. Ruhling
See that?

"I see my role as presenting facts about the past to people," he says. "I do my research from old newspapers and magazines, not municipal records because municipal records lie. I have no political agenda. What happens to Newtown Creek is not up to me, it's up to you."

Mitch, who is 47, has immersed himself in Newtown Creek's stories. He and his DSLR camera walk the waters two to eight miles a day; his shoes wear out every two to three months. 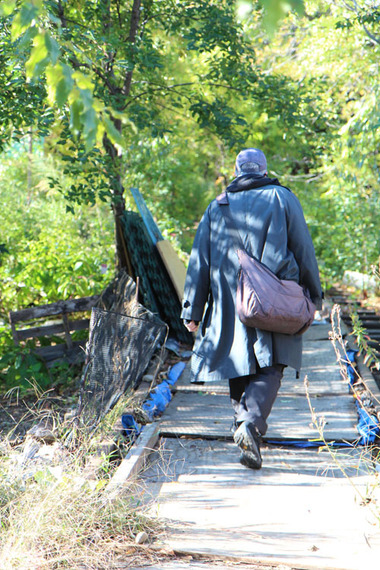 Photo by Nancy A. Ruhling
Mitch off to the next adventure.

Mitch doesn't have an end goal, and that's the whole point.

"I like to see what every day holds," he says.

He just got a new pair of Merrells.