If there's one steady thing that can be said of Gabriela Granados, it's that she can't sit still.

A woman of fluid movement, Gabriela bends her body into a stiff office chair. 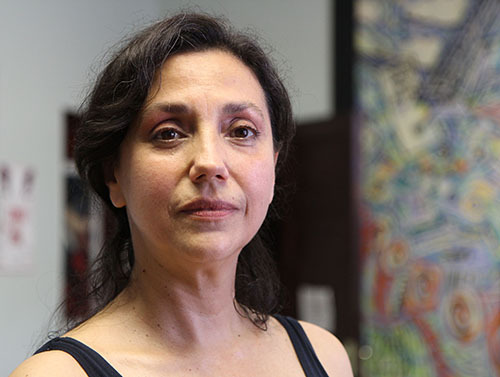 Photo by Nancy A. Ruhling
Gabriela is the founder of American Bolero Dance Company.

Thank heavens it swivels. If nothing else, she can swing her feet from side to side or tap them up and down.

And when they have to stay put, she can propel her arms into flight, jabbing them at the ceiling or crossing them in front of her to make a point.

When Gabriela was a child, her nickname was Gaby. She thought it was merely a shortened version of the moniker she and her mother shared. 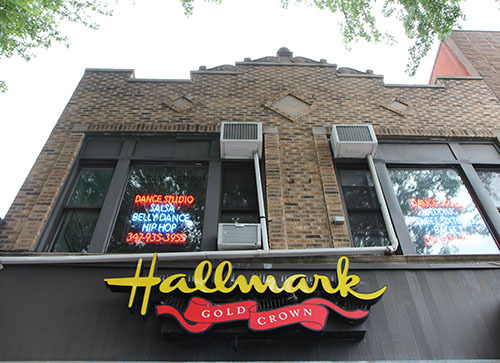 When the family moved to Lima, Peru and she took English lessons as a teenager, she found out that the joke was on her.

Gabby, she explains in a torrent of words, is a synonym for talkative. In her case, she's happy to tell you, it meant "you say a lot for such a little girl."

The little girl she's talking about grew up in Iquitos, Peru, a city in the Amazon jungle, and received her first educational instruction from Franciscan missionaries.

Did you know, she asks, that that is where Werner Herzog shot his 1982 film Fitzcarraldo? 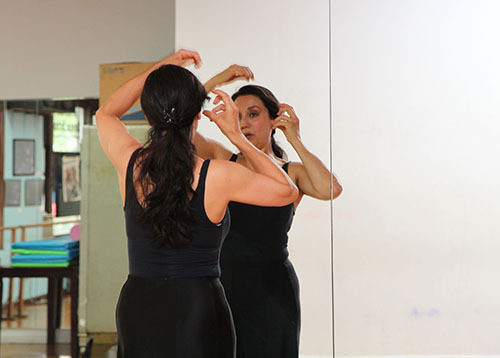 Photo by Nancy A. Ruhling
She grew up in Iquitos, Peru.


"I recognized some of the people in it," she says.

Gabriela has four older brothers, and it was her mother's intention that she follow in their footsteps. That's why she started taking piano lessons at age 4.

"I have big hands and long fingers," she says, holding them up and waving them in circles. "But I was a wired, little hyper monster."

Gabriela squirmed her way off the piano bench and onto the dance floor. She began perfecting her footwork long before any formal training commenced. 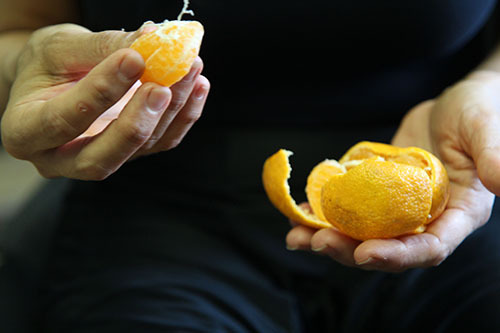 Photo by Nancy A. Ruhling
Her hands are always active.

"I used to memorize and recite long passages of poetry before I could read," she says. "It was the same with dancing: I didn't know how to play the castanets, and I held them like weapons."

She demonstrates, flamboyantly flinging her hands up and cupping them. 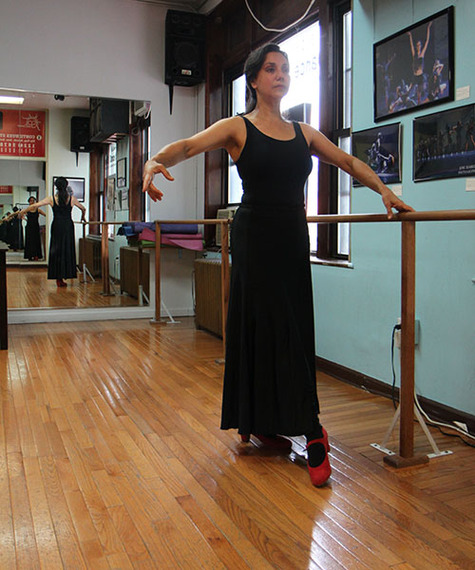 "I always knew that I wanted to be a dancer," she says.

Although she spent a couple of years in college, her feet were elsewhere.

Before turning 20, she married a British man who took her to live in London then New York City.

"I was very excited to study dance in Manhattan," she says. 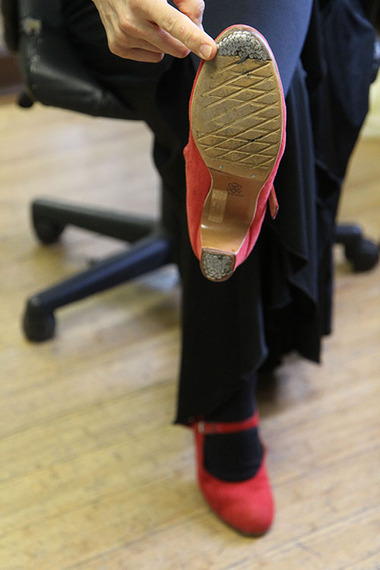 Photo by Nancy A. Ruhling
Ready to dance.

She supported herself by doing a variety of jobs, playing secretary, waitress and receptionist in numerous productions.

After her divorce, she went to Madrid, Spain and made her debut in the tablao flamenco Los Canasteros.

When her European tour ended, she became a member of several U.S. flamenco companies and also made a name for herself as a choreographer.

In 1996, she established the American Bolero Dance Company to promote Spanish dance, notably flamenco, 18th-century bolero and Zarzuela, in the United States. 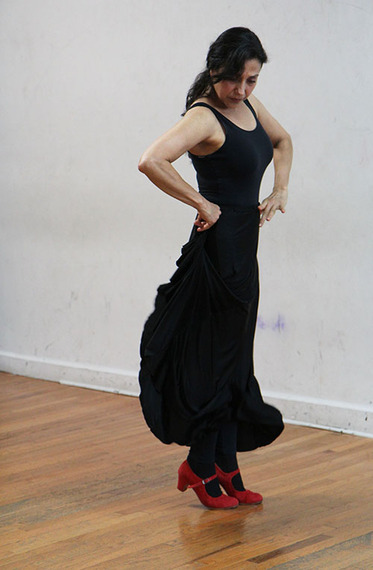 It was her current husband, opera singer Peter Castaldi, who encouraged her to form the nonprofit company, which is funded mostly by grants.

"He knew it was my burning ambition and desire to do this," she says.

Dance, though, isn't easy on the body or the budget.

Gabriela, who is 55, has suffered a variety of injuries, most recently a fractured foot. She fell on the sidewalk and had to wear a special shoe and use crutches then a cane. 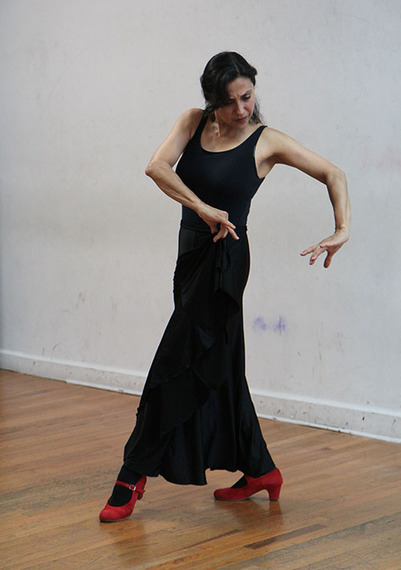 "See, it's fine now," she says, tapping her red-suede shoe on the wooden floor.

She also has spondylolisthesis, a condition in which the vertebrae in the lower back press against the nerves.

She's going to start physical therapy in the hopes of skipping surgery.

To raise money for the company and its sister unit, the Spanish Dance School that is dedicated to the preservation of the dance forms she revels in, Gabriela teaches dance at Sol Dance Center three times a week. 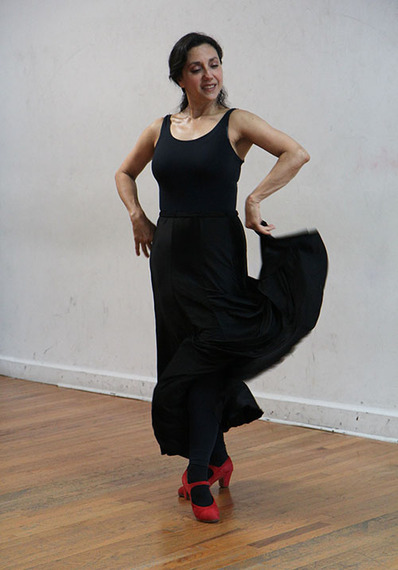 At this point, there's nothing else to do with her hands, so she begins peeling a clementine and popping sections into her mouth.

Students -- and studios -- are rare in Astoria. 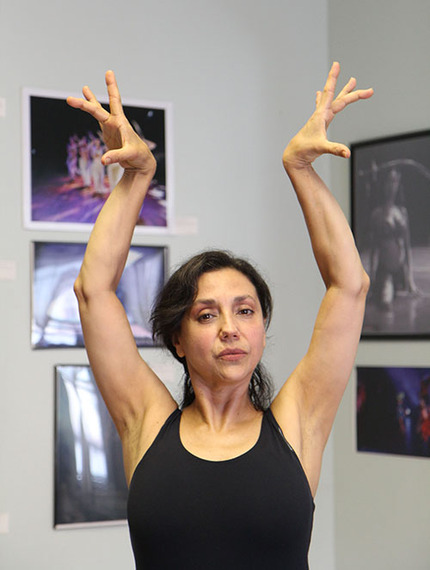 Photo by Nancy A. Ruhling
Finale.

Gabriela rehearses three to four hours a day, takes a break then teaches. Of course, when she's working on a production, she practices much more.

"I find the gym boring," she says. "But I go there to do yoga, stretching and weight lifting."

She offers a clementine and in between bites talks about choreographing operas like Carmen and La traviata that have a Spanish theme.

Right now, though, her next act is in the next room. Her students are waiting for her.