At the end of Hazen Street, where the cars on Astoria Boulevard whoosh by like rockets, a garden center grows. Verni's, as it is called, is shaded by a green awning that is the color of a woodland forest.

The sun is out, the plants are panting for a cool drink, and Frank Verni puts down his breakfast, a bowl of cold cereal, and takes up the hose. He and his brother, John Verni, divide up the daily duties, and he is the water boy.

"To do it right," he says, "you have to go up and down every aisle and coordinate it so you don't miss any. It takes me eight hours." 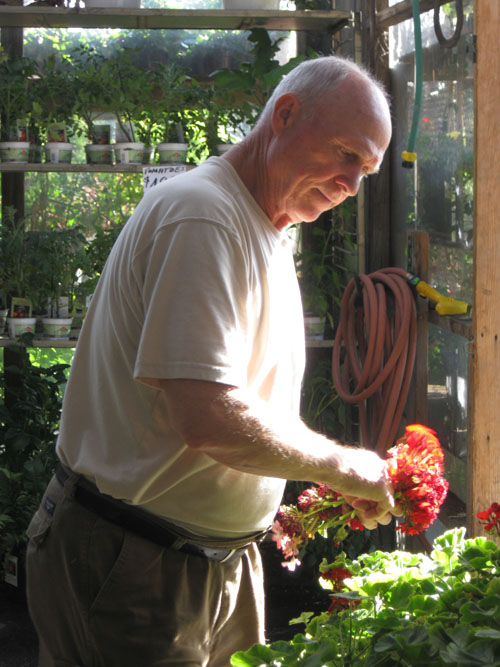 Photo by Nancy A. Ruhling
Frank tends to the geraniums.

The brothers Verni have been a team for four decades, and they have been in the garden center business for 30 of those years. Frank, the older, is the quiet one; John does most of the talking.

"John's better at it than me," Frank says as he hauls the hose to the back.

Frank and John, the sons of farmers, hail from Bari, Italy. "We cultivated olives and almonds," John says. "We started doing chores like carrying water and working in the fields when we were 8. Frank was contracted out to another farmer at that age. In those days, nobody thought anything of it. People had kids for one reason -- to help out."

In 1958, when Frank was 14 and John turned 12, their parents settled them, along with their older brother and three sisters, in Canada. Frank worked in a book-binding factory then an embroidery factory. John became a delivery boy for a coffee shop. They picked up their unaccented English along the way.

In 1962, the family immigrated to New York, choosing to live in Astoria because of its large Italian population. "America was the land opportunity," John says. "We came to try to get rich. But it didn't work." 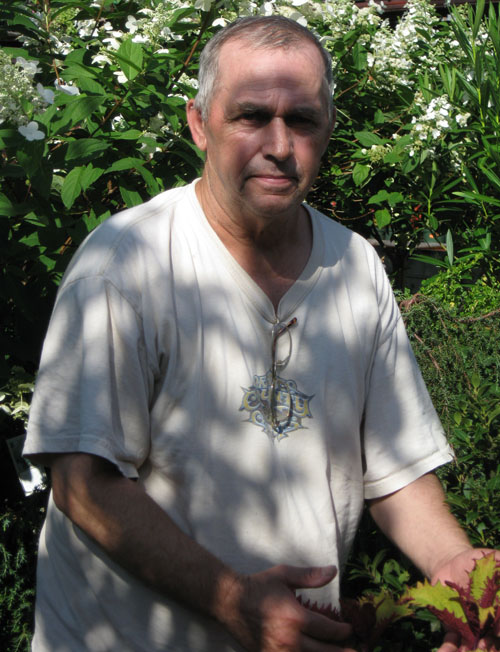 Photo by Nancy A. Ruhling
John loves every season of the garden.

They opened a grocery, where Frank and John worked with their father. While John joined the Army for three years -- he was stationed in Colorado, not Vietnam -- Frank worked at the grocery. In 1970, the brothers became business partners and opened a fruit and vegetable store at 21st Street and Astoria Boulevard. In 1980, they turned it into a garden center, and in 1985, when they lost the lease, they moved it to Hazen Street.

By then, they had become American citizens. "That was very exciting for us," John says, "because we were happy for the opportunity to come to this country."

Verni's, which is across from a lumberyard, is 12,000 square feet, the size of six residential lots. The rest of the block is houses.

Verni's is open seven days a week, 7 a.m. to 6 p.m., 364 days a year. (New Year's Day is the only time it's closed; sometimes Frank and John take off a few days here and there but never together.) It sells everything from potted orchids to fig trees and Christmas trees. (More photos.) 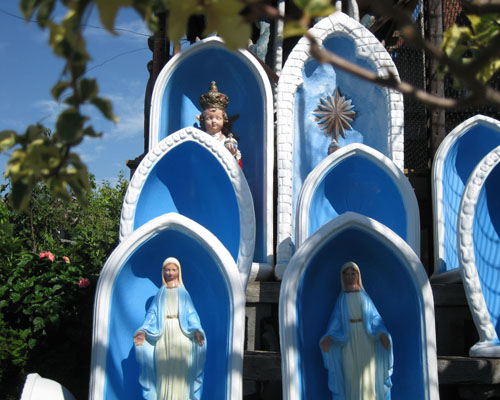 Photo by Nancy A. Ruhling
Garden statuary runs toward saints and virgins.

Frank and John started out leasing the space; after several years of saving, they bought it and paid it off five years ago. "It's not a lot of property, but it's big enough for me and my brother," Frank says.

The balding, bronze-skinned brothers buy their plants from nurseries. "To grow them here, in the city, you'd need a lot of land," John says.

Tending to Verni's doesn't leave them time to do much else, but that's OK.

Adds Frank, "I look forward to coming here every day. I want to be here."

Frank and John, who are grandfathers, run the center by themselves. Louie Verni, the grey and white cat, helps them out when he feels like it. 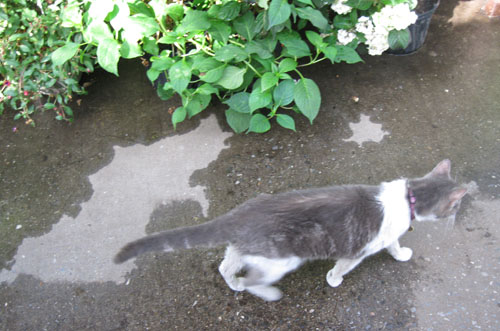 Photo by Nancy A. Ruhling
Louie makes his daily rounds.

"We didn't become millionaires," Frank adds, "but we live comfortably."

There's no bud on the Verni family tree waiting to take over the center. John and Frank's children are grown, and the grandchildren, well, they're not near old enough. Although they are retirement age -- Frank is 67, and John is 65 -- they have no intention or desire to do anything else.

Frank has a stent in his heart, and John recently survived a bout with cancer, but they're still walking, so they figure they have at least four to five years left. 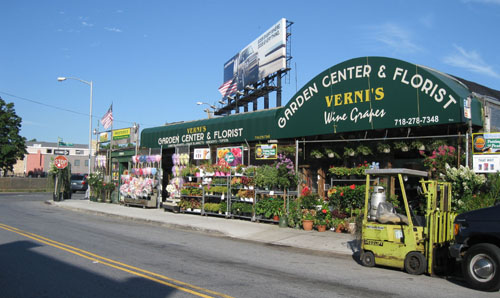 Photo by Nancy A. Ruhling
Verni's brings a bit of green to the block.

A silver-haired woman walks in. "Hi, honey," she croons to John. "Those tomatoes were beautiful!"

"Another satisfied customer," John says and smiles. "That's what I like."