Soft music plays, crystal chandeliers sparkle like diamonds in the dimmed light and candles fill the air with the seasonal scent of bayberry.

"What can I get for you - wine, lemonade, filtered water?" asks Timothee Faberger. He stands at attention, smiling as if getting the answer is the only thing in the world that matters.

Timothee, flight attendant/caterer/tour guide, has made a profession of making guests feel at home whether they're at his three-family house in Astoria, a party in an exclusive Manhattan loft or in Russia on a river cruise.

Like a metal detector that reaches below the surface to pinpoint hidden treasure, he discovers their wants and their whims before even they know what they are. Perhaps it's because he feels most at home when he's not at home. 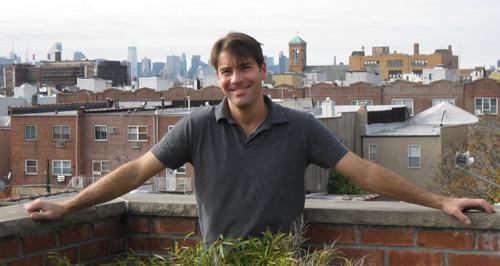 Photo by Nancy A. Ruhling
For Timothee, there's no place like someplace that's far-flung.

"I'm a Sagittarius, so I love to travel," says Timothee, whose French accent and good looks arm him with the charm of a matinee idol. "I don't feel attached to my house. If I had to move, it would be no problem. I would simply start over and recreate what I have here."

He pulls a barstool up to the granite island in the kitchen and pours a glass of French white wine into an elegant fluted glass. Timothee's adventurous life has taken him all over the globe. So where do we begin?

Let's start in Paris. Timothee was born in The City of Light, and for his first 18 years, after his parents divorced, he lived in a modest seventh-floor walkup with his mother, his older sister Clara and Flip, a little dog that looked like RCA's Nipper.

While he was studying hotel and restaurant management, he took what was the first of many international assignments that radically changed his life. His journey began when he was tapped to be a waiter at the French Pavilion in the Epcot Center at Disney World in Orlando, Fla.

"I and my co-workers represented France in America," he says proudly. "I liked America so much that I wanted to come back after my one-year contract ended."

Alas, he returned to that most un-American of cities, Paris. But it was not to be; after a couple of months, he was dismissed by his restaurant for the unforgivable crime of breaking a saucer. It was, shall we say, his lucky break because it took him to the Hill Country of Texas, where he worked for a country club.

"This was the days before the Internet, and I used all my money to take correspondence courses to study the hospitality profession," he says. "In addition to my job, I was cleaning houses and boats and mowing grass to earn enough money to stay."

Through a series of connections, he wound up with a job at a ski resort in the Swiss Alps then spent six years working on cruise ships. "I held a variety of jobs, and one of them was as a group guide," he says. "That eventually led to my setting up my own travel company."

When he decided to return to land - he met his significant other, a dancer who makes his home in New York, in Tasmania while he was on a world cruise - he joined the staff of Feast & Fêtes, Daniel Boulud's catering company, and two years ago also became a flight attendant for Delta Air Lines.

"I like all three of my jobs," he says. "It's hard to choose among them, but if I could only do one thing, I would focus on my trips."

Ah the trips! China, New Zealand, Russia, Germany, France, Holland, Italy, India, Turkey and Portugal - they all have been on Timothee's Out of This World Travel map (www.outofthisworldtravel.net).

"I've done South African safaris and sail boating in Turkey, where we each had a luxury cabin and personal chef," he says, a wisp of wanderlust in his voice. "We don't do the standard tourist things. We discover local people and stay in private residences. Each trip is very personal and designed for a specific set of people."

It was on one such journey - to Russia - that Timothee stumbled upon a bit of his own family history. Faberger, his surname, is the French equivalent of the Russian Fabergé, as in the fabulously famous Fabergé eggs. "My great-great-grandfather's name was Charles, which is the French version of Carl, as in Fabergé," Timothee says. "I met members of the Fabergé family on this trip, and we are convinced that Charles was the illegitimate son of Carl."

It happened like this. In the 1870s, around the time Timothee's great-great-grandfather Charles came into this world, Carl Fabergé had been sent to study jewelry design in France. Charles was taken to an orphanage at birth. "In those days, that's what unmarried women did," Timothee says. "He was named Charles Faberger by the mother; that's the French version of Carl Fabergé."

That's all that is known, he says and shrugs.

Time traveling like this is all well and good, but there are real-time places that Timothee is trying to fit into his timeline. He'd like to see Machu Picchu. The Galagapos Islands also are at the top of his to-do list.

"I don't want to live in New York forever," he says. "I'd love to live in a place high in the hills that has a view of the ocean."

As he sips the last of his wine, he gets a faraway look in his eyes. "Actually, I don't want to live in one place full time," he says. "Perhaps I would pair Paris with some ski resort."