At the checkout counter at Bartunek Hardware, right next to the buzzing key-copying machine, there's a framed black and white photograph. Among the nuts and bolts of this Astoria institution, it's not easy to spot. It's quite likely that most people don't notice it, because if they did, they'd do a double take.

The H stands for Henry, who founded the business in 1925, and Henry looks a lot like Gary. Gary is Gary Bartunek, Henry's grandson and the guy who has been standing behind the counter since 1977. 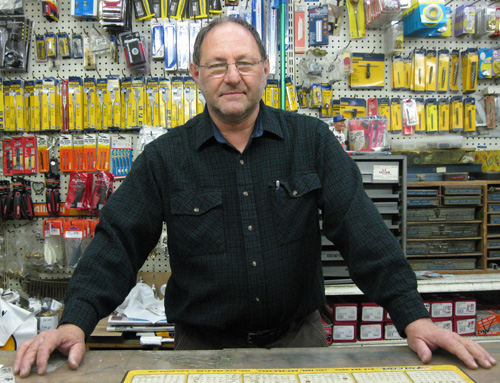 Photo by Nancy A. Ruhling
When it comes to hardware, Gary uses a soft-sell approach.

Gary got his counter spot from his father, Edward, who was born the same year as Bartunek Hardware and who waited on customers until earlier this year when he died at age 84.

Gary knows this hardware store, one of only two in the immediate neighborhood, better than he knows himself. His grandparents lived in the apartment above, and his parents bought the adjoining attached rowhouse. The basements are linked by a steel door, and Gary, as a youngster in the 1960s, spent his spare time happily shooting baskets in the back cement courtyard just as his father did.

"We're from Czechoslovakia, but three of my grandparents were born here," says Gary, a mild-mannered man whose demeanor would center the bubble in the most sensitive level. "My grandfather got the idea to open a hardware store because someone told him that houses were being built here."

Gary climbs down to the double basement, the worn wooden steps sagging slightly under his weight. In an alcove, there's a windowless, closet-size office outfitted with a swivel chair. This is where Gary does the paperwork and reads the Daily News and Post, surrounded by floor-to-ceiling shelves stocked with everything from 5-cent screws and $12 wooden toilet seats to $240 drain snakes.

"Everything today is sold in packages," he says, a tinge of regret in his voice, which is as soft and sweet as pink cotton candy. "I remember when you could buy one nail."

Gary, like his father, is a locksmith -- "we make 100 to 150 keys a day; people always seem to lose them" -- and the store specializes in threading pipes and re-screening screens. "I've had some of the same customers for decades," he says. "People like my prices. My granddad used to say, 'You can't eat this stuff.' I'm not looking to make a big sale; I don't think my dad or my granddad was looking for a big sale. I'm looking for returning customers."

Gary can't pinpoint exactly when he got hard-wired into the hardware store, but he remembers one experience in particular. Gosh, he must have been about eight. "A customer said, 'Thank you,' and I replied, 'You're welcome.' My grandmother was standing there and said, 'Gary, you've got it wrong. You - not the customer -- are supposed to say thank you.'" 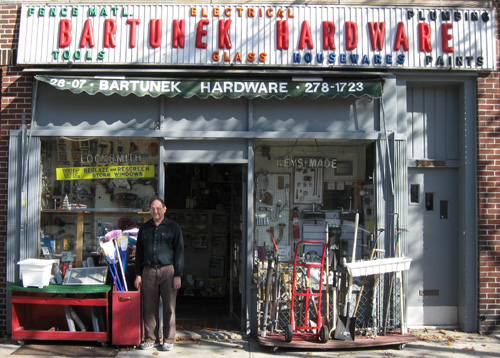 Photo by Nancy A. Ruhling
The store has been selling everything -- and the kitchen sink -- since 1925.

Gary literally owes his life to the hardware store. Around the time Henry opened Bartunek, another guy on Steinway Street had the same idea. The other guy was a plumber who didn't know beans about hardware, so he sent his son, John, around to the hardware stores in the area with this proposition: I will work for free if you teach me the business. Henry was the only one who said yes. When Edward Bartunek returned from World War II to help Henry out, John set him up with his sister, June. They walked down the aisle (of the church, not the hardware store). Gary is their oldest son.

Gary went to school to become a draftsman and worked in that trade for a couple of years. Then he worked in his Uncle John's hardware store on Steinway Street. In 1977, when one of the Bartunek workers died suddenly, Gary filled in and stayed.

Now, Gary's the sole proprietor. He starts his day at 6:45 a.m. in his basement office and opens promptly at 7. He closes at 6. It's a six-day operation, but he has a few part-timers to get him through the busy times.

Gary, it seems, has come full circle. Things are the same, but they're not the same, if you know what I mean. He lives in Astoria but not in the house next store to the shop. And he hasn't shot any baskets out back for as long as he can remember.

Bartunek Hardware's one of the older mom-and-pop shops in the neighborhood. It's hard to say how much longer it will be around. Gary's two children are grown but have shown no interest in joining him.

"Maybe my nephew will take it over," Gary says as he gets knee-deep in a discussion over levels with a customer.