Tigers and tiger lilies. Screaming skulls and beautiful butterflies. Dragons and devils. Jesus Christ and Chryslers. The Mona Lisa in a mustache.

Andreana Verona flips through the images in the black loose-leaf book that holds her portfolio. The owner of Supernova Tattoo, she's been a tattoo artist for nearly two decades. She's inked everything imaginable.

She has the body of a ballerina, a perky ponytail, a tiny rhinestone-studded labret below her lip, a demure silver flesh tunnel inside her nose and several piercings in her ears, most of them unadorned.

What she doesn't have are tattoos. OK, she does have one 8-inch egret that soars from her right ankle to her shin. But that doesn't really count. She did it when she was in training and never finished it. 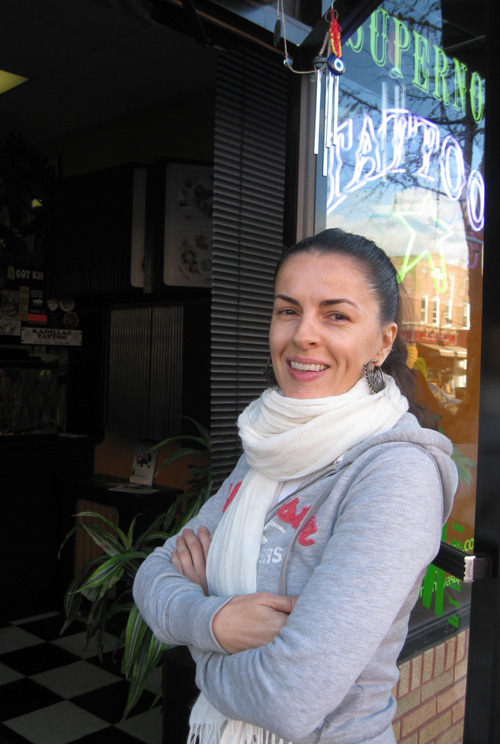 Photo by Nancy A. Ruhling
For Andreana, ink is the ideal medium.

"I put my foot up on a table at my parents' house," she says, lifting her leg onto the counter to demonstrate. "It was an easy area of my body to reach. I never did more because I like a lot of different things. I never could decide what I wanted."

Supernova Tattoo looks like a cross between an artist's studio and an old-time hair salon. Up front, displays of designs are mounted on the walls, which are plastered with a collage of tattoo bumper stickers.

The design books are mostly for show; Andreana specializes in custom work. A pair of floor-to-ceiling wooden statues of Hindu gods -- one of Khrishna, the other of Saraswati -- lead to the studio, where clients sit in barbershop chairs while incense burns, music plays and two aquariums of giant orange goldfish flash their willowy tails. 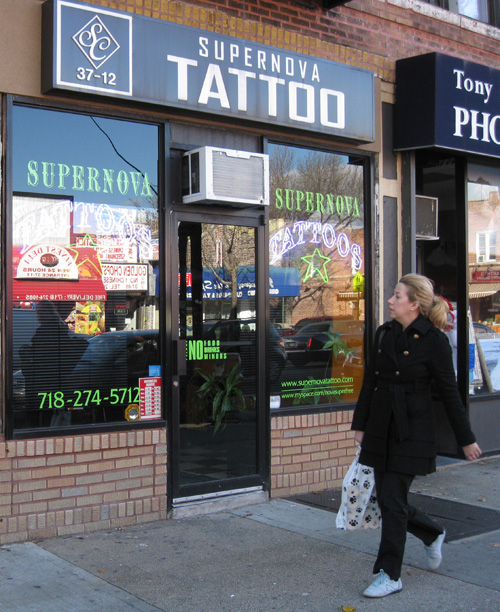 Andreana pulls on black surgical gloves and pulls out a tattoo machine. It looks like a gamma ray gun from a bad 1950s Hollywood sci-fi flick. With the skill of a neurosurgeon, she inserts a long, sterilized needle into its cylindrical chamber.

Her first client, a dude on a Ducati, walks in, helmet in hand, as she lines up her inks on the counter. They look like the tiny toothpaste packets the dentist uses.

The dude is wearing black leather pants. His right arm is covered with a dragon, a skull and a dagger -- work he had done before he met Andreana. His left arm, where Andreana will be working, bears seven crosses, one for each of the seven deadly sins. From the elbow to the wrist, it has room for the medieval crusader Andreana is going to add. 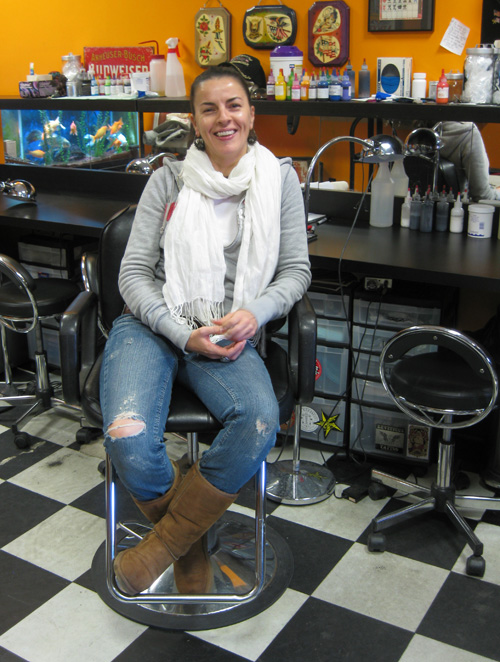 Photo by Nancy A. Ruhling
Andreana's parlor is a kaleidoscope of color.

After applying gel to the area and using a stencil to ink the image onto his arm, Andreana starts her magic. Getting a tattoo isn't for sissies. Some clients cry. Some don't bat an eye. This dude acts like he's having a fun day sunning himself on the beach.

"Tattooing is a lot harder than sketching on a piece of paper," Andreana says as she begins the indelible etching on his arm. "You're not working on a flat surface, and the skin is soft. You can't make a mistake because it will be with the person for life." 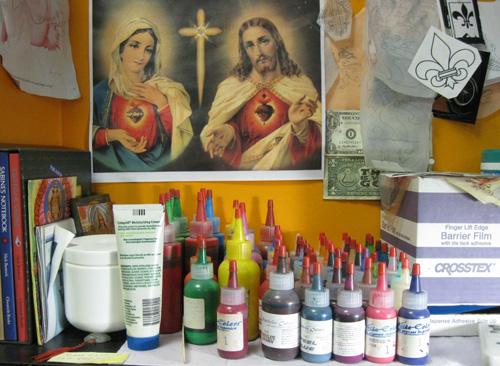 Photo by Nancy A. Ruhling
Andreana's palette -- a rainbow of bottles.

Every few minutes, she washes his arm down with a mix of surgical soap and water and pats it dry with a paper towel. The tattoo looks red now. But Andreana's using black ink. The red is blood.

Andreana grew up in a housing project in Milan that was filled with drug dealers. She dreamed of dancing, and from age 7 to 14, she focused on ballet. "I took the test to get into dance school, and I didn't pass," she says. "So I turned to punk rock instead." 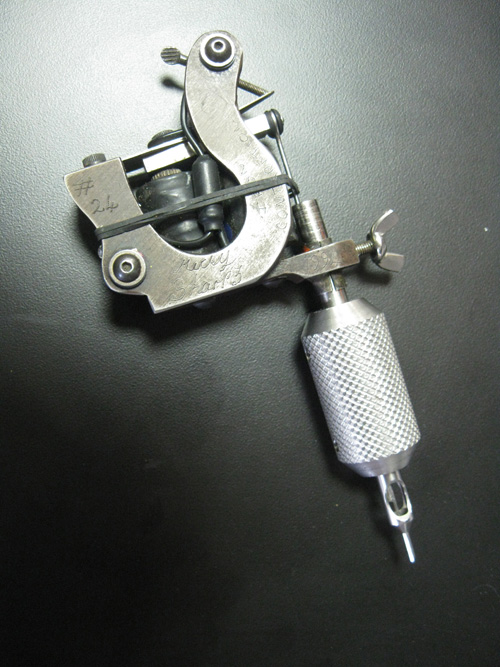 Photo by Nancy A. Ruhling
The tattoo machine, unarmed.

Much to her parents' dismay, she began hanging out with band members, ravers and party people, which is how she discovered the art of tattoos. "I always liked to draw," she says, "so I started doing tattoos by hand. This was in the '80s, when AIDS was an epidemic, and my boyfriend didn't want me to get into the business because of the danger of contaminated blood."

There weren't many female tattoo artists back then, and there still aren't. Andreana gets a lot of "You? No way" looks by some of the clients who come into Supernova Tattoo expecting a big, burly biker guy. 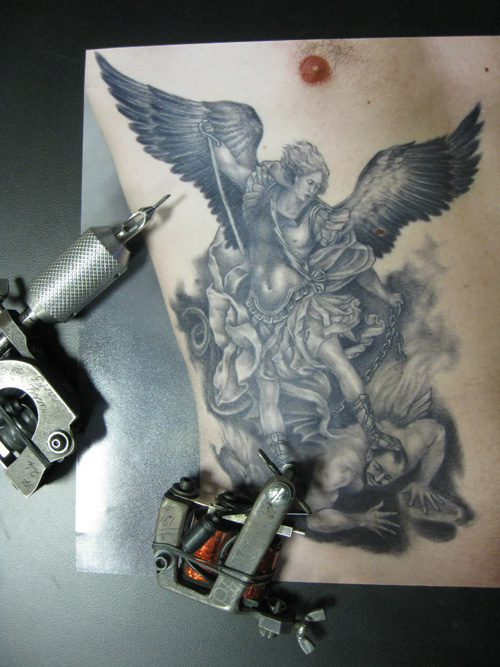 Photo by Nancy A. Ruhling
An illustration of Andreana's inking.

For a decade -- from age 18 to 28 -- she was an artist for a book publishing company. When she and her boyfriend split, she became the apprentice and girlfriend of a tattoo artist. Let's just say that she was young and restless and found the party scene wildly addictive.

"After I broke up with my boyfriend, I lost everything, including my three cats, when my apartment caught on fire," she says. "That was the moment I had to spray some Windex and clean up my whole life."

She started over, first in Austria then Spain and finally Puerto Rico, where she met a tattoo artist from Astoria at a convention. In 1998, she began working for him, doing 12-hour shifts. In 2001, when that shop closed, she went into business with her co-workers, and in 2004, she went solo and set up Supernova Tattoo. 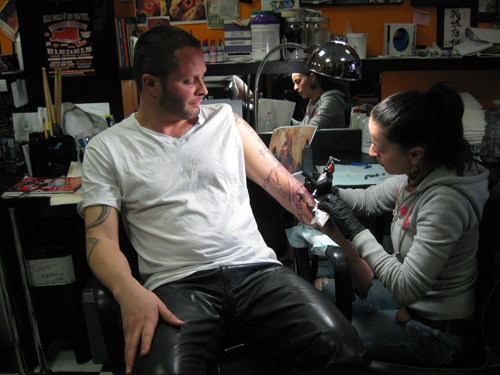 Photo by Nancy A. Ruhling
Andreana artfully inking a client.

This tattoo artist gig has been fun; Andreana charges $150 per hour. But the truth is, she's thought about doing other things. She's at Supernova six days a week, which doesn't give her time to do anything else.

"I'm a workaholic," she says, adding that she generally does two customers a day, each of whom books sessions for several hours at a time. "This is like my home."

Andreana has made good progress on the Ducati dude's arm. He has spent three hours in her chair, and his tattoo is half finished. She bandages his arm.

"It's like an open wound," she says, telling him to put unscented body lotion or moisturizer on it three to four times a day for two weeks. 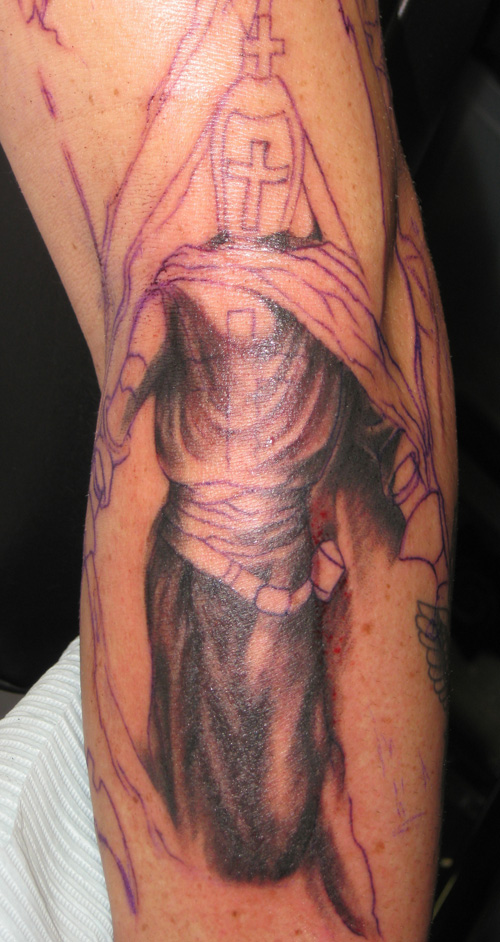 Photo by Nancy A. Ruhilng
The armed Crusader as a work in progress.

She's just about finished with the telling of her story, too. Or is she?

Actually, she's thought of a lot of things she'd like to do besides tattooing. Silversmithing or goldsmithing might be other ways for her to apply her artistry in a commercial manner.

"I've been doing this a long time," she says. "I'm almost ready to start something new. I feel like I haven't started my real calling yet."