In case you miss it, there's a banner that screams, for all intents and purposes, that this is the one and only Admiral Locksmith (keys made while you wait) that's been on Broadway at 37th Street for more than six decades. It's backed up by a two-story-high marquee that looks as though it belongs on that other Broadway.

If you still don't get it, there are signs that spell things out for you loud and clear: 24 HOUR EMERGENCY SERVICE; EXPERT LOCKSMITH; AUTO KEYS BY NUMBER. SALES * SERVICE * INSTALLATIONS * REPAIRS * SECURITY LOCKS * DOOR CHECKS * CYLINDERS MASTERED * ALL PHASES OF LOCKSMITHING. 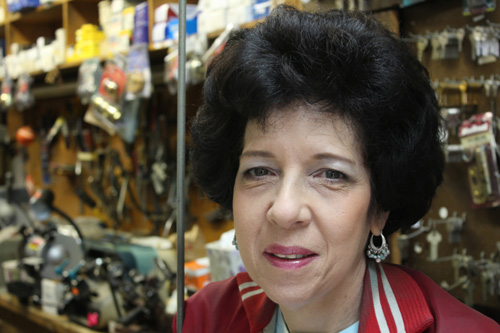 Photo by Nancy A. Ruhling
Roz has been at Admiral Locksmith since she was in the cradle.

Other words shout that from folding gates to police and panic locks, Admiral, Astoria's oldest locksmith, does it all for offices, factories and institutions. It's a visual cacophony, but Roz Kaplan, the owner, doesn't even notice the noise any more.

It's probably because she's been a presence in the shop ever since she was born. Her parents, Esther and Benny Ornstein, opened Admiral in 1952. 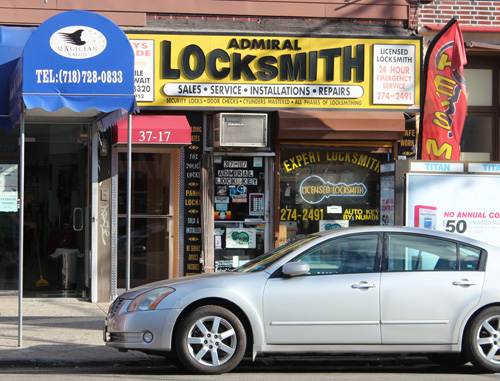 Photo by Nancy A. Ruhling
Admiral opened in 1952, two years before Roz was born.

"I don't know why they chose the name," she says. "They may have wanted an 'A' word to be in the front of the phone book listings."

When Roz came into this world two years later, her mother set up her and her baby carriage and crib behind the counter of the shoebox shop.

"I've always loved being here," she says. "People got to know us, and my sister and I made friends in the neighborhood and played around the corner. We went to P.S. 6 up the block." 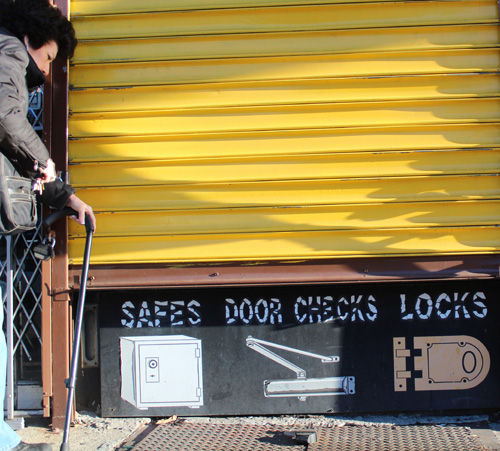 Photo by Nancy A. Ruhling
Roz doesn't let her cane slow her down.

Roz, a short woman with a high hairdo and bright blue eyes, started working weekends at Admiral when she was in high school. In addition to making keys, she kept the books.

After a year at Queensborough Community College, Roz got married and her husband, Bob, came into the business. While he was keying into the principles of locksmithing, she was working as a secretary for Colgate Palmolive. Eventually, they settled in Hollis Hills, Queens. 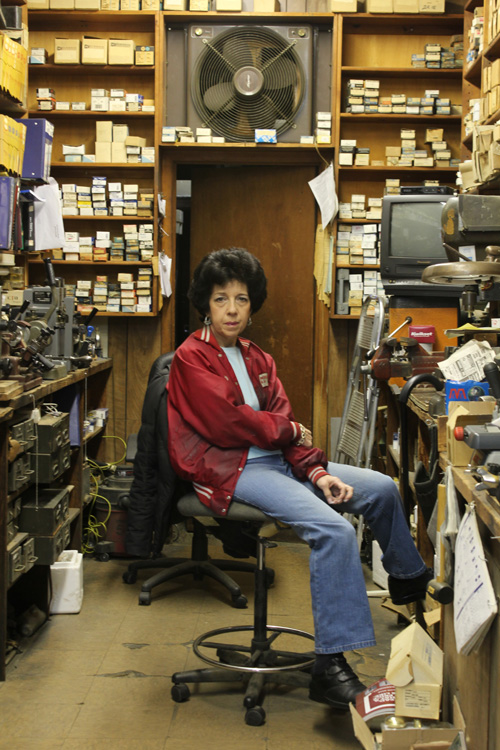 Photo by Nancy A. Ruhling
Roz mans the shop all by herself now.

There are many families that can't and won't work together, but Bob, Benny and Esther clicked like the tumblers in a safe's combination.

"We were all very close," Roz says.

When her parents decided to retire in 1985, Bob took over the shop. The couple had two young sons, so the time was right for Roz to join him.

"I just worked a few hours a day helping him out," she says. 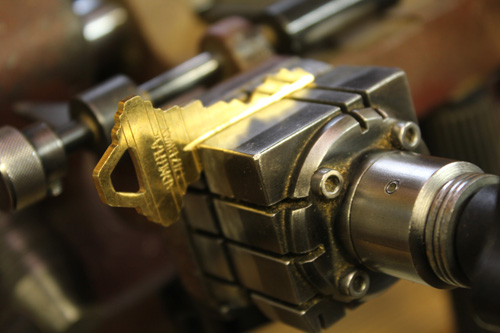 "I had to spend all my time going to the doctor and hospital," Roz says. 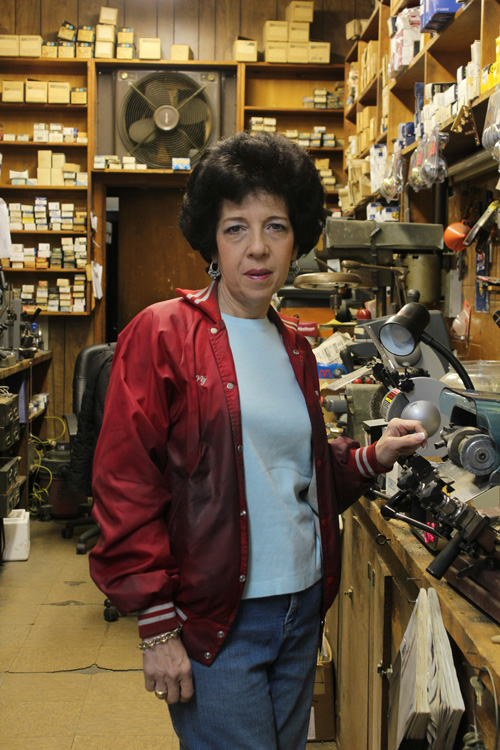 Photo by Nancy A. Ruhling
Customers and the TV keep Roz company.

When Esther died seven years ago, Benny and Roz kept Admiral going, and when he passed away three years ago, Roz became a solo act.

Roz likes the fact that Admiral hasn't changed much since she made her first key; that's was s-o-o long ago that she can't even remember whether it was hard to learn. She just knows that she still gets a thrill every time she cuts a new one. 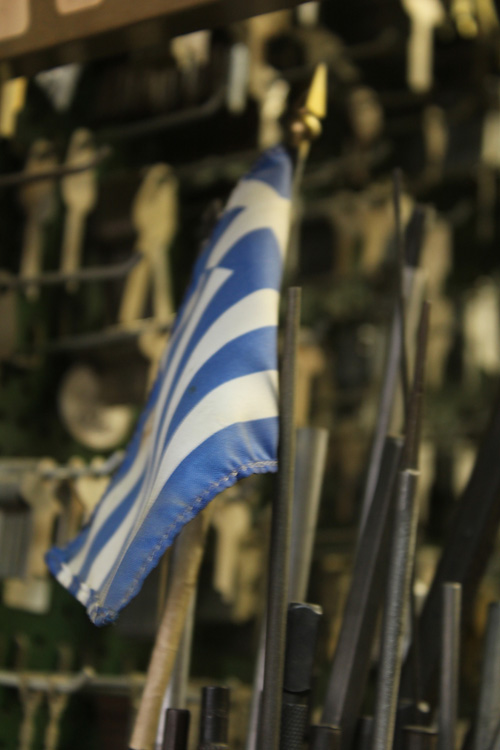 Photo by Nancy A. Ruhling
The Greek flag was given to her father by a customer.

The linoleum floor is cratered with cracks. Her father's wooden workbench is scarred with tool marks; Roz doesn't use it. She sits where she's always sat -- in the back with the portable black-and-white TV blaring to blast away her newfound loneliness.

"Even though it's my store now, I still think of it as my parents' store," she says. "Even today I can still feel their presence, and people still ask me where the old man is."

When they do, she points to the color photo on the front counter. 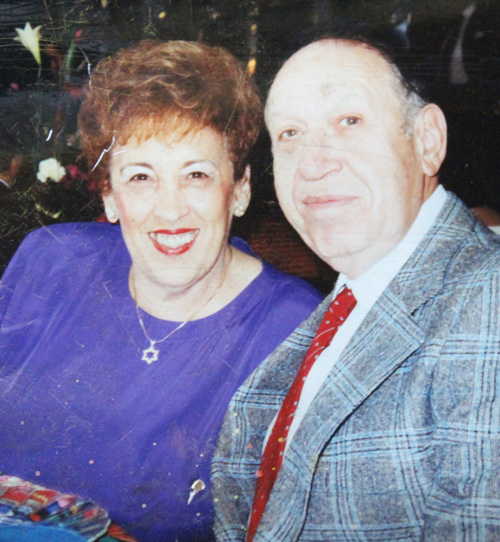 Photo by Nancy A. Ruhling
People still ask about her parents, Esther and Bennie Ornstein.

Roz has hired guys to do the outside jobs -- people who lock themselves out always call in a panic at all times of the day and night -- and she does the in-shop work.

Some two decades ago, she got multiple sclerosis; that's why she wears heavy black orthopedic shoes and walks with a cane. So efficient and hard-working is she that most people, even the neighboring shopkeepers she counts as friends, don't know the full debilitating effects of her illness. 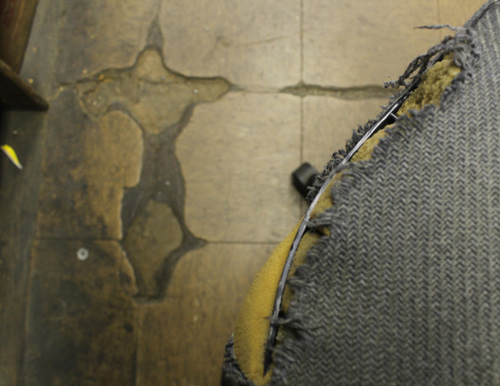 Photo by Nancy A. Ruhling
The old linoleum floor shows its age.

"Sometimes, it's hard to get up and come here," she says. "But I want to keep the store going."

Roz sees running the store as a way to honor her parents. Besides which, she really likes doing it.

"People are very friendly," she says. "Customers bring me coffee, and it's always nice when they remember my parents and how the shop used to be." 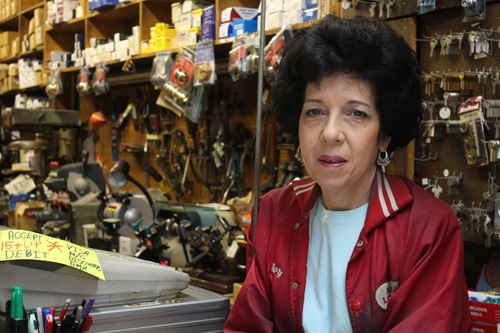 Photo by Nancy A. Ruhling
Roz isn't ready to give up the shop yet.

Roz doesn't get much chance to take time off, and that's OK by her. She's at Admiral six days a week. She does remember closing for four days to go to a wedding in Oregon, but that was a long time ago.

"I know I can't do this forever," she says. "I take it one day at a time, and I push myself. Sometimes I'm surprised I have the strength to do this."

She'd be pleased if Admiral remains a locksmith after she's cut her final key, but she's not holding out much hope. Her sons have other interests and have no intention of taking over the business. 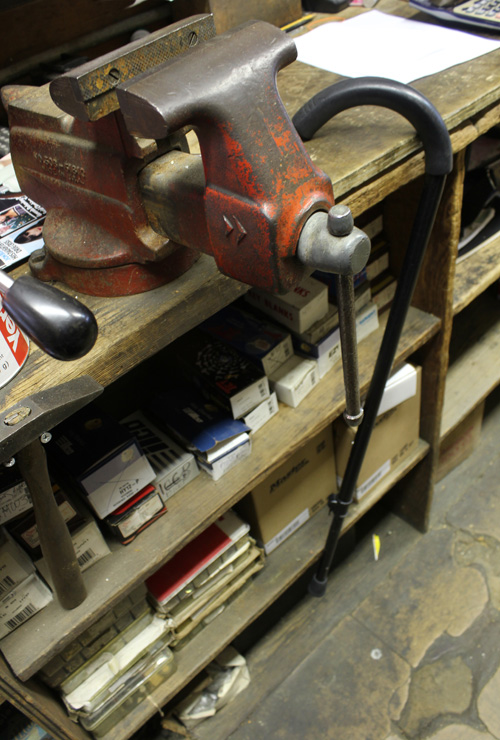 Photo by Nancy A. Ruhling
She'll keep coming in until she can't.

At 9 on the button, when the shop officially opens, Roz puts on her uniform. The cherry-red satin bowling jacket with the Admiral name on it matches her glossy lipstick.

The first call of the day comes in.

"You're locked out of your house? I'll send someone right over."