There has been much to celebrate in Elizabet Flores' life, but she has marked only four occasions with formal parties.

The largest, an event for 300, was for her wedding a decade ago. 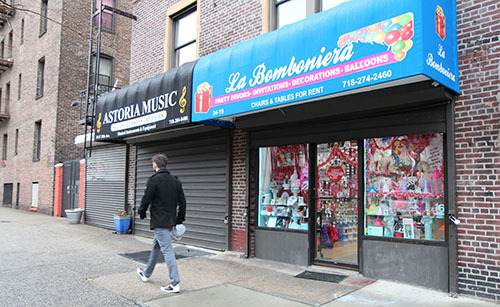 There were smaller affairs when her daughter, 8-year-old Marylu, and then her son, 6-year-old Richard, were christened.

And the latest, a blow-out bash on the sidewalk with a mariachi band, bouquets of balloons and a tent, was held in November 2015 to mark the new location of La Bomboniera Marylu, the party-planning business she has owned for 11 years.

Sure, Elizabet, who has hair and fingernails of gold, would like to go to more parties, but she's so busy setting up ones for other people that she doesn't have any time for her own fun.

Elizabet, who is from Mexico City's Nezahualcóyotl, started working hard long before she came to Astoria. 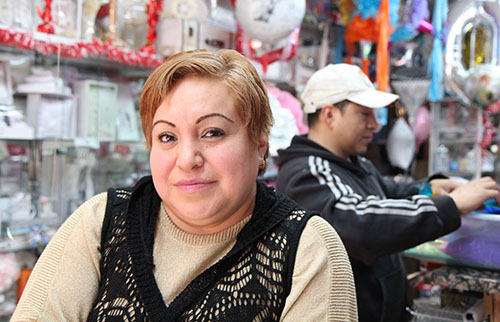 Photo by Nancy A. Ruhling
Elizabet has owned the party-planning shop for 11 years.

The oldest of five, Elizabet had big plans, the kind that warrant parties, for her future.

She was on her way to earning a college degree, a dream that derailed when her father died after her 21st birthday.

Her mother, who had never held a job and who was very ill, folded up into herself like a linen napkin, leaving it up to Elizabet to manage her financial and daily affairs.

"I had a wonderful life until this happened," she says. "I had a boyfriend and a great job working for a large company that sold exhibition booths for conventions and big events. I had no intention of leaving Mexico City."

Soon, Elizabet had to quit her job to take care of her mother. 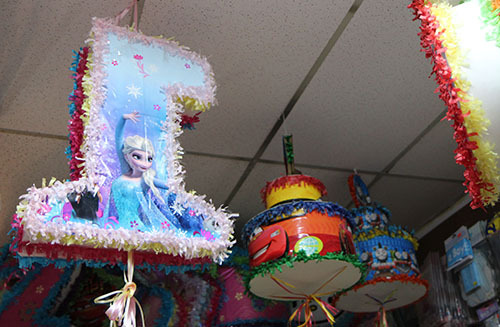 Photo by Nancy A. Ruhling
A pinata for every party.

In 2001, when her mother was stable, she told her she was going to take a month-long vacation in Los Angeles, where she had a friend. But she had no intention of returning.

"My mother would have been suspicious if I had told her I was coming to New York because her sisters live here," she says.

Although Elizabet procured papers, she was turned back at Tijuana. 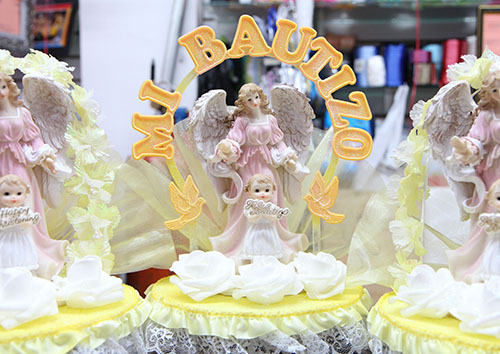 Photo by Nancy A. Ruhling
A cake topper for a christening.

"I spent four hours in jail," she says. "They told me there was something wrong with the stamp on my passport."

So she did what a lot of immigrants do: She came illegally.

"It was only five minutes, but I was nervous," she says. "It was a black car, I think it was a Rolls-Royce, and it was driven by two young American women who told me they did this all the time. When we were safe, they switched the music on the radio from American to Mexican so I would know." 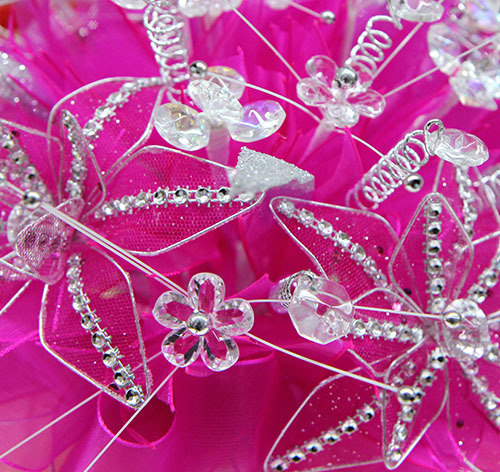 Photo by Nancy A. Ruhling
A bouquet for a fairy-tale princess.

After a short stay in a hotel, she got into a second black car.

When her month's vacation was over, Elizabet came to Astoria to live with her aunts.

She knew enough English to look for work and found immediate employment in a laundry, folding and washing clothes.

She filled her idle hours with a second job as a salesperson in a children's clothing store on Steinway Street. On top of that, she became a student in English-as-a-second-language classes. 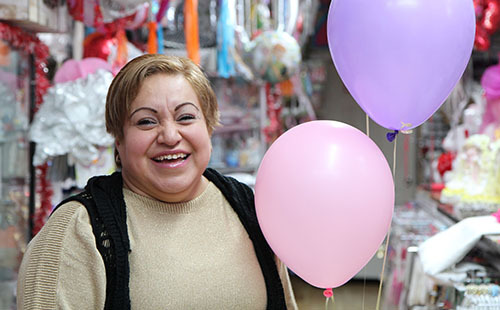 Photo by Nancy A. Ruhling
Elizabet left her home in Mexico in 2001.

"I applied to travel agencies because I had studied tourism in college in Mexico, but I couldn't get any jobs because I didn't have papers," she says.

It was an encounter at the laundry that determined and changed her future.

One of the customers, a woman from Peru, owned a party-planning business and asked Elizabet to spread the word.

They lost touch then met again after Elizabet had traded her laundry job for one in an Italian bakery. Bound by Spanish, their common language, they clicked. 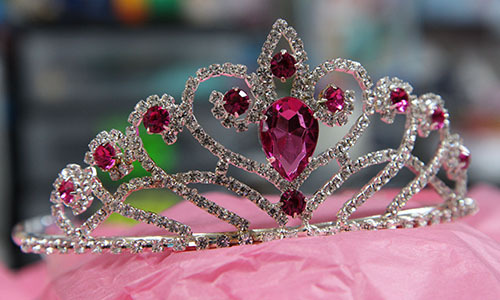 Photo by Nancy A. Ruhling
A glittering Sweet 16 tiara.

Soon, the woman hired Elizabet to clean her house and wash her clothes.

"I did this work between my two other jobs," she says. "I stopped only long enough for a coffee break."

When Elizabet found out she was selling the six-year-old business, which was on 30th Avenue at 35th Street, she decided, on the spur of the moment, to buy it.

"Everyone in my family said I shouldn't do it," she says. "I had never even been in the store. I didn't even know how to blow up a balloon." 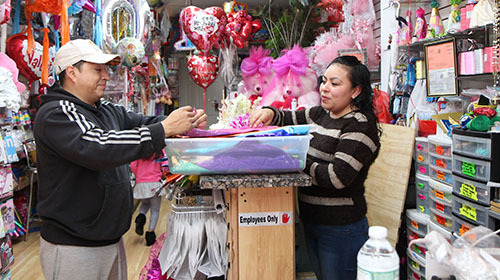 Photo by Nancy A. Ruhling
Ana at the front counter.

Lucio Ramos, the boyfriend who became her husband, loaned her $3,000 toward the $10,500 purchase price, which Elizabet had six months to pay.

"I was so ashamed to ask for the money," she says, adding that with rent and other expenses, she had to raise a total of $22,000. "I can't tell you the number of nights I didn't sleep thinking of it."

At this point, Elizabet, an independent woman who has kept her maiden name, had no intention of marrying Lucio or anyone else.

The two had met as teenagers in Mexico and reconnected in Astoria. Lucio, a waiter at a Manhattan restaurant, also had crossed the border under the radar. 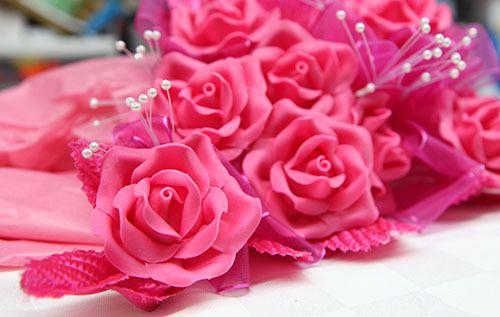 Photo by Nancy A. Ruhling
Roses that will never wilt.

Elizabet learned the business of La Bomboniera Marylu, which sells invitations, favors, decorations and cakes for every celebration in life from baptism and Sweet 16s to weddings, as she went along.

Elizabet, who is 39, and her sister Ana call themselves "the balloon girls." They work the shop six days a week and go to the party sites for setup. On weekends, they bring their children, who like to hand out the colorful helium balloons.

The shop, where Thomas the Train pinatas and plastic Hawaiian leis share space with rhinestone tiaras and bouquets of rubbery red roses that look like cake icing, is a glittering dime-store Disneyland. 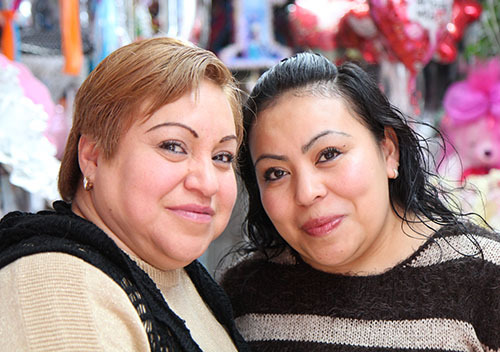 Photo by Nancy A. Ruhling
Elizabet and Ana are waiting to get papers.

With the money she has earned from La Bomboniera Marylu, Elizabet has brought her two sisters to Astoria.

But there's one thing she hasn't been able to do: Get papers for them, herself and Lucio.

"I've been working with my lawyer for a long time to get us visas," she says, excitedly.

When that happens, she's going to throw a party to end all parties.