Shrill as a scream, the cry pierces the air. There's a squirrel climbing the tree, but no squirrel ever emitted such a sound. Behind the high emerald-green gate, two bear-cub-like dogs are howling their heads off.

This isn't the country, this is 41st Street, where the raw-edge warehouses live. The cry comes again; it's a good-morning crow from a red-headed rooster!

Michael Halberian, a genial fellow with over-the-ears silver hair and a lad's spring in his step, pops his head out of the house to see what all the commotion's about. "Come on in, Gina and Blackie won't hurt you." 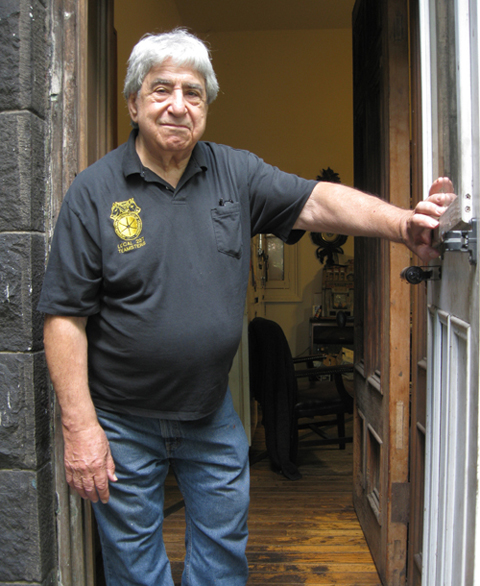 Photo by Nancy A. Ruhling
Michael leads the way into the magnificent mansion.

House isn't the right word. This is the fabled Steinway Mansion that was built in 1856 high on a hill facing the East River for a millionaire named Pike, and it's where Michael has spent most of his life.

There are two gates; they tell the tale of the mansion. The fancy wrought-iron one that hasn't been used in decades looks as though it came from the Sun King's Versailles. The green-painted chain-link one, where the dogs and rooster are singing their serenade, is never locked and is where visitors enter.

Across the courtyard, there's a line of laundry hanging out, right by the colonnade of arches that lead to the front yard, which looks like a desert meadow. 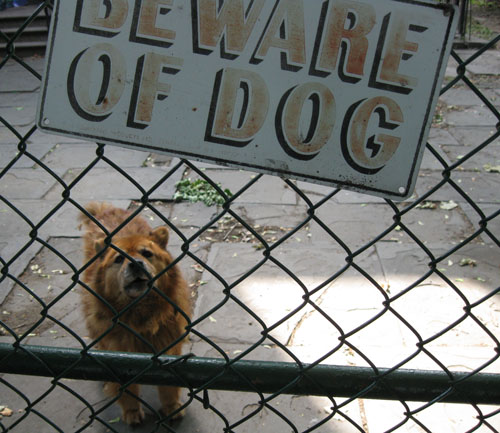 The 27-room granite and cast iron Italianate mansion, a city, state and federal landmark complete with ivy-covered tower, has seen better days. The entrance is framed by what's left of a pair of magnificent columns that used to support a porte-cochere. So much paint has peeled from the double front doors that there's none left. There's a hole in the roof of the side porch, and there are a half-dozen vintage cars in various stages of decay parked on the side lot. (More photos.)

In the center of a grove of maples, H.A. MacNeil's larger-than-life bronze Indian stares at the rich ruins, chalk-like streaks of white running down his cheeks like tears. 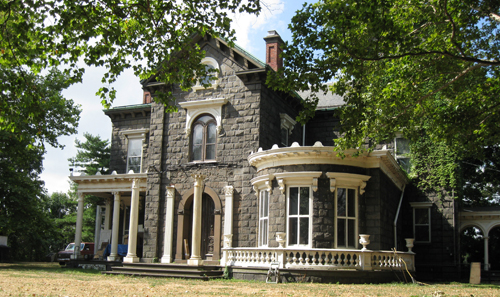 Photo by Nancy A. Ruhling
The 27-room mansion is an Astoria icon.

Michael heads back to the kitchen, which looks as though it hasn't been updated in a century. Michael's a collector. In addition to the bright white circa 1925 commercial refrigeration unit, there are three slot machines, a vintage airplane propeller and a 1935 photo of Babe Ruth.

The rooster, who goes by the name of Kaka, crows again. He's a bantam and like Michaels' chickens, he wandered onto the property from the chicken market at 20th Avenue and 31st Street by ConEd.

"He's the greatest little guy," Michael says. "He comes when I beep a horn. I've been trying to find him some girlfriends." 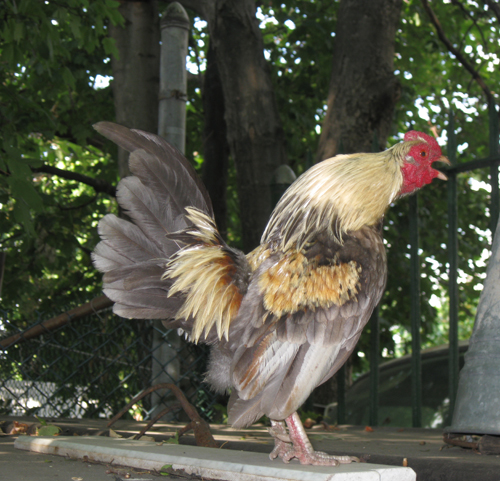 Photo by Nancy A. Ruhling
Kaka, the mansion's resident rooster, struts his stuff.

Michael's spent a lot of time and money on this mansion, and now it's time to let it go. He and his sister inherited it from their mother after her death in 1994. He has lived here since and pumped $5 million into it. "I never realized how much I spent!" he says.

He recently bought his sister out -- with money he didn't have. The estate is on the market for $4.5 million -- $2.5 million for the mansion, plus $2 million for the adjacent lot, take one or all, buyer's choice.

The mansion, which has five marble fireplaces and parlor doors whose glass is etched with pictures of antique scientific instruments, holds a lot of memories for Michael, who's going to turn 83 in November.

This will take a while; so kick off your shoes and get comfortable. "Let me give you the story," Michael begins. 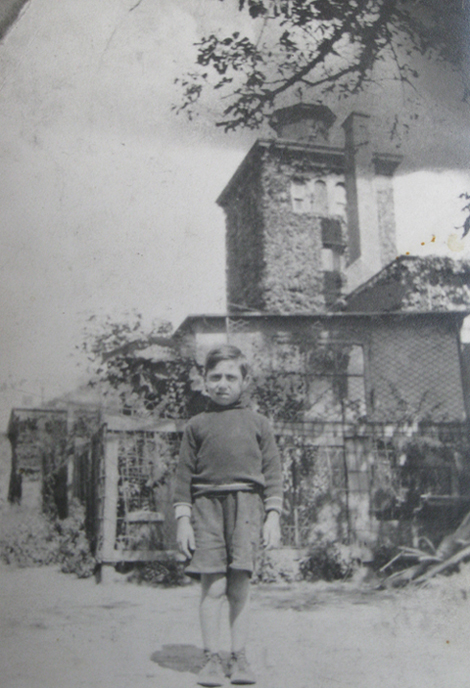 Photo by Nancy A. Ruhling
Michael, in a vintage photo, outside the mansion.

Jack, his father, an Armenian immigrant from Turkey, came to America in 1914. The mansion, which then was owned by the piano-making Steinway family, was one of the first things the teen saw. It attracted his attention because he had been a stone mason in his home country. He told his friends that one day he would be the master of the mansion.

A dozen years later and two years after marrying, Sharmie, another Armenian immigrant from Turkey, he did just that. In 1927, Michael was born while they were living there. During the Great Depression, they nearly lost the house.

"My father had an $18,000 'on-demand' mortgage, which meant the lender could demand the full amount at any time," Michael says. "When the stock market crashed, he did. My mother's aunt got all her relatives together, and they raised the $18,000. We converted the house to three apartments, and we essentially became like caretakers and janitors. My mother kept the place spotless from attic to basement. Sundays were a day of work, not rest; we did things like painting and repairs. My mother and sister slept in the library; my father and I slept in one of the parlors." 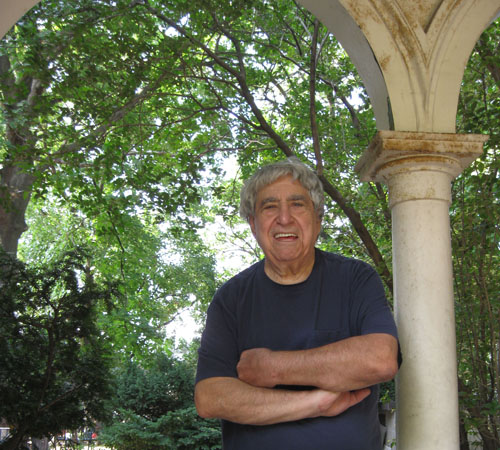 Photo by Nancy A. Ruhling
To Michael, the mansion is heaven on earth.

When he was 10, Michael was pressed into service at his father's tailor shop. Every Saturday, he walked to Ditmars Boulevard and took the El to Manhattan. He brought his father's home-cooked lunch in a jar.

His job was to take the men's jackets and vests to the fabric house to get swatches so matching pants could be made. His father did the hems and alterations. The mansion had a coal furnace, and Michael was paid 20 cents to haul out the ashes, which filled 20 to 25 baskets per week. Those few Saturdays he didn't work, he spent 10 cents on the movies. He had a choice of treats -- Spanish peanuts were 5 cents; so were Kraft caramels and cigarettes.

"I had wonderful parents," he says. "I lived a great kid's life." 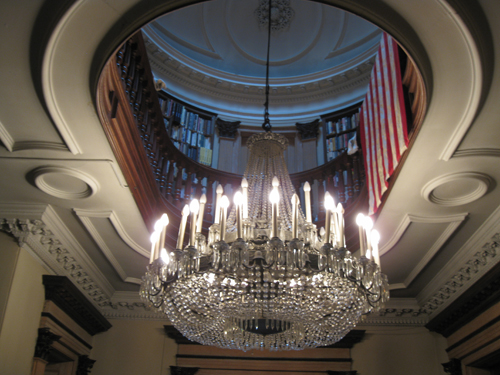 Photo by Nancy A. Ruhling
The chandelier is the focal point of the central hall.

After serving a little more than a year in the Army Air Corps during World War II, Michael enrolled at New York University. He was studying accounting and hoping for a career as a businessman when he fell in love.

"In those days, you couldn't get engaged unless you gave the girl a diamond ring," he says. "So I quit school after three years to work as a presser in my father's tailor shop so I could save for it. It was 1 1/2-carats and cost $1,500."

He got married the same month the Korean War started and moved his bride into one of the apartments at the Steinway Mansion. 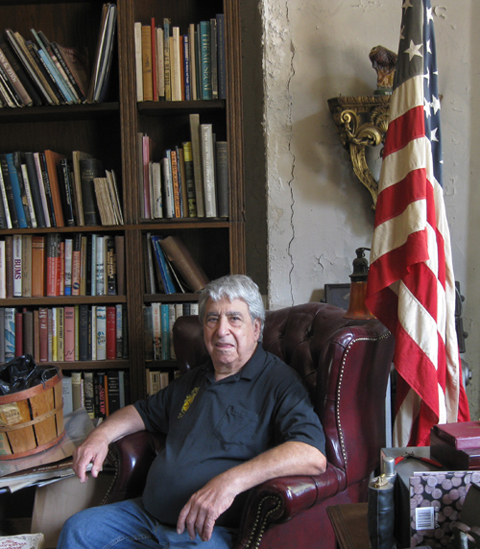 Photo by Nancy A. Ruhling
One of Michael's favorite rooms is the library.

"I don't know what I was thinking," he says. "My wife and my mother had a big fight, so we moved out."

Eventually, Jack's Pants Shop grew and by 1961, it became Jacques-Michael, which sold men's clothing. In 1970, Michael opened a restaurant. Knickers was a couple of doors away from Jacques-Michael on Second Avenue, so it was easy for Michael to work the bar when he got off from his day job. "I took in a ton of money," he says. "I only slept four hours a day."

In 1976, Michael's father died, and his mother inherited the house. She moved to an apartment in Bayside, and Michael, who was getting a divorce, moved back into the mansion the following year. When she died in 1994, the house passed to Michael and his sister, and Michael, when he retired at 58, began restoring it to its former glory.

If Michael is sorry that the Steinway Mansion won't be passed down to the next generation that includes his two children and five grandchildren, he never says so. 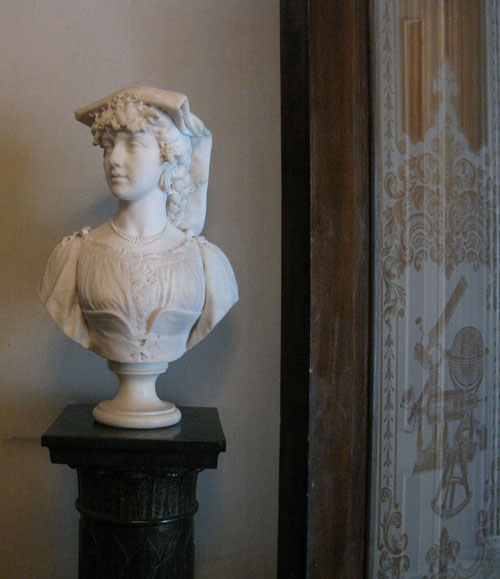 Photo by Nancy A. Ruhling
A marble bust and an etched-glass door bring beauty and science together.

He wanders through the central hall and flips the switch that turns on the 1,000-pound crystal chandelier, big and round as the sun. It's motorized; he pushes a button and it rises majestically toward the skylight. He remembers getting married in this room, which, like the rest of the house, is filled with what he calls his "artifacts."

There's a full suit of armor, an antique brass telescope that J.P. Morgan had on his yacht and a pair of stuffed gorillas, the kind of prize won at carnivals, sitting on the metal and glass table.

In the dining room, in addition to the circa 1890 dining set, there's a backgammon table decorated with micro-mosaics, a brass samovar, a bronze bust of Beethoven and a 19th-century Japanesque fireplace screen.

The library, Michael's favorite room, houses his collection of 20,000 books about New York City, classical statues, a wine-red wingback chair and even an old parking meter painted pumpkin orange. The chess board is always set up in case anyone wants to play.

Did Michael mention that he began collecting books when he was a boy? Let him tell you the story.

"My father had rented one room to a retired kindergarten teacher," he says. "She called me Master Michael, and every night I sat at her feet while she read a chapter from books like Treasure Island. These magical books became very important in my life. I was reading and understanding at college level when I was in sixth grade."

The basement, oh, you must see the basement. Michael spent $1 million to turn it into a private club that features a pool table, a billiards table, a sauna, a whirlpool guarded by two marble lions, a wet bar, a home theater and antique pub booths imported from England. 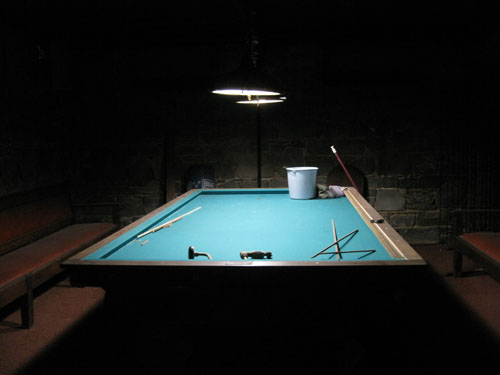 Photo by Nancy A. Ruhling
A pool table turns the basement into a private club.

"I had lots of parties here," he says. "Hundreds of people came. I stopped them four or five years ago."

Michael isn't so great at walking up stairs these days, but feel free to show yourself around. In the master bedroom, there's a mammoth Renaissance Revival bedroom set. There's also a room filled with scientific instruments, some once owned by Pike, and there's a spiral staircase that leads to the tower.

"This is the greatest house on the Eastern seacoast -- it rivals Newport because it's a livable house," he says as he heads back to the kitchen. "I'm an island in a sea of warehouses in a great mansion." 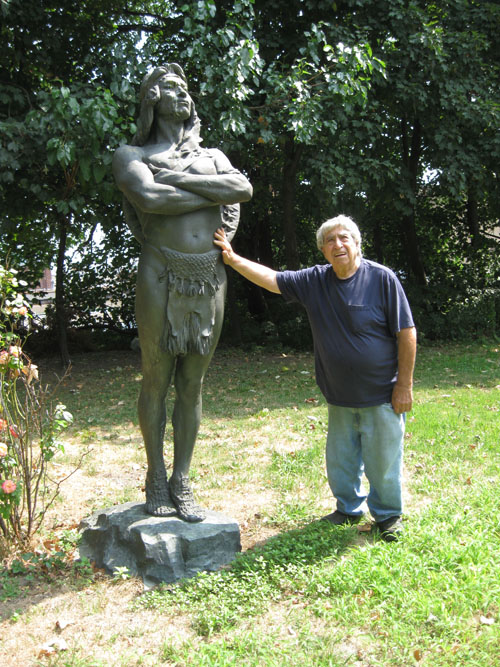 Photo by Nancy A. Ruhling
Michael and H.A. MacNeil's bronze Indian look over the property.

He stops in front of the glittering chandelier and looks skyward. Pike, the first owner of the mansion, was a Mason, and he put the Eye of God into the center of the skylight.

The Great New England Hurricane of '38 poked out God's eye, so he's not watching over Michael any more.

"The time has come for me to make my exit," Michael says.