It's a funny thing, but Cliff Straus doesn't remember exactly when he started working for Straus Paint & Hardware Co. He just knows that he's never wanted to quit.

Cliff, a benevolent bulldog with a buzz cut, walks through the door to the back office and pauses. There, scrawled in fading lead pencil on the wooden jamb, it says "40" Cliff age 4, 64." 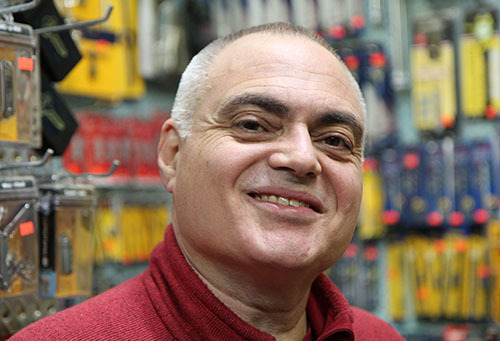 Photo by Nancy A. Ruhling
Cliff's the man behind Straus Paint & Hardware Co.

Below it, there are a half dozen notches sans notations, presumably measuring his height until he hit the 40 inches.

Cliff's convinced they prove he made his first visit long before he was 4. It's easier to say he's spent his whole life selling hammers and nails.

The Steinway Street store, which was started by his great-grandfather, opened 86 years ago when the building wasn't even a decade old.

There aren't a handful of mom-and-pop hardware stores left in Astoria, and Straus is one of the old soldiers still standing. 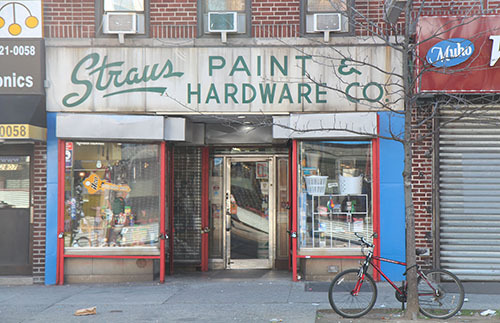 Straus, which has tin ceilings, wooden floors and narrow bowling-alley aisles, looks pretty much the same as it did in 1930 except it's bigger.

Cliff doesn't know all the details because it happened in B.C.

That stands for Before Cliff, a time period Cliff references a lot.

Anyway, according to the story he was told, after his family bought the building in the 1940s, a horse and plow excavated the backyard to create the extension. 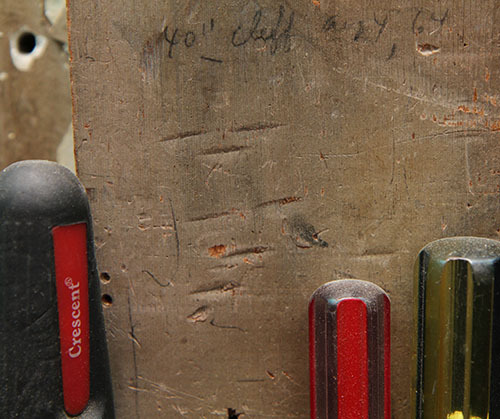 Straus Paint & Hardware Co., whose white and green sign was installed circa 1940, started out as a paint store, but Cliff's great-grandfather had allergic reactions to the chemicals, so he immediately handed the keys over to Cliff's grandparents.

It was they who eventually converted it into a hardware store that still, on occasion, does sell paint.

When Cliff's grandfather died in 1958 B.C., his grandmother, Evelyn, took over and Cliff's father quit college to help her out.

Cliff proudly points out the golden hammer over the door to the back room that commends Evelyn for her 50 years of service to the hardware industry. 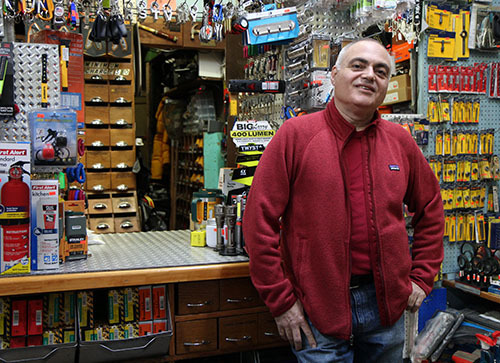 Photo by Nancy A. Ruhling
He's worked at the store his entire life.

She lived above the store, which became Cliff's second home. By age 6, he was stamping keys.

Although Cliff and his two brothers worked at the store, Cliff's the only one who stayed.

"I never graduated from college," he says. "The more I worked here, the less I went to school. I never expected to stay here." 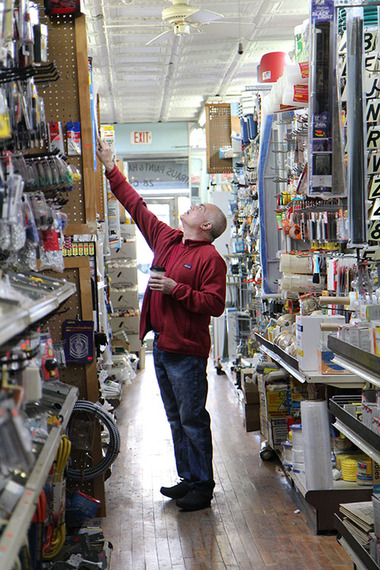 Photo by Nancy A. Ruhling
Straus has nearly 10,000 items in stock.

He shrugs. It's not that he had any other particular career plans.

When his father, who is pushing 80, retired two years ago, Cliff took over.

Straus, whose inventory soars to the sky-high ceilings, stocks nearly 10,000 items ranging from hatchets (there's not much call for them, Cliff confides) to kitchen garbage cans and Betty Boop key chains. 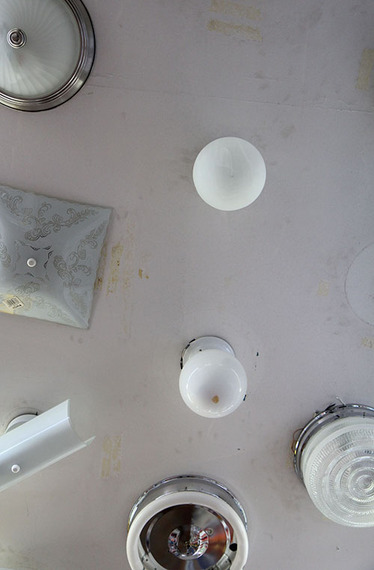 Photo by Nancy A. Ruhling
Need a ceiling light? Look up.

Straus is the place you go to get a key made, a piece of wood cut or a hole drilled in a section of metal. It's where you hang out to shoot the breeze about the Mets with Cliff and his revolving staff of solid young men.

"I keep getting older, but they always stay the same age," he says.

Everywhere he turns, there are reminders of the past. When customers come in to have keys made, he remembers the old key machine in the basement. 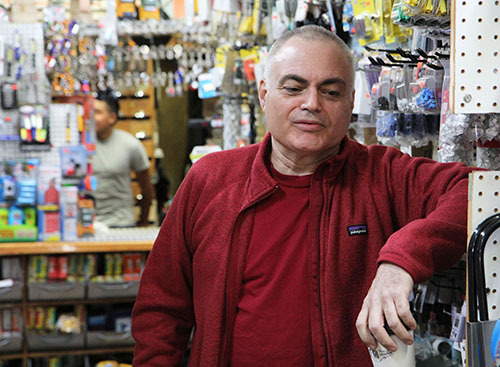 Photo by Nancy A. Ruhling
Cliff learned on the job.

Some of the key blanks are still stamped with E. Straus from the time of his grandmother.

The real history of Straus Paint & Hardware Co. lives in the basement, which looks like a bat cave.

As Cliff walks down the steep, sagging wooden steps, which he's done probably a million times, the old coal furnace comes to mind. It was replaced long before there was a B.C., but there's still coal dust in the cellar. 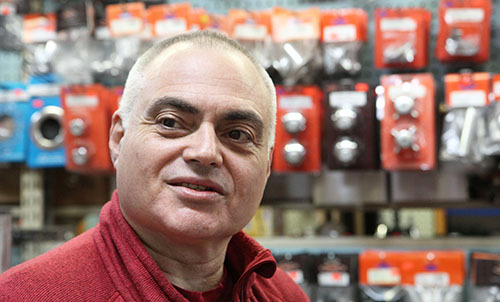 Photo by Nancy A. Ruhling
Straus is open seven days a week, and Cliff is there most of them.

The wooden shelves are filled, mostly with items that didn't sell. At one time, Straus carried household goods. That's why a half dozen folding shopping carts are cooling their shiny silver wheels here alongside the bicycle Cliff rides to work. 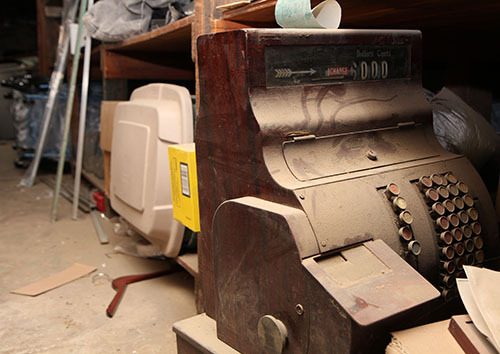 It's hard to throw anything way, and Cliff guesses he probably should, but it would be like tossing his own history in the trash.

He sees the old cash register, which weighs a ton, and knows he could not give it up even if he could lift it long enough to carry it to the curb. It's stuck, forever, at its final sale, $60.00. 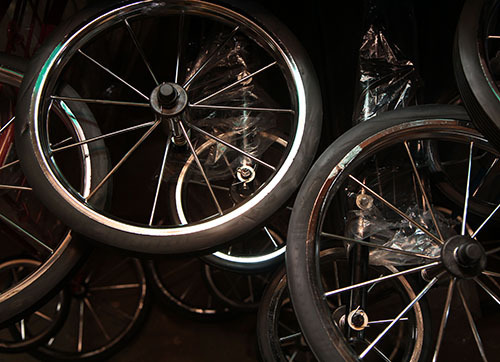 He rummages around and emerges with a cardboard box of old cans that no customer will ever ask for again.

He lines them up on a shelf: Old English Paste Wax (it's empty), Adhesium (it's used to size walls before applying wallpaper) and Ox-O-Spar (it's billed as quick-drying enamel). 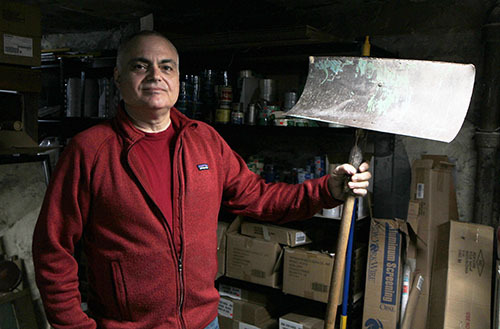 Photo by Nancy A. Ruhling
He still puts the 70-year-old snow shovel to work.

Did he mention the 70-year-old snow shovel? Just like his father and grandfather, he's used it every winter of his working life.

It takes him a while to find it, but when he does, its time-worn metal blade gleams in the light of the bare bulb like a diamond. 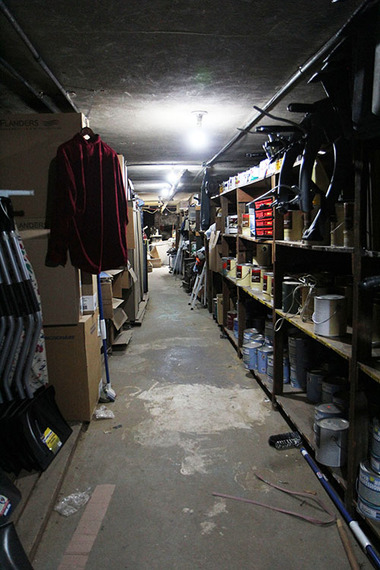 Photo by Nancy A. Ruhling
The stuff of the store's history.

Sometimes, Cliff thinks he should have left Straus. He did, after all, have offers through the years.

It doesn't matter now: At 55, he's not going anywhere.

He knows he may very well be the end of the line. He has no children, so he takes comfort in the fact that he and Straus Paint & Hardware Co. will retire together. 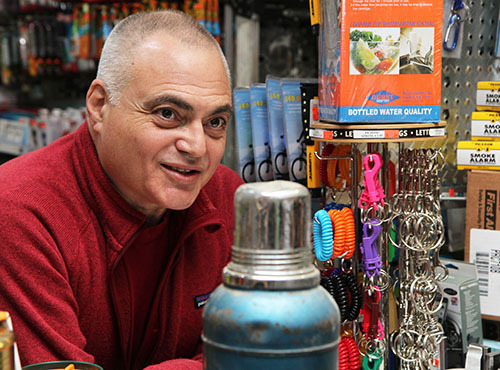 Photo by Nancy A. Ruhling
Cliff will be the last one to turn out the lights.

Before he turns out the basement lights, he picks up a dust-shrouded Yankee screwdriver. Stanley stopped making them decades ago, probably B.C.

A couple of days ago, a customer asked for one. Cliff didn't think he had any left, but he'll take this one upstairs.

You never know, the guy may come back.