The freight elevator in the century-old factory building is in use. But the stairs are free, so Bernard Klevickas, clutching a paper coffee cup, begins the trek to the fifth floor at the top.

As he climbs the tired cement steps, the acid scent of industrial chemicals follows him.
"It's messy," he says as he opens the door. "I tried to clean it up, but..."

Messy is a pretty lame description for the way his 900-square-foot art studio looks, but that's OK. Bernard is an artist, not a writer. He gives form to sheet metal not sentences. 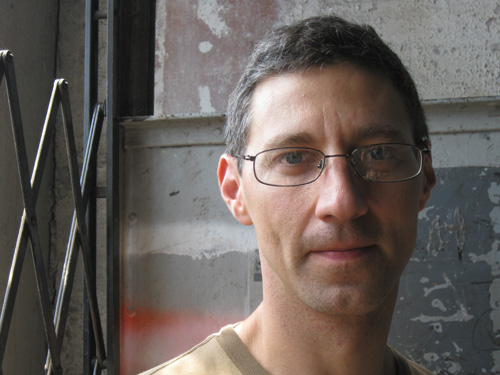 Amid the machines, there are a hand-me-down sofa and coffee table that look as though they were picked out of the trash; a work bench covered with a mountain of old, rusty bicycles and piles of tools; a motorcycle in the closet leaning against Bernard's work clothes; and a variety of found objects and odds and ends.

A faded red rose. An empty beer glass. A box of greasy gears. A 19th-century French table with brass handles. A toothbrush that's still in its package.

It's a relief to know that Bernard doesn't live here; he has a place within walking distance. But he spends most of his time here, designing and putting together his metal sculptures. 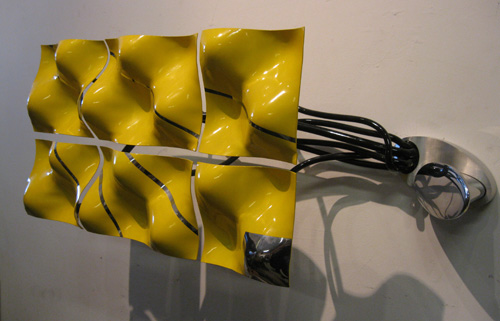 When he finishes his daytime shift as a machinist at a film restoration company, he gets to the studio, generally around 7 or 7:30 at night, and works until 2 a.m. This schedule gives him just enough time to catch a few hours of sleep before heading back to the office.

Like a gangly teenager, Bernard is all elbows and awkward angles; his cropped hair, dimples and glasses add to his adolescence. He grew up in Indiana. He didn't know what he wanted to do, but he knew he liked to figure out how things worked. 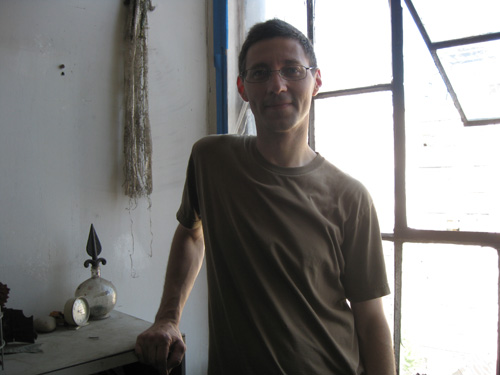 Photo by Nancy A. Ruhling
Bernard in the shadows of his studio.

"When I was in kindergarten, I started taking alarm clocks apart," he says. "But I couldn't put them back together."

Eventually, he decided that being an artist would give him the freedom he needed to create the things that were bubbling in his brain.

"I wasn't a very social person when I was growing up," he says. "Art felt like a way to communicate with people. Where words fell short, an object can be used to sum up an experience better than them." 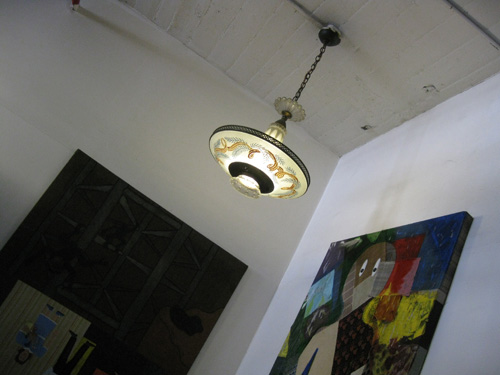 Photo by Nancy A. Ruhling
Bernard's paintings, illuminated by the chandelier from his boyhood home.

With high school behind him, he took off two years to explore his artistic options and decided that college would further his art. He graduated, with honors, from the Art Institute of Chicago. "It took me eight years," he says. "Even though I was going part time, I was still racking up a lot of debt."

After working in the Art Institute of Chicago's museum, he came to New York City. A job as an art fabricator at Polich Art Works in Rock Tavern, New York gave him the chance to work on the works of other artists, including Jeff Koons and Frank Stella.

"Then I got restless with where I was in life," he says. "I wanted to create my own large-scale sculptures." 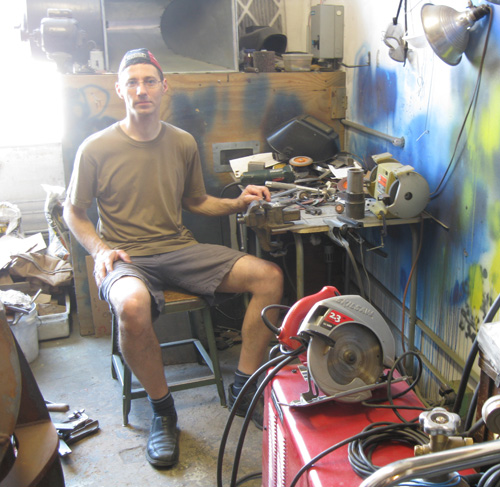 Photo by Nancy A. Ruhling
Bernard in his century-old studio.

So he took a leave from Polich and created his first large sculpture, "Untitled (2nd Tier)." "It cost me $3,000," he says. "I wanted to put it in a show, but I didn't finish it until three weeks after the show opened. I called it '2nd Tier' because I know I'm not a blue-chip artist, I'm only second tier."

Bernard misjudged himself; "Untitled (2nd Tier)" went on to win third place in a subsequent show; the award was $2,500.

Since then, Bernard's work has been exhibited at a number of places, including Governors Island and Two Coves Community Garden. This month, his Bridge Across Generations will be on display at Astoria Park starting Friday. 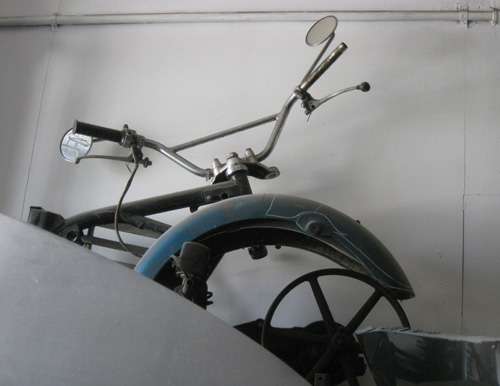 Bernard's main medium is sheet metal. "I like taking a flat piece of material and shaping it. I like the fluid shapes and forms," he says, running his hand over the black, wave-like forms of "Untitled (2nd Tier)." "You can see outside the form and inside it."

After creating a 3-D computer model, Bernard painstakingly cuts, welds, grinds, paints and polishes his pieces at the studio. "There's a lot of room for experimentation in my process," he says. "And that's the way I like it." 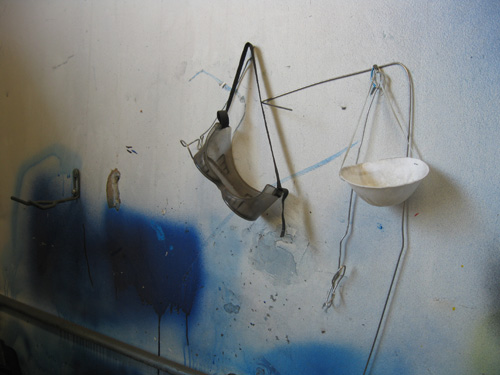 Photo by Nancy A. Ruhling
A face mask and goggles become an unplanned still life.

Recently, he's also been making sculptures out of recycled plastics. "I'm inspired by everyday items and how they are made, which most people are not aware of," he says. "It could be something as simple as a plastic portable electric fan. These items are like 21st-century cave paintings -- they are marks that our civilization makes for the next generation."

To ratchet up recycling, Bernard created "Twisted Bicycle," a sculpture/planter made of an old bike that is designed to be wrapped around city streetlights. 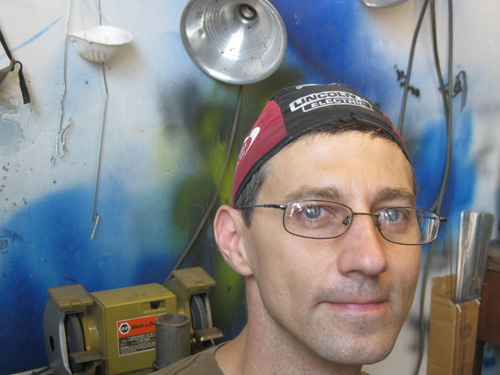 Photo by Nancy A. Ruhling
It's Bernard's dream to be a full-time artist.

"I wanted to make something that was bizarre, fun and confounding," he says. "I would walk past old broken bicycles, and I would feel sorry for the owner. My bike is damaged intentionally, and the planter connects it with nature."

Bernard, who just turned 40, doesn't know whether he'll ever sell enough art to quit his day job. He's dreaming of having a solo show. But even if none of this comes to pass, he'll be in his studio every day creating. 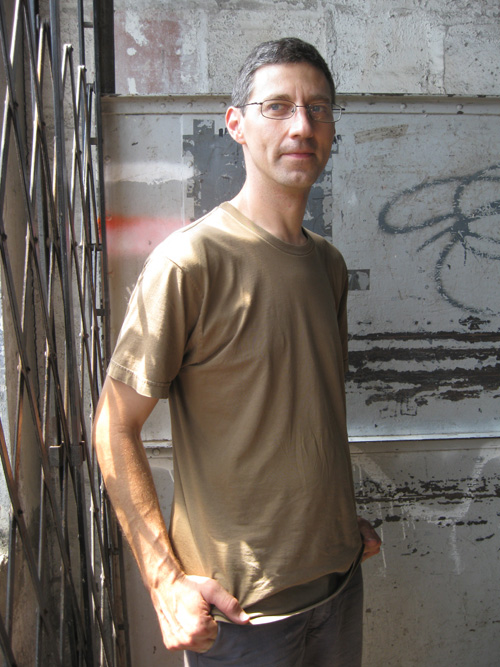 Photo by Nancy A. Ruhling
A portrait of Bernard as an artist.

"I make the art because I feel the need to make it," he says. "I'm here on this planet, and this is something I want to do."