The central aisle of Norwood Rexall Drugs is long and narrow like a train tunnel. It leads straight to Syed Naqvi. The pharmacy counter is tall. Syed is not. 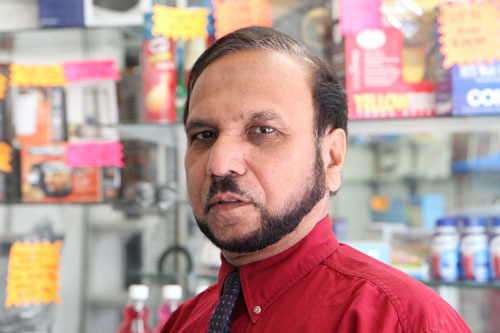 Photo by Nancy A. Ruhling
Syed came from Pakistan in 1972.

You can see only the top of his head under the blue-blooded PRESCRIPTION sign.

Syed, who took over the shop nearly 40 years ago, is just as much a fixture as the weight and horoscope machine at the front door. It, too, is a relic of the past: It no longer tells the future, but feed it a nickel, and you can find out how many pounds you have put on. 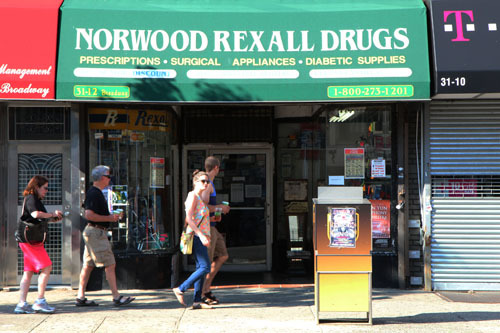 Photo by Nancy A. Ruhling
Norwood is on Broadway at 31st Street.

"Sometimes people don't even come into the store," he says. "They just check their weight. I have to empty the coin slot a lot."

Syed has been the owner and chief pharmacist of Norwood since 1977. He doesn't know how long there has been a pharmacy in this spot on Broadway, but he figures it's close to a century. He was informed that the Rexall sign that wraps around the front window is a rare antique. 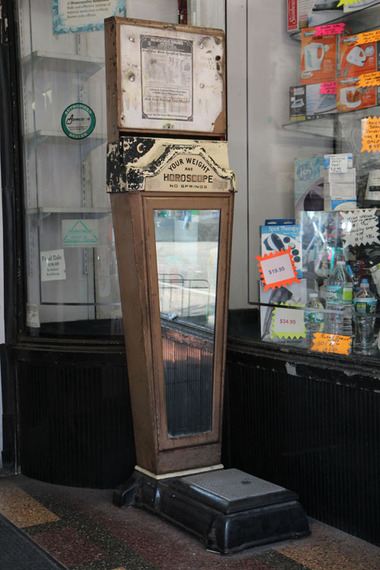 Photo by Nancy A. Ruhling
The horoscope/weight machine out front.

Norwood, he thinks, was the name of one of the two previous owners or had some significance to one or both of them. He kept the name to continue continuity.

Through the years, Syed has settled comfortably into his six-day-a-week routine. This is not to say that he's not adventurous.

He was the first person in his family to leave his native Pakistan. He lived in Karachi, and when he became a pharmacist, he decided to come to America to continue his studies. 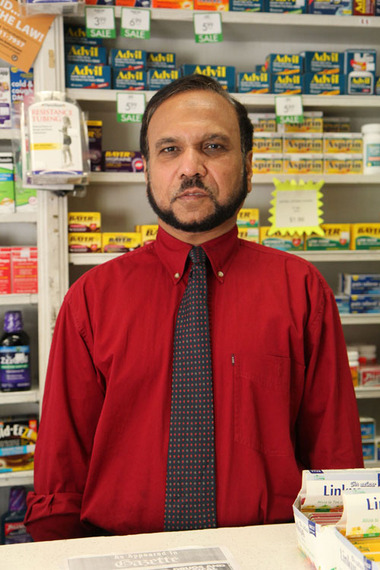 Photo by Nancy A. Ruhling
Syed is the third owner of Norwood.

"My favorite teacher had been educated in America," he says.

He asked for a student visa but, because pharmacists were in demand, he was allowed to become a permanent resident immediately.

"People in my society don't travel much," he says. "I had never been away from my family, I had never been on an airplane, and I only knew British English. People couldn't understand me. When I wanted yogurt, I asked for curd. And when I wanted an elevator, I asked where the lift was." 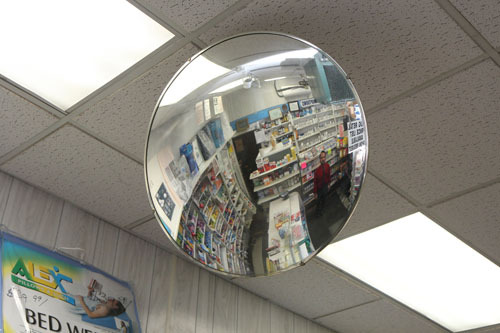 Photo by Nancy A. Ruhling
Norwood is a no-frills drugstore.

After working five years for others and saving all his money, he bought Norwood.

"The price wasn't high because the owner was retiring, and the shelves were bare because he had not kept up with the inventory in anticipation of leaving," he says. "I paid him $20,000 plus some notes, and it was mine. I had to borrow $5,000 from a friend." 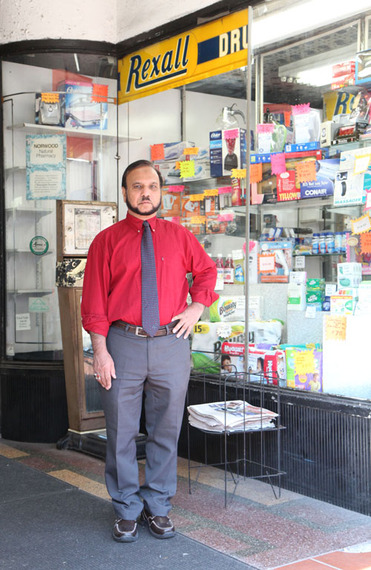 Photo by Nancy A. Ruhling
The Rexall sign is vintage.

Syed, a polite and proper man who wears a traditional tie around his neck and clusters of flashy silver rings on his fingers, worked very hard to make Norwood work.

To compete with a new, up-to-date pharmacy on the corner, he slashed prices, stayed open seven days a week until 11:30 p.m. and offered natural medicines, a novelty at the time. 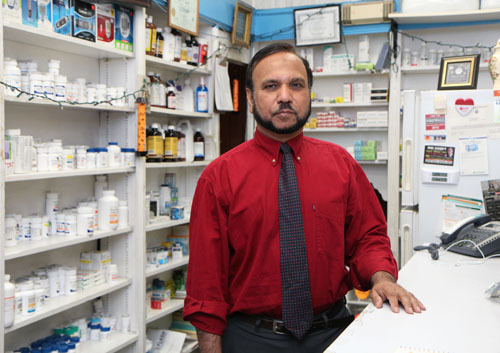 Photo by Nancy A. Ruhling
The pharmacy counter is Syed's domain.

"We distinguished ourselves by offering better service," he says. "We did things like offer free blood pressure screening. It took me five years to make the business profitable."

Doing well was not an option: By this time, Syed had a wife and three children. The family lives in Dix Hills, Long Island. The commute, in good weather and light traffic, is about an hour, but Syed never complains.

On his one day off, Syed pours his energy into the Pakistani American Pharmaceutical Association and the Shah-E-Najaf community center in Brentwood. A Muslim, he's also active in his mosque. 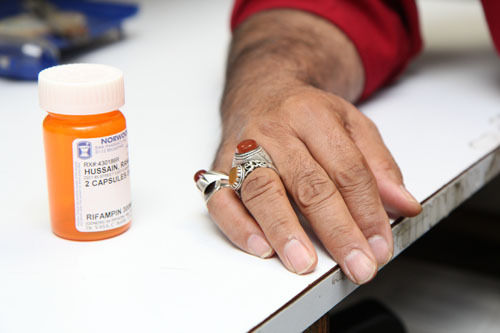 Photo by Nancy A. Ruhling
A prescription awaiting pickup.

Sometimes, Syed wishes that he did not have to work so hard. He's pushing 60, and retirement is uppermost in his mind. This doesn't mean he will do it.

"I love to meet and deal with the people who come in," he says. "I've made many friends through the years."

There will not be a second generation of Naqvis at Norwood. His children are not interested in continuing the business. "They don't like the long hours," Syed says and smiles. 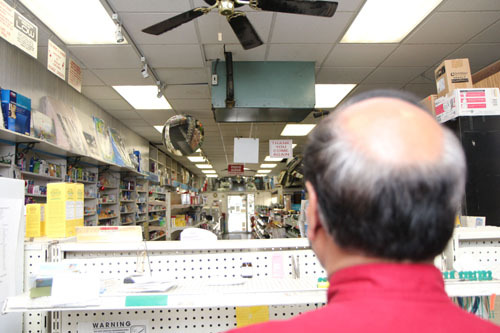 Photo by Nancy A. Ruhling
Norwood from Syed's vantage point.

When he's filled the last prescription, he's likely to sell Norwood. He's weighing a lot of options, but he doesn't know what the future holds. His horoscope machine, after all, is broken.

One thing Syed knows for sure: Norwood will not change as long as he's around.

He has never been able to get more than a five-year lease. At this stage of his life, spending a lot of money to make the drugstore more modern, which is what he's longing to do, doesn't make any sense.