She paints. She writes. She welds. She wears men's Tony Lama cowboy boots and dangly turquoise earrings that fly through her long black hair when the wind blows. Lisa Zilker loves math, science, literature and getting her sturdy hands dirty down to her short, unpolished nails. 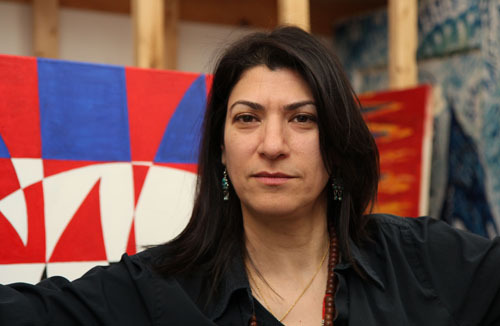 "There is nothing I don't do," she says. "I guess you could say I'm a modern-day Renaissance woman."

But wait. Lisa whips out her iPhone, the one in the hot-pink case, and bends down in the middle of 21st Street. Before any cars come, she snaps a quickie of an old black glove.

She's obsessed with gloves, which she considers the footprints of mankind. So far, she's taken photos of 1,500 and has made a video about them. 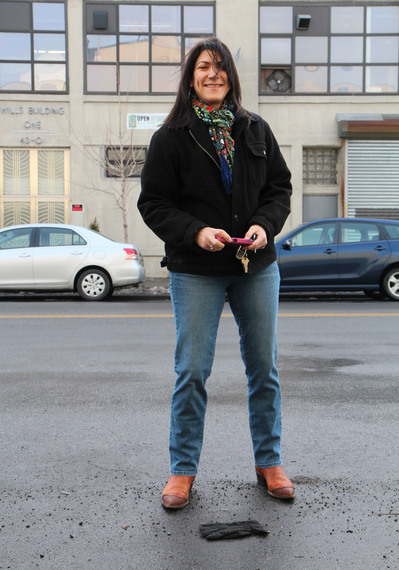 Photo by Nancy A. Ruhling
Gloves bring out the camera in Lisa.

Lisa, a polymath born under the sign of Gemini, started painting in kindergarten and has made art her life and livelihood.

"My grandfather, who liked to paint and build things, gave me my first paint box when I was five," she says. "We used to paint together."

She points toward the back of her studio, a room without a view or an air conditioner. That 8 X 11 landscape that's half out of its wooden frame is one of his. She keeps it for inspiration. 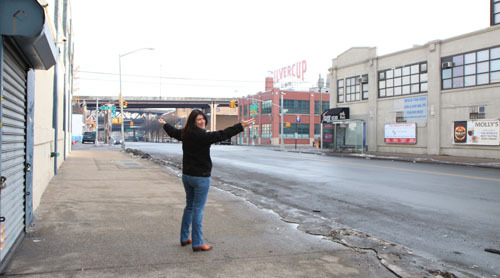 Photo by Nancy A. Ruhling
Lisa loves her studio by Silvercup.

Growing up in Bayside, Lisa painted what she saw, which usually involved the robust sporting activities of her three brothers.

Although her parents divorced before she went to school and her father returned to Israel, her mother's eventual remarriage restored the family unit.

"My mother had easels all over the house for me," she says. "And wherever I went, I was always drawing and painting." 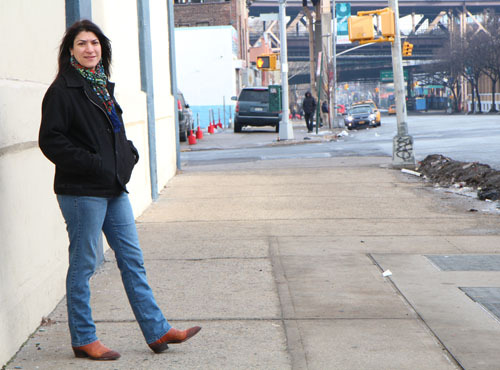 Photo by Nancy A. Ruhling
The painting muse tapped her at age 5.

There was never any question that Lisa would become an artist. When she graduated from Manhattan's School of Visual Arts, she began working in earnest. Collectors from around the world buy her works.

"I don't have much disposable income, but I have a steady paycheck from teaching art," she says. "I know how to live frugally, so it's not a problem."

Almost as an afterthought, she mentions an ex-husband and an ex-boyfriend and a trip to Texas where she bought a bunch of Tony Lamas on sale and drove a rental car 110 mph for three hours through the pouring rain. 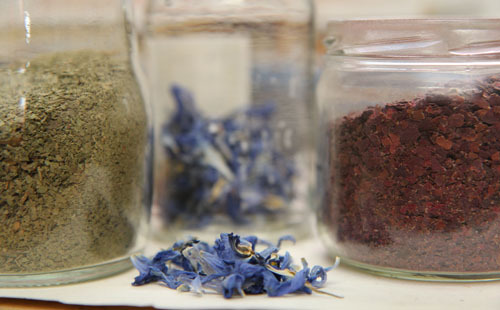 She also tells a story about some really expensive boots she had custom made to irk said ex-husband when he blew his paycheck on big-bucks tickets to a New Jersey Nets game without consulting her.

That's really all she has to say about her personal life. She'd much rather talk about her work, which revolves around three interconnected and overlapping images: trees, geometrics and faceless female nudes.

"Trees are about how things grow and interact, geometrics are about earthy, planetary movement and how we interact politically, and the nudes represent all women and my feminist nature," she says. "They are about atrocities and mutilation done to women." 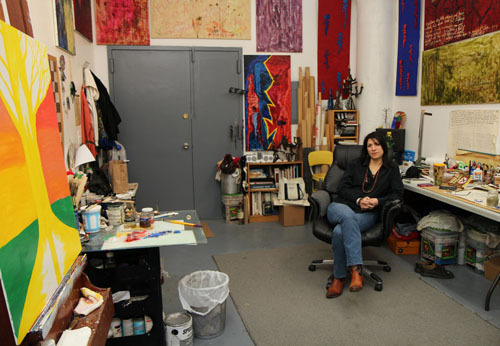 Photo by Nancy A. Ruhling
Lisa's studio lacks windows and AC, but she doesn't mind.

Lisa likes to make her own paint. It's a recipe of linseed oil, wax, cow's blood and fresh flower petals.

"My paint and my paintings are all about life," she says. "I tend to use a lot of blue and red. We are born blue, the color of pure energy in the universe. This means we are perfect, but we also are born in the red of blood. We die red and go into blue again." 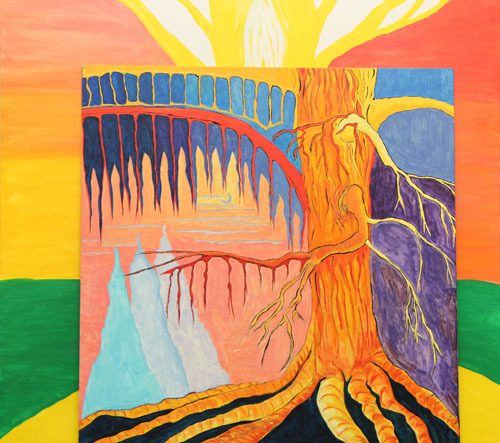 Photo by Nancy A. Ruhling
Lisa's tree paintings are symbols of life and love.

Wait a minute. Let's back up. Cow's blood? Yes, cow's blood. She buys buckets of it from the butcher and stores it in her refrigerator.

"You never get the smell of it out of your mind," she says. "It's as fresh as if you cut it out of a vein. The DNA in the blood line transcends time."

The way Lisa does it, there's more to making paint than merely mixing blood pigments. 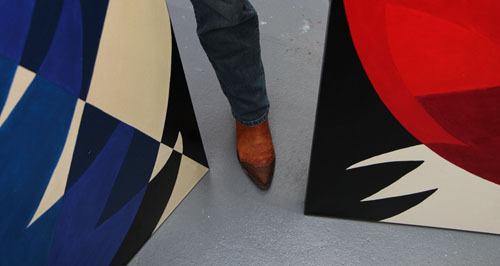 Photo by Nancy A. Ruhling
Lisa and her signature Tony Lamas.

"I used to grind the flowers by hand in an old coffee can with a railroad spike," she says. "Now, I put them in the coffee grinder. I use ground graphite for the black, and soon I'm going to be using ground bark for my tree paintings."

The tree bark -- she wonders why didn't think of it before. She's not going to hurt any trees. She's going to find some that have peeling bark. 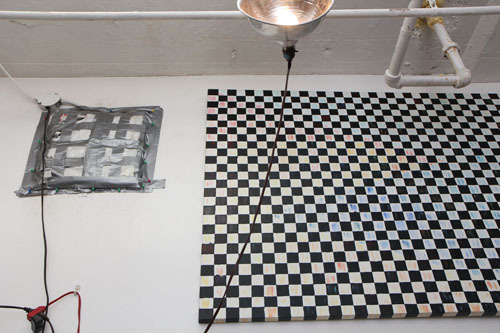 Photo by Nancy A. Ruhling
Lisa's painting and a duct-taped vent hang together in her studio.

Most of Lisa's work springs from her soul spontaneously; more often than not, she fingerpaints. Her thought process is like a circle of life and death. In one instance, she started drawing doors. The doors became portals, which turned into tombstones. 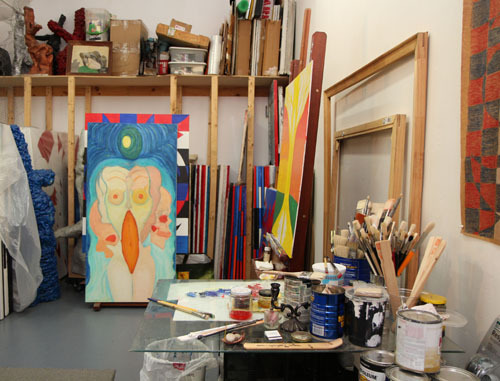 Photo by Nancy A. Ruhling
Lisa's feminist version of Munch's The Scream.

"Have you ever driven in the cemetery at night and seen your car headlights shine on the marble of the headstones?" she asks.

The geometrics, however, require careful planning. She sketches and re-sketches their intricate patterns.

Lisa gets so involved in her work that sometimes she doesn't leave her studio until dawn. "I like to watch the sun rise on my way home," she says. 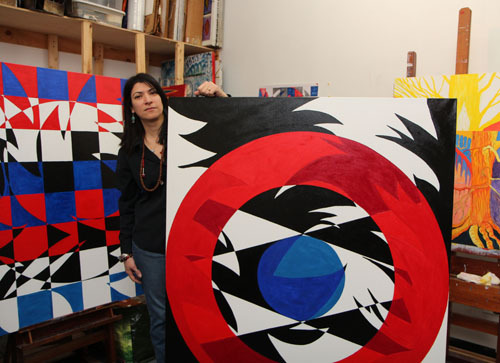 Photo by Nancy A. Ruhling
Lisa's looking for name fame.

Someday, Lisa hopes you'll know her name. She wants to be as famous as Picasso.

But first things first. Right now, there's a tree painting on her easel waiting for her to apply the finishing touches.

"I'm going to gild the trunk and branches," she says. "I was sitting here looking at it when I felt Mother Nature come and wrap her arms around me in an embrace. Trees are life, they are love. Let me give you a hug."