It's not as easy as it looks.

Tony Loupakis, who stands a mere 5 feet 4, grabs the bar of the parallel baam, spreads his legs in a V and hooks his feet, like eagle talons, onto the smooth, bare wood. 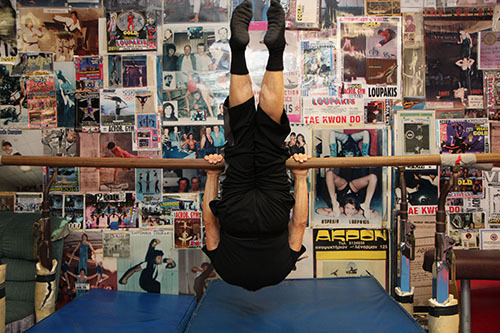 Photo by Nancy A. Ruhling
Tony bets you can't do this.

From this unlikely perch, he zips his legs and shoots his trim torso straight into the air like a torpedo.

He and his 126 pounds of muscle could stay like this, if not forever, then at least for a very long time. But he comes down because he wants me to try it. 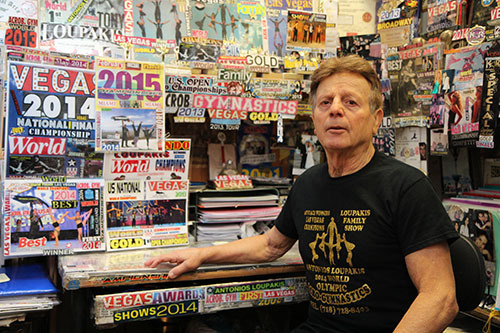 Photo by Nancy A. Ruhling
Tony in his office.

Let's just say that he's right: It's not as easy as he makes it look.

Tony's feet feat is even more daring when you take into account his age. He's 77 or 78, depending on which culture and continent you count the time in. In Greece, where he's from, he's 78; in America, he's still a mere 77. 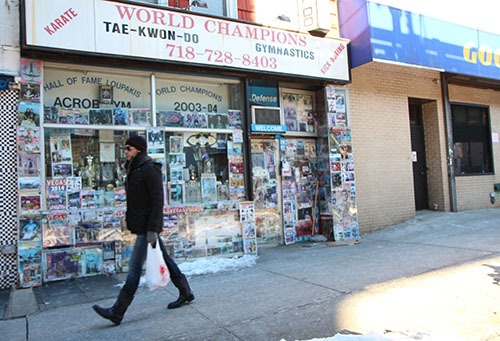 Photo by Nancy A. Ruhling
Loupakis Gym was established 41 years ago.

His son Peter, who has pedaled to Loupakis Gym in the minus degrees of winter snow on his bicycle to serve as interpreter and gym-antics partner, throws his head back and laughs.

Tony, who was on Greece's 1964 Olympics wrestling team, can't wait to demonstrate some of the stunts, what he calls acro-gymnastics, that have made him and his family famous. 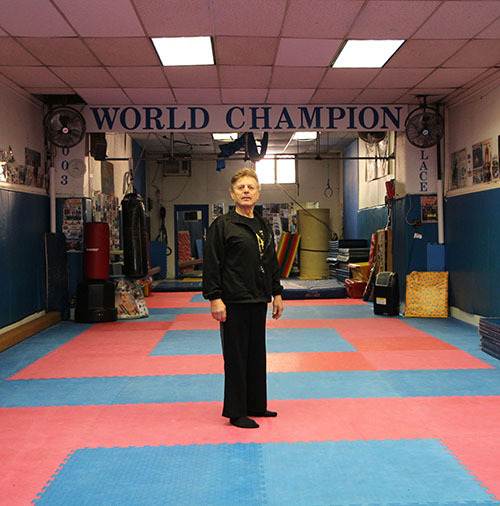 Photo by Nancy A. Ruhling
Tony, king of the gym.

The walls of the gym, which Tony established 41 years ago, are plastered with a patchwork of luminous, laminated Vegas-meets-P.T. Barnum photos that chronicle the family's fabled and unfaded history.

They number in the thousands and form a garish backdrop for scores of gaudy gold trophies and medals that date from then to now. 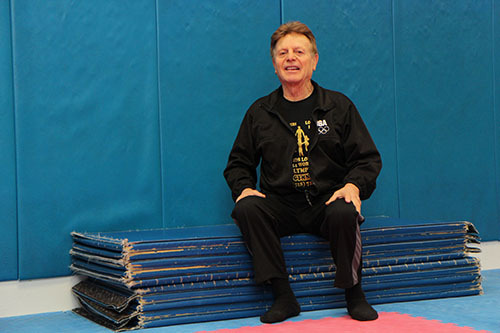 Photo by Nancy A. Ruhling
Tony was on Greece's 1964 Olympics wrestling team.

Here's a picture of Tony in Astoria Park clutching a 20-foot-long pipe in his teeth to suspend a then-teenage Peter way up in the air.

Hey, look at this one: Tony's lying on broken glass with 2,100 pounds on his chest. The mighty weight comes from the players on the Greek national basketball team Tony asked to stand on a board across his body. 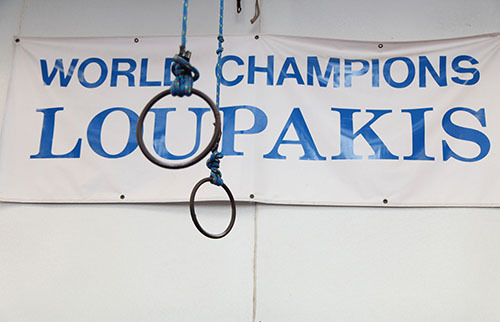 Photo by Nancy A. Ruhling
The sign says it all.

And, OMG, here's one of him doing a headstand on top of two balls set on a spinning table.

Tony, who has more enthusiasm than wrinkles, can still do a lot of this stuff. He's more than ready to show off showing you.

Using Peter as support, he does a couple of suspended handstands then hits the rings for some solo stunts. 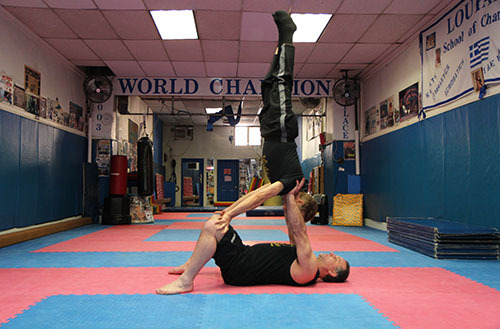 Photo by Nancy A. Ruhling
Peter holds Tony up in the air.

There's no stopping him; he goes back to the parallel bars to do another routine.

Peter just looks at him; there's no way he can keep up with his daring dad. 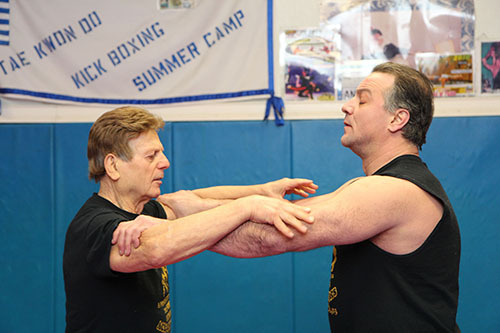 Photo by Nancy A. Ruhling
Getting in sync for the next stunt.

"People always ask me how I can compete with him," Peter says. "I don't. I strive to be him." 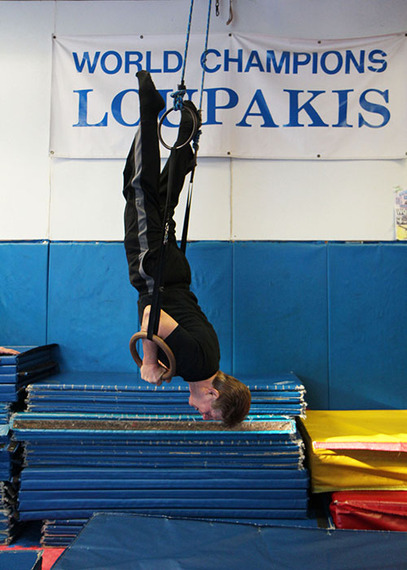 Photo by Nancy A. Ruhling
There's no stopping Tony.

His first stage was a most unlikely one. The son of poor farmers, he and his three siblings grew up on the isle of Crete. He started working as soon as he could walk, doing simple tasks like carrying buckets of water to the house.

"We were so poor that I never had a pair of shoes until I was 8," he says. 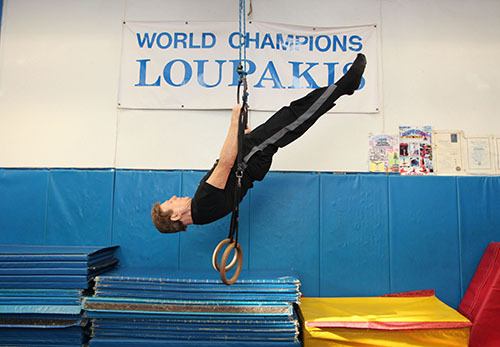 Photo by Nancy A. Ruhling
Balancing, in the zone.

At age 12, he set out to seek his fortune in the big city of Athens, where he had never been and where he lodged temporarily with some distant relatives he had never met.

Armed with a sixth-grade education, he earned his keep as an errand boy in a printing shop. 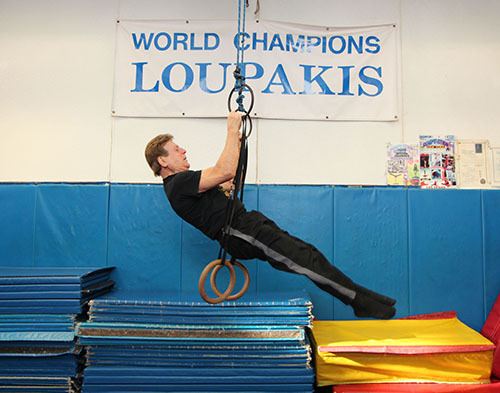 Photo by Nancy A. Ruhling
In complete control for a perfect landing.

As a hobby, he took up wrestling and, later, acrobatics.

"When I was a little boy, I had seen traveling circuses and I became intrigued with their routines," he says. 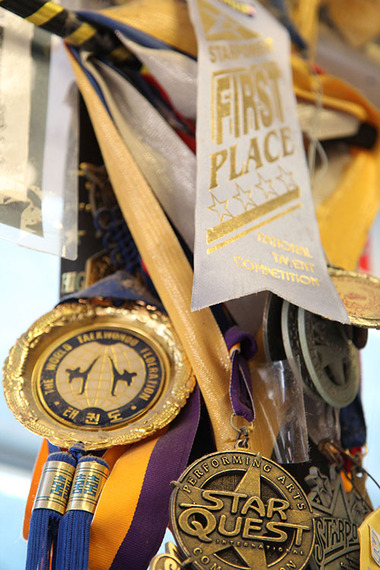 Photo by Nancy A. Ruhling
The medals keep coming.

He did what all Greek boys did: He served in the army for two years.

By the time he was 25, he owned the printing shop and was doing acrobatic performances in his spare time. 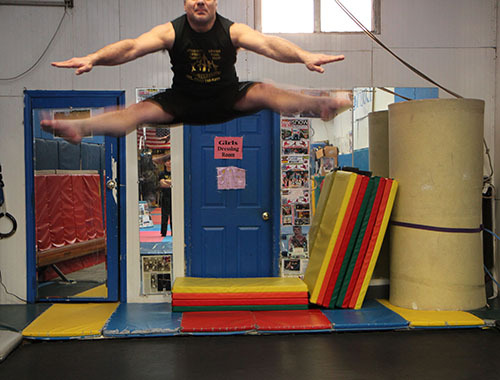 Photo by Nancy A. Ruhling
Peter on the trampoline: It's all about the legs.

Arranged marriages were common, and Tony proposed to a woman after their first meeting.

They had two sons -- Harry and Peter -- who quickly became part of Tony's act.

"My dad has been throwing me around left and right ever since I was born," Peter says happily. "At one point, we called our act Tony and Tarzan. I jumped around on stage in a loincloth. I never recovered from the embarrassment of wearing that costume, but I did recoup." 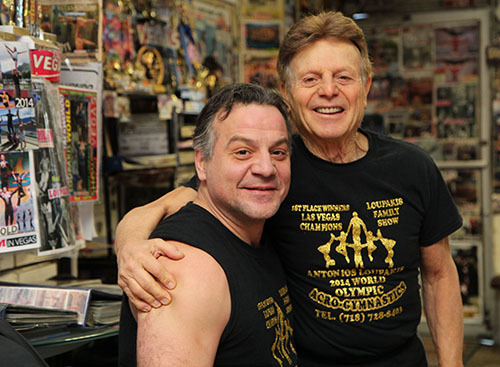 Photo by Nancy A. Ruhling
The Peter and Tony act extends beyond the gym floor.

After seven years, Tony and his wife divorced, and in 1971 Tony moved his sons to New York City, where they lived with Tony's sister.

It was tough going at first. Tony had no money to his name so he took a job as a janitor at St. Patrick's Cathedral.

In those days, the Greek community in Astoria was close-knit, and Tony and the kids were asked to perform their acro-gymnastic shows at big balls at catering halls. 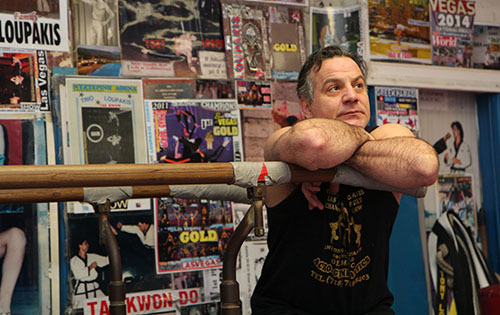 Photo by Nancy A. Ruhling
Peter strives to be Tony.

"People would throw money at us," Peter says. "My brother and I used to collect the dollar bills from the floor."

Soon, people were asking them for lessons. That's when Tony opened the gym.

The act took off and so did the trio: They performed around the world in venues as varied as Venezuela and Germany.

It was on a trip to Greece that Tony met wife No. 2. She was working in a pastry shop by the bus stop, and Tony dropped in for a spinach pie. He was on his way to a date with another woman.

Peter and Tony go into hysterics. Fate is s-o-o funny.

Tony gave her a wedding ring, and she subsequently gave him three additions to the act -- a son and twin daughters.

"Despina doesn't like exercise at all," Tony says as she stops in the gym before going shopping.

The reason she's put in an appearance is that they own the building and live upstairs. There's only one front door. 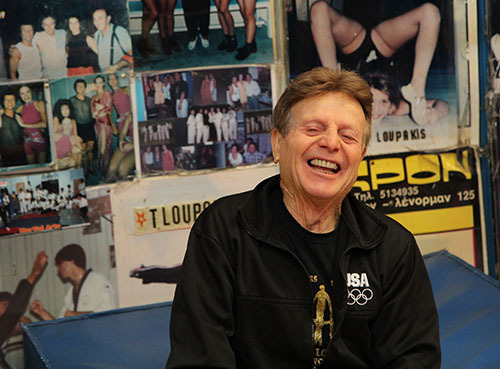 Photo by Nancy A. Ruhling
Retire? Don't make me laugh.

As the family grew, so did its fame. For a dozen years, they did the show circuit and were featured in five Greek-language films. When that dried up, they focused on competitions for their students, who usually take home the top prizes.

Through the years, Tony's children have all been involved in the business. Peter, Gus and Aphrodite, schoolteachers, work there part-time. So did Harry and Aspasia before they moved away.

The future of Loupakis Gym is secure. Peter's daughter, who is in college, has expressed an interest in running the business. But even if that doesn't work out, it won't matter.