On the sidewalk, under the tree, there's a fire-engine-red box with a glass door. It's filled with books for everyone on the block to borrow. 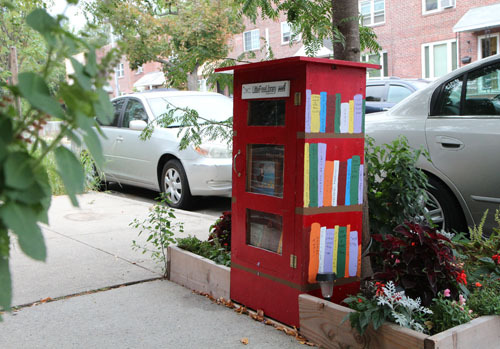 Photo by Nancy A. Ruhling
The Little Free Library on the sidewalk.

Margarita Soto's and Will Bachman's children, 9-year-old Samuel, 6-year-old Alejandra and 3-year-old Veronica, are perusing the volumes as if they have discovered buried treasure.

Out back, there are three cackling chickens running in circles. The family's poodle puppy, Machu Picchu, is chasing them, and Margarita flies out the door to foil a fur-and-feather fight. 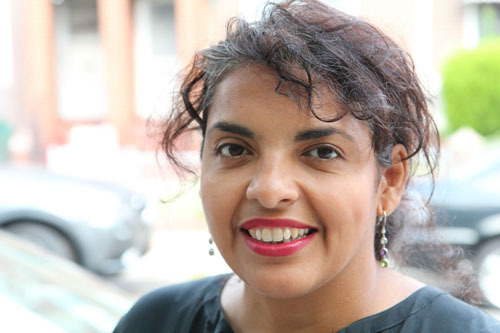 Photo by Nancy A. Ruhling
It was Margarita's idea to make a Little Free Library.

The puppy suitably subdued, Margarita slices some homemade bread. The kids come in with their books, and Will starts playing blocks with Veronica. They are sitting next to a large, flat-screen TV, but it's decidedly not on.

"It's not connected to cable," Margarita says. "We only watch Netflix movies on it. The kids are only allowed to watch them on Fridays and Saturdays. They have never seen a TV show."

The spunky life that Margarita, a self-described community organizer, and Will, a corporate consultant, have created started with the sultry steps of the salsa. 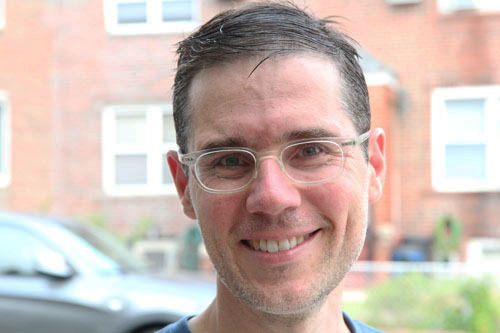 Photo by Nancy A. Ruhling
Will met Margarita at a dance.

In ordinary circumstances, Margarita, a native of Peru who was raised in New Jersey, and Will, a Harvard grad from Connecticut who was a submarine officer in the Navy, would not have met.

It was the summer of 2000, and Margarita, a social-worker-turned-prosecutor, was walking through Spanish Harlem when the music's beat made her heart beat faster. Will was in town for OpSail, and the beat caught his feet, too. 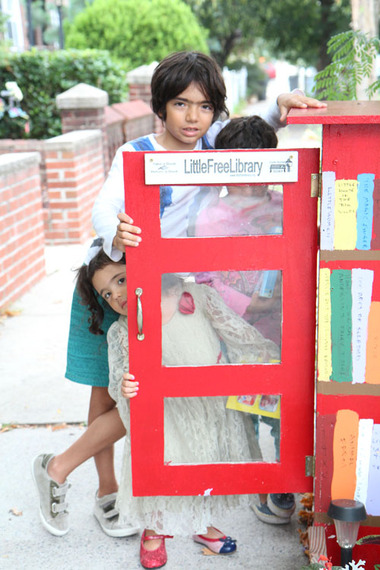 Photo by Nancy A. Ruhling
For them, reading is as essential as breathing.

Margarita, who had someplace better to go, followed the music and stopped a second to ask a stranger named Will to dance. She followed her heart, and he followed her.

"I thought he was weird -- he spoke Spanish and had read the same Latin American novels I had," she says. "He also was brilliant. And funny."

Will doesn't say what he thought, but he doesn't have to. So smitten was he that he arranged to move from Connecticut to New York City, where he landed a job with the business strategist McKinsey & Co. 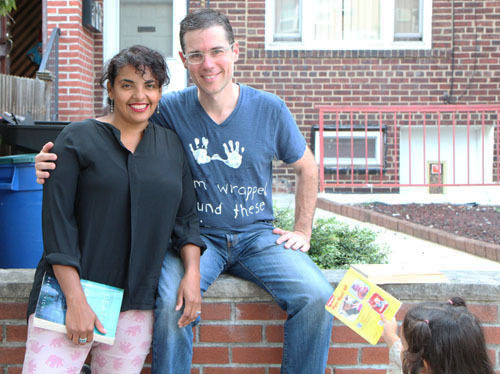 Photo by Nancy A. Ruhling
Veronica asks her parents to read to her.

When Samuel was born, Margarita quit working to focus on family and community-minded projects like the Little Free Library.

As a family, they made the red book box, which has become the talk of the block.

"It's a conversation starter," she says. "We have gotten to know many of our neighbors because of it." 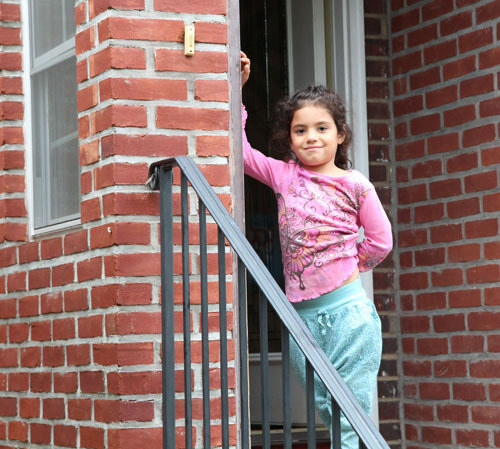 Photo by Nancy A. Ruhling
Alejandra is going to start a monthly book club.

The project was a natural given that this is a family that thrives on the written word.

Will, who likes the stop-and-go style of one red Ked and one green one, just finished Solitary: The Crash, Captivity and Comeback of an Ace Fighter Pilot, and Margarita now has Lois Lowry's Giver series under her belt.

Photo by Nancy A. Ruhling
Chicken and chick.

The children fall asleep to the sweet sounds of bedtime stories, and Will reads to them at least 15 minutes every day.

Samuel hosts a monthly book club, and Alejandra can't wait to start one. Veronica, who likes to wear frilly fairy-tale dresses, can't keep her hands off all the pages in the house.

They love the give and take of books in the Little Free Library. 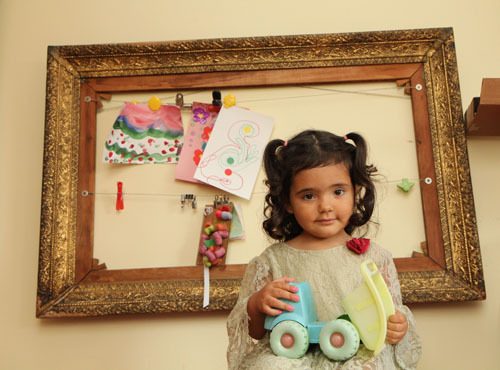 Photo by Nancy A. Ruhling
Veronica playing in the creative room.

"Our philosophy is that a library is like an orchard," says Will. "It has to be pruned regularly to stay healthy."

When the kids don't have their noses in a book, they are making projects in the family's creative room, which is filled with everything from wood and drills to cardboard paper and yarn. It's always a bit of a controlled mess, which is just how everyone likes it.

Margarita and Will also have taken their civic-mindedness to the cinema. They recently completed their second short neighborhood-themed film using only their children and block residents as cast and crew. 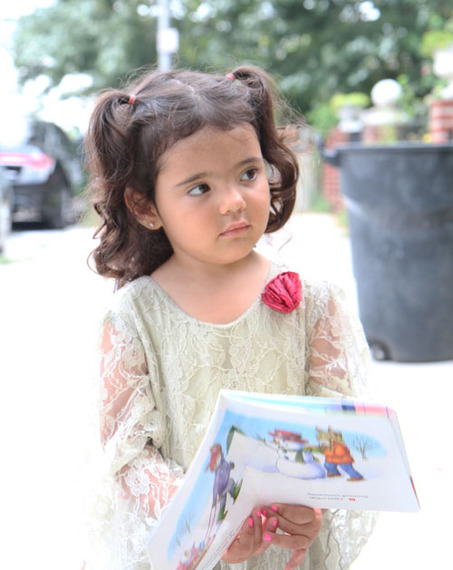 Photo by Nancy A. Ruhling
Veronica makes her choice.

This is not to say that Margarita and Will are homebodies. They travel a great deal.

The children, who are fluent in Spanish and English, have gone to school in Lima, Peru; Cartagena, Colombia; and the Galapagos Islands.

Will brings out a photo of Margarita riding an elephant in India that was taken when Alejandra was 1.

They also spend a lot of time on a farm in Pennsylvania, built by Will's family. It is from here that they get their vegetables and meat. 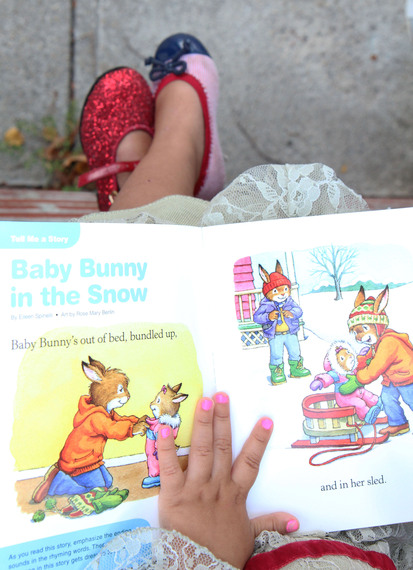 As the children grow, Margarita is deepening her community roots. The founder of Astoria School Symposium, a board member of Serious Fun and a member of the advocacy council of the Citizens' Committee for Children, she recently started the award-winning social-services referral app, Appigi.

"Being a community organizer is my calling," she says. "If I see a need, I try to fill it."

She looks down at Machu Picchu, who is sprawled on the floor snoozing. The dog is six months old. She hasn't been spayed yet. Margarita is holding off. She'd like at least one litter.

"I want the kids to understand how things grow," she says.