It happens every June: St. Antonio Abate makes a four-night appearance on Ditmars Boulevard at his namesake feast.

He's easy to spot. He wears a chocolate-brown robe covered with red, white and green ribbons that stream to his sandals. And he stands statue silent in a bower of fresh flowers topped by an illuminated cross that has as much firepower as the Star of Bethlehem. (More photos.)

St. Antonio Abate, in case you don't know, is the patron of Sicily's Castrofilippo, which is on the map only if that's where you come from. If the guys at the Italian fraternal society who organize St. Antonio Abate's Astoria feast have their figures right, some 20,000 people in the New York City area hail from Castrofilippo. That's far more than the 3,100 who call it home.

St. Antonio Abate carries a gold staff and a heavy load. He's the patron saint of butchers and animals. (Don't even ask.) His forte is curing skin diseases, especially shingles, and he is a miracle worker. He's been doing duty in Sicily for centuries and for four decades in Astoria, the last 15 of them on Ditmars Boulevard between 35 and 38th Streets. 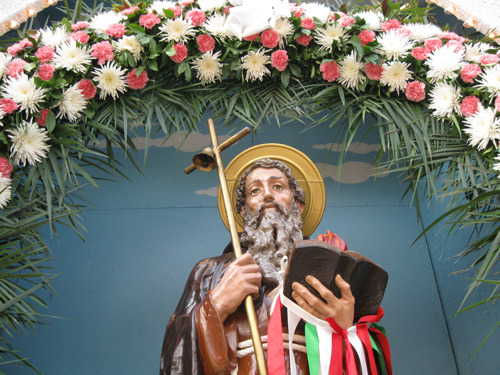 Photo by Nancy A. Ruhling
St. Antonio Abate sees and hears all.

He's a hermit -- he comes out of hiding only one other time each year, Jan. 17. That's when the members of the St. Antonio Abate Fraternal Society of Castrofilippo on Ditmars Boulevard take him out of the club to St. Francis of Assisi Church on 21st Avenue to show their solidarity with Castrofilippo and several other Italian towns that honor him on that date.

St. Antonio Abate is used to living like a monk, and although he has fended off the devil more than one time in his long life, the feast, what with its corny carnival rides, games of chance and street dancing, makes it pretty hard for him to resist temptation. 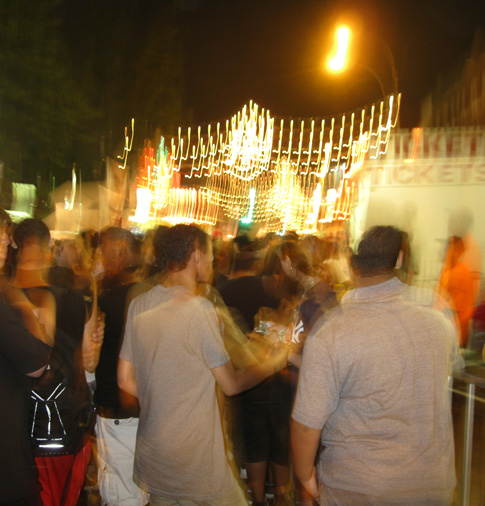 Photo by Nancy A. Ruhling
For 40 years, Astorians have been partying in the saint's name.

Across the street from his shrine, there's a dunking booth called "Soak the Bloke," where a guy with a grease-painted face in a cage eggs on the crowd to prove that he's all wet behind the ears. Next door there's a pretty brunette waving a pair of two-foot-long stuffed bananas and lip syncing to "Que Sera Sera." "Come on," she cries between choruses, "roll a ball and win a prize." 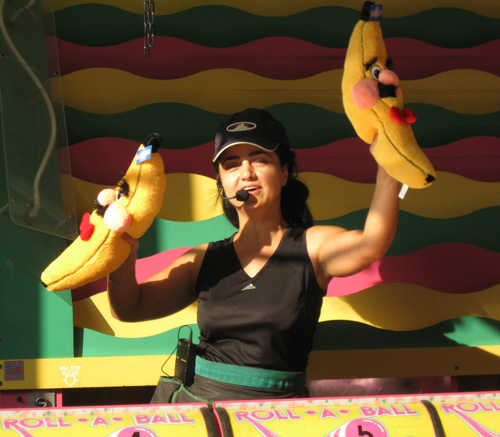 Photo by Nancy A. Ruhling
A carney does a two-banana song and dance.

It's so easy to have fun. Pop a balloon with a dart and win a pink unicorn; go fishing with a pint-sized plastic rod and get a trinket for each catch; toss a snow-white wiffle ball into a fish bowl and take home a live hermit tree crab whose shell is painted in rainbow colors.

Take a break -- have some grilled chicken and roasted corn or try a fried Oreo and a funnel cake washed down with a pina colada in an exotic purple glass. Buy a T-shirt with a picture of the Virgin Mary or Superman; get a temporary tattoo -- the butterflies are waiting to spread their wings on your arm -- or get your photo taken in a giant chair. 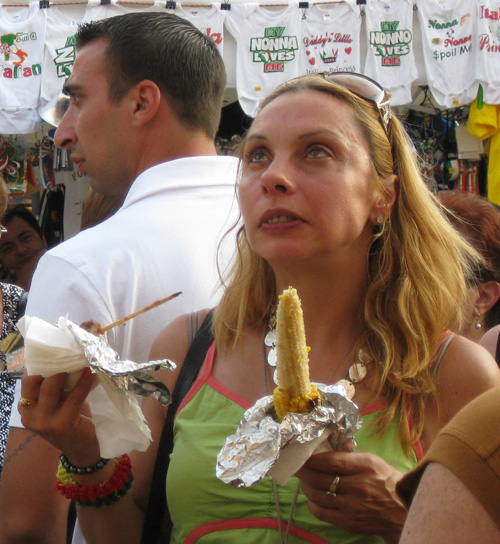 Photo by Nancy A. Ruhling
This is the reason it's called a feast.

Or enter the St. Antonio Abate Fraternal Society of Castrofilippo's raffle -- five chances for only $10! -- to win a scooter, an electric bicycle, a 40-inch TV, a weekend vacation upstate or even a car. Come on, put down your money and put your tickets in the twirling golden drum! What have you got to lose?

Or pin a dollar bill to the saint's beribboned robes. 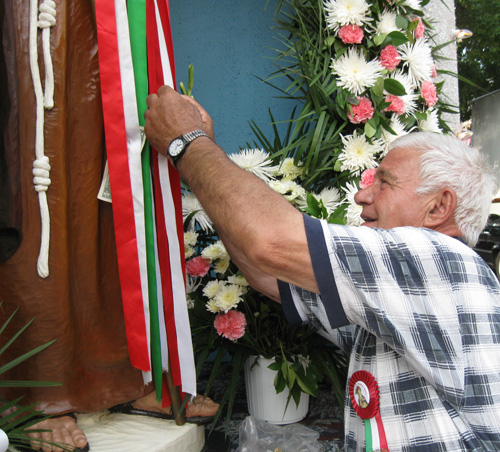 Photo by Nancy A. Ruhling
A society member honors St. Antonio Abate with a donation.

In the old days, the peasants in Sicily brought chickens and other small farm animals as offerings to St. Antonio Abate, but this is New York. Cash is king even on a saint's day.

The money finances the party, which ends on Sunday evening. At 4 p.m. that day, St. Antonio Abate is taken to church for mass then conveyed back to his shrine on a motorized red, white and green float filled with children, including the two lucky little girls who are crowned queens of the feast. 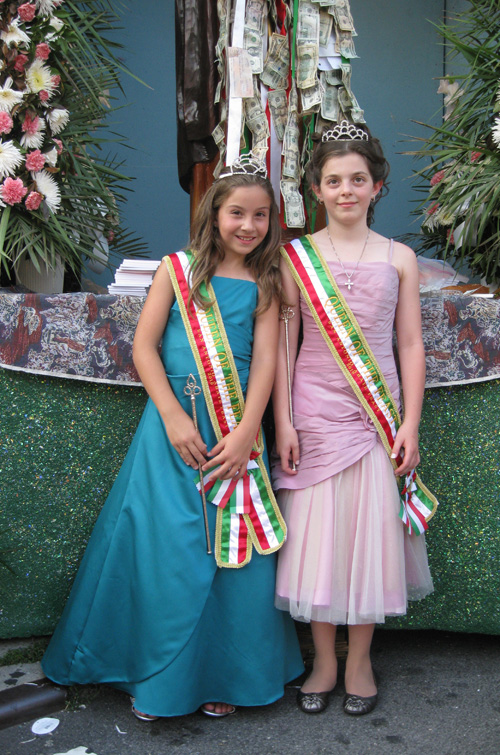 Photo by Nancy A. Ruhling
Queens of the Feast: Isabella Billto, left, and Domenica Cinquemani.

The society foots the bill for the feast, whether it's feast or famine. St. Antonio Abate took a vow of poverty when he decided to follow Jesus, so any profit is sent to a nursing home in Castrofilippo. "It's not about the money," says one society member who is a native of the village. "It's about tradition." 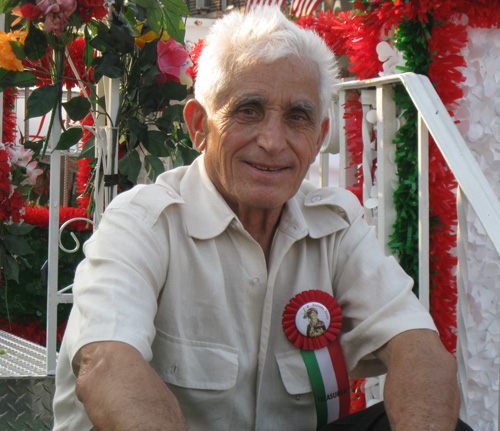 Photo by Nancy A. Ruhling
A society member keeps tradition alive by manning the float.

St. Antonio Abate gazes upon the partygoers. He doesn't disapprove of the frivolity that's being perpetuated in his name. But he hasn't so much as tapped his foot to the sound of the DJ's disco/pop music. He may be a real saint after all.

As the feast progresses, the faithful revelers line up, and like guys at a strip joint stuffing a fiver in a G-string, they pin their bills -- and their hopes -- on St. Antonio Abate. It isn't long before he's clothed in a suit of greenbacks -- $1s, $5s and even $10s and $20s. 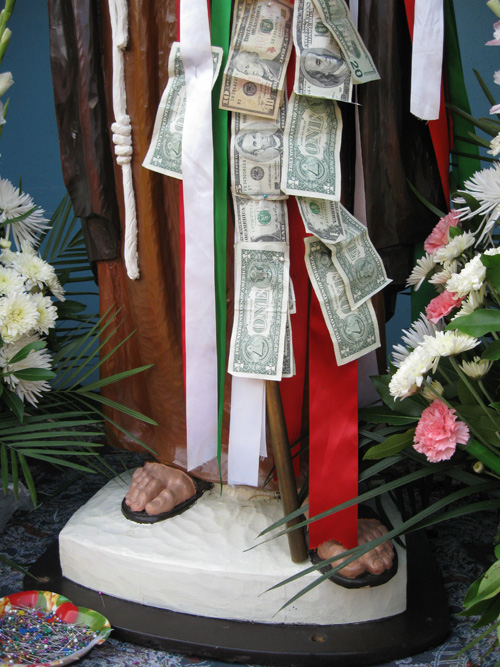 Photo by Nancy A. Ruhling
St. Antonio Abate all dressed up in his donated duds.

A woman looks up to him as she fishes her wallet out of her handbag. She pins a $10 bill to his ribbons, makes the sign of the cross and continues on her way.

A carney barks to her back, "Only $5 for three balls!"

St. Antonio Abate beams at her from on high as the merry-go-round twirls some giggling girls.