I live around the corner from a private high school. If I ever need to be reminded of this fact, all I have to do is look up in the sky. 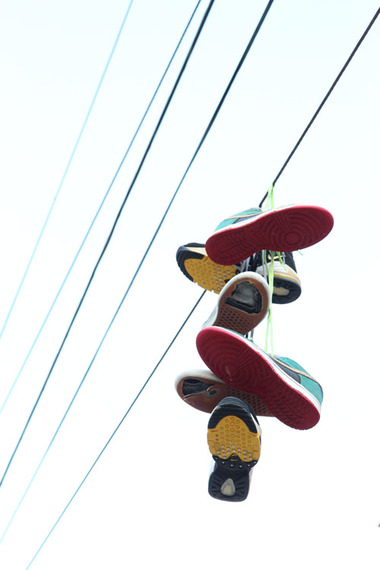 Photo by Nancy A. Ruhling
Are they lonely at the top?

There, dangling dangerously on the high wires of the telephone poles, are sneakers strung up like Christmas tree lights. They look as though they're running away. From what, I don't know.

I can't help but wonder why the shoes were so callously tossed to the sky.

I suspect it has something to do with marking off territory because the perimeter of the college prep is protected by an aerial fence of footwear. 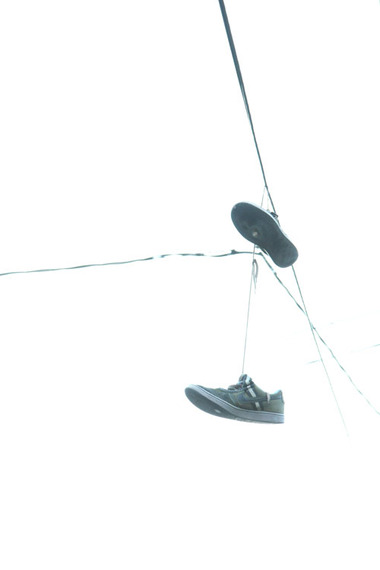 Photo by Nancy A. Ruhling
Why are they up in the air?

I've never seen a teen pitch a pair into the air, so I can't tell you how much skill it takes.

I suspect it's akin to shooting a basket because shoelace by shoelace, the sneakers multiply like rabbits during the school year. 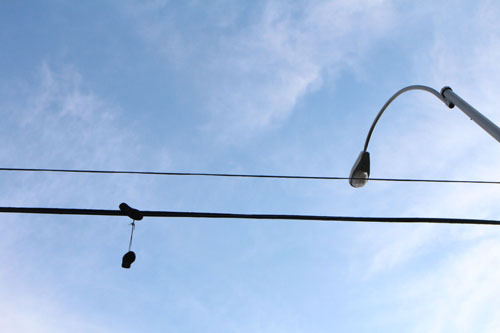 Photo by Nancy A. Ruhling
Does any closet weep for them?

It may be a rite of passage. Could it be that seniors graduate and hurl their caps -- and shoes -- into the air as they run, barefoot, away from childhood?

I'd like to think that these stellar students are taking their cues from their history books. After all, things do repeat themselves.

It's possible they got the shoes-on-the-brain idea from Nikita Khrushchev, who led the Soviets during the Cold War. 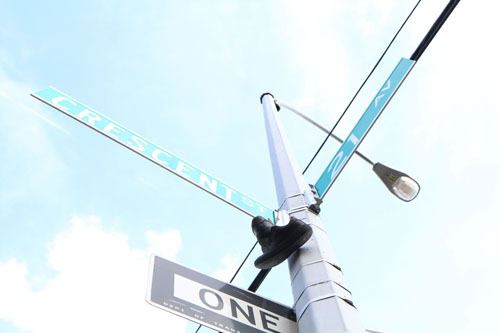 Photo by Nancy A. Ruhling
What steady arm pitched them here?

In 1960, when things heated up at the United Nations, he pounded his shoe on his desk.

He probably did this because throwing it on a wire was not an option: He scorned shoelaces, always wearing loafers or sandals.

Nearly a half century later, in 2008, it was an Iraqi broadcast journalist who made headlines when he threw his size 10 shoes at then-President George W. Bush at a Baghdad news conference.

He missed -- both times. 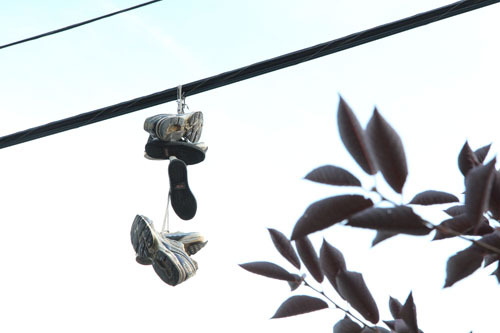 Photo by Nancy A. Ruhling
What did they do to anger their feet?

For this feat, which is considered a high insult in the Arab world, Muntadhar al-Zaidi got a three-year prison term. His shoes reportedly suffered a rougher fate: They were destroyed.

I've studied the shoes outside my front door, and they offer no clear clues as to why they are there.

Most of them look as though they jumped from the shoebox to the wire. Some have been worn, but it is by weather not feet. 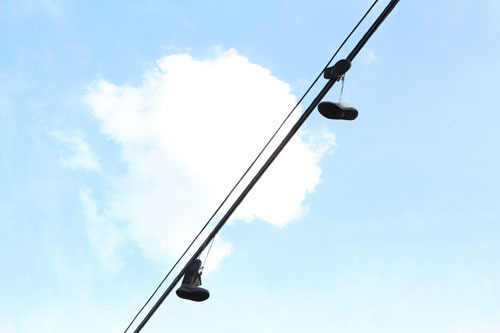 Photo by Nancy A. Ruhling
Are they doomed to die on the wire?

There was nothing more to do but go directly to the source. I stopped a pair of preppies wearing school uniforms. They swore they would never, ever do such a thing to an innocent shoe, but, curiously enough, they had no trouble offering me a couple of explanations.

He said: "Kids do this to pick on others because most kids nowadays care a lot about shoes."

She said: "From what I understand, it's to mark turf. It's usually shoes kids don't want."

They walked away, their own sneakers intact, satisfied that they had enlightened me.