The smoke swells as the souvlakis sizzle. 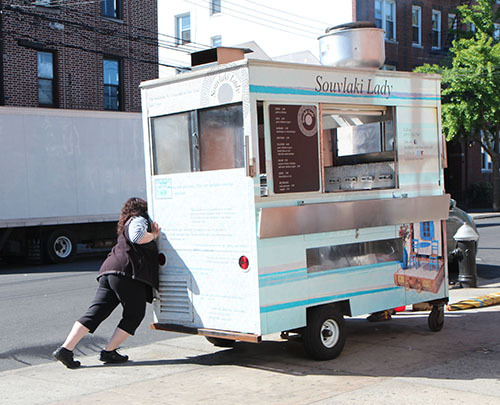 Photo by Nancy A. Ruhling
Elpida pushes her pushcart onto her corner.


They sear swiftly, so Elpida Vasiliadis has to turn them promptly while she's serving the people who stop at her pushcart.

For the last quarter century, which is half of her life, Elpida The Souvlaki Lady has been stationed on 33rd Street at Ditmars Boulevard. 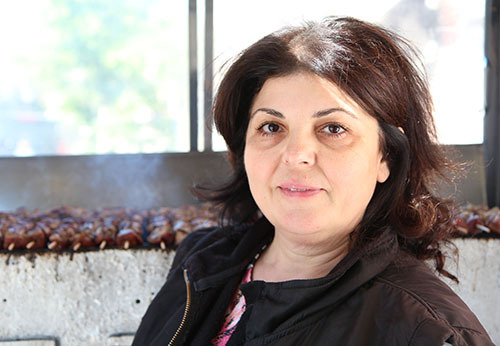 Photo by Nancy A. Ruhling
Elpida has been The Souvlaki Lady for 25 years.

When she started, her son and daughter were young, and she lived around the corner, so she could see them playing in the yard as her mother-in-law baby-sat.

It's hard to believe how quickly the time has passed. Elpida, who keeps her long black hair corralled in a ponytail and white baseball cap, is a grandmother, and she's serving souvlaki to a third generation of customers.

Elpida learned to cook when she was a girl, and her souvlaki recipe is the same one her mother used in their family restaurant. 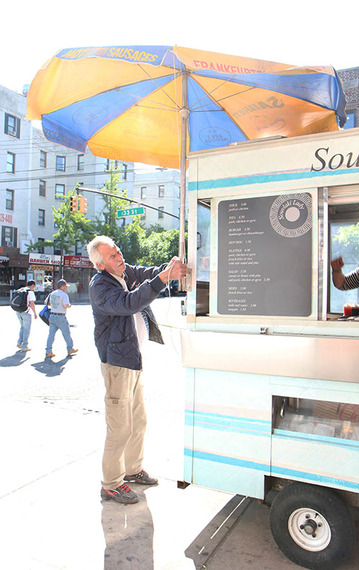 Photo by Nancy A. Ruhling
George helping set up.

Her parents, who are natives of Greece, started their lives together in Germany, which is where Elpida, the baby of three girls, was born.

When she was 13, they sent her to live with her grandmother and aunt in Thessaloniki, Greece, because they wanted her to go to Greek school. Three years later, the rest of the family followed.

Elpida helped out in the restaurant, which is where she met her husband, George, and how she ended up in Astoria serving souvlaki from the sidewalk. 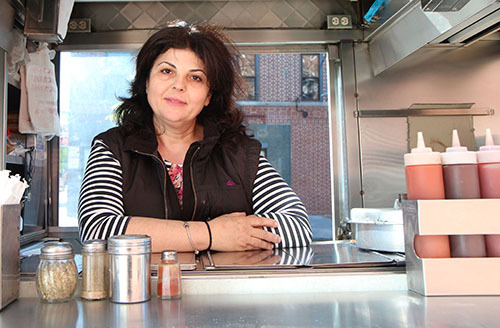 Photo by Nancy A. Ruhling
Elpida waiting for the lunch crowd.

"I fell in love with him because he was very tall and very handsome in his army uniform," she says. "I got married when I was 18 right after I graduated from high school."

A year later, Elpida had a baby, and they moved to Astoria, where George's parents lived. 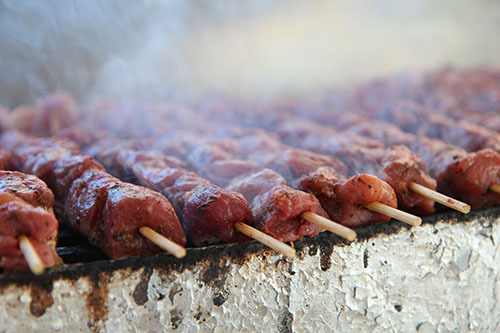 George started a construction company, and Elpida stayed home to take care of the baby. She enrolled in a community college but was tugged back home by the birth of her son.

"George didn't have steady work, so we bought the 33rd Street pushcart, which had always been there," she says. "In the early days, George worked there when he didn't have jobs, and I took over when he did."

It was not exactly a booming business. 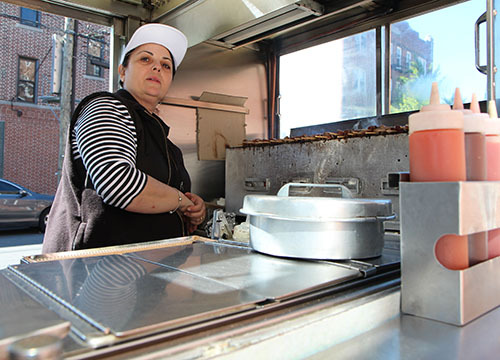 Photo by Nancy A. Ruhling
She works 12-hour shifts six days a week.

"In the 1980s, nobody here knew what souvlaki was," she says. "My first customers were Greek, but they thought of it only as a snack, not as a lunch."

Elpida doesn't remember exactly when, but at some point, she started manning the pushcart solo.

Things continued much the same until the family moved to Greece 15 years ago. They planned to stay forever, but two years later, they came back, settling in Jackson Heights. 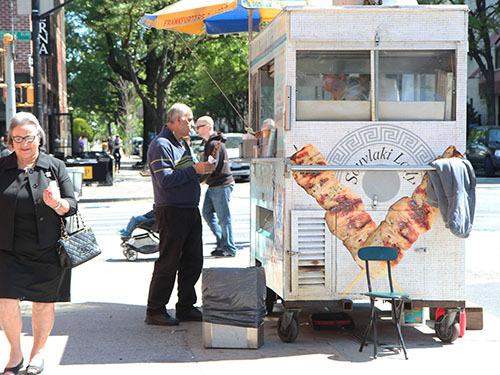 Photo by Nancy A. Ruhling
A noontime nosh.

"We opened a restaurant in Greece and put most of our savings into it, but it didn't work out," Elpida says. "I rented the pushcart out while I was away."

"It only takes me an hour to prepare the food and drive here," she says. 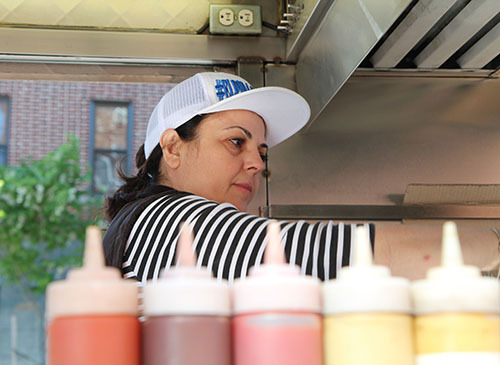 Photo by Nancy A. Ruhling
Elpida in the kitchen.

This year, she bought a bigger pushcart emblazoned with the words SOUVLAKI LADY and expanded her menu to include pitas, hamburgers, hot dogs and salads.

She doesn't say how much the pushcart cost, but her menu, which offers free delivery, ranges from $1 to $6, so it's safe to assume she's had to sell a quarter-century worth of $3 souvlaki sticks to afford it.

"This is the first time I've had a cart that's big enough for me to stay inside it," she says excitedly. "I used to stand or sit outside." 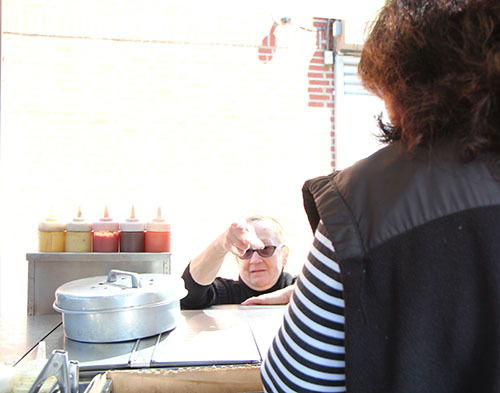 Photo by Nancy A. Ruhling
Elpida has served generations of Astorians.

Still, it's not what most people would call luxurious, much less comfortable. There's no AC, and the heating is spotty. But there's a fan to send the smoke away. 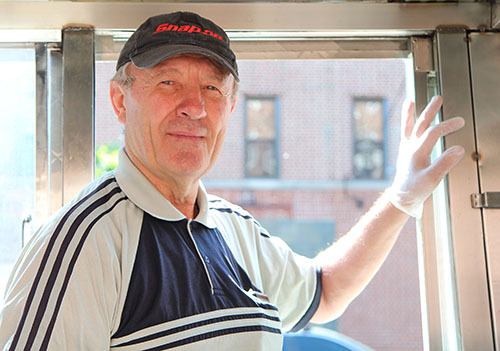 There are days, especially when the weather is too hot or too cold or the snow is too deep, that Elpida dreams of retiring. But that's as far as it gets.

She and George just bought a second house in Jackson Heights to use as a rental property, and there are many renovation bills to pay. 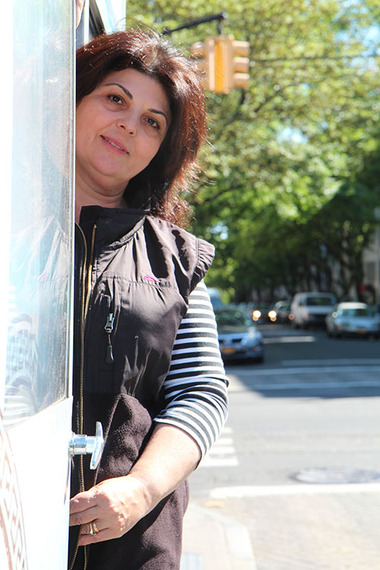 Photo by Nancy A. Ruhling
Elpida sometimes thinks about retiring.

When Elpida, who just turned 51, does sell the pushcart, it will not be to her children.

"I didn't even let them work here when they were growing up because I was afraid they would start making money and not want to go to college," she says.

It's lunchtime, and there's a line. 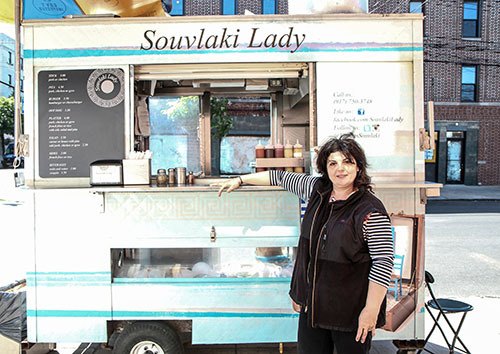 Photo by Nancy A. Ruhling
Elpida at her corner: 33rd Street at Ditmars Boulevard.

"It's a lot of work and hours, and I'm tried and want to stop," she says as she hands over an order. "But the customers are so nice."

Elpida turns around just in time to turn the souvlaki.