It started in Cyprus with a little girl and a big dream. "I used to climb out on the balcony of our house and close my eyes and open my arms and say, 'I'm going to fly away.'"

Panayiota Pelengaris is used to putting her time to good use, so as she talks, she threads a needle. The beautiful buttercream cashmere sweater, soft as chick fluff, has a half dozen moth holes she needs to repair before the morrow.

By the way, before we go any further, Panayiota says it's best to call her Patricia or Pat. "Nobody in America can pronounce my name," she says, her silver thimble flashing in the morning light to the mindless motion of her stitch, stitch, stitch. 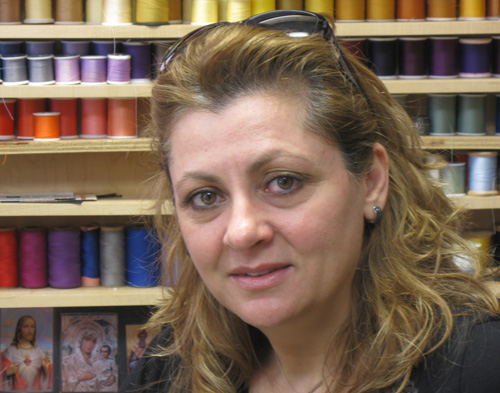 Photo by Nancy A. Ruhling
Patricia's a tailor by trade, a dreamer by day.

For nearly a quarter century, Patricia has been the owner of the establishment on 23rd Avenue at 28th Street that she named A&E Cleaners for her children, Alex and Eleni.

One day, her little-girl wish came true. In 1976, five weeks before her 16th birthday, she was flying to America -- on a plane, not a balcony.

"When I got to the airport and saw my dad and all the people there waiting for me, I got scared," she says. "I must have looked ill because the security people came. That scared me even more. But they were nice. They took me to the office and gave me juice and made sure I got to my father." 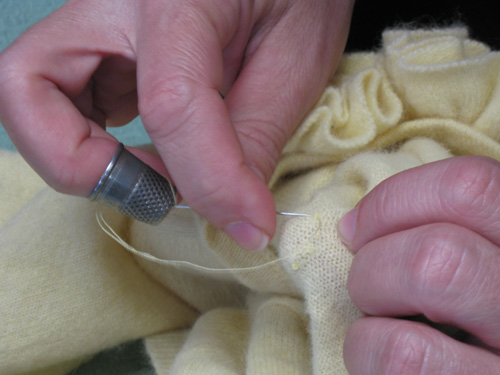 When she awoke the next morning in her new home of Astoria, the ground was all white. "I ran out of the apartment in my bare feet," she says, her big green eyes, accented by sparkling gold eye shadow, widening in wonder. "I had never seen snow before. It was so beautiful! Right from the beginning, I loved America so much that I never wanted to go back to Cyprus."

Patricia had passed high school in Cyprus and had had two years of special training in clothing design, so she was ready for her first American job. 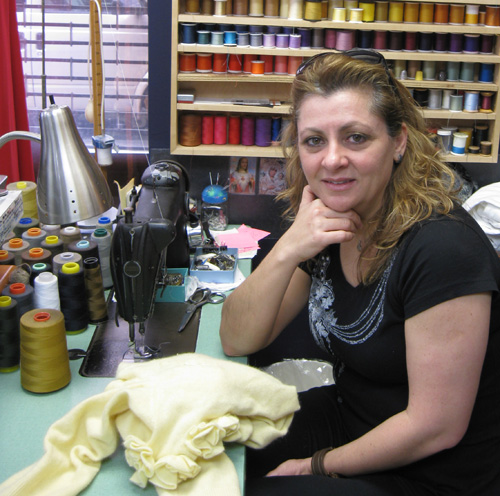 Photo by Nancy A. Ruhling
Patricia and her Singer are always on duty.


She landed a position in a book factory, where she was the youngest worker. "I was clearing about $95 a week," she says proudly. "It was a lot of money, enough that I could buy food for the week and send money home to my mother, who came several years later with my two younger brothers."

Some of the first money she earned went for a camera. "I used to go into the store every day and look at them," she says. "Finally, the owner said to me, 'Why don't you take a camera and pay me off every week?' So I did."

Later, she worked in a clothing factory, where she was paid 10 cents to 15 cents per piece. "I didn't like it," she says. "I once put the wrong colors of fabric on 14 dresses, and the boss told me to take them home, tear them apart and re-do them there so I wouldn't waste time at work." 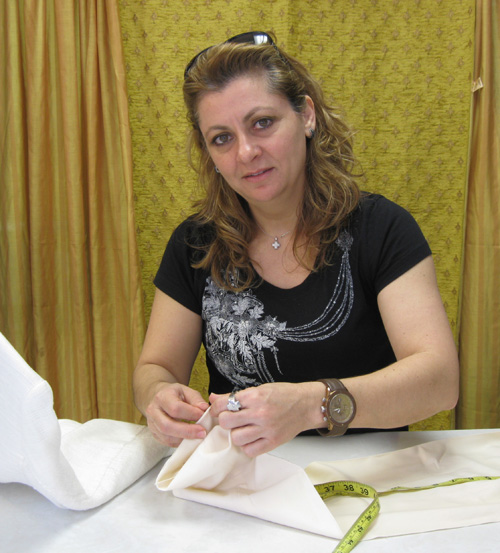 Photo by Nancy A. Ruhling
Patricia measures her success by the length of her happiness.

That's when she got a job at a dry cleaners. She and her boss then bought the establishment on 23rd Avenue, and eight years later, when he retired, she took it over.

"In the beginning, it was tough," she says, adding that her mother, who lives with her, takes care of Alex and Eleni while she's at work. "I was very young, and I had to gain people's trust. So I started telling them, 'I will repair your clothes, and if you don't like what I do, you don't have to pay me.'"

It worked, and she found herself working 12-hour days. She's on the premises six days a week, from 7 a.m. to 7 p.m.; four days a week, she has a part-time helper. The clothing is sent out to be cleaned, so most of her time is spent making alterations and repairs on a Singer that's old enough to be her great-grandmother.

A&E could stand for Artistic and Elegant. It's doubtful that there's any other dry cleaners in the world that has an illuminated lamppost at the counter where the clean clothes are hung. Its amber bulb casts a soft glow on the arched floor-to-ceiling gold-flecked mirrors and the potted plants, which are taller than Patricia. 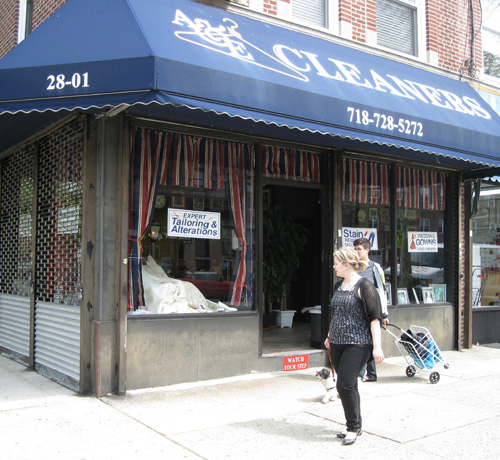 Photo by Nancy A. Ruhling
A&E Cleaners, the little shop on the corner, is Patricia's pride and joy.

She doesn't sleep in the shop, but that doesn't mean she hasn't thought about it. In the back, behind the counter's golden drape, she keeps a small refrigerator stocked with juice and chocolates, and there's a makeup mirror. When she's running late, she washes her long, honey-hued hair in the bathroom sink.

Patricia, who is often seen jogging in Astoria Park early in the morning, lives on Upper Ditmars with her husband and two teenagers. She walks to and from the shop nearly every day, a half-hour trip each way.

"When I walk, I live the seasons," she says. "I see the flowers, and I hear the birds singing, and in the fall, I love to feel the autumn leaves under my feet."

Often, she takes her camera, a Nikon D60, with her. "I take photos every day," she says. "My vacation time is when I take most of them. People tell me I have a good eye."

The framed photos over her clothes counter are gorgeous landscapes of Greece and France that look as though they are reprints from Travel & Leisure. "Every picture I take has a piece that comes from my heart," she says. "I like to go new places and see new things."

Patricia claims that she gets bored easily, but she's not tired of running the dry cleaning shop even after all this time. It's true that she would like to design clothing. Years ago, she tried to get a custom clothing business going, but nobody was interested.

"I believe I could be very successful at it," she says. "I'm always looking at fashion magazines and changing the styles around in my mind, adding a pleat here or there." 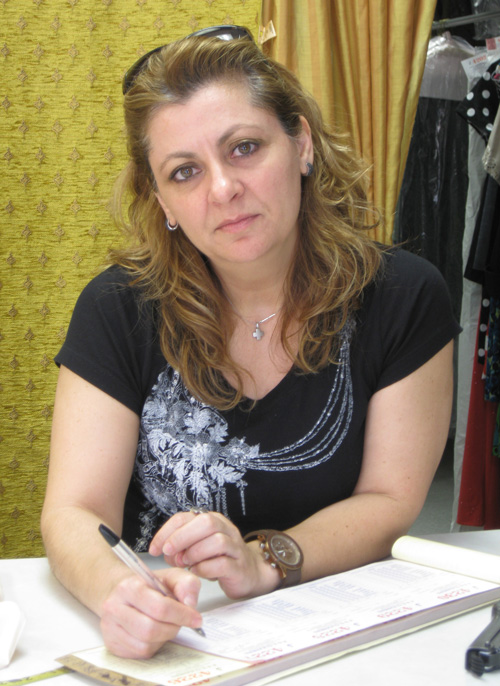 Photo by Nancy A. Ruhling
With a faraway look in her eyes, Patricia sets her sights on the new day.

But right now, that's just another balcony dream. "I'm very happy for my life," she says. "I'm glad I never changed who I am."

Like all great tailors, Patricia is an expert in alterations, but she also knows when to leave things alone.

"Being adventurous at heart," she says, "coming to the shop every day is another challenge for me. I don't see myself doing anything else for a living."