Casey Fatchett picks up his camera. Now he feels more at ease. 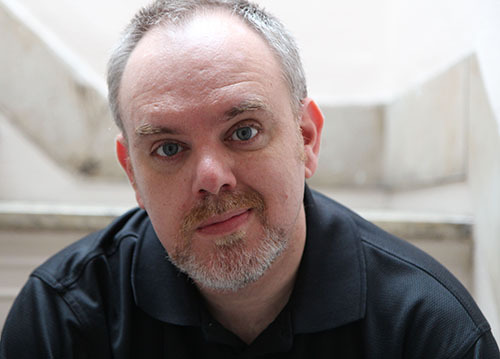 Photo by Nancy A. Ruhling
Casey's an award-winning wedding photographer.

He's always the one taking the pictures, and he doesn't know what to do when the eye of the lens is pointed in his direction.

The only other time Casey was in the picture occurred four years ago when he married Caroline. A couple of his photographer friends did the honors, capturing him doing some serious kissing and some silly dancing in his kilt.

Casey, who has recorded nearly 400 couples exchanging vows in the past decade, sees weddings as sentimental stories. 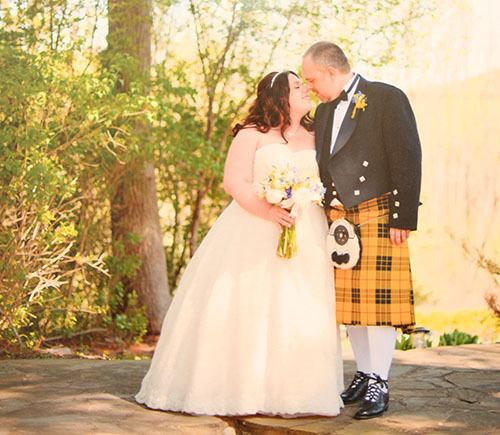 Photo by Nancy A. Ruhling
Caroline and Casey on their big day.

"I'm the lucky one who gets to tell them," he says, grinning.

Before we proceed, let's get something straight. Was it Caroline or Casey who said the L word first?

After a little back and forth and reminders of this and that, they decide that it was, indeed, Casey. 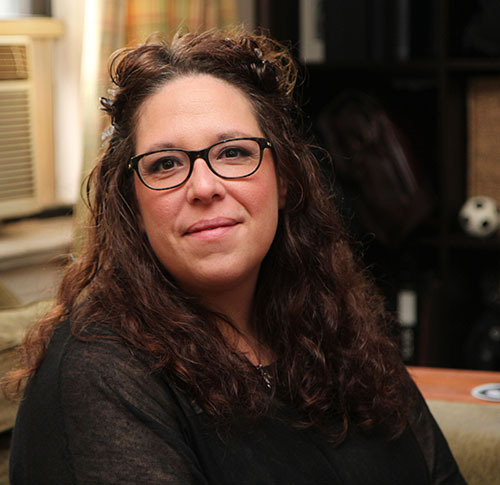 Photo by Nancy A. Ruhling
Caroline and Casey met online.

He had just returned late at night from a wedding, and he came to her apartment to pick up Tyler, his Maltese.

"She was giving me a shoulder massage," says Casey, an unflappable guy with big blue eyes and a large laugh. "And I just blurted it out -- 'I love you.' We had only been dating five months." 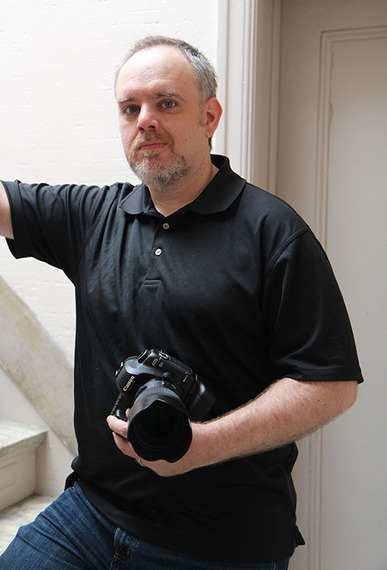 Photo by Nancy A. Ruhling
Weddings are his stage.

"I got scared and just kept talking," Casey says. "Then there was this long silence. We both started laughing nervously."

They met online a decade ago, and as it turned out, they had a mutual friend. That relationship fueled theirs.

It was around that same time that Casey started focusing on wedding photography. 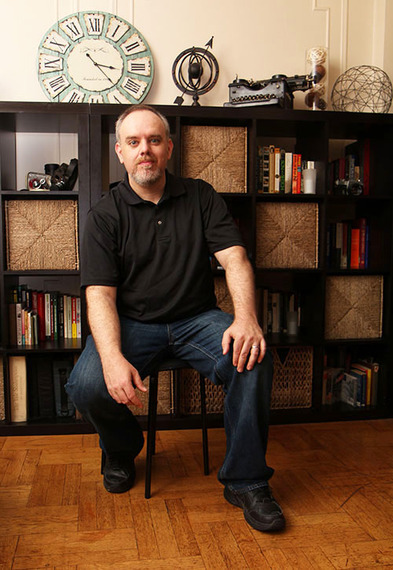 Photo by Nancy A. Ruhling
He's fixed many a malfunctioning gown.

A native of Parma, a pint-sized pit stop in Michigan, Casey got his first camera when he was about 10.

"My dad was a fire investigator, and he used to take photos of crime scenes," Casey says. "He also took a lot of family photos and made it look like fun. By the time I was in high school, I had delved into photography. I loved capturing the moments of events."

In college he majored in theater and journalism. He came to New York City to make a splash on the stage. 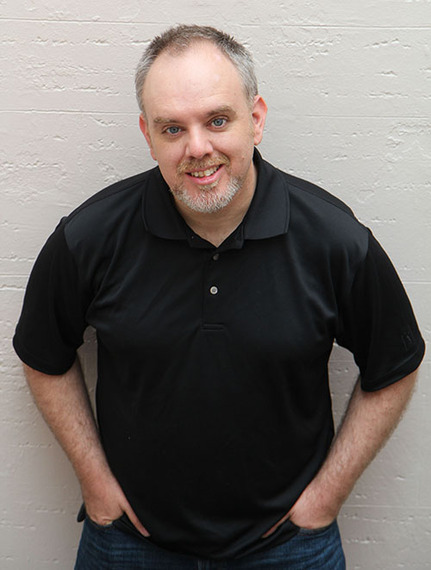 Photo by Nancy A. Ruhling
Casey chases the excitement of the event.

"I was especially interested in doing Shakespeare," he says.

Between auditions, he started taking headshots of his actor friends and when they got married, he began bringing his camera to the weddings.

"Several of them told me my photos were better than the ones of the hired photographer," he says, "and they encouraged me to start doing wedding photography." 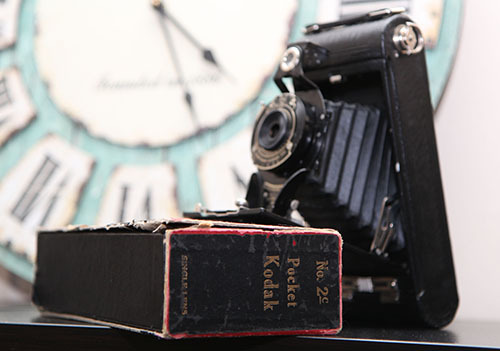 Photo by Nancy A. Ruhling
He has a collection of antique cameras.

He was hooked when he took his first "I-do" shot.

"I'm a very sentimental person," he says. "I even get misty-eyed at cute commercials. To me, weddings are like theater -- there's a lot of performance pressure, and I always get a little nervous in anticipation of going on the stage. I know I have to get it right the first time."

Even when love goes right, a lot can and does go wrong at these emotionally charged celebrations. In Casey's case, the war stories are love stories. 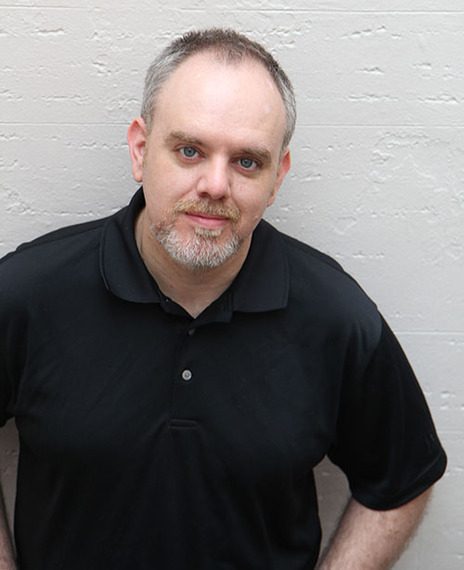 Photo by Nancy A. Ruhling
He's always ready for adventure.

"My theater training really has come in handy," he says. "I've been asked to do everything from emergency surgery on a bouquet and a bridal gown to restraining the jealous sister of a bride who kept trying to get into every picture."

Recently, he bought a heavy-duty harness to hold his gear. 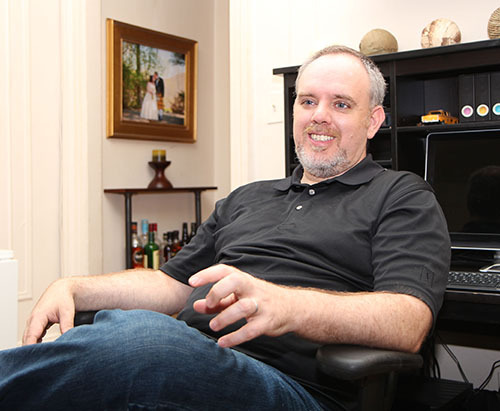 "I thrive on the excitement of these live performances," he says. "When I see 'the shot' I get a warm, fuzzy feeling."

And, Caroline adds, he "does his little dance."

Casey sees himself as the recorder of history, also bringing anniversaries and birthdays into the picture. 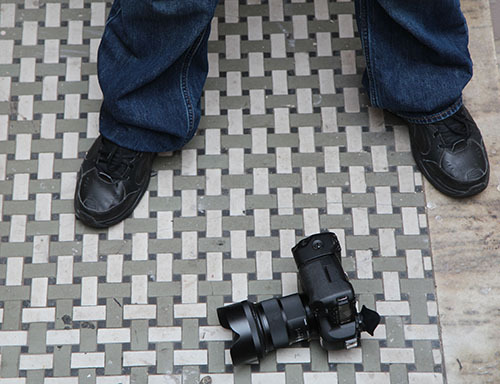 Photo by Nancy A. Ruhling
A signature shot.

"Photos are like time travel," he says. "They allow you to go back to the moment and relive it."

Casey, who can't imagine doing anything else for fun or for a living, is eager to capture couple No. 400. If he keeps up his pace of 25 to 30 weddings a year, he'll easily top 1,000 long before it's time for him to shutter his career.

"It's an honor when a bride and groom choose me to record their big day," he says. "It's very personal for me because I'm creating the first heirlooms of a new family."

And that, he says as he packs up his Canon, is a huge responsibility.