It's a microchip, one-bedroom apartment, and they are a family of four, so there are certain compromises that must be made.

They're in the living room/office/playroom/dining room/family room. Jarda Nehybka is cutting some whole-wheat bread to go with the salad he's made.

Martina, his wife, is holding one-year-old Simonek, who is hurling magnetized alphabet letters off the filing cabinet like missiles.

Maximek, who is nearly three, is racing cars on the carpet.

Jarda smiles. He never thought he'd have a wife and two tow-headed toddlers, not at this age, 69. 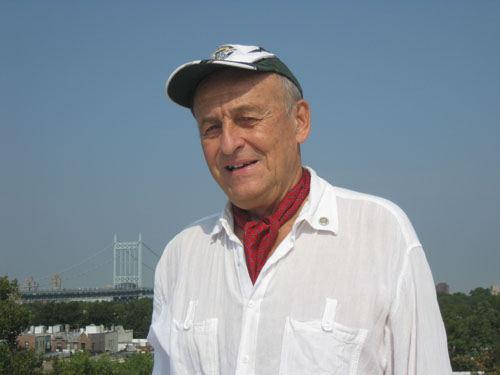 Photo by Nancy A. Ruhling
Jarda, 69, is a new father of two.

He pats the top of Simonek's head. "It's not golden color, it's more like platinum," he says proudly.

Don't worry: the doctors have told Jarda that he's bound to live into his 90s, and he's bound and determined to stretch that to at least 140.

He's reading a book that tells him all the tricks and is placing his faith in rapid advances in genetic engineering. 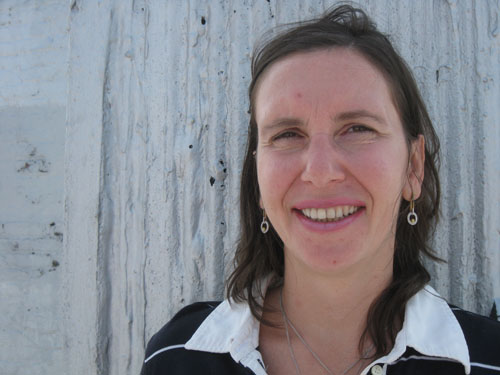 Photo by Nancy A. Ruhling
Martina says life with Jarda is a big adventure.

He eats a special spice-based diet: the salad is made with 17 spices and herbs, three oils, including garlic, along with flaxseed, vinegars and hot peppers.

He swims, bikes and skis with the boys and adheres to holistic medicine and green practices. He doesn't own an air conditioner -- a small fan cools his small space -- and keeps the heat on low. The apartment is equipped with an air purifier and a machine that alters the pH levels in water.

The 6-foot-4 Jarda, whose family name means "will not be moved," is fearless; he has faced the Great Golden Tunnel of Death twice. He knows he can beat the odds again because "I've received the promises from God."

Maximek brings him his red ascot and drops a toy plane at his feet. Sneakers, shorts, baseball cap and the ascot; somehow Jarda, who has a flair for the theatrical, pulls this improbable look off. 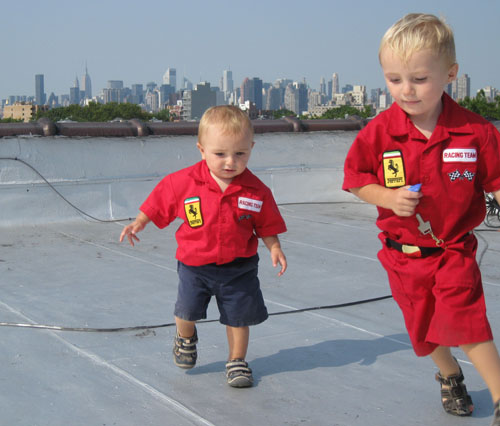 Photo by Nancy A. Ruhling
Simonek and Maximek racing on the roof.

Jarda, who was born during World War II and raised in the southern Moravian city of Brno, comes from a distinguished and well-to-do family that traces its roots back to at least 1557. It was Oskar Schindler who introduced Jarda's father to his first wife; she died 10 days after childbirth. Jarda's fond memories of his home country cease after 1948 when the Communists seized his family's property.

He learned the cruel, hard facts of life when he was 10. "My teacher told me that because I didn't join the Communist Party and because I came from a bourgeois family that I couldn't even be a bricklayer," he says. "So I said, 'Don't worry; I'll go to New York.' And the whole class laughed."

By the time he was 15, he started working in construction. "I couldn't get a permit to go to high school full time, so I had to take a job," he says. "I could only go to school part time, so it was like working double shifts. My opportunities were limited, so I had to become a structural engineer."

It was a career that suited him. Before he knew it, he had become the vice president of a company. "I still wanted to come to New York, but it was hard to leave because I was making more money than I could spend," he says. "But I was determined to leave because I didn't want to raise a family under communism." 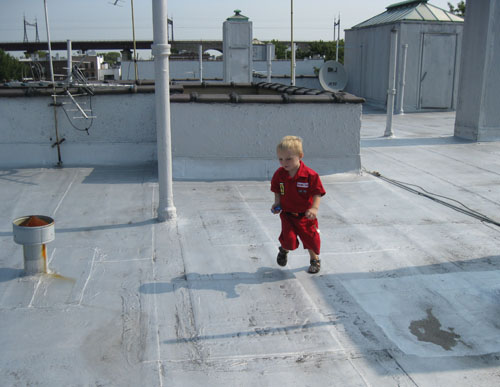 Photo by Nancy A. Ruhling
Maximek tries to hide from his brother.

When he arrived in New York in 1980 for a three-month study trip, he never returned to his country. "Everything I owned was confiscated, and I was sentenced to 3 ½ years in jail so I couldn't go back," he says. "I only had $250 in my pocket."

But he had a lot of ambition, and through the next three decades, he worked as an engineer on major projects in 17 U.S. states as well as in Europe and Asia.

He also took an apartment across from the Bohemian Hall & Beer Garden, where seven years ago he stopped in to have a drink at the wine festival. Martina, who is a financial adviser, did the same.

"She approached me and tried to sell me property," Jarda says. "Now, she's the co-owner of everything I have."

Jarda didn't think of her as a potential mate; after all, at 33 years his junior, she's young enough to be his daughter. 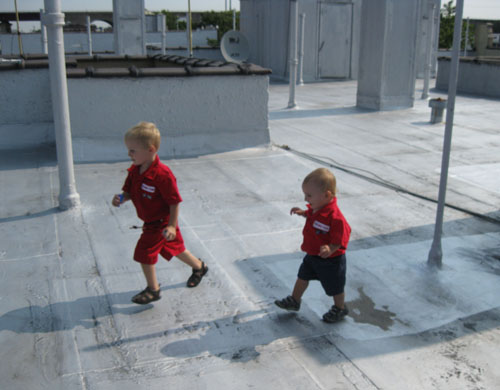 Photo by Nancy A. Ruhling
The boys love playing together.

But Martina, who is from western Bohemia, found him "very special and charming -- and never boring."

Two years later, when they were working on a project for the hall, she told him she wanted to stay with him.

"She was still calling me Mister," Jarda says. "I went to the doctor for tests; he told me that I had the health of a 36-year-old, and Martina said, 'That makes you only seven years older than I am, so what's the problem?'"

Ten days later, they were married in City Hall. "We washed our hands in the fountain in Federal Plaza, which was one of the projects I worked on, and sat under the sycamore trees," Jarda says.

These days, Martina's a full-time mom and Jarda, who has temporarily been forced into retirement because of the recession, does daddy duty 24/7. 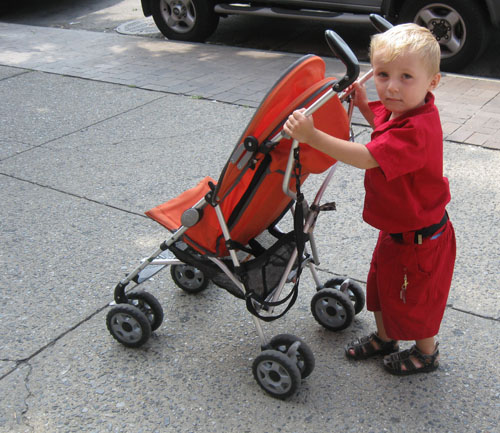 Photo by Nancy A. Ruhling
Maximek leads the way for the walk.

"We are both willing to start over again," Jarda says. "We are both educating ourselves to prepare for new jobs. We are big dreamers for the greatest USA, and we want to be part of that future."

For Jarda, that future means rebuilding the country's infrastructure and designing energy-free houses for the world. For Martina, it means finding a way to use her financial and IT skills to make a significant contribution to society.

"We are expecting that the best ever will come no matter what the circumstances," Jarda says. "Like our name, we will stay steadfast, we will never give up even in time of great pain and struggles."

They dream of building a LEED-certified, multifamily house in Astoria that would include space for at-home businesses and an education/sports training center for children like Maximek and Simonek. They want to share their successful lifestyle with the world.

"In Astoria, we are considered an example for excellent marriage and family," Jarda says. "Our boys are loved, well-known and welcome everywhere." 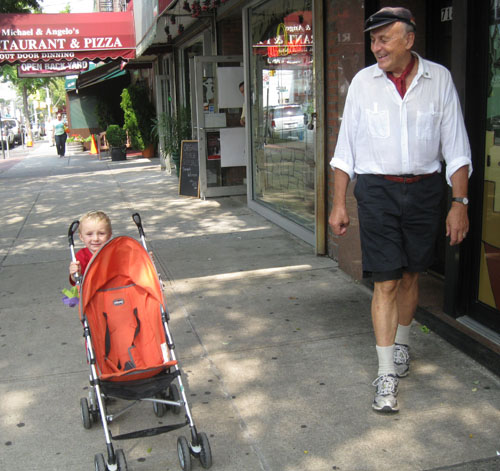 Photo by Nancy A. Ruhling
A leisurely stroll through the neighborhood.

The boys are soaking up knowledge at an accelerated rate. Jarda remembers how hard it was to learn English, so he's happy to report that Maximek knows words from 10 languages.

"We would have no objection to having three more children," Jarda says.

Martina doesn't confirm or deny; she's busy keeping her eye on the boys.

When it's time to leave, Jarda and Maximek lead the way to the door. It's a Moravian custom to walk a guest home. Maximek kisses the cross and the mezuzah nailed on the wall at baby-lip height.

As father and son walk down the stairs, they count the steps. A language for each half flight: English, Czech, Greek, Spanish, Polish, Italian, Latin and Spanish. The last flight is Hebrew, which Jarda doesn't know, so Maximek chants alone.

When they reach the lobby, Maximek grabs his orange stroller and pushes it full speed ahead.