There's a baby grand in the living room, but when Phyllis Chen sits down to play, it's at the child-size cherry-red toy piano. 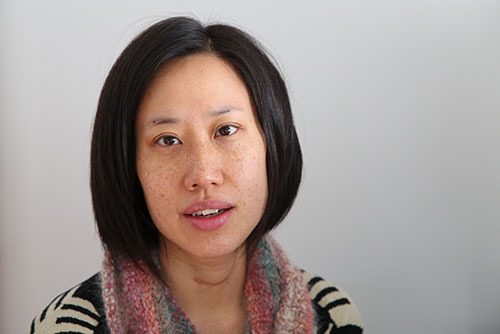 Photo by Nancy A. Ruhling
Phyllis, who plays a baby grand and a toy piano.

Her knees almost touch her hands, which fly across the kiddie keys, creating cascades of catchy, chiming melodies.

"Toy pianos don't have strings, they have metal rods," she says, explaining the bell-like sounds that are floating through the air. "They're percussive." 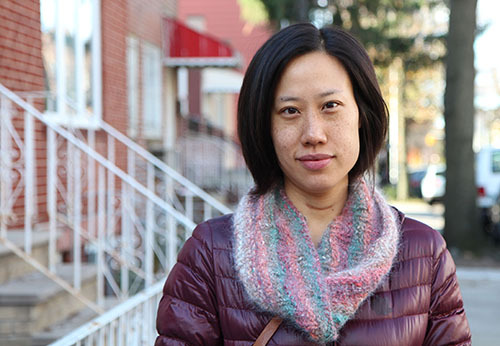 Photo by Nancy A. Ruhling
Phyllis grew up in Virginia.

Phyllis, slim and tall and serene, grew up playing a full-size piano. The baby grand, in fact, is the one she practiced on during her childhood.

It's only in the last eight years that she has fully embraced the baby-baby grand, making it the star of five records and live performances in venues as hallowed as Carnegie Hall and Lincoln Center. 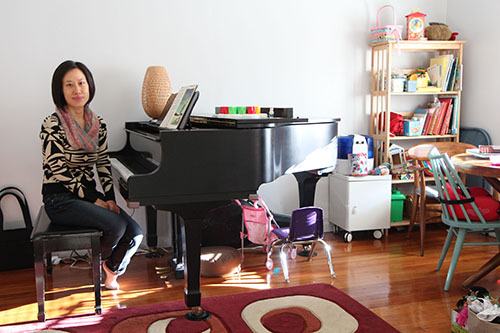 Photo by Nancy A. Ruhling
She had her first lesson at 5.

"It may be small in size, but it allows the musical imagination to be big," she says.

Phyllis is quick to point out that she isn't the first musician or composer to discover the tuneful tones of the tiny tykes. 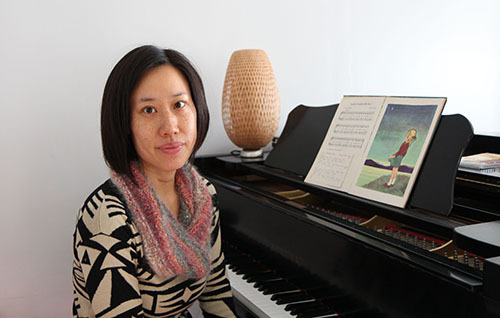 Photo by Nancy A. Ruhling
Phyllis has three degrees in music.


It was John Cage, she reminds, who turned it into a concert instrument in 1948 with his Suite for Toy Piano.

Indeed, her UnCaged Toy Piano Festival, which will be tuning up in Astoria Nov. 27 through Dec. 5, was inspired, in part, by that seminal work.

When Phyllis started taking piano lessons, she was 5, an age most appropriate for a toy piano. Except she hit her high and low notes on a full-fledged instrument.

She spent her childhood in Blacksburg, Virginia practicing the scales; that's where her parents settled when they left Taiwan. Piano lessons were her mother's idea. 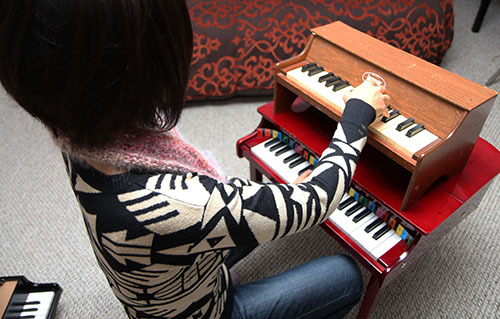 Photo by Nancy A. Ruhling
A toy piano for each hand.

"I was pretty neutral about it," says Phyllis. "In the beginning, it was more of a tactile, not musical experience for me."

By the time she was 12, she had fallen in love with classical music. She played out her passion at Oberlin College, then Northwestern and Indiana Universities, earning bachelor's, master's and doctorate degrees in music.

"Musically, I was just treading water," she says. 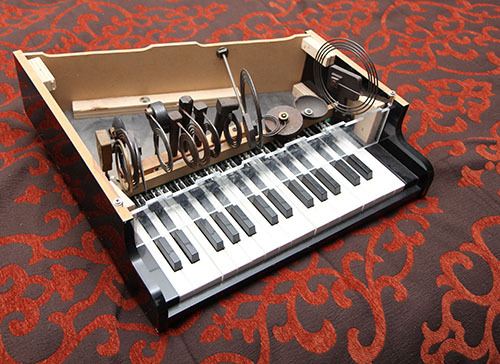 Photo by Nancy A. Ruhling
A homemade toy piano whose sound comes from clock coils.

While she was trying to figure out what to do with her career and her life, her hours upon hours of practicing caught up with her: She developed tendonitis.

"It hurt to play the piano," she says. "I had a toy piano, and I started playing on it. The keys are lightweight; they didn't hurt my hands. And it felt fresh and new and fun."

By the time her professional career took her to New York City in 2007, the toy piano was a key part of her act.

"It inspired me to compose music, something I had never done before," she says. "Now, a lot of people are asking me to write music for the toy piano." 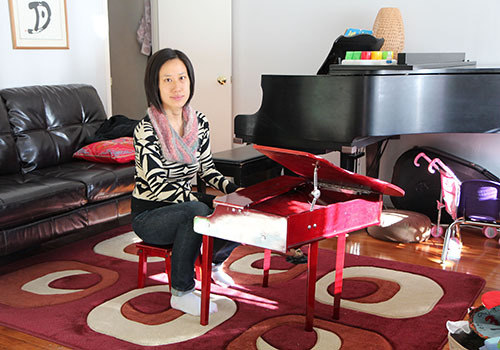 The pee-wee Schoenhut Phyllis was playing is one of two octaves of toy pianos, including an 1872 Bliss and a homemade one that uses vibrating clock coils to produce sounds, in her collection.

She keeps the toy pianos in the basement, which is where she'd like to put the baby grand. It takes up most of the living room, standing in for a coat rack and toy chest.

As she's clearing it off, her husband, Rob Dietz, comes home with their two children in tow. 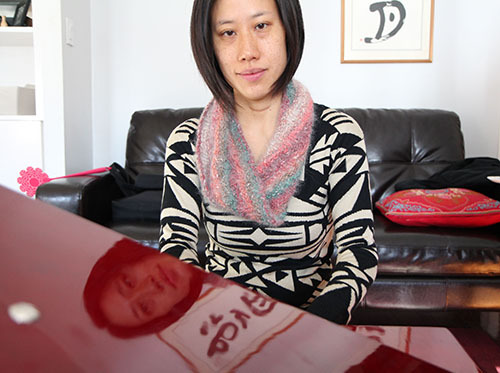 Photo by Nancy A. Ruhling
Rehearsing for the toy piano festival.

Phyllis is sitting at the baby grand when Zoe crawls into her lap and slap-smashes the keys with her open hand.

"She can do much better than that," Phyllis says. 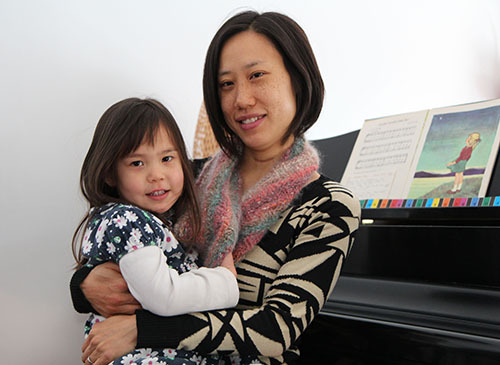 Photo by Nancy A. Ruhling
Zoe hasn't taken to the toy piano -- yet.

Twinkle, Twinkle Little Star is on the music rack; it's in an old book Rob's mother gave them. Phyllis says she and Zoe sing it together.

"I started playing the toy piano out of curiosity and a sense of discovery," she says. "I still have no idea where it's going to take me."

And that, she says as Zoe dances out of the room, is the real joy of music.