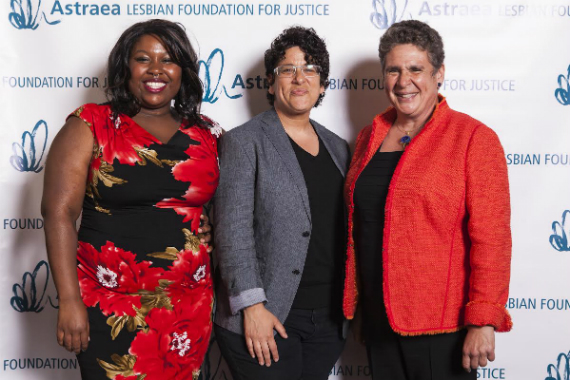 The evening of May 12th at the South End's wildly popular Bohemian hip spot "The Beehive" was a night to remember.

"It was a wonderful night, with fabulous people celebrating the good works of honorees and Astraea. It's important to pause sometimes and highlight how the hard work of remarkable women have advanced our community. It's an honor to spend an evening with so many committed warriors for the good," Arline Isaacson, co-chair of Massachusetts Gay and Lesbian Political Caucus shared with me.

The Astraea Lesbian Foundation for Justice was in Boston to celebrate the life and legacy of the late Jean Hardisty (Founder & President Emerita of the progressive think tank "Political Research Associates), and to honor our Boston-area LGBTQI activists Daunasia Yancey (Co­-organizer of Black Lives Matter, Boston) and Elyse D. Cherry (CEO of Boston Community Capital) at their 2015 "Fueling the Frontlines Awards" it hosted.

With Boston being the first in the country to hold a feminist conference in 1969, it was, in its heyday, an intellectual base with activist circles of feminism. In acknowledging both Boston's renowned feminist activist history and expressing excitement that Astraea this year landed in Beantown, J. Bob Alotta, Executive Director of Astraea, told to me, "Boston has always been an activist town so Astraea found true support and solidarity here. Each of the honorees is emblematic of the values Astraea holds dear. It was an honor to share the stage and raise a glass with and for these powerful leaders."

For nearly four decades now the Astraea Lesbian Foundation for Justice continues to empower a multi- gendered, racial and identified international network of talented grassroots LGBTQI leaders and activists working within their communities. Because Astraea's network expands across the globe it has advanced--in remarkable ways that too often go unnoticed, unreported and underfunded--racial, social, gender and economic justice for women, LGBTQI people of color, and youth. And to date, Astraea is the only global philanthropic organization working exclusively to advance LGBTQI human rights.

Astraea doesn't shy away from the tough and troubling spot across the globe. "Doing the righteous work under the most daring circumstances, " Alotta told the audience at the "Fueling the Frontlines Awards" event. For example, Astraea has worked in Russia and continues to work indefatigably in religiously conservative African and Caribbean countries where LGBTQ activists constantly walk in fear, have been singled out, and arrested because homosexuality and same-gender consensual activity are viewed as an anathema to a black identity, cultural and family values.

Astraea's "Fueling the Frontlines Awards" celebrate local and LGBTQI activists who, too, don't shy away from the tough and troubling spot across in Greater Boston and the nation.

Daunasia Yancey, as a revered black feminist femme lesbian, is heralded as "The new face of Boston's civil rights movement" by Boston magazine, and is one of this year's awardees. I personally cannot applaud her enough!

Yancey's activism in the "Black Lives Matter" movement is an international and intersectional approach, signaling a new generation, toward black liberation and justice, which includes LGBTQI participation that the 1960s Black Civil Rights movement both vociferously and visibly excluded.

"Yancey has been an activist since she was 13 years old, when she fought to found a gay-straight alliance at her Newton middle school. She grew up in the post-Ellen era; gay marriage was sanctioned by law by the time she was in high school. Her political training came through local LGBT youth organizations, not from clergy fired in the kiln of the civil rights movement or seared by Boston's busing crisis. She is heir to a protest culture that owes as much to feminism, ACT UP, and "Silence = Death" as to Martin Luther King Jr.," Boston magazine stated.

As another recipient of the "Fueling the Frontlines Awards," my Wellesley sister, Elyse D Cherry, has proudly lived up to the school's saying: "Women who will make a difference in the world."

In refuting many housing specialists declaring Massachusetts foreclosure crisis over Cherry told the Boston Globe in 2013, "If you live in Newton or Weston or one of the other middle class or upper middle class suburbs, your housing value is probably back up. If you are located in an urban area, like Roxbury, Dorchester, or Lynn, foreclosures are still happening and your housing prices are not up. If fact, you might still be down as much as much as 40 or 50 percent."

Jean Hardisty was honored posthumously. Hardisty died in March of this year and her widow, Peggy Barrett, accepted the award on her behalf.

Hardisty was one of the greatest minds I encountered here in Boston. Hardisty was the Founder and President Emerita of Political Research Associates (PRA), is a Boston-based research center that analyzes right wing, authoritarian, and anti-democratic trends and publishes educational materials for the general public.

A political scientist with a Ph.D. from Northwestern University, she left academia after eight years of teaching and researching conservative political thought to establish PRA in response to the emergence of the New Right in 1981.

Hardisty was a widely published author and had been an activist for social justice issues, especially women's rights and civil rights, for over thirty years. Her book, Mobilizing Resentment: Conservative Resurgence from the John Birch Society to the Promise Keepers, both informed and shaped my activism.

For Gay Pride month in June 2011 I interviewed Hardisty and asked her, what motivates you to do what you do?

She shared the following:
"Because I live in the Boston area, people often ask me why I'm involved in the South. I answer that I spent my formative teenage years living with my parents on a farm in Maryland, and that experience shaped me culturally. But all you have to do is show the slightest interest in hearing more and I'll tell you the political reasons I feel the South is a crucially important focus of progressive work.
The most widely shared view of the South emphasizes its history of racial oppression and anti-union "right-to-work" politics. According to this analysis it's the part of the country where you can pay workers less, extract coal, lumber and minerals without bothersome opposition, and count on Republican voters to support ultra-conservative positions on social issues such as abortion and gay unions."

Astraea raised approximately $87,000 that evening. It was a new "Fueling the Frontlines Awards" record as it moves closer to the Foundation's 3-year $20 million campaign to provide needed support and resources to grassroots LGBTQI activists and organizations across the globe.

And it's still not too late to contribute no matter where you live on the globe.