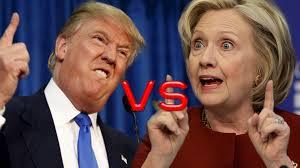 Today is the November 8, 2016 when all Americans go to the polls to vote for the next President of the United States. This has been a highly contentious race that has polarized our country. Polls are showing this to be a tight race, but as an astrologer I have been predicting since May 15 of this year--that Hillary Clinton would become our next President. Here's why.

Astrologers have many ways of looking at a candidate's birth chart and forecasting the likelihood that a candidate will win or lose an election. To predict the outcome of this presidential race, I focused on the transits affecting each candidate.

Transits are astrological events that are produced when a moving planet in the sky forms a relationship with a planet in a person's birth chart. The interaction of those two planets produces an event that causes something special to happen in a person's life.

These transits are the catalyst or change agents that affect a person, their relationships, activities and the major events that occur in their life. Their effects can be positive, beneficial, negative, upsetting, difficult, disappointing and even depressing. As an astrologer, I have interpreted the transits of each presidential candidate and determined who will be the next President of the United States.

My personal political views have never altered my objectivity in interpreting the transits (and progressions) for each candidate as their astrology dictated. The stars don't lie even if we astrologers are prone to our own mis-interpretations.

Let me re-state for the record why, astrologically, I believe Donald Trump will lose and why Hillary Clinton will win the presidential election today. I'm going to keep my astrological reasons simple and summarize the astrological aspects that lead me to my conclusion.

1. Uranus squares his Venus (ruling his 3rd & 10th Houses). This aspect has been affecting him since July, August, September and October resulting in upsetting communications and a sudden reversal of popularity. It would also help explain why he makes many unexpected and shocking statements.

2. Uranus trines his Moon during Election Day and all the way into March, 2017 (with the Moon ruling the public and Trump's 11th House, which is the house of television). I believe Trump knows he's going to lose the election. That's why he's making all kinds of excuses about the "election being rigged." His Uranus/Moon trine is about him starting his own TV network show to take advantage of the movement he's created. He may put together a TV network/show with his pal, Roger Ailes, former CEO of Fox News. This would be his way of continuing to maintain his influence as well as making $$$ millions off of followers who love him and would support his TV show.

PREDICTION: After the election is over--look for TRUMP to star in his own TV Show and/or start a TV network and make millions.

In addition, this transit is the only positive astrology Trump has at the time of the election. I believe it is about him being liberated from the burdens of a campaign and the daily upsets from the public/media. It will give a chance to breath a sigh of relief from being a "loser." He may look forward to the excitement of leading his 50 million followers in support of his new TV enterprise.

3. Saturn opposes his Uranus + Saturn conjuncts his Moon in December and January, which suggests that he is fighting in the public, depressed and having problems with women. (Note: he has pending litigation and trials that he will face after the election).

4. Saturn opposes his Sun. In January--around Inauguration day. He will feel discouraged and depressed, probably because he is not taking the oath of office.

5. Pluto squares his Jupiter. In December and January, this transit indicates that he will be facing enemies who will attack him as well as more lawsuits for his past wrong-doing.

There is so much positive going on in Hillary's chart around November 8th Election Day, that I'll just summarize the aspects happening at that time.

1. Saturn trines her Mars, which indicates that she's working hard in preparation of assuming the responsibilities she's always wanted--being President of the United States.

2. Jupiter conjuncts her Neptune, which indicates she has the opportunity to fulfill her ideals and dreams as she moves into a new residence. (Note: see a more complete interpretation of this aspect below.)

3. Saturn trines her Pluto, which indicates that she has made her ambitions a reality.

4. Jupiter sextiles her Mars, which indicates the good luck of finally fulfillihg her desires.

5. Uranus trines her Saturn, which indicates an exciting opportunity to bring into reality all that she has worked for. She has a chance to revolutionize and re-build the country as the President.

6. Saturn squares her Moon. There is one negative transit that will likely burden Hillary Clinton's Presidency. The Moon rules the public and a person's personal and domestic life. In January, this transit is happening around Inauguration Day, which could indicate that she is depressed about restrictions she faces from Republican opposition who are either contesting her election or talking about indicting or impeaching her. It's also possible this transit is indicative of a personal or domestic problem in her life. (E.G. a health probmem for her or her husband, Bill Clinton)

The Clue: Where Will Hillary Live?

To predict who will win the Presidency, it is very interesting to look at the 4th House of each candidate's birth chart because this house rules one's home or residence. If either becomes President, it is likely that their birth chart would show them making a move to a new residence. As I look at the transits affecting Trump's 4th House, I see no indication of him moving anywhere.

But with Hillary's 4th House being ruled by Neptune, I see that she has a very positive, transiting Jupiter conjunct Neptune happening right around election day. This transit tells me that this is a time in her life when her ideals are aroused and she will have the opportunity to fulfill her most deep-seated dreams. She will be concerned with transforming the social order and helping those in need. It is a time when she will have an opportunity that inspires her

Based on looking at each candidate's astrology, I predict that Hillary Clinton will become the 45th President of the United States.

Whether you voted for Hillary or Trump, if you want to find out about how your transits may be bringing changes into your life, go to the Free Transit Calculator and enter your birth date.

And, if you're curious to learn what your Horoscope says will be happening this year in such areas as your love relationships, and marriage prospects, as well as career, investments and health: Order your customized Report: Your Horoscope & Future in 2016-17.

If you're interested in your own natal chart, go to the Free Horoscope Calculator and enter your birth date. If you want to learn about your unique personality, strengths, weaknesses and talents you were born with, order your: Personal Horoscope Report. It includes a copy of your birth chart.

If you want a Personal Daily Horoscope for your phone , click the link.

Larry Schwimmer is known as "the down-to-earth Astrologer who uses your Horoscope to solve your problems and tell your future!" He is an astrologer in private practice. For a personal consultation, contact him at: Larry@astrodecision.com or go to www.astrodecision.com

Larry Schwimmer is president of Astrodecision.com, a San Francisco-based consulting company. The firm uses planetary cycles analysis to counsel individual and corporate clients on picking the "best dates" to make successful decisions of all types: personal, marketing, financial, and political. Schwimmer is an internationally known business consultant, life coach and astrologer (with a Fortune 500 M&A background). Visit his website: www.Astrodecision.com