Cady Coleman had just finished watching Sandra Bullock in the "The Blind Side" when the actress reached out to her for advice.

Coleman, a self-described fan, had never met or spoken to Bullock before and so the contact in the spring of 2011 came out of the blue, or more appropriately, the blackness of outer space.

A veteran NASA astronaut, Coleman was about two-thirds of her way through a 5-month stay aboard the International Space Station at the time. Bullock, meanwhile, was set to portray an astronaut in director Alfonso Cuarón's movie, "Gravity" (opening in theaters on Oct. 4). [See Photos from 'Gravity,' a Space Thriller]

In the highly-anticipated film, Bullock and co-star George Clooney are astronauts on a routine spacewalk when they are violently separated from their space shuttle. Bullock's performance as "Dr. Ryan Stone" needed to be believable if "Gravity" was to convey to audiences the experience of being stranded in space.

But it wasn't Cuarón or Warner Brothers Pictures or even NASA that brought the real and on-screen space travelers in touch. Instead, it was a chance meeting between their family members.

"It was through my younger brother who's in the innovative wine packaging business," Coleman told collectSPACE.com in her first interview about advising Bullock for the film. "He met Sandra Bullock's sister, who is a chef."

The siblings of the astronaut and actress spoke and Bullock's sister asked if Coleman would be amenable to answering some questions from space.

As it just so happened, Coleman was watching Bullock's Academy Award-winning performance in "The Blind Side" when the two first connected.

"It was really ironic that I'd be watching this movie while running on the [space station's] treadmill and the next day receive an email with her contact information," Coleman said.

Aligning the star with space

Coleman and Bullock exchanged emails but they agreed it would be nicer if they could talk by phone. That required a bit of space-to-ground coordination.

"The big problem is you can't really call us on the station, unless it is an emergency or official," Coleman explained. "But we can call you because we have an internet protocol phone."

"So the only way we could really talk was for her to share her phone number and a list of times when we could talk," Coleman said.

It was Bullock's first lesson in what it is like to live in space.

"She wanted to know about what it is like to physically live up there and physically move around. 'What would you do with your hands? With your feet? What would be a natural position to work?" How often do you see your crewmates? Where do you meet each other?' It was those kinds of things," Coleman recalled. 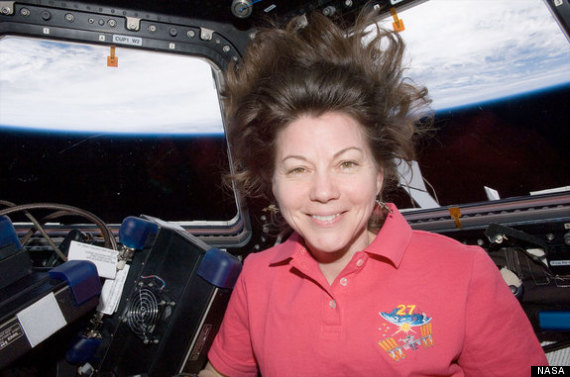 NASA astronaut Cady Coleman is seen inside the Cupola of the International Space Station. Earth's horizon and the blackness of space are visible through the windows.

Bullock, who didn't share much about the movie she was making ("I didn't want to push her to share that," Coleman said), expressed a general interest about life in space.

"We did not share any secrets, personal or professional. I don't know if I have any," Coleman remarked. "It was just a genuine exchange of information. She asked really good questions. I came out of it thinking 'I am really glad that this woman is making a movie about what it is like to live in space.'"

But it wasn't just helping to make a movie that Coleman relished from her conversation with Bullock.

"We talked on the phone for that one long time, which was certainly a nice morale thing for me," the astronaut told collectSPACE.com. "I'm up there on the station with five guys and to get to talk to somebody who, even instantly on the phone, is so personable, it was like talking to a girlfriend."

Coleman and Bullock were only able to arrange one call but Coleman then followed up with e-mailed audio clips, as she and her crewmates thought of more things to tell the actress.

"I took the questions that Sandra asked me and I brought them to the dinner table," Coleman said. "My crew and I would talk about what we thought about them or what else we would tell her."

"We're working hard up there and the days are really long, so it was pretty neat to have somebody that you've looked up to on the screen from afar to [get in touch]," she said.

The 'Gravity' of the situation

Coleman doesn't know yet how Bullock applied her advice to the performance...

Click here to continue reading at collectSPACE.com about why Coleman believes films such as "Gravity" are important to the future of space exploration.