"No serious astronomer gives any credence to any of these stories ... I think most astronomers would dismiss these. I dismiss them because if aliens had made the great effort to traverse interstellar distances to come here, they wouldn't just meet a few well-known cranks, make a few circles in corn fields and go away again."

Such sweeping statements from well regarded scientists are endlessly frustrating to the UFO researcher. Particularly given that interest in UFOs actually drives some people to study astronomy! Unfortunately the idea that only kooks see UFOs is prevalent.

But because Lord Rees is a scientist, the correct answer is to provide him with scientific data that is directly relevant to his claim. I am aware of only three attempts to scientifically gauge what percentage of astronomers see UFOs. Two show that not only do astronomers see UFOs in America, but many are afraid to report their sightings because they fear professional and public ridicule. The final source indicates that astronomers see UFOs at a dramatically greater rate than the general population. 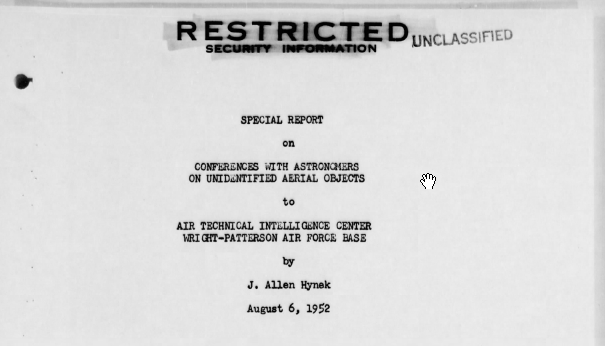 Hynek interviewed some 45 astronomers on their experiences and opinions about UFOs during and following the meeting of the American Astronomical Society that June. Hynek provides some notes on each individual astronomer and their opinions. Here's what some astronomers thought in 1952:

Astronomer Y (no sightings) said, "If I saw one, I wouldn't say anything about it."

Astronomer II (two sightings) "is willing to cooperate but does not wish to have notoriety," Hynek reports.

Astronomer OO: (one sighting) was a new observer at the Harvard Meteor Station in New Mexico. He saw two lights moving in parallel that were too fast for a plane and too slow for a meteor. He had not reported his observation.

Hynek concluded: "Over 40 astronomers were interviewed of which five had made sightings of one sort or another. This is a higher percentage than among the populace at large. Perhaps this is to be expected, since astronomers do, after all, watch the skies."

The next data point comes from 1977. Dr. Peter Sturrock made a questionnaire about UFO attitudes and experiences. Again the target was the members of the American Astronomical Society. The paper was eventually printed in 1994 in the Journal of Scientific Exploration, a peer-reviewed but decidedly non-mainstream publication.

Sturrock received 1,356 responses from 2,611 questionnaires. Sixty-two astronomers responded that they had observed something they could not explain which could be relevant to the UFO phenomenon. Eighteen of those witnesses said they had previously reported their sightings, and Sturrock notes that a 30% reporting rate is greater than what is assumed for the average population. Section 3.2 of the paper titled "Comparison of Witnesses and Non-Witnesses" contains a table showing that UFO witnessees were actually more likely to be night sky observers (professional or amateur) while non-witnesses are more likely to not even be observing the skies at all!

Sturrock also includes commentary from the astronomers, and again a sample is illuminating:

C1. "I object to being quizzed about this obvious nonsense. Unidentified = unobserved or factually unrecorded: modern mythology. Too much respectability given to it."

C1O. "l find it tough to make a living as an astronomer these days. It would be professionally suicidal to devote significant time to UFOs. However, I am quite interested in your survey."

C16. "Menzel and Condon have made further investigation unnecessary unless some really new phenomena are reported ... There is no pattern to UFO reports except that they predominantly come from unreliable observers."

At the 1969 AAAS UFO debate organized by Carl Sagan, Dr. Franklin Roach delivered a paper on "Astronomers' Views on UFOs." He focuses on the lack of publicized UFO reports from major astronomical research programs that constantly monitor vast swaths of the sky. He offered a quote from the famous astronomer Gerard Kuiper:

"I should correct a statement that has been made that scientists have shied away from UFO reports for fear of ridicule ... A scientist chooses his field of inquiry because he believes it holds real promise. If later his choice proves wrong, he will feel very badly and try to sharpen his criteria before he sets out again. Thus, if society finds that most scientists have not been attracted to the UFO problem, the explanation must be that they have not been impressed with the UFO reports."

As the comments from the above surveys show, Kuiper was idealizing the behavior of younger scientists. Lacking his prestige and tenure, they were less willing to suffer mockery from their peers.

The final data point comes from the Soviet Union. "Observations of Anomalous Atmospheric Phenomena in the USSR: Statistical Analysis" is a report by L.M. Gindilis, D.A. Men'Kov, and I.G. Petrovkaya. It was published by the Soviet Academy of Sciences in 1979 and translated into English by NASA as Technical Memorandum no. 75665 in 1980 and later distributed by CUFOS. It is a statistical analysis of over 200 raw UFO reports in the Soviet Union. Three quarters of the reports come from their massive wave of UFO reports in 1967.

Section 3, "Observers and Witnesses of Observations," contains some very interesting data. They note that "contrary to the widespread fallacy, there is a highly significant percentage of astronomers among the observers." By comparing the number of UFO observers from a given occupation with census data, the authors arrive at a "Activity Coefficient." A higher coefficient indicates a group is reporting more UFOs than expected by population.

At the time, approximately .002% of Soviets over the age of nine were astronomers. Yet they accounted for 10 reports in the Soviet dataset. This yields an activity coefficient of 7500 [Note: NASA's translation reads 7000]. Undergraduates had a coefficient of 3, maintenance workers .9 and Students .02. The Soviet numbers are clear: astronomers report UFOs at astronomical rates. 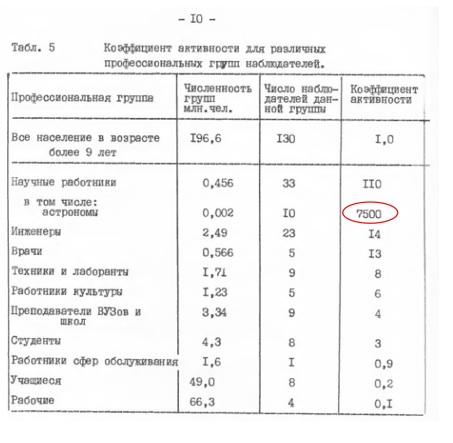 Astronomers see UFOs. Unless we think they are kooks simply because they saw a UFO, the data shows that Lord Rees is incorrect. In the United States, astronomers who observe UFOs on their instruments fear ridicule from other scientists and the press. Despite the aura of illegitimacy around UFOs, the data indicates that astronomers even report UFOs at noticeably greater rates than laypeople.

Better and more recently survey data is clearly desirable. Hynek's survey was informal, Sturrock's is 35 years old, and the Soviet analysis is done on unvetted reports. Only Sturrock's paper was subject to peer-review. But as we have seen, it takes considerable courage for a scientist to brave "career suicide" and study UFOs despite proclamations that the subject is off-limits.

There is a lot of hard work that needs to be done if science hopes to understand the UFO phenomenon. It would be particularly useful to adopt the Soviet activity coefficient and apply it to other databases. Hopefully Lord Rees hasn't scared too many people away from applying the scientific method to UFO reports.