ASUS is a Taiwanese company that hit it big in the United States. It had been mostly known for computer parts, and in 2007 decided to build computers. The brand was recommended by a friend, so I bought a computer/LCD monitor package at Best Buy in February 2010. 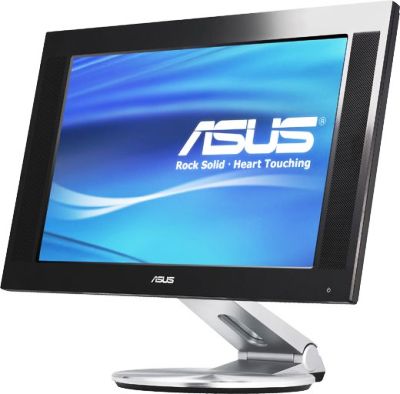 The computer works, but my monitor went black on November 6 and, though still under warranty, I've learned their support system is a joke. Look, every manufactured item might go bonkers, but customer service is key to why a company prospers over the long haul. Having said that, and judging from my experience and apparently many others who've documented theirs, one can only wonder why word hasn't spread further about how horribly ASUS treats its customers.

I've never had a monitor last less than five or six years, which is why I was surprised when my ASUS LCD began flickering upon start-up and went completely dark. I quickly verified the problem with Julio Sagastume, Best Buy Geek Squad's supervisor in West Hollywood, who told me the problem was the backlight. However, even though the monitor was still under warranty, the manufacturer didn't permit the Geek Squad to fix it. I had to deal with ASUS Customer Service.

This was my first instance dealing with a company that didn't have warranty shops in large cities. In years past, if I had a TV, fax machine or VCR/DVD go on the fritz, I could easily find service centers in my area specializing in major manufacturer goods. I'd take the item in with the sales receipt, they did the work and then billed the manufacturer.

Not so, with ASUS. First, although they have a toll-free number for notebooks, it's necessary to call directly to their Indiana support center to get warranty repair for monitors. Even that presents difficulties, because after dealing with recorded instructions invariably someone answers to say no one's available and they demand your number to have someone call back. In the several times I did so, no one ever has.

Occasionally, I'd interrupt an ASUS clerk and quickly explain my problem. In most instances, recently by Sonny, it was suggested the problem was my computer interface. When I asked if this were so why was my old big tube MAG Innovision monitor working fine with my ASUS computer, and why did the ASUS monitor not work with Best Buy's hardware, Sonny hung up.

When I called back I got a friendlier clerk who told me, wrongly, my monitor was covered for three years, even though the brochure which accompanied the machine said it was for one year. She also assured me I would be sent a postage paid mailer to ship the monitor to their Fontana, California facility and gave me an "RMA" number to establish my record.

When I called back twice, I learned it was my responsibility to pay for the shipping and they would send prepaid shipping only if the repaired monitor didn't work. Plus, the warranty was indeed only for one year, because monitors purchased at Best Buy (as opposed to ASUS directly) were insured for the lower period. It was never explained why.

After buying a box and paying for shipping on November 9, the cost close to $20, I followed the repair status on the ASUS website, saw when it was received and being repaired and received a notice it would be returned two weeks from the time it was sent.

The equipment arrived on schedule and, to my dismay, it was a refurbished machine -- more about that later -- and after connecting it discovered it, too, had a backlight problem and would not function.

I was furious and immediately called the Tech Support line and got another rude guy who gave me the company line that the fault was in my hardware. Finally, after getting the corporate number in Fremont, I got Yvonne, a helpful switchboard operator, and after telling her my story she contacted a supervisor in Indiana, who promptly called me back.

Angel was understanding and immediately established a new "RMA" number for returning the package and provided me with a prepaid Fedex number, though he told me if the repaired monitor still didn't work it would be my responsibility to return it. When I protested, he simply said something to the effect that the company would go broke if it kept paying for these services -- even though all these returns were due to ASUS' equipment!

When asked why they'd sent me a refurbished monitor, he said the service center didn't have the part and wanted me to get a monitor sooner. I was concerned, because my original monitor had, at max, been used 1,500 hours (out of 50,000 to 60,000 which most websites indicated was the norm) and, for all I knew, the "refurbished" monitor might have been used far more. Angel said he would see if my monitor was still at the service center and would request that it be repaired and sent back to me.

I shipped the second monitor on November 26 and Fedex tracking told me it was received November 29. However, this time ASUS' website had no information about my computer. When I called the Indiana center on December 2, I was put on hold and no one answered. I finally got Brent, a Tier 2 Level employee, who looked at my record and confirmed (after I gave him the Fedex tracking number) it had been received but hadn't been scanned into ASUS' system, indicating the box hadn't even been opened three days after arrival.

Brent told me he would email the Fontana office -- why he didn't call escapes me -- and would get back to me that night or no later than the next day. To date, he has not called.

December 3, I called the corporate office and again spoke to Yvonne. She'd previously told me if I went through proper channels and got nowhere I could speak to someone at headquarters customer service. She put me through but only to voicemail. No one ever got back.

On December 7 I called the corporate office and couldn't even get the switchboard operator. I then called the Indiana service center and got Garen, who told me my monitor was logged in at the repair department as of December 3 -- four days after shipping had received it! He passed me to supervisor Angel, with whom I'd spoken two weeks ago, and he admitted he had no way of contacting the Fontana service center. When asked what purpose it then served dealing with ASUS' official tech support number, Angel said testily "I've just told you I have no way of contacting them. ASUS is not going to change its way of doing things just to satisfy you."

Apparently attempting to find someone to troubleshoot incredibly shoddy customer service is beyond ASUS' business plan. Or maybe that is their modus operandi, hoping we just go away. Nonetheless, I asked to speak to Angel's supervisor, Maurice, who, of course, had gone for the day.

I then called corporate again and left a message for the missing Yvonne to have someone get back to me. By the end of business, you guessed it, nobody had.

Now whether or not I ever receive a working monitor, I have been put through the ringer by a horrid so-called support system for over a month. A "help center" apparently carped about by legions of ASUS consumers for a number of years. After Googling ASUS customer support, I've read terrible stories, some going back to 2008 and mirroring the runarounds I've endured. Here's what some of them said.

Indeed, there was another link to a former ASUS support guy, who detailed how the company operates, and it was exactly what I'd experienced.

So, the big question is how does ASUS continue to get customers when its equipment clearly is far from perfection and it doesn't stand behind its merchandise in an adequate manner? Why hasn't word spread through cyberspace on Facebook, YouTube, Twitter and Google? Why isn't customer service given more credence and investigated by newspapers and magazines and by Anderson Cooper on CNN, with reports by Brian Williams on NBC, Katie Couric on CBS or Diane Sawyer on ABC?

I will never buy another ASUS product again. I am fearful about my computer and hope it lasts until February, after which time another year's warranty is covered by my American Express card and I can get it repaired at a competent facility.

UPDATE December 14, 2010! Nudging gets results. Got a call last week from Trinity at corporate customer service in Northern California and she sent me a brand new monitor, which arrived today. So far it works fine, but I shouldn't have had to go through such an ordeal and wait almost six weeks for a functioning replacement. Hopefully, ASUS will hire more folks like Trinity and dump most of their staff at their generally worthless "customer service" center in Indiana.