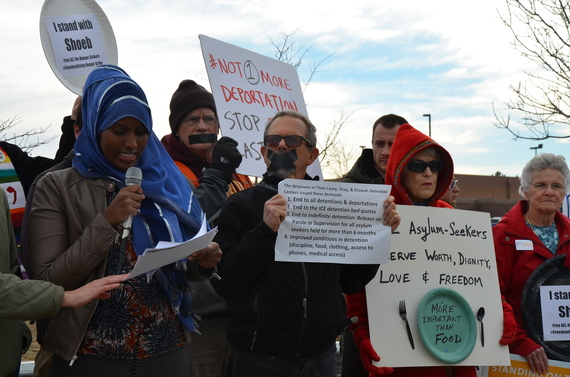 Like most Coloradans, I've spent this holiday season enjoying time with my family, feasting on delicious food, and being grateful for the relative abundance and safety that surround me in this country. I was shaken out of my holiday bliss when I received a call from a concerned constituent about a group of seventeen aspiring Americans being detained at a for-profit prison, GEO, located in Aurora, CO, just outside of my district.

They have been deprived of their families, their communities, and most importantly, their freedom. They have now given up food, initiating a hunger strike to bring light to the untenable situation they face.

They fled their home countries of Bangladesh, Pakistan and India to escape political persecution, torture and probable death. Despite following the proper security and immigration procedures to seek asylum, these men have been held at the detention facility for 14 months, with no road to freedom in sight.

These liberty seekers and their attorneys started asking questions about their cases. When they didn't receive legitimate reasons for why they will not be released, they decided to initiate a "freedom giving" hunger strike. I requested a meeting with those on strike to learn more about their cases, and to better understand what was occurring here in our own backyard.

After a week of waiting I was permitted to have a phone conversation with two who fled from Bangladesh. For the sake of protecting their families, I will refer to them as S. and A. They reported to me all of the asylum seekers on hunger strike are held in solitary confinement, and report their sleep is consistently interrupted. S. and A. report the solitary confinement cells alternate between very hot and very cold. They also report hunger strikers are being threatened with forced feedings.

They are not alone. Close to 150 asylum seekers at 6 other facilities around the country also went on hunger strike and report the same conditions.

The United States of America was founded on an idea - that all men and women are created equal. We hold these truths to be self-evident that all people have rights, no matter what they look like or where they came from or who they worship. How we treat new immigrants, refugees, and those seeking asylum reflects our commitment to the values that define us as Americans.

Our founding fathers also rejected the idea of indefinite detention without a trial. As I spoke with them, S. and A. expressed deep admiration for the human rights policies of the United States. They are asking for a fundamental human right, the opportunity to be free. Why are they being detained more than a year after their arrival?

S. said to me, "We came fleeing for our lives. We chose the U.S. because of the human rights record here. Here you can oppose the government and not risk death, we don't have that luxury in Bangladesh. Now we're starting to ask: where is the protection for our human rights? We don't want to sit here eating up government money. We want to be free and safe, we want to work, to lead normal lives. Our families don't sleep well not knowing what will happen to us next."

This weekend, I didn't sleep well either, because I didn't have any good answers for them. I held my children a little closer and thought of all I would risk to protect them, even death. This isn't what we as a country stand for. We should ensure people escaping violence are not criminalized, subjected to dehumanizing solitary confinement, or indefinitely detained. People around the world still look to the United States to lead, and we should live up to the values we espouse.