This week many are celebrating the unprecedented improvements that the Americans with Disabilities Act (ADA) has brought to the quality of life for millions of people with disabilities in the 25 years since it was signed into law on July 26, 1990. But the work of guaranteeing access to the American dream is far from over. 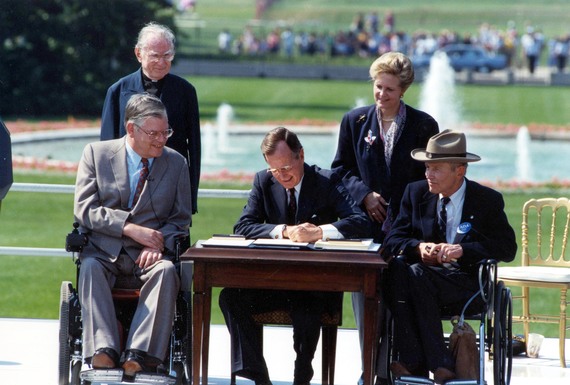 When it was signed into law by President George H.W. Bush amid an overwhelming show of bipartisan support, the ADA promised to enable people with disabilities access to go to school, to church, to the theater and to work. Like the Civil Rights Act on which it was modeled, the ADA viewed the exclusion of people with disabilities from civic life and the workforce as discrimination. Keeping people with disabilities from the mainstream was no longer justifiable. When President Bush signed the ADA, he noted its significance as a civil rights act, meant to "ensure that all should have the opportunity to blend fully and equally into the rich mosaic of the American mainstream." (Click here to watch how President Bush feels about his legacy, 25 years later.)

In most aspects of civic and community life -- education, housing, access to public venues, healthcare, even voting -- the ADA has brought about unprecedented improvements in the quality of life for people with disabilities. Even labor force participation on the part of people with disabilities, which has stood stubbornly at roughly 20% since before the ADA until the present, is showing promising signs, as more employers begin to discover that the resilience, tenacity and problem-solving skills possessed by people with disabilities are strong workplace assets.

Employment is seen by many as the last remaining obstacle to a good quality of life for people with disabilities, and is indeed a critical barrier. But as we know, in today's economy, with its divisions between the haves and the have-nots, getting a job is not in and of itself a path out of poverty.

Equally important to the path toward equality is ensuring the economic security and financial mobility for Americans with disabilities. The first job isn't enough -- it must be paired with meaningful steps toward upward economic mobility.

One of the few pieces of legislation to make it out of last year's Congress was the Achieving a Better Life Experience, or ABLE Act, which lifts the savings limit for those living on Supplemental Security Income (SSI) and Medicaid -- the backbone of our country's public support system for people with disabilities. Before the ABLE Act, people with disabilities were allowed to accumulate no more than $2,000 in savings without triggering a loss in benefits. That effectively trapped beneficiaries in long-term poverty and created disincentives to working longer hours and producing more income. Of course, the implicit assumption is that beneficiaries will never work and can expect no better life than a dependency on public benefits living in poverty.

But access to the American dream should not be denied to people with disabilities any more than access to public accommodations. We need to make sure that people with disabilities are financially literate. That they understand the power of saving money and know how to do it. That they're bankable; they have access to credit; they can save money to buy a home, finance their children's education or just see a path to financial security.

These commonplace privileges to which most Americans aspire, have long been denied to people with disabilities, by public policy and by law. This not only denies their dignity and financial mobility, but the income maintenance programs they're forced to depend on as a replacement, like SSI and Social Security Disability Insurance (SSDI), do not have sufficient funds to keep up with demand.

We know that preventing discrimination is laudable but insufficient to guarantee these fundamental privileges to America's 56 million people with disabilities. Public policies governing the longstanding programs that keep people with disabilities trapped in poverty need to be changed, to incentivize not only earnings, but savings. Banks need incentives to lend. Budgeting and financial literacy must be taught in special education classes. Twenty-five years after the passage of the ADA, Congress took a positive step forward with the ABLE Act that encourages savings without jeopardizing needed public benefits and promotes longer term planning for a better economic future.

Over 120 leaders in government and the disability and asset building communities will convene next week in Washington, D.C. to build a post ADA@25 action-oriented agenda that proposes improved strategies in policy and program design to promote financial capability and economic mobility for youth and working age adults with disabilities. The next generation of individuals with disabilities expects no less than full participation in the economic mainstream.