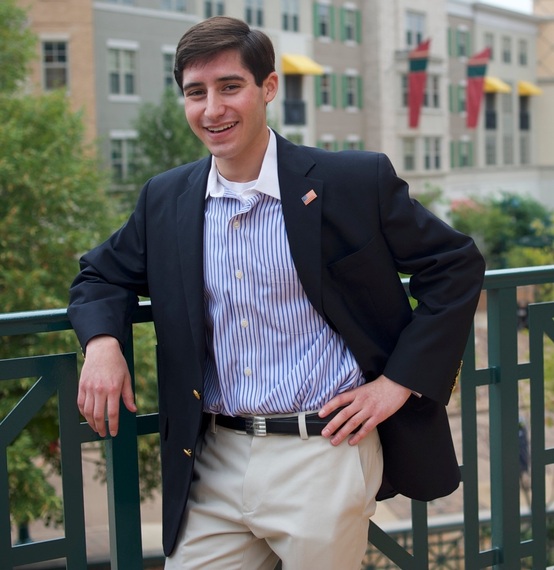 James (Jimmy) Loomis currently serves as the Democratic Committeeman for Clayton Township, a position he was selected to fill in March of 2013, one week after becoming eligible for the position at age 18. He is a full-time undergraduate student at Washington University in St. Louis, double majoring in Political Science and Mandarin Chinese. Since becoming politically active, Loomis has worked on numerous campaigns including Missouri Senator Claire McCaskill's 2012 reelection campaign and most recently served as Deputy Campaign Manager for Steve Stenger's successful campaign for St. Louis County Executive, beating a 10 year primary incumbent with 66 percent of the vote. He hopes to use his Committeeship as a stepping stone to furthering his career in public service. 1. How does it feel to be the youngest elected official in Missouri statewide history and one of the youngest in US history?

Well it's certainly humbling. It's an honor to be able to serve Clayton Township and represent America's politically active youth at the same time.

2. What exactly is your position?

3. How do you balance your academics, social life, and political goals?

It's not easy, that's for sure. It's definitely something you learn as you become more and more involved in different pursuits. The trick is not to focus on one area so much that you begin to neglect the others. I've learned to continually shuffle the priorities of different undertakings in my mind so that I am constantly evaluating and reevaluating what I need to accomplish, how it contributes to reaching my end goal, and how I will go about completing the task at hand.

4. Given that you're so young, do you find that it is difficult to relate to the people you work with? I'd say that is one of the greatest challenges I've had to face so far. Most of my colleagues are at least twice my age, so I've had to learn when to skip some of the pop culture references that would otherwise be misunderstood. The largest hurdle that I have had to overcome, however, has been getting people to take me seriously instead of brushing me aside because of my age. Instead of seeing that as an asset, many people view it as a handicap. The key is to show people that you are just as capable as anyone else of getting a job done and doing it well.

5. Do you actually do anything interesting? To me, everything I do is interesting! To most people, however, my work is boring and uneventful.

6. Is there any partisanship or gridlock at the level you currently work? Because I work exclusively with Democratic partisans, the partisanship is usually kept to a minimum, as ironic as that sounds. This doesn't mean everything is fine and dandy, however. Come election time there is usually a good amount of political infighting, but after Election Day we do a pretty good job of kissing and making up.

7. What are some of the most ridiculous stories that you've gathered over the tenure of your political career? If there's one thing about working in politics, it's that there is always another ridiculous story that comes from my work. Most are humorous, some are inspiring and a few are frightening. Most of my stories are from my time serving as a Senate Page during the Summer of 2012 in Washington, DC. The nature of a Page's duties, mainly accommodating any request a Senator may have on the Senate floor, allows for close relationships and unique interactions between Senators and Pages. One of my favorite stories is when the late Frank Lautenberg of New Jersey once got stuck in a Senate subway cab. I remember him stepping into the car when the doors closed and when the train stopped moving, the Senator frantically pantomimed to Capitol Police to open the doors to let him out, half jokingly and half serious. Eventually the doors opened and the Senator made it to wherever he was going. I guess that story was a lot funnier in person. I have a lot of stories, but most of them are better (and more appropriate) in person.

8. What has been your most meaningful work in politics so far? Due to my relatively short time in politics, my most meaningful experiences have been limited to my interactions with the greater political system as a whole instead of more traditional constituent relationships. I would have to consider my very first encounter with community activism as the most meaningful. It was 2006 and I had watched the film "An Inconvenient Truth." The documentary inspired me to advocate for my municipality to adopt a recycling program. I was successful, and this was the first time that I realized that one person, no matter how big or small, old or young, powerful or ordinary, has the power to make a real difference in everyday life.

9. You are fluent in Mandarin Chinese. How does that tie in with your career goals? I began studying Mandarin Chinese in the 7th grade and have loved learning the language and culture since. It is an inevitable fact that China has become a dominant player on the world stage and will continue to play a transformative role in global affairs in the years to come. With that in mind, I would like to apply my language skills towards service in foreign relations or domestic fiscal policy. Regardless, I see it as important for someone wishing to engage in leadership and public service to have a least some familiarity with cultures and customs different than their own.

10. What do you think is the greatest threat or obstacle facing the American political system today? Call me naive or even call me stupid, but I'm one of those few people who are optimistic about our country's future. I am confident that our brightest days are yet to come. However, I am a pragmatist. We can only advance as a nation if we commit ourselves to confronting and solving some of the most pressing issues of our times, such as combating global climate change, by creating policies which encourage domestic sustainable energy production, reducing the growing national debt by reevaluating America's role in international affairs following the end of the Cold War, and reforming the electoral process through using independent redistricting commissions to draw fair, non-partisan, and proportional congressional districts.

11. As you've developed a career in politics, you've been known to write well-known public servants to solicit their advice on entering the political arena. Do you feel that you are at a point where you can now give advice to others? If so, what advice do you have? If someone were to write to me in search of advice on a political career, I would be too humbled and thrilled not to share with them whatever wisdom I may have. I don't feel that I am at a point in my career where I can counsel others. To do that one needs a certain wisdom that is only ascertained through years of first-hand experience, and I am very much still learning the ropes myself. There is one quote that I try to live my life by: The Great One Wayne Gretzky once said "you miss 100% of the shots you don't take." (He did play for my St. Louis Blues after all!) If I had to share advice, it would be to take that quote to heart: never be petty, always be fearless, and don't be afraid to fight for what you believe in even if that means you are fighting alone.

12. Why do you do what you do? Why would anyone want to go in a field where you have no private life, have no job security, and make less money than someone in the private sector? I am in the field of politics for one simple reason, and that is that I absolutely love being able to "be the change I wish to see in the world", nothing more. I cannot see myself doing anything else. I am one of the lucky few who not only knows what they love to do, but also has the privilege of making that into a lifelong career. I see no better avenue through which to institute meaningful change than doing so within, from the inside-out.

13. So as I'm sure you know, I'm primarily a sports writer and analyst. Will we be seeing you throwing a first-pitch strike one day? (Sheepish chuckle.) I don't know about that, but I will say that I did have an impressive OBP back in my Little League days: .666. Coach always told me to get a low as possible (I'm 5'3") and to "lean into the ball." Had quite a few bruises at the end of the season but I sure as hell got on base!

14. Why do you keep a photo of LBJ on your desk? I keep two famous photos of my political hero on my desk for inspiration, as cheesy as it sounds. The first photo is of LBJ in the Oval Office giving Senator Richard Russell the notorious "Johnson Treatment", whereby he would masterfully employ his talents of persuasion and charm to break the will of whomever he targeted. The second picture is of Johnson performing the "treatment" on Supreme Court Justice Abe Fortas. Both pictures remind me of the zeal, passion, and ambition with which Johnson led his life in public service and the tenacity and fortitude which allowed him to enact historical legislation and policies.

15. Since you're so young, you have a long and great future ahead of you. What are some of your future plans? Congressional run? I'll answer this one in a true politician fashion: at this point I will continue to focus my resources on serving my constituency, and have not ruled in or out any future runs for office. I will make my decision towards the end of my term in 2016. Until then, I'm perfectly happy where I am right now!