My students' faces lit up as we rounded the corner into Times Square. The ManualAires, an auditioned choir from Emmerich Manual High School in Indianapolis, had come to New York City to sing at Carnegie Hall. If the reality had not yet sunk in for these Midwestern high school students, it certainly did now. We were in the Big Apple, in three days we would be performing on one of the most famous stages in the world, and the whole experience was larger than life.

My wife was wise enough to point her iPhone away from the LED billboards and toward the students. The image is one of my favorites from the entire trip: in my students' eyes, I see a whole new world of possibilities opening up before them. 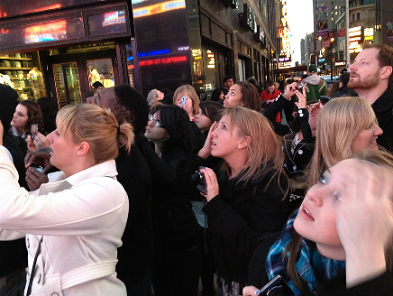 For some, a trip to New York might seem like a better-than-average field trip. But for my students, it was truly life-changing. Where I teach in Indianapolis, more than 90% of the students are eligible for free or reduced lunch. Despite the challenges they face, these are incredible students who at times seem to be stuck in the wrong place, desperately searching for a way out. They know there is something else out there for them, but are just unable to put a finger on what it is. I hoped that this trip would help some of them understand what 'it' might be.

It was hard to believe, standing in Times Square with my students, that we'd actually come this far. A year ago, I received an email from Greg Gilpin, an Indianapolis-based choral composer who would be conducting a concert at Carnegie Hall, inviting our Advanced Choir to perform with him. I'm pretty sure I deleted that email. I had done some homework to see what the estimated cost would be ... $30,000! It seemed out of reach for us. But then I heard from Matt Tully of the Indianapolis Star, asking if he could petition the people of greater Indianapolis to help us get there.

Get us there, they did. Indianapolis showed support, and showed it very strong! Within the span of a month, our total was close to $90,000. We would be able to make the trip.

Before we knew it, the day had arrived and we were in New York. And while the opportunity to sing in Carnegie Hall was certainly extraordinary, so much more was gleaned from the trip.

One afternoon, we stopped at Washington Square Park, in the heart of New York University's campus. One student, in particular, was almost beside herself when she realized it was an option to go to college in New York City. I watched the wheels in her head start turning, as she put the pieces of the puzzle together and began to comprehend the exciting truth that her life could take her out of the only world she had known to one of endless possibilities. It was at that moment that I knew the trip had been a success.

For me, it was most rewarding to see my students experience what is possible outside of their circumstances -- that something they saw or someone they talked to opened their eyes to a world of possibilities for their life they never knew existed. I wanted my students to be exposed to what is possible when they allow themselves to be vulnerable and open to new things. For this trip to be the catalyst for substantial change in the lives of these students was, for me, the most rewarding possible outcome.

When the day finally arrived for us to perform, I had the students circle up backstage to reflect on our time.

As I went around the circle, one at a time the students voiced their thoughts. Some laughing, some trying to hold back tears, others with them already running down their cheeks, they spoke of the choir being their family. I think most of them finally understood what it really meant to have come this far, and to sing in Carnegie Hall. I shared one final thought with the choir before allowing them to dry their eyes and finish preparing to go onstage. I simply expressed to them that I would not rather be in that place, at that moment, with any other group of people. I told them none of them were in that room on accident. I finished by saying that this is only the beginning for them, and Carnegie Hall was a pretty good place to start. After all, it is the greatest stage in the world.

Spencer Lloyd teaches music at Emmerich Manual High School in Indianapolis, where he is the Director of Choral Activities. He is currently a Teach Plus Teaching Policy Fellow. To learn more about the ManualAires' trip to New York, visit themanualaires.tumblr.com.