The exhibition 'Richard Estes: Painting New York City' opened March 10 at the Museum of Arts and Design and is the first solo show by the octogenarian painter in a New York museum. It is enough to claim this artist's place in the Pantheon of American greatest painters. The show includes 24 paintings of urban subjects like glass and chrome storefronts, movie theater marquees, cars and trucks, subways, the Brooklyn Bridge, views from the Staten Island Ferry and idyllic images of Central Park made between 1965 and 2015. In a way, this show is a continuation of last year's big retrospective dedicated to this artist at the the Smithsonian Institute and impeccably co-curated by the artist's lifelong friend, Patterson Sims. 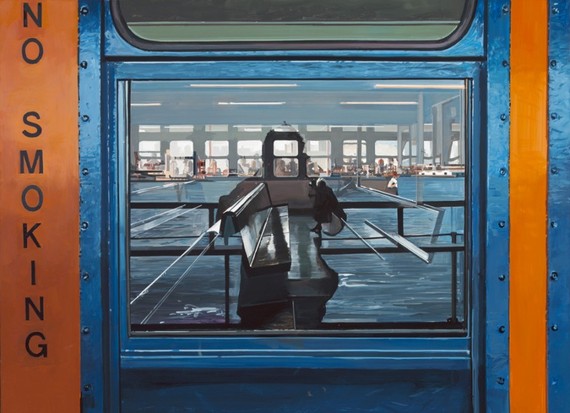 Sims's has followed Estes' development since the sixties and it wouldn't be inaccurate to say that he has dedicated his whole curating career to show that the artist's concerns are far more complex than hyperrealistic copying. In other words, while, at first sight, the viewer might think that Estes' work is all about mimetic accuracy to the extreme that he makes the traces of his authorship (his brushwork style and his own signature, for example) disappear from the painting's surface, his realism emerges as a tool for discussing artistic identity in a transient world. In fact, Estes makes a point of making the viewer look for his signature which is, almost always, hidden amongst the neon signs and reflections of the city. If photography happens in an instant, these 'photography-derived' images require careful attention and slowly reveal themselves in front of the viewer. 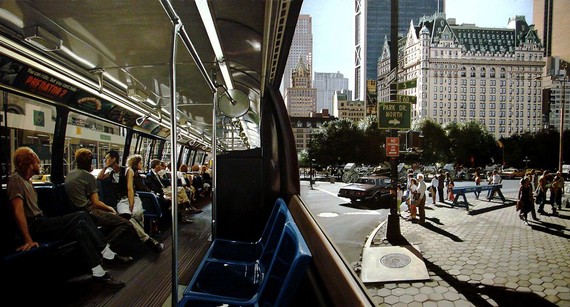 The show starts with 'Self Portrait' (2013) where the artist depicts himself reflected on a window on one of the decks of the Staten Island Ferry. Although one can see his silhouette reflected on the mirror, his facial features are replaced by the reflection of a window. Of course, that is the sort of window that a tourist would use to see what the lens of the artist is showing us as seeing. In the tradition of paintings inside paintings that emerged in the sixteenth century in the form of mirrors in Velazquez or lakes in Nicholas Poussin, Estes' shiny surfaces both metaphorically and optically reflect the real.

In 1968, the artist said: 'A thought about reflection is that what we are looking at something that really isn't there. On the reflective surfaces, the tactile and the visual poetry do not coincide for they overlap. Since all objects reflect, glass and chrome, only more so, they show how we think they are. Thus, the reflection becomes reality.' 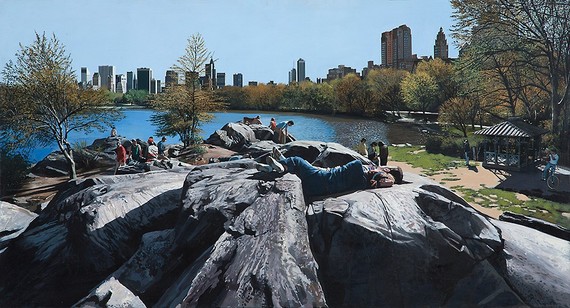 At the centre of his self portraits and urban landscapes, Estes places the tunnel vision that has the artist and the viewer's eye as ends. His paintings are windows into surfaces that seem to fold onto themselves. The place, however, of that who looks is of fundamental importance for he always include the platform from which he is painting. Thus, buses, boats and streets are for him as important as windows and mirrors. Although one might believe that his hyperrealist style is self effacing, the theme of the painting is not only the eye of the viewer but also its viewing point. At that point, self effacement becomes self portraiture and it is in those paradoxes or, even better, ironies that his work is a triumph. 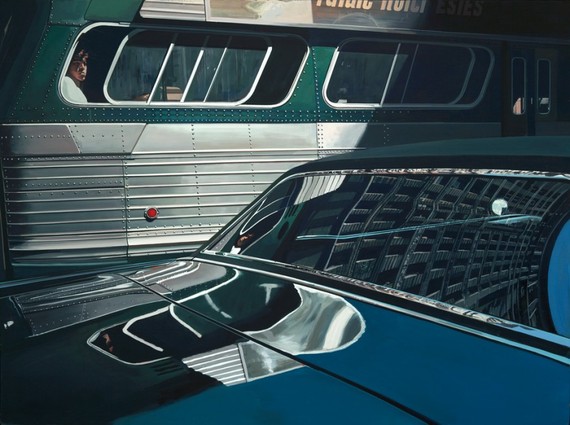 In another of the paintings included in the show, 'The Plaza' (1991), Estes paints the bus from where he is looking at the Central Park while passing The Plaza hotel. However, in order to transform the painting into both a depiction of people looking at the window and a window through which the viewer can look into the city, he must deform that window and make it impossibly long and uninterrupted. These alterations of structure and perspective transform the painting not only into a collage of viewing points, colours and painterly genres but also into a reflection of the cognitive legacy of the visual investigations of Dada and Rauschenberg's collages.

In 'Sunday Afternoon in the Park' (1989), Estes pays homage to a painter that shared his same kind of preoccupations with the opticality of the visual. I am referring to George Seurat's 'La Grande Jatte' which, in this occasion, functions both literally and metaphorically as a reflective surface. I am saying this because not only the city reflects on the Central Park pond but also the painting itself becomes a reflection of allusions both to Stephen Sondheim (in its title) and Seurat (in its theme).

Bus with Reflection of the Flatiron Building (1966-1967) is a painterly tour the force which includes not only a painting inside a painting inside a painting (the young man by the window reflected on the surface of the car inside Estes' painting) but it also creates a mirrored game of pictorial genres for he divides the painting surface into two halves. One including a portrait and the other, an urban landscape. The fact that Allan Stone noticed his genius confirm the fact that that gallery was one of the founding fathers of American art at its best. An amazing show.