"I have marked well the plight of My people... I am mindful of their sufferings." (Exodus 3:7)

For Makay Borrow Shuriye, climate change is not a far-off concern. She and her five children live in Kenya's Nanighi community, in Garissa County, raising camels and other livestock. But the increasing frequency and severity of droughts, a clear consequence of climate change, is taking its toll. Less food is available for the camels as pastures disappear. The animals have become more susceptible to disease, and their migration to areas where food is still available introduces new diseases. She and the other mothers in the community work with the development organization CARE to explore climate change mitigation strategies, but Makay may well become a climate change refugee in the near future, living on the margins of a parched land.

The movement of climate refugees has started and is becoming a major human tragedy. CARE estimates that minimally, 250 million climate refugees will be pushed out of their native places by 2050. And the true figure may be as much as 750 million. This massive human migration will occur because rising sea waters will not only flood low-lying areas and island nations but also contaminate river deltas, the hub of major agricultural areas. Climate change will cause severe flooding in some areas and severe droughts in others.

When you hear Pope Francis draw attention to the suffering of people like Makay, he's exercising what Catholics call "the preferential option for the poor," asking, "How are the poor faring?" within every social issue. It's a question you don't hear asked often enough in the current discussion of climate change--even among some environmental leaders. We can expect this concern for people living in poverty to be a major theme of Pope Francis' forthcoming encyclical on ecology to be released early this summer.

Pope Francis has maintained the Catholic commitment to the "preferential option for the poor," but he's gone deeper, emphasizing solidarity and even fraternity with those excluded from the global economy. Pope Francis has said that we are not just connected to poor and marginalized people--we are family. The Pope has retold the story of Cain and Abel (Genesis 4) to illustrate the human propensity to shirk responsibility for other people. The question "Am I my brother's keeper?" must be asked about climate refugees as they try to find a place to lay their heads.

Pope Francis has repeatedly emphasized the vulnerability of people living in poverty to environmental crises--especially those excluded from the global economy. To Jesus' Last Judgment discourse (Matthew 25), which establishes for Christians that how we treat poor people is essential for salvation ("I was hungry and you gave me food."), the Pope might add, "I was flooded and you found me a new home." But again, it's not a new teaching. As the Catholic Catechism states, "Those who are oppressed by poverty are the object of a preferential love on the part of the Church."

This dimension of church teaching underlies Francis' blistering critique of the current economic order as a greed-driven, "throw-away" system, in which the rich get richer and income inequality continues to expand. The Pope believes how we treat each other (human ecology) affects how we treat God's creation (natural ecology). Makay's poverty is therefore connected to the ill effects of climate change from which she and her community suffer.

The Pope's encyclical, one of the highest forms of church teaching, will now cement these teachings as central to Catholicism and, by extension, will raise the importance and awareness of environmentalism within all faiths. And while these ideas have been well integrated into Jewish and Christian environmentalism over the last 40 to 50 years, the document will advance and emphasize how important environmental justice is in a year when climate change has taken center stage.

OurVoices, the international multi-faith climate campaign, will be facilitating an inter-religious response to the encyclical, sharing the perspectives and reactions of people from a wide range of traditions and circumstances. We will be calling on people of many faiths and spiritualities to publically share their support of Pope Francis in his efforts to create a global solidarity in which all can participate.

This year, Passover and Easter coincide. At the time Jews are sitting down to the first seder, Christians will be observing Good Friday. For Jews the liberation from Egypt is the central story of their tradition. It is a story which is supposed to link present generations to those who traveled from slavery to freedom. Many of the laws in the Torah deal with the need to protect the rights of the poor and powerless and ensure that society's judicial, economic and political systems are guided by tzedek (justice and equity). The rationale for these laws is often because "you were slaves (or strangers) in the land of Egypt." As it is written in the Passover Haggadah, "In every generation one must see oneself as if they had come out of Egypt."

Easter, a time of rebirth, is a time for Christians to try to make a fresh start. Pope Francis encourages contemporary followers of Jesus to stand as family with Makay's family and work for a strong climate treaty. This solidarity will move us beyond the groaning of creation described by Paul in his Letter to the Romans to genuine stewardship, caring for and protecting creation, which is a role assigned to us by God in the Book of Genesis. And will bring about a "new creation."

In modern Jewish social justice ideology, tikkun 'olam (Repairing the World) has become a critical concept in inspiring people to act. It is the hope that the redemption of humanity and Creation can come through the human choices that we all make in our everyday lives. In the last part of the Passover Seder we look towards that ongoing redemptive process with hope and determination.

In this year of action to protect Creation, we must seek liberation from the fossil fuels that enslave millions of people like Makay to a life of wandering amidst poverty. We must resolve to say, "In this generation one must see themselves as climate refugees."

Let us not fail Makay and future generations not yet born.

This is the second in a series of posts on the encyclical by Jeffry Odell Korgen & Rabbi Lawrence Troster who are engaging Catholic and Jewish communities in OurVoices, the international, multi-faith climate campaign. 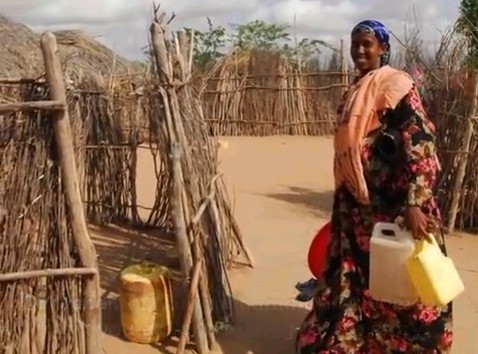 Picture used with permission of CARE