Protecting the water and sacred sites brought people here. The experience of being here is changing lives. 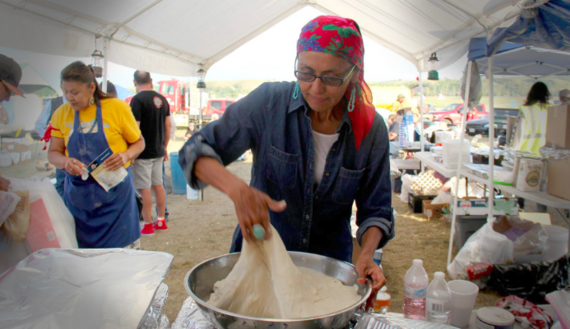 Drive from Bismarck, North Dakota, to the Standing Rock encampment, and the sign that something unusual is happening is abrupt: a checkpoint staffed by the National Guard. Continue south, past rolling grasslands with an occasional farmhouse, until there is nothing but open space. Catch a glimpse of the Missouri River meandering back and forth, and a flock of white pelicans circling overhead.

Miles later, by the side of the road, stands a small encampment--tents, a camp kitchen, a group of people watching the road warily, banners declaring water, not oil, as sacred. Across the road is the bulldozed earth in an area that Standing Rock Sioux consider sacred. This is where the security forces with dogs attacked the people who call themselves water protectors.

The most dramatic moment, though, comes with the approach to the main encampment. Suddenly, just below the road, is a wide field covered in tents, teepees, and trucks. Lining the main entrance is flag after flag, each representing one of the indigenous nations that has offered its support to the Standing Rock Sioux and their fight against the Dakota Access pipeline.

The impact is powerful. So many people have traveled hundreds or thousands of miles to make this pilgrimage. When people first meet, they ask each other where they're from. Some are old friends, but many represent tribes that have been estranged or enemies for generations. Many spoke of the arrival of representatives of the Crow Nation, who have a long history of supporting coal mining and working at odds with other tribes. They too came to support Standing Rock.

The purposefulness here overcomes everything--the determination that this time the damage will be stopped. This time, before the water is poisoned or another sacred site is bulldozed, the protectors will step in.

That sense of purpose pervades the camp. While some plan the next direct action or post on social media, others split wood for fires, sort the river of donations flowing unabated into the camp, or cook for thousands of people in makeshift camp kitchens.

This time, before the water is poisoned or another sacred site is bulldozed, the protectors will step in.

I had arrived with Sweetwater Nannauck and her friend Kim Morera, pulling a horse trailer, and as we set up our tents, a young man on horseback came by to check on us. Later, a small all-terrain vehicle pulled up with jugs of water for the horse and the campers. Others stopped to offer donated kitchen supplies, food, and a garbage pickup. Nannauck set out to find people to complete the banners for the Northwest tribes' "Paddle to Standing Rock," and soon returned with a crew of young people.

Up at the ceremonial grounds by the entrance, hundreds line up for dinner. No money changes hands. The flags whip in the wind. A prayer, then a speech, then a song fills the air.

Life at the water protectors' encampment is much like life was for millions of years of human evolution--close to the earth, near a river, clustered in family and community camps. There's a rightness to these connections and to the feeling that people here will help you when you need it.

Here, with a purpose that threads through generations, work, celebration, and activism are a seamless whole. Young people ride through the camp on horseback among tents and teepees. Are they providing security, learning traditional animal caretaking, or just having fun together? Elders tell stories of Wounded Knee, say prayers, and sing. Are they educating the next generation, building coherence, or guiding the actions? These things are not separate. They are all of a piece, all about rebuilding indigenous ways of life and standing against further destruction.

People come and go. Some depart after a few days or weeks, but their reluctance to leave shows. Others are making plans to live in wood-heated tents and teepees through North Dakota's bitter cold winter.

This is how we should be living, one person at our camp says. We give what we have to give, and take what we need.

Protecting the water and sacred sites brought people here. But the experience of being here is changing lives and creating renewed unity across indigenous nations, and with it a purpose and power and confidence that will not be easily extinguished.

When Showing Up Requires More Than Just a Facebook Post
When we take the time to connect, we make our communities more resilient and compassionate, and maybe we find the courage to defeat racism.

The Big Difference at Standing Rock Is Native Leadership All Around
Dallas Goldtooth, a veteran organizer of the Keystone XL fight, is amazed at the historic support from tribes at Standing Rock--even tribes that rely on resource extraction.