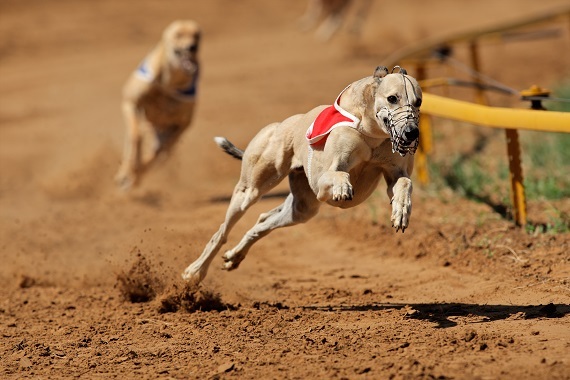 Greyhound at full speed during a race

When professional athletes get injured during a game they are examined immediately. The clock stops and the fans wait with baited breath until the athlete either gets up and rejoins the game or is escorted off the field. Regardless of whether the injury is minor or major, the player is thoroughly examined and treated with care. This may seem like a normal practice and something to be expected, but when it comes to professional racing greyhounds, the empathy, compassion, and care they receive after being injured isn't even close to being in the same ballpark.

Christine Johnson and her husband, Chris Procopis, have dedicated their lives to rescuing, rehabilitating, and re-homing racing greyhounds. The idea to form such an organization began 16 years ago soon after the couple had adopted their first greyhound.

Initially Chris was afraid of dogs. They were living in New York, and had just moved to Westchester County in 1998. Chris knew how much Christine loved dogs, and for their one year anniversary gave her a card that held $1 and written inside were the words "and a dog". The caveat was that the dog couldn't bark, shed, drool, or smell. And since Chris was more of a cat person, he cleverly figured that there was little possibility that a dog would fit such a description.

Being a strong woman with endless perseverance, Christine started her search for a canine companion that fell within her husband's criteria. Not too long afterwards, a friend of Christine's recommended that she try adopting a retired racing greyhound because these dogs have a reputation of being laid back and easy going pets. Christine started her research and coincidentally the following week while on her way to work, came across a lady walking her greyhound. She took this as a sign that a greyhound was the right choice for their family, and went home to put in her adoption application with a greyhound rescue group.

To her surprise she was promptly rejected due to the fact that she and her husband were both working and were away from the house eight hours per day. Refusing to take "No" for an answer, Christine worked quickly to find a solution.

"I'm not one to take no easily. I put flyers all over the condominium complex asking for someone who would come walk the dog while we were at work."

It was an 11-year old boy that answered her advertisement and came to introduce himself. Christine hired him for $7 a day, and afterwards resubmitted her application, which was then accepted.

Christine and Chris were aware of the mentality of racing greyhounds, and how after a career of racing the dogs can maintain a strong desire to chase. It was also important that their dog get along with cats. Taking that into consideration when choosing which greyhound would be best suited to join their family, the agency chose Paris. Being someone who was initially afraid of dogs, to say that Chris was a little surprised when Christine walked in with the 90 lbs. male greyhound, was an understatement. But not being able to go back on his word as Paris met all of his other requirements, he confronted his fears and gave it a try. It was Christine who was utterly shocked and humbled as she watched her husband's fears fade into unconditional love.

Christine said, "Within six weeks my husband, who was afraid of dogs, said to me 'you know, we should get another one', and that's when we got our second one."

As their family grew, so did their desire to learn more about the previous life of their newly adopted greyhounds. Driven by the fact that she had been initially turned down for adoption, but had also been rejected for fostering, Christine knew that she could do better. That's when she started doing the research to form her own organization with the initial members as herself, her husband, and their two dogs.

A little over 16 years and 1,500 dogs ago, Christine and her husband formed Greyhound Rescue and Rehabilitation (GRR) in May 2000. Their mission was to educate people about adopting greyhounds as pets, and explain to them what happens to retired racing greyhounds who are injured, or brood females, which are females who were used for reproduction. Together they started to implement "Meet and Greets".

"We would take our two dogs wherever anyone would allow us to talk about greyhounds. Flea markets, pet stores, trade shows. We would set up a table, on Saturdays and Sundays, and start to educate people in the area about greyhounds as pets." ~ Christine

Christine explained that when people think of having a dog for a pet, greyhounds do not typically come to mind. While walking their dogs they have received or overhead comments such as "Is that a Great Dane? I didn't know greyhounds came in that color. Mommy, is that an ant eater?" 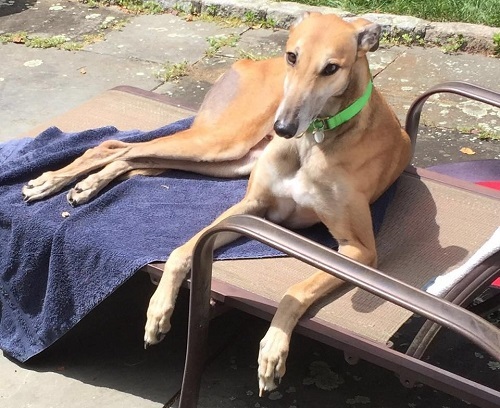 Alfie is 4-years old and currently up for adoption.

All of their rescued greyhounds come from racetracks, breeding farms, or are puppies that cannot race due to illness or injury. A racetrack generally has 8 - 12 kennels, and each kennel holds around 66 dogs. Most of the dogs Christine receives are from the racetrack kennels in West Virginia, Alabama, Florida, and the breeding farms in the Midwest. When a dog is racing and breaks a leg, depending on the severity of the injury, the kennel owners may try to rehabilitate it but it's not common. Generally this would only be considered if the dog was a champion racer. Otherwise the mentality is that an injured dog is just a dog that's taking up space and not making money, and rehabilitation is a waste of money.

"Greyhound racing kennels this is their business and the dogs are the product of that business. And if the product isn't making money it has to go to make room for new product to come in that's making money. And there is only so long that these kennels can hold the 'non-producers'." ~ Christine

Christine spent a lot of time and effort establishing relationships with these businesses. Staying true to herself and her mission, over time she was able to gain their trust and cooperation. When a dog has been injured or cannot breed any more litters, she receives a call from the company asking if she can "help". This generally means providing funding for surgery, post-op work, and foster care. They send her a list which can sometimes contain between 20 and 30 greyhounds, from which she has to choose how many her organization can take on at that time. Continue reading on Petopia's Blog, Zoe's Couch