A small city in heavily Christian northern Florida is about to become home to the first public monument in the United States dedicated to atheism.

Florida members of American Atheists, a national advocacy group, plan to erect a 1,500-pound granite display in front of the Bradford County Courthouse in Starke, Fla., next month, opposite a controversial year-old display of the Ten Commandments outside the same courthouse.

"We'd rather there be no monuments at all, but if they are allowed to have the Ten Commandments, we will have our own," said Ken Loukinen, the director of regional operations for American Atheists who designed the monument.

The new structure will feature quotes related to secularism from Thomas Jefferson, Benjamin Franklin and American Atheists founder Madalyn Murray O'Hair on a 4-foot-high panel, alongside a bench. It will stand in a small square in front of the courthouse, opposite the 5-foot, 6-ton Ten Commandments monument sponsored by a Christian group.

The dueling monuments in Starke are part a growing number of conflicts about public displays of religion. In February, a district judge dismissed an American Civil Liberties Union lawsuit and ruled that another Ten Commandments display in front of a courthouse in northwestern Florida's Dixie County could stay put. Controversies have also erupted this year over Ten Commandments displays in public schools in Oklahoma and Pennsylvania.

American Atheists sued Bradford County last July, saying the Christian-sponsored monument in front of the county courthouse was a public endorsement of religion. In response, the county asked Community Men's Fellowship, the organization that sponsored the display, to take it down. But the fellowship replied by saying it had "prayerfully considered" the request and would not comply. The county and American Atheists went to a court-ordered mediation in March and settled upon the atheists getting their own monument.

Will Sexton, an attorney who represented the county in the settlement, said it never intended to sponsor any religion with the Ten Commandments monument, nor is it endorsing secularism with the new atheist display.

"In October 2011, the county adopted a set of monument placement guidelines that created what we saw as a free speech forum in the courtyard," he said. Sexton explained that private groups can apply to place a monument in the space, and that signs on display indicate that any such works do not represent the position of the county.

The county's free speech forum guidelines say monuments must commemorate "people, events and ideas which played a significant role in the development, origins or foundations of United States of America or Florida law, or Bradford County," cannot be permanent and cannot be "libelous, pornographic or obscene." Sexton said the atheists' planned monument met the requirements.

"What the atheists agreed to is something they could have originally been approved for without a year of money and litigation," he added.

A representative of Community Men's Fellowship did not respond to phone calls from The Huffington Post, but the organization posted a statement on its Facebook page after the settlement was reached saying that "God worked this out."

"On the very first day we were informed of the lawsuit, [member] Dan spoke up and said he believed the Lord had given him a word on how to deal fight this thing. He was right. Praise God," the statement read. "We want you all to remember that this issue was won on the basis of this being a free speech issue, so don't be alarmed when the American Atheists want to erect their own sign or monument. It's their right. As for us, we will continue to honor the Lord and that's what matters."

The Stiefel Freethought Foundation, a group led by millionaire atheist Todd Stiefel, funded the new atheist monument to the tune of $6,000. It will include a quote from the Treaty of Tripoli, a 1796 peace agreement between the U.S. and North African Muslims, which has become a rallying point for atheists because of its declaration that "the government of the United States is not in any sense founded on the Christian religion."

The display will also feature Biblical quotes that supporters say correspond to the Ten Commandments, such as Deuteronomy 13:10, which says to "stone him with stones" so "that he die" in reference to people who worship other gods. (The first commandment reads, "You shall have no other gods before me.")

Loukinen, the organization's regional operations director, said American Atheists resorted to putting up its own monument only after trying to get the original display removed, and the group has no plans to erect any more monuments in other cities or states.

There is at least one other atheist monument in the U.S., on private land in Lake Hypatia, Ala. It's dedicated to "atheists in foxholes" and was constructed in 1999 by the Freedom From Religion Foundation. 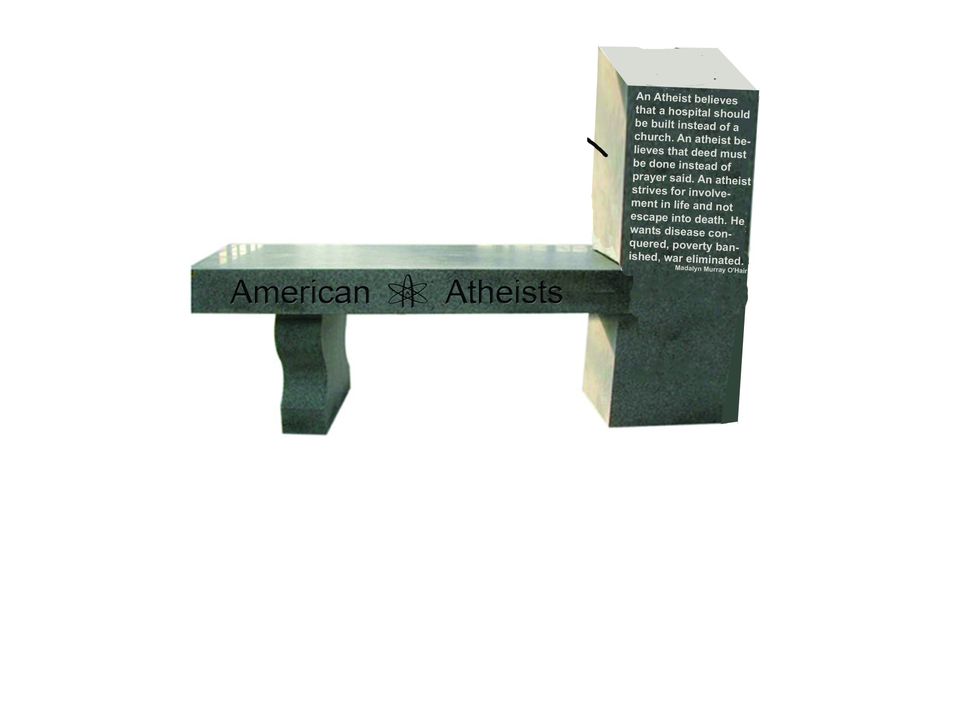