When you build a skyscraper using steel beams you build it using crossbeams. When these buildings come down, there is a high chance some of those crossbeams will remain standing.

When two planes took down the World Trade Center towers on September 11, 2001 it should really be of no surprise steel crosses were left standing.

What should be a surprise is that someone pulled one of these from the rubble, had it then cut to look more like the Latin cross worshipped by Christians around the world, blessed by a priest and then called a "miracle." 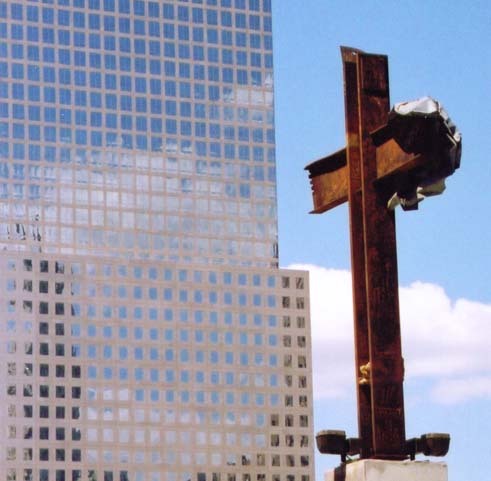 This cross is a manmade symbol of Christian worship. It does not symbolize anything of significance in the history of the attacks on 9/11 and it has no place in a 9/11 museum on its own. When the 9/11 Museum in New York City announced it's plans to include this cross in the museum's memorial, it should be as no surprise that American Atheists took offense and filed a lawsuit to stand up for American's First Amendment rights.

Proponents of this cross claim this is not a religious symbol because it is nothing more than steel crossbeams found in the rubble. Dave Muscato, PR director of American Atheists had this today on his personal Facebook account:

[...] You dare to say this is a historical artifact and not religious? Give me a break. You made it religious. You didn't have to do that. If you just want a historical artifact of a steel crossbeam in the museum then you shouldn't care which one it is. The reason you want this one specifically is that it's NOT just a steel crossbeam anymore. You have made it into a religious symbol.

This steel beam was modified; it was not pulled from the wreckage and treated as a historical artifact. To claim it was is purely dishonest.

Now, to be fair, Christians did die on those planes and in those towers, but so did Muslims, Buddhists, atheists and other religious or non-religious citizens. These citizens who do not worship a cross are left unrepresented. If you want to put up a cross to memorialize the people lost on that tragic day, you must represent them all. It is really that simple, all or none.

The museum has claimed that it plans to include a Jewish star and Hindu holy water in the museum, yet nothing for atheists. As Muscato points out in his Facebook post, statistics tell us one in six people that died on 9/11 were not religious.

American Atheists president David Silverman visited Fox New's Megyn Kelly and she laughed off the claim that atheists were being discriminated against. Her claim that this cross was found in the rubble and no atheist symbol was found negates Silverman's claim. Yet she had nothing to say about the planned inclusion of Jewish and Hindu symbols that had not been found on the grounds of the World Trade Center.

Kelly berated Silverman demanding he prove atheists suffer from dyspepsia and headaches from being forced to look at this cross. She clearly missed the point of the entire lawsuit and only wanted to focus her attention on demeaning the lives of atheists lost in those attacks. When Silverman tried to explain that atheists do not suffer those symptoms from simply seeing the cross, yet do suffer from remembering those terrible events while at the same time facing religious discrimination it would be of no surprise they would suffer from physical and psychological distress.

This is clear-cut discrimination against a minority group. You cannot hide behind the claim this cross is historical because it was found on site. The cross is no longer the cross that was found in the wreckage. It has been cut, blessed and had Jesus' figure carved into it. It is no longer wreckage and is now religious art. If someone wishes to display this as a 9/11 memorial piece, they should do so on private land and if they must have it inside the museum, then every single religious organization and non-religious organization must be allowed equal representation.

The American Atheists lawsuit against the cross's inclusion is not, as the media will tell you, about atheists being offended. The cross does not offend atheists, what offends atheists is being pushed aside and discriminated against. Atheists died on 9/11 and yet they are not being offered inclusion in a memorial. That is what this lawsuit is about.

Those like Megyn Kelly wish to make this whole ordeal about atheists stomping on the rights of Christians, yet the lawsuit does nothing of the sort. Playing the victim has been the Christian right's go to move whenever they are challenged when they attempt to use their religion to discriminate against other groups.

The U.S. Government is bound by the Constitution to not favor any one religion, and this also holds true for the non-religious. A federally funded museum is not the place to flaunt your Christian beliefs if others are not going to be reflected equally. The case is cut and dry, and anyone in this country that values the separation of church and state and wishes to stand up for the Constitutional rights of the American citizens should stand firm behind this lawsuit and be sure that every religious or non-religious group is represented equally or no one is represented at all.