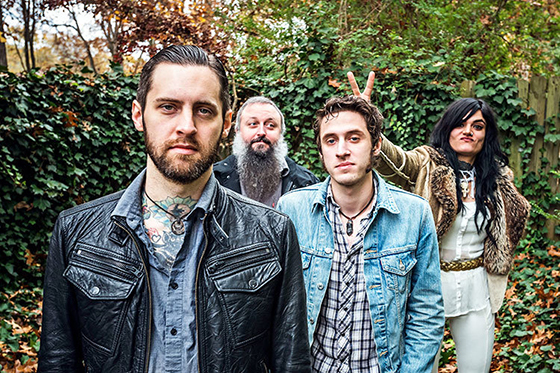 Royal Thunder is a very soulful hard rock band. There is a lot of emotion behind their music and it was evident on their recent tour opening for The Sword as they stopped here in Detroit on April 9th at the Majestic Theatre. With a set ranging with songs from their debut self-titled EP from 2010 onto material from 2012's CVI and 2015's Crooked Doors full-length albums, they sounded as much of a seasoned band as anyone else. With the emotive voice of lead vocalist Mlny Parsonz, Royal Thunder is a product of so many eras and influences, but they flawlessly bring it into modern times not holding back one ounce and performing a live set that was everything you'd expect after hearing their music, but so much more.

Before the Detroit show, I was able to sit down with one of the founding members of the band and guitarist Josh Weaver and we talked about what influenced the sound of the band.

Royal Thunder is very genre-less. When you first started, talk about developing the sound of the band.

Some of the early songs off the EP "Mouth Of Fire" and "Hotel Bend", we still play those. Those were early on, early songs in the evolution of Royal Thunder. We all had so many influences. Luckily, we grew up in a time where you weren't really influenced by the Internet. I was born in 1979, but grew up in the 80s and 90s, and back then, your musical palette was developed by the research you did in the music. I would walk through the woods and take some of my allowance and buy a CD, not a CD, a cassette at the time. You spent your money in it and you listened to it. Even if you didn't like it the first couple spins, you look at the artwork, you read the lyrics, and get to the point where you go 'I kinda get this!' and it grows on you. I think that's a big part of Royal Thunder's sound is the fact that none of us have really been ever trained musically. We don't know music theory. We just do what we do kind of thing.

I love how this band is like if Jefferson Airplane and Black Sabbath had a beautiful baby. What really influenced the sound of Royal Thunder?

For me, it was bands like Nirvana, Smashing Pumpkins, The Cult, The Cure, all those 90s bands that really had their own sound and they had their own thing going on. None of those bands that I named off can you name another band that sounds like them. Those were big influences on me. I always wanted to do what I had envisioned in my head or what came out of me, instead of wanting to sound just like this band. I think it was just a matter of all of those influences kind of put in a blender coming out.

So you left Relapse Records and are now with Spinefarm. Why the move?

It was just time we moved on. We had a long working relationship; we still have a working relationship with Relapse. They're a great label, but we just moved on to something different. Just trying something out. There's a lot of great people on Relapse. They really helped us out a lot. Spinefarm is really excited to work with us and we're super stoked to work with them.

What was it about Spinefarm that attracted you to them?

They are all very passionate people that work there. They all love music. It's a close knit, almost family-like group of people. We got to go out and meet up in New York and see the office. Go out to dinner with them and talk music and really took our time on making sure that's the next step we wanted to take. We're really super excited to work with them. They are such great people.

My roots are in hip hop and when I think of Atlanta, I think of Outkast and all sorts of crunk music, but what's the rock scene like down there? Is there any sort of sound/influence native to Atlanta these days?

People say there is. It comes up a lot in interviews. I think bands like Mastodon, Baroness. I don't even know what to attribute that to. There's definitely a sound that comes out of the south, but I always make a joke and say that maybe it's something in the sweet tea or cornbread. (laughs) Something southern in there that comes out in the music.

Since your first album CVI on through Crooked Doors, how have you progressed as a band?

From the time CVI came out until we got done with Crooked Doors, I feel as is, its not a matter of feeling, we did so much touring that it gave us so much experience. We grew as musicians. I think we became more confident players, playing so many shows touring on CVI kind of set the stage for Crooked Doors going into the studio. You really find yourself playing music out live.

What's next for the band?

What do you want the legacy of this band to be?

I want to leave a mark in rock-n-roll for sure. I want to inspire people, move people, make them feel something. Hopefully, through music, help people get through hard times.