UPDATE: Boners BBQ has issued a personal apology to Stephanie S. via Facebook.

Frustrated by a woman they say didn't leave a tip after using a coupon to eat at their restaurant, employees at Boners BBQ in Atlanta called out the customer on Facebook and Twitter and linked to her personal social networking account.

It all started when Boners BBQ posted complaints on both Twitter and Facebook about the behavior of restaurant customer Stephanie S., whom they say failed to tip waiters on a $40 tab she paid for in part with a Scoutmob discount. The Tweet and Facebook post have since been removed, but users managed capture screenshots before they were taken down. 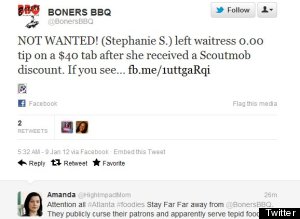 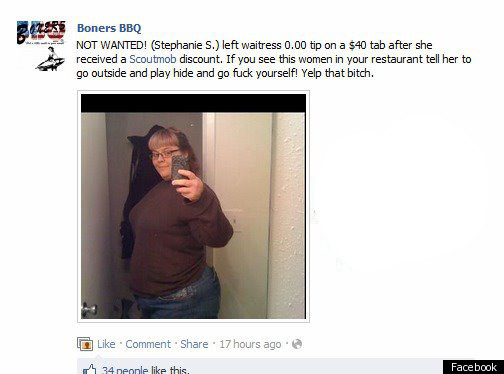 The strongly-worded posts made some social networkers wonder whether other factors had possibly contributed to Boner BBQ's reaction. Browsing the restaurant review site Yelp, users pointed to a negative review written by user Stephanie S. from Atlanta, which was posted on the site Jan. 8, one day before the possibly retaliatory attacks were posted.

In an e-mail to The Hufffington Post, Stephanie S. confirmed that she did in fact eat at the restaurant and write a Yelp review. But she says she didn't fail to tip waiter, as the restaurant claimed.

She and her husband decided to celebrate his birthday at Boners BBQ because the restaurant was nearby and was offering a coupon through the website Scoutmob. The couple paid for the meal, which cost $30 after the coupon was applied to the total. Stephanie said they left two twenty dollar bills on the table and left.

Stephanie then gave her account of what happened next:

On the drive home I discussed my feelings about the restaurant with my husband and decided to write a review on Yelp. We decided to go there because of Yelp so I thought it was an appropriate forum to explain my experience. I honestly didn't worry too much about it and barely even looked at my computer until the next afternoon when I found two emails from people letting me know what had happened on Facebook.

I did leave a tip and my review was not scathing by any means. The response from Boners BBQ has just been astonishing to me, especially since it came from the owner of the business.

Only Boners BBQ knows whether the Facebook and Twitter posts were written in response to the Yelp review, as users have suggested.

In response to backlash on social networks, the restaurant has apologized for their behavior in a series of Facebook updates, explaining some of the factors that contributed to their reaction. 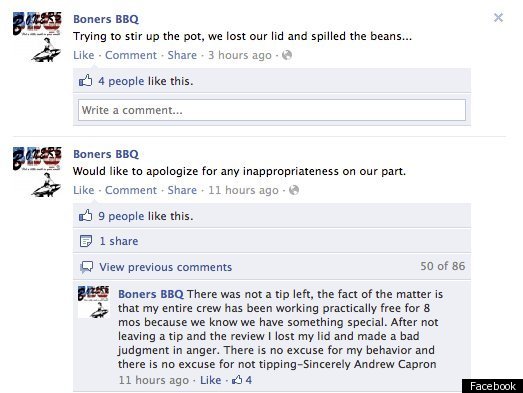 Hopefully for Boners BBQ, customers will be forgiving of the negative posts. But for now, the restaurant's rating continues to fall on Yelp as users post negative reviews in response to the recent events. 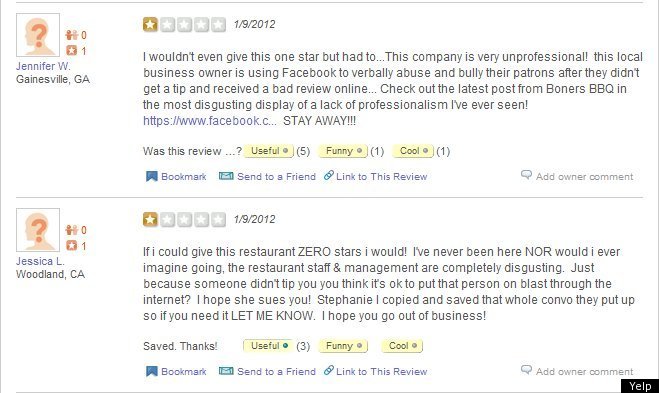