Here are brand new images from Atlanta's 2013 Living Walls Conference that invited about 20 street artists from the ATL and around the world, including Argentina, Italy, and Israel. Divided among five specific neighborhood locations, this year's Living Walls represents a cross section of the figurative, the illustrative, the symbolic, the decorative, the painterly, the abstract and a hybrid mash-up by Roti that is surprising to many. It also features some typical community mural influences. 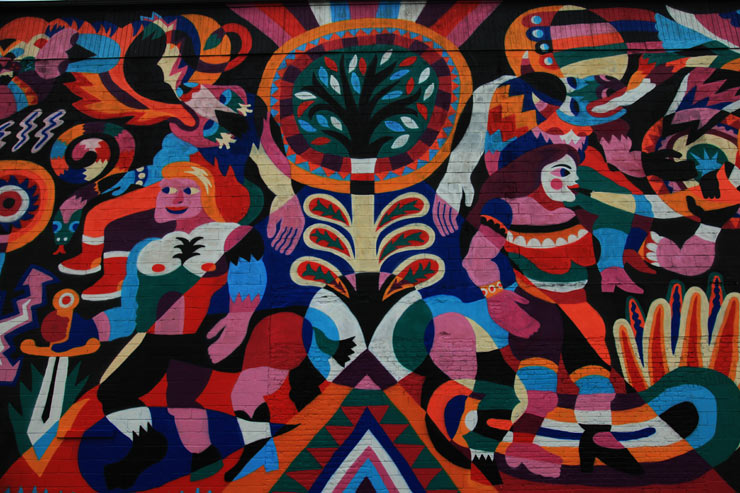 Largely overlooked by many in its own city during the first four years, Living Walls is a timely injection of a vibrant youth culture that is recognized outside of it. The programming for Living Walls has also made it one of the few festivals that has always included educational and academic components intent on studying various arts in the streets; their forerunners, their associated labels, and their relevance to the future. 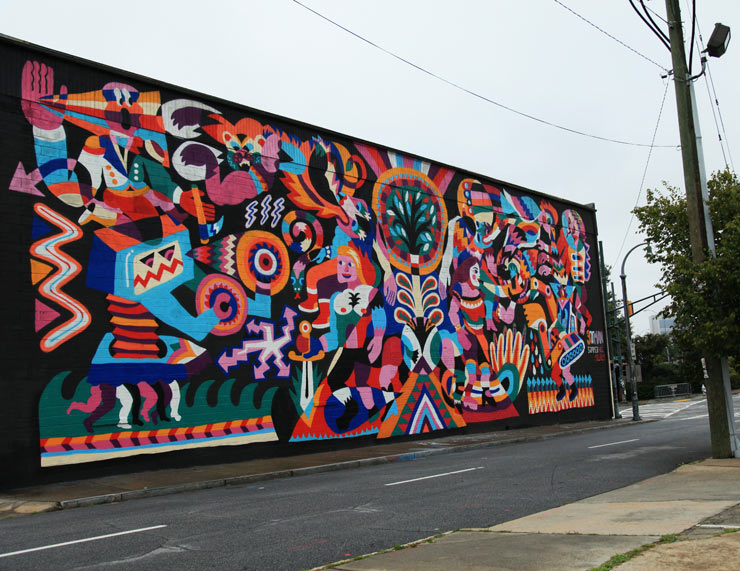 The 2013 organizers are the first to acknowledge that this year's murals were approved before they went up and as the tally nears its 100th wall, this is a subtle but meaningful shift at #LW2013 that is mirrored in degree in cities playing host to these multi-walled installations around the world. For better or worse, there is a move toward more permission-based work that is vetted before a body of elected and selected community leaders. Without delving into the politics of each city (and sentiments and practices range widely) it is simply worth noting that as the street art movement gains attention worldwide it is also finding itself bending toward "legitimizing" bodies whose will and aesthetic judgments may alter the content and the spirit of the works produced. In fact, one may need to reevaluate whether the term "street art" is used too loosely and you may more accurately describe these events as mural festivals. 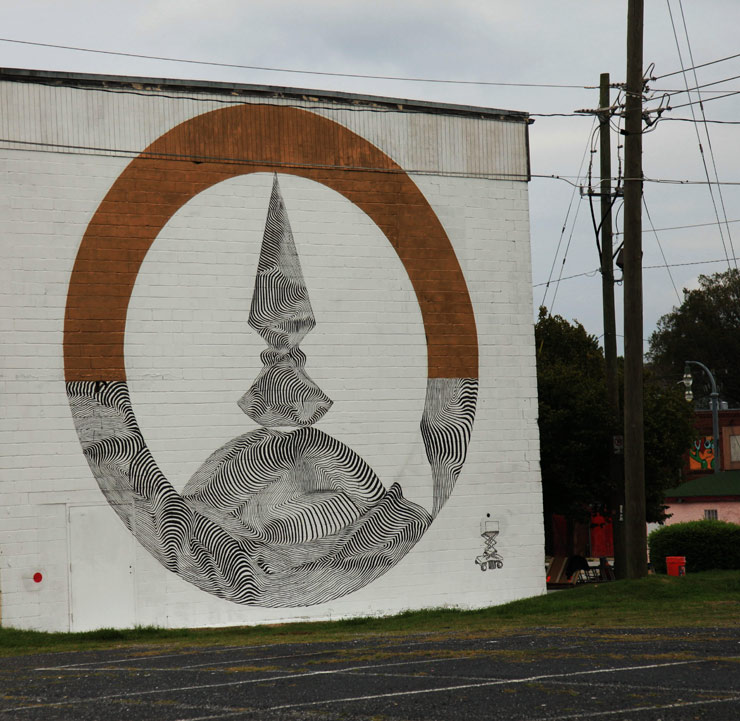 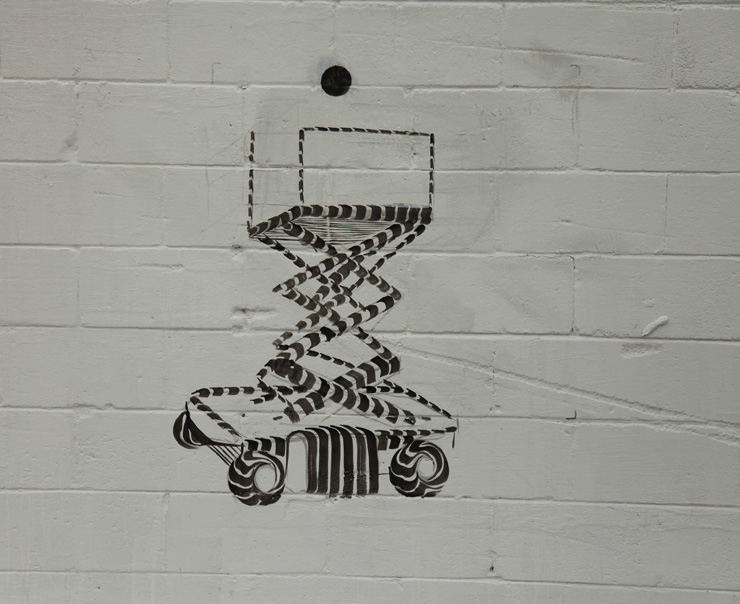 In response to an outcry by a handful of folks outraged by nudity and serpents in artist compositions from Living Walls last year, founder and Executive Director Monica Campana and her LW co-organizers felt it was a responsible, good faith move to submit artists and their proposed work to a somewhat bureaucratic series of approvals by city officials this year. All tolled it was a process that took about five or six months, including a review of sketches and artists' statements. Creative Loafing Editor-in-Chief Debbie Michaud likened it to something akin to "Voting on Art" in the print edition of her thoughtful editorial on the city's public art policy for the weekly community paper.

There is no real harm in any of this unless it infringes on your definition of free speech, so goes the current reasoning. But let's keep an eye on it, advises Michaud, and you'll probably agree. Certainly the likelihood of a whipped-up public hysteria by show-boaters and outright haters is vastly reduced as a result of this approval process, but the likelihood of groundbreaking artwork may also be lessened when pleasing everyone becomes paramount. Most people can easily point to an example or two of municipal public art that offends no one but similarly pleases no one. Such is the dulling effect of art by committee. 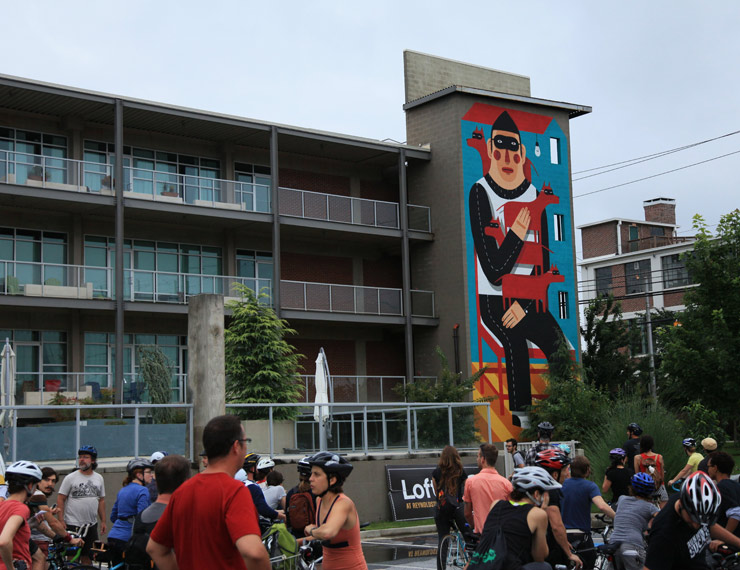 This mural Agostino Iacurci was part of the bicycle tour given for Living Walls 2013. (photo © Jaime Rojo)

Street art (or urban art) at its roots blossomed in the last couple of decades at least in part due to the illegal graffiti movement, avant-garde artists, intellectuals, political theorists, and critics of the so-called mainstream and much of the art making ethos that evolved from these calls for the autonomous selection of location, method and content. The idea of seeking approval is anathema to many a street artist, and meddling from the outside is nearly reproachable. Because no permission is usually sought, it is also accepted that the work itself is never guaranteed to have a long-running life and its meaning may be misunderstood, misinterpreted or altogether missed.

For most the Street Art practice is an outcropping of personal inspiration or appeal, an experiment in the street laboratory. It may be dissed by another artist or "buffed" (painted over) by someone the following day, but all of the other choices are on the artists' terms alone. In our tours over the last week through Atlanta we saw plenty of this self-directed sort of stuff on abandoned gas stations and buildings or on semi-approved graffiti walls that are unofficially set aside for that form of expression; it just wasn't part of the formal festival. To expect that an organized annual event in any community could hew to that method of art making is probably delusional. But these new murals are also probably not street art, for those concerned with labels. 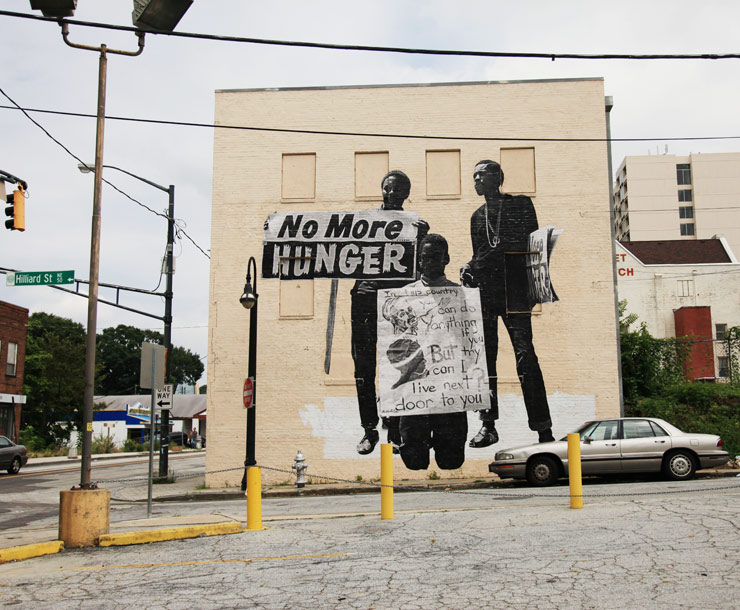 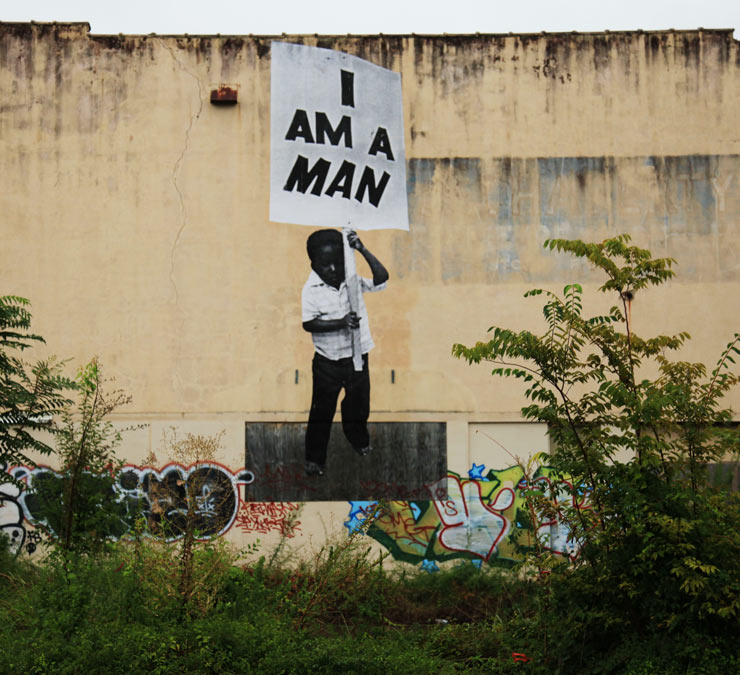 Aside from those considerations, Living Walls Atlanta is notable for some new, very good art by some accomplished artists whose work can have a transformative quality. Many a visitor voiced positive opinions with regularity as we hung out on the sidewalk while the artists were working and some drove by honking and giving the "thumbs up". One easily got the idea that this is a truly community powered organization doing the work. Given the logistical needs in pulling off a program like this, it was good to see the donations from local businesses for food, housing, and hosting. A registered non-profit, Living Walls also relies upon a band of committed and organized volunteers, many of whom themselves are artists, creators, students, urban planners, baristas, bartenders, sports mascots and the like. Many would leave their responsibilities volunteering only to go to their regular jobs, and return afterward to help some more. 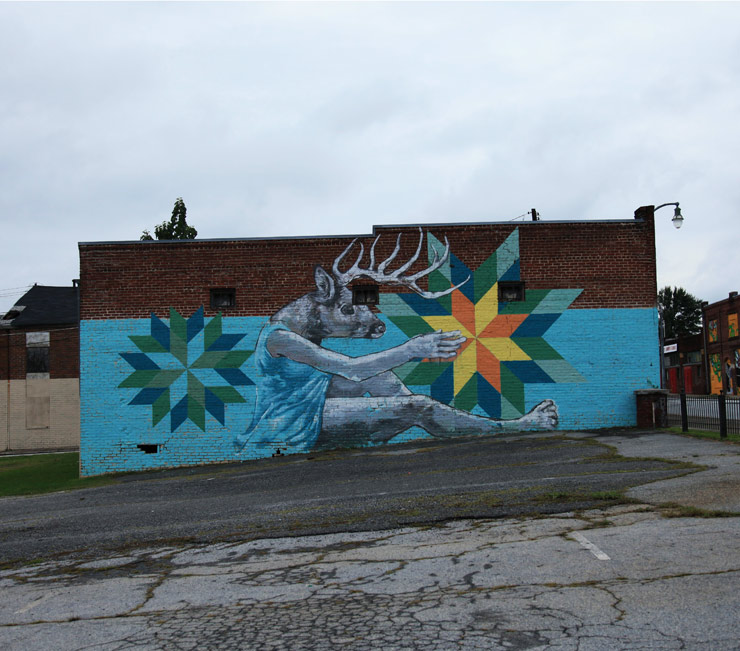 If you are looking for a template on how to successfully launch a mural arts festival that celebrates the quirky creative spirit and that has not allowed itself to be overtaken by big commercial interests, here's one to study. For an arts movement that grew from the grassroots, it is good to see it is still inspired more by community and a deep respect for artistic expression than by anything else. 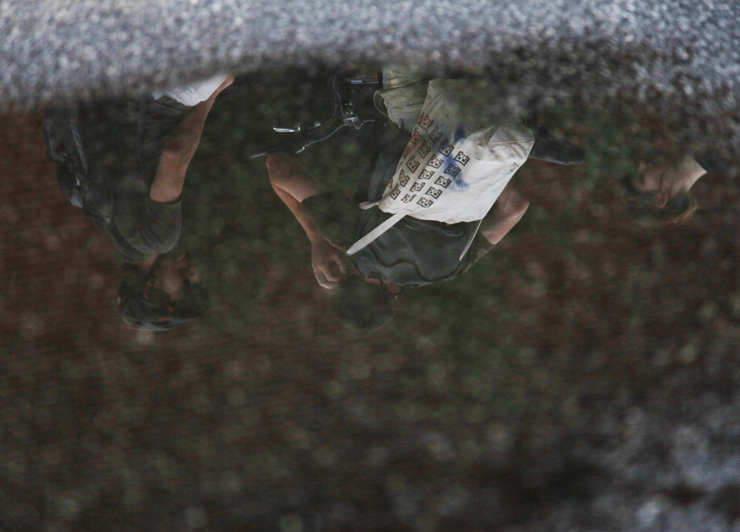 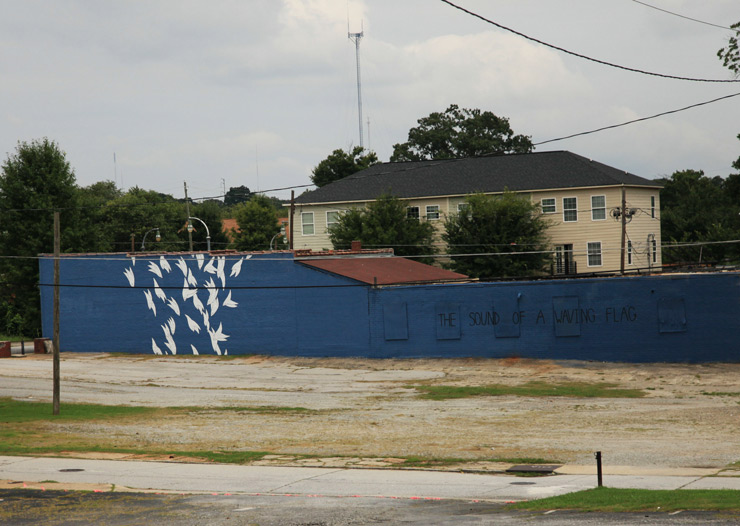 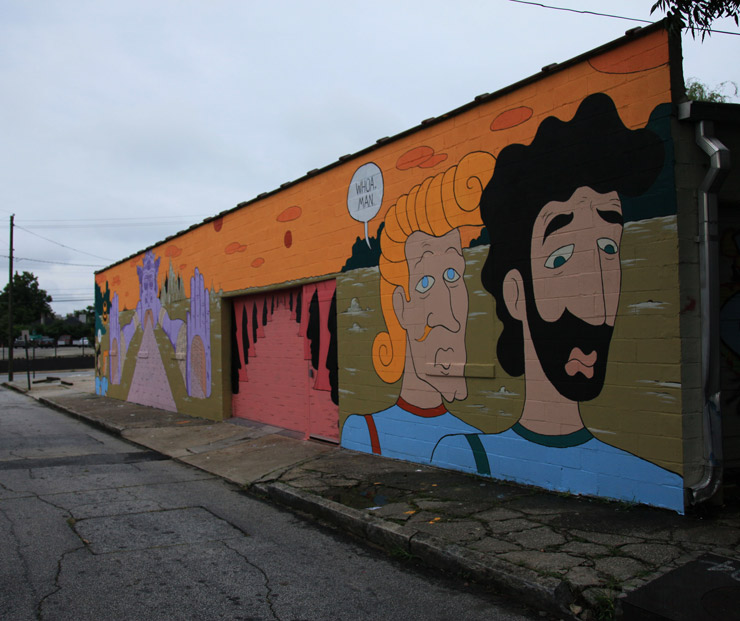 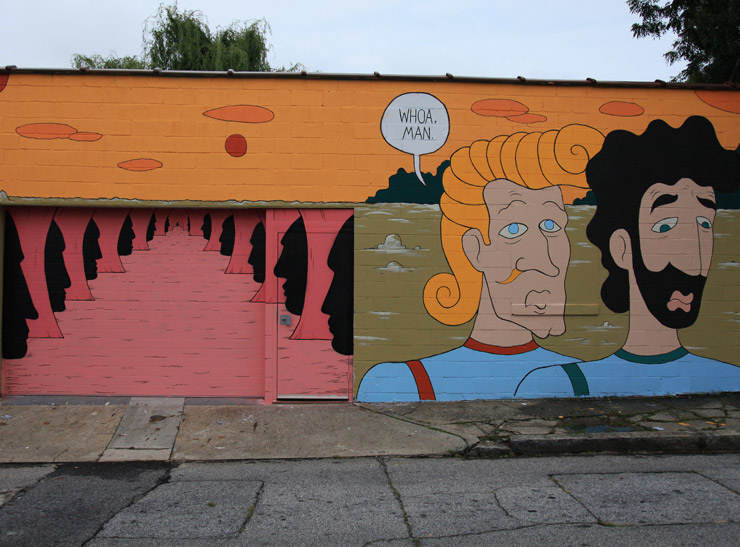 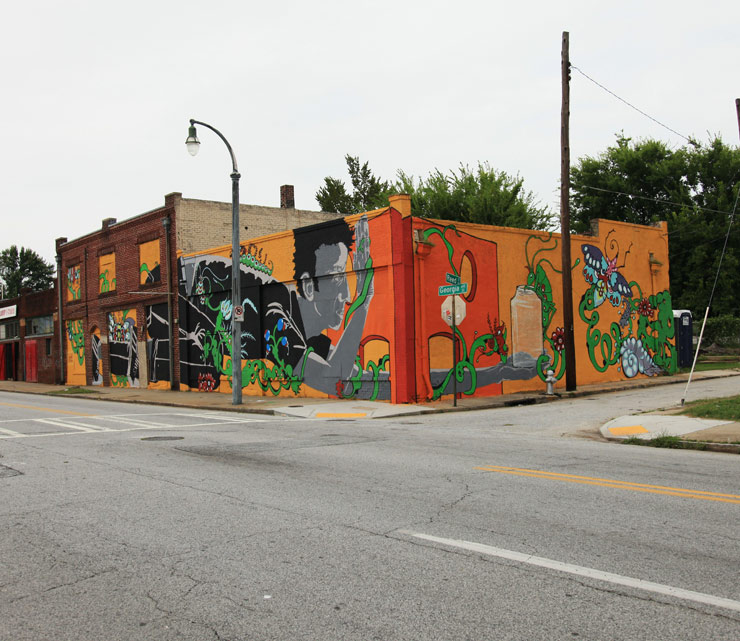 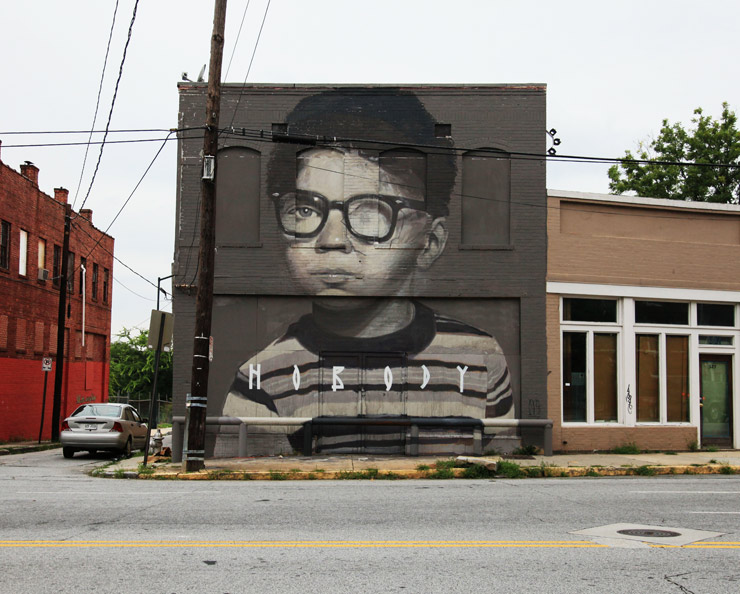 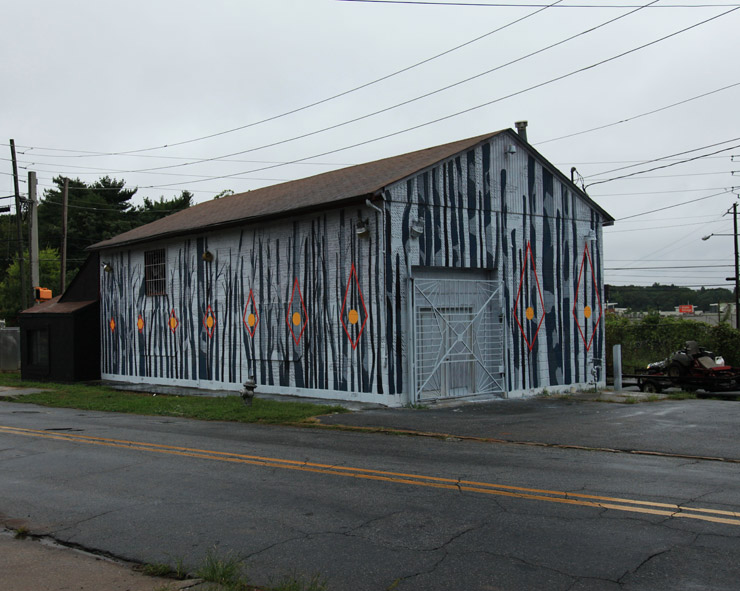 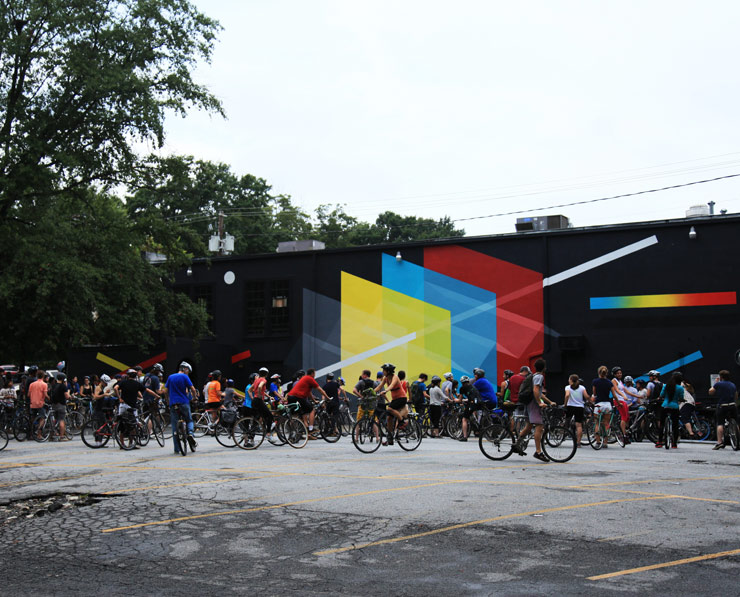 The bike tour takes a look at this piece by Christopher Derek Bruno at Living Walls 2013. (photo © Jaime Rojo) 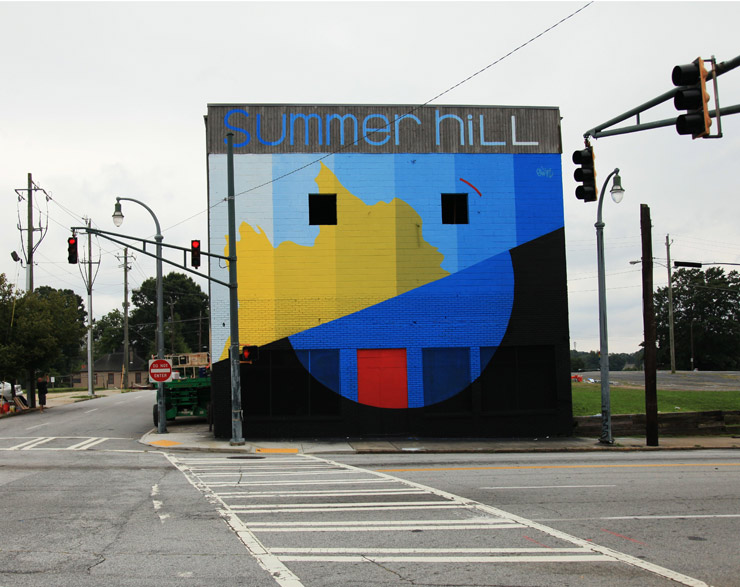 Elian at Living Walls 2013 with a sign by Howdy Neighbor denoting the name of the neighborhood. (photo © Jaime Rojo) 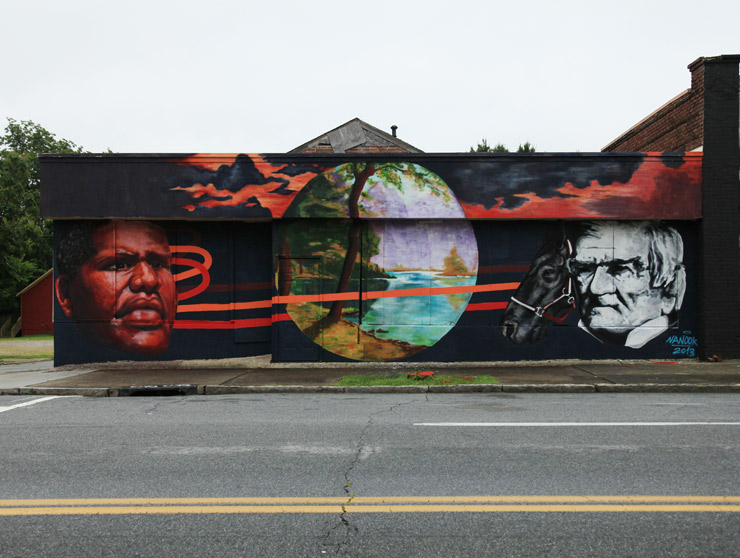 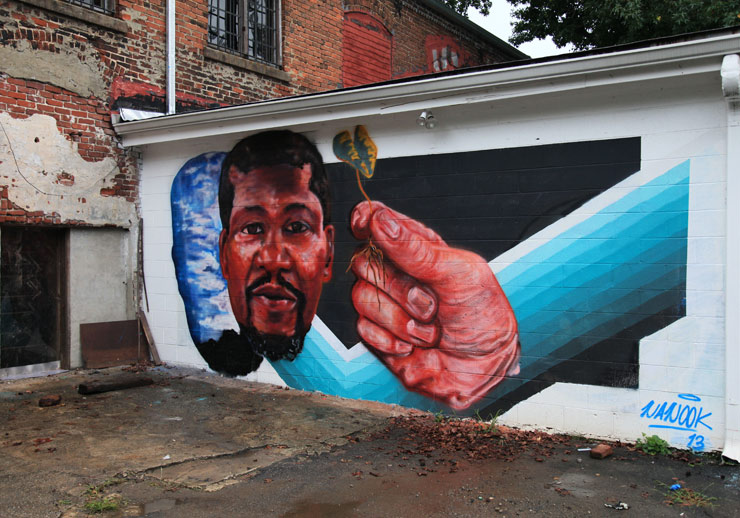 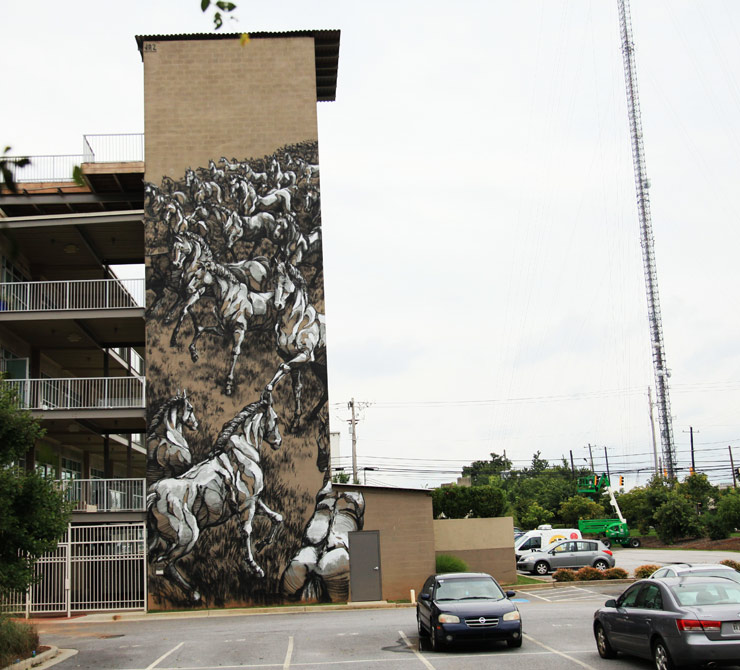 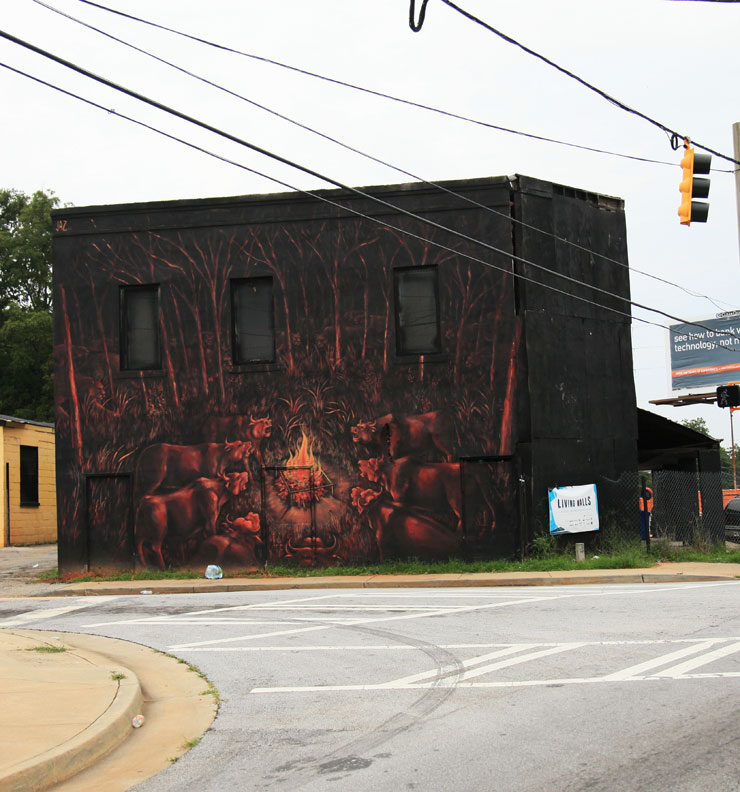 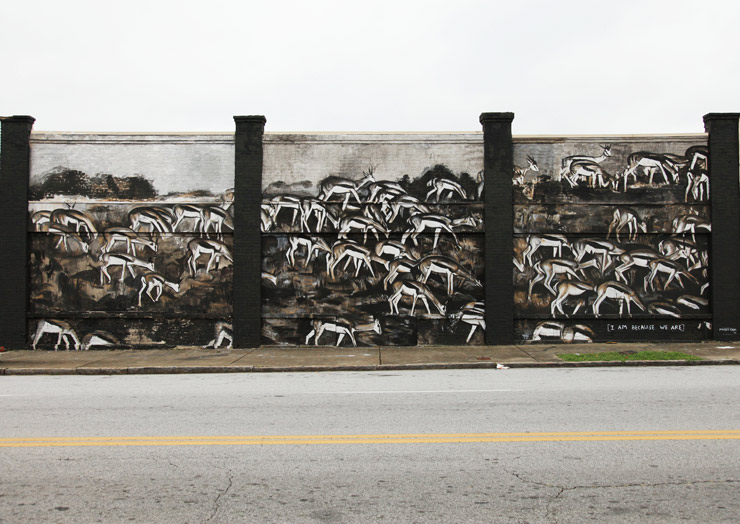 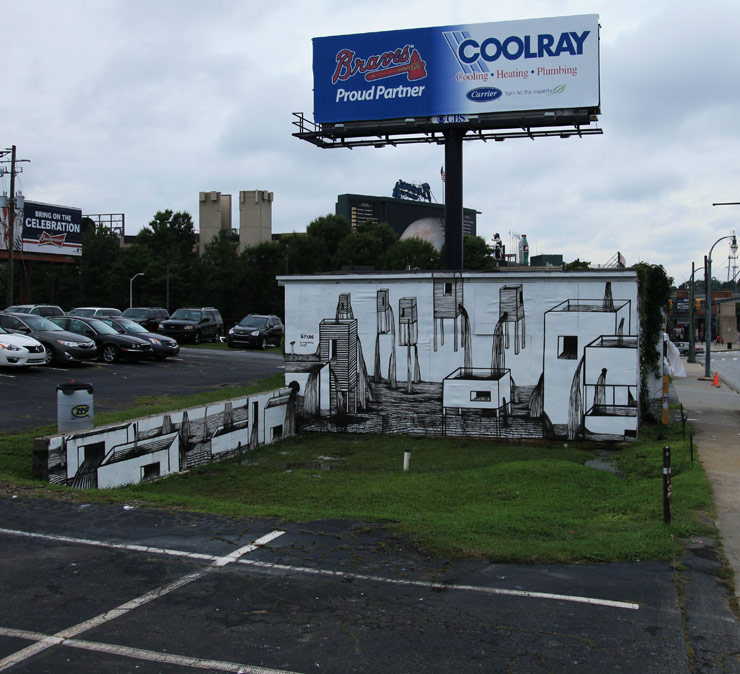 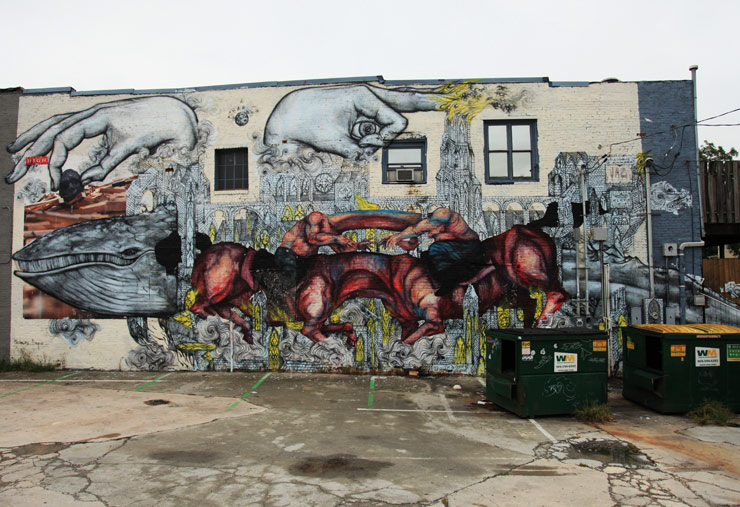 Roti created his piece incorporating Jaz's painting from last year and part of an advertisement for the High Museum at Living Walls 2013. (photo © Jaime Rojo) 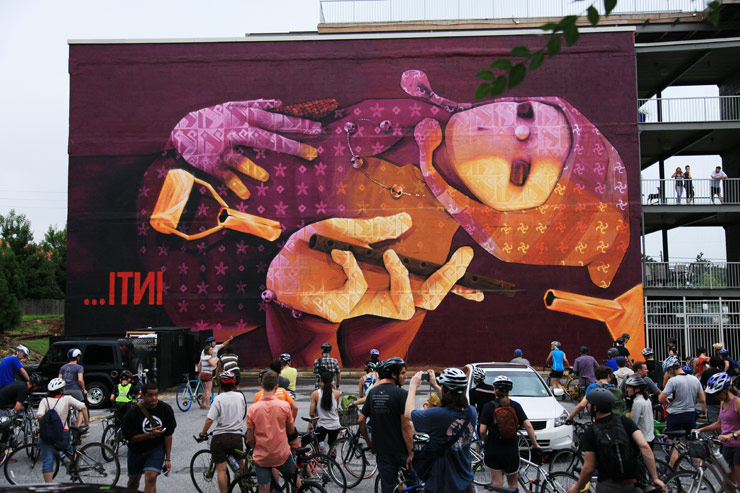