A new mural was recently revealed on a South Atlanta public wall, but it looks like the painting was a bit too revealing itself. The piece, made by a professional Argentinian street artist Hyuro, has sparked outrage in the local community because it depicts a naked woman. Located in the town of Chosewood, the work is across the street from a church and also near a mosque, a federal penitentiary and day car center, with school buses passing by. 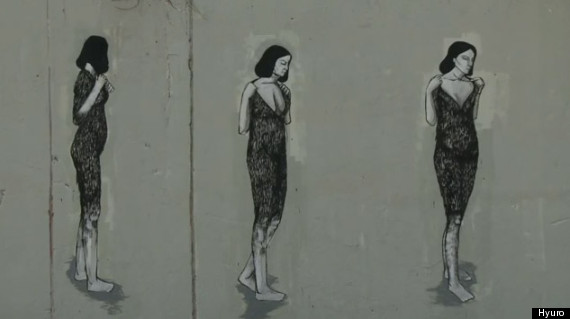 The painting starts with a full frontal view of a naked woman. Although neighbors like Tajiddin Muwwakkil told Channel 2 news it was "offensive" and "pornographic," it should be noted the street art style is not exactly realistic. Nonetheless, as a passerby stated to the same source, "The [pubic] hair is showing and nakedness."

After the first depiction of the nude woman, the painting progresses in a stranger direction, one which has acquired a few different interpretations and reactions. The depicted woman then puts on a dress, which morphs into fur, which she then sheds. The woman is nude once again as the absurd shedding dress turns into a wolf-like creature and walks away.

So what does it all mean? One anonymous resident found inspiration from the work, even taking her children for a visit to the site. She explained to Channel 2: "She's taken all the wildlife off her and now she's back to being in a godly world... I understand exactly what it is this woman is going through." The work has also received a highly positive response on Facebook, one comment from Allen Rodi reading: "This is the BEST thing to happen creatively in DECADEs ... Way to get the DIALOG about art and our city amped up!" 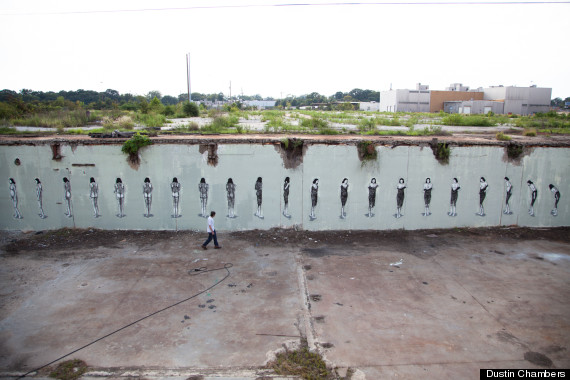 Yet resident Cathy Taylor thought any message the artist intended was overpowered by an implicit message. "How can you tell your child that it's okay for a female to disrobe and you know we got a prostitute around the corner walking the streets every day," she asked NBC News. Yet on Facebook Daniel Bryant challenged automatically sexualizing the work, writing: "Nudity is not automatically sexual—by sexualizing a nonsexual image, what are we teaching our kids?" Looking on Hyuro's Flickr, it appears that the fluidity between woman and beast plays a recurring role in her work, which often features hybrid creatures. 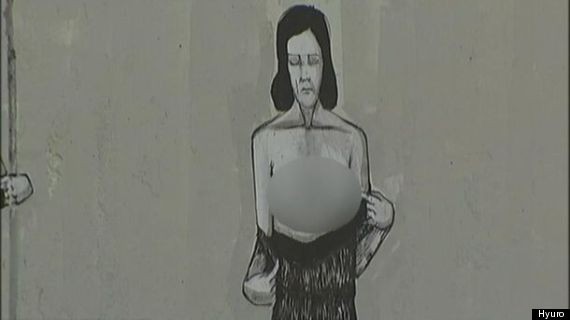 The contentious piece is part of Living Walls Conference, a non-profit that brings professional artists from around the world to create artworks on Atlanta's empty walls. The artists often don't have a clear vision of what they will create until they arrive at the location and assess the feel of the community. The city asserts that Hyuro violated her contract, which stated that the "value to the general public in viewing the work is not outweighed by any existing negative public interests related to aesthetics, additional sign clutter, and the public's safety."

We spoke with Alexandra Parrish of Living Walls Conference, who said although some community members have found the work offensive in proximity to the church, the church itself has not expressed outrage. "It is a portrait of transformation, the mural reflects the teachings of the church. The huge outcry is not from them," Parrish said. She also expressed satisfaction at the dialogue the work had sparked among the community, commenting "it definitely has the neighborhood engaged."

Living Walls Conference is submitting the mural to the Urban Design Commission for review, and the community board meeting about the controversy is set for September 10, 2012. If the piece is deemed inappropriate it will be painted over. 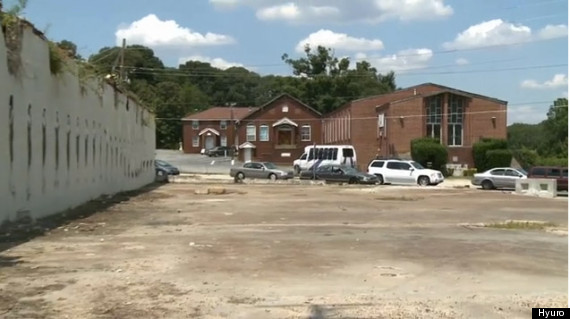 What do you think? Does public art have a responsibility to incite dialogue even at the expense of controversy? Or did this piece go too far and breach the terms of its contract? Is censorship ever the answer? Let us know your thoughts, and see the video below to get more of a sense of the neighbors' reactions.