I spend a lot of time writing about how much more producers and non-profits could be doing to encourage a new theater audience. That begins at the youngest of ages. As arts education continues to get cut across the country, someone needs to pick up the slack. There need to be more affordable shows that parents can take children to see. So I am happy that Atlantic for Kids exists. 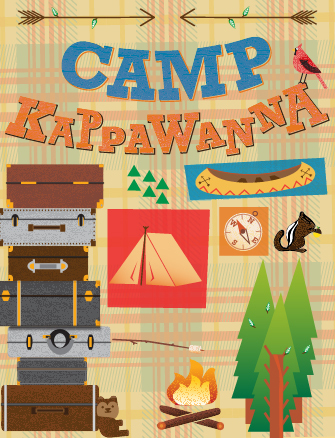 But the theater company is more than that. It also has an acting school, including after-school programs, a summer camp for kids and teens and a partnership with NYU. And Atlantic for Kids presents two shows for kids per year. The shows, which cost only $15 or $20 for non-members ($7 for members), are performed on the set of the current Atlantic for adults show. Right now, Atlantic for Kids is presenting a musical about summer camp co-written by singer/songwriter Lisa Loeb. Yup. Could anything sound better?

Recommended for ages 7-11, Camp Kappawanna, inspired by Loeb's own nostalgic summer camp memories, portrays the fear and excitement of leaving home for the first time. The music and lyrics were written by Loeb (who also has a "Camp Lisa" album), Michelle Lewis, Dan Petty and the book was written by Cusi Cram and Peter Hirsch.

Director Alison Beatty, who is the Artistic Director of the Atlantic Acting School and oversees the Atlantic for Kids productions, said Camp Kappawanna came to them, and it is one of the first shows they've had a chance to develop with the creative team.

"Our mission is very tied into the Atlantic mission," Beatty said. "The story is really primary to us. What are the messages of the piece? Will kids connect to that message? We're finding stories that are smart, that don't talk down to kids."

Beatty said Camp Kappawanna came to the Atlantic through a series of connections. The writing team had changed throughout the years and "it came in a not quite completed stage." The company did a workshop of the show before the full production currently onstage.

"I thought the theater was a good place for the show, as we associate The Atlantic Theater with doing great work, and we thought they'd do a non-schlocky version of our musical and also bring a quality team of serious actors and theater folks into the project," Loeb stated via email. "The music and story of the show are very real and we thought they'd be able to bring a truthful, real-ness to the characters that the audience could easily connect to."

Running now through April 12, Camp Kappawanna has public performances Saturdays and Sundays at 10:30am and also a performance April 8 and April 10 at the same time. Then, during the week, it does performances for school groups. The Atlantic provides the schools with a study guide, cast info, a description of the show and a teaching artist who comes in to work with the kids. Camp Kappawanna is performed 3-4 times during the week for these schools, which are from the city and beyond. After the show, there is a talkback between the school groups and the cast. "It is a very visceral experience for [the children]," Atlantic Director of Education Heather Baird explained. "Completely different than a movie."

Beatty said that watching the school groups see the shows is very rewarding; they tend to be more engaged because of their background in the material, and also because they are away from their parents. The kids themselves learn something about putting on a production without much in the way of sets and costumes. After all, the Atlantic for Kids shows are required to use the set of whatever show is at Atlantic's Linda Gross Theater. Beatty explained the entire production is set up onstage by a crew of actors 30 minutes before each performance. (As an example of the interrelation between the Atlantic for Kids show and the Atlantic mainstage show -- Camp Kappawanna might extend, but only if Posterity, the current mainstage production, does.) Therefore the productions might seem like something schools themselves could do easily, encouraging them to produce their own works.

I love children's theater. I went as a child. I think people should bring their own children. I understand the economics of it are often prohibitive, but a program like Atlantic for Kids does so much to help get children into the theater. It is at young ages that people learn to love the theater. They learn to be creative. They learn that the performing arts are a valid, joyous endeavor.

To me, nothing seems better than a Lisa Loeb camp musical, so I encourage you to go so see Camp Kappawanna. But if you can't get there, maybe go to the Atlantic for Kids offering in the fall. Or maybe, if you have children, talk to your child's school about reaching out to the Atlantic. Or take a child to a different show in New York City. Or if you are outside of New York, encourage your theater companies to put on more shows for children. The more young people get into the theater, the more likely it is that they will support it as they get older.