Atlantic Yards development wasn't the first to use the modular approach in construction. But they are the first in the vertical residential space, which makes their story so unique.

Having worked in construction management for more than twenty years on projects of scale, from deep foundations in Philadelphia's skyline to New York State's first LEED Gold condominium, this author found the vision to bring a new form of project controls to new buildings intriguing.

Like most ventures, taking a modular approach to either data centers, such as Internap, or high-rise construction was born out of Steve Jobs "Think Different" mantra. It has long been part of civilization; from Asia's yin-and-yang to today when there is crisis, there is opportunity.

But for today's developers, how does one bring stability and transparency to a vast, fragmented supply chain?

For the Atlantic Yards project and its developer Forest City Ratner Companies, there was no bigger challenge than overcoming that hurdle when the real estate bubble burst in 2008.

With construction costs rising each year, a suddenly contracted real estate market, which shed millions of jobs and froze mortgage lending in the wake of the AIG bailout and the collapse of Lehman Brothers, what was a major developer going to do to stay profitable while build a competitive edge? 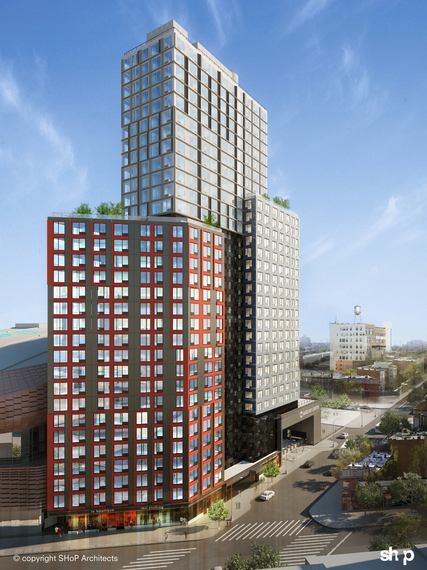 The Problem, Opportunity, Solution, Modular (POSM) approach to real estate development was born. But like any new advancement, it had to go through phases of development, permutations, tinkering with ideas and designs, a pilot test, and then on to the real thing -- a "live" project.

So how would Henry Ford's assembly line paradigm, which transformed the automotive industry a century ago, be applied to tall structures?

Like all new construction, buildings have lots of moving parts. Projects have multiple phases, a global supply chain, coordination between numerous trades and even more stakeholders. Then add changes on the fly, multi-agencies' fire, safety, electrical and building codes, and construction documents (plans and specifications), which are often only 50 percent complete at the start of a project, to the mix and one must ask: How do construction projects get completed on time and within budget?

Control of critical elements has become one area of focus, with the Atlantic Yards B2 Tower taking a step into uncharted territory. When finished, B2 will be the tallest modular construction in the world.

From Modular Concept to 'Mod' Creation

Once the startup, which is owned equally by both companies, brought the problem to the attention of Arup, a global consulting engineering firm, the modular idea began to take form. Early indications appear it will have a long-term positive impact on an industry that today suffers from razor thin margins.

Together, the two industry professionals, who have worked on several high profile, complex projects in infrastructure and building development space, complement one another nicely. Roger Krulak brings deep domain experience on coordinating the delivery, erection, scheduling, and installation of modular units, while Susan Jenkins provides the management oversight of the new fabrication plant, right in the Brooklyn Navy Yard. 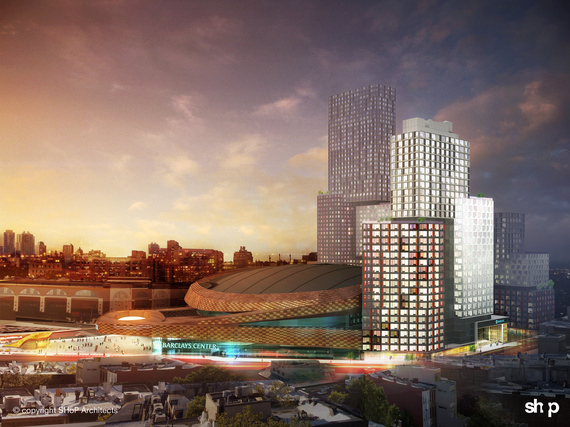 "Four years ago, Atlantic Yards had development plans for 16 new residential buildings. But with the market down, the volatility of construction and commodity pricing, Forest City began to look at other alternatives to cast-in-place concrete or steel erection to buildings," Roger Krulak said. "There were a number of methodologies, precast alternatives. Forest City began a R&D project to find what was possible with modular construction."

"Four months of research on paper, looking at the larger picture, we came up with a feasibility study building two projects side by side took a year," he said. "We had to look at the overturning effect of double-loaded corridors 45-stories high with a center core. We found that modular construction could deliver a building with a maximum height of about 65-stories." The size of B2, when completed will be 927 modular units that makeup 363 apartments.

"What is the typical size of a modular unit?" I asked.

"A mod box is nominally 10' high x 15' wide x 30' long," he said. "We needed to discover the limits of the gravity load ("dead" load) of a modular building, so it could carry the steel spans. We hired a manufacturer in Virginia that fabricates the steel frames to the mods."

From there, they are sent to the plant in the Brooklyn Navy Yard to be fitted out with mechanical, electrical, and plumbing roughing and fixtures, drywall, doors, frames, and hardware, and flooring and painting, among other interior finishes.

Like building a series of mobile homes, with everything except furniture include, the modular units when finished in the Brooklyn Plant assembly line are delivered by flatbed to the site and erected by crane in stacks.

"For B2, there are a maximum of 36 mods per floor on average. We can erect at a minimum eight mods a day," Krulak stated, or about one per hour. "The mechanical cutouts are done in the field and shop with vertical distribution. There's no welding, concrete floors, or sweating of pipe. When B2 is completed, it will carry 30 percent less weight than a conventional concrete building, but carry the same design performance. It should also produce a little faster schedule.

It meets the same criteria of wind and snow loads for a New York City building.

But the biggest impact has been taming the volatility found in construction projects, which too often are impacted by myriad changes, delays and claims.

From Factory to Fabrication in Brooklyn

Without taking a tour of the new plant, Susan Jenkins explained her role in the ambitious, groundbreaking project as operations manager of B2. She said, "95 percent of the construction takes place in the factory. We have a staff of five senior managers who oversee a production group, a prefab specialist team, and a quality control team. In all, we have 39 managers in the group with 118 trade associates working at the factory."

As a new entity, Ms. Jenkins explained, "We hired Virginia Banker Steel to make the modular units. The steel chassis come out of their yard with the actual assembly done in five phases."

In January 2010, Forest City Ratner hired Banker Steel of Lynchburg, VA, with a $50 million contract for the structural steel cladding for the new Barclays Center. Since that project went well, it made project sense for FC + Skanska Modular to hire Banker Steel for Atlantic Yards.

"The first phase of assembly starts with the chassis delivered by truck to the factory. We lift them on to steel pedestals, four feet off the ground. From there the assembly of bathroom pods takes place on the other side of the factory, while electricians and plumbers work on the remainder of the modular unit including full kitchens. Each pipe or fixture has a burlap bag of fittings and connections that go to each unit," she explained.

Besides wrapping finished modules with vinyl sheathing that reads, "Made in Brooklyn," with the first unit delivered to the site in December 2012, what gets Susan Jenkins excited about the B2 project is the reward of coming to the factory and being part of the "best, most successful construction management development team in the world."

It's also the opportunity to push new, innovative boundaries on existing prefabrication practices.

She added, "We measure efficiency everyday. Sure there's a learning curve, three to six months as the trades evolve," and understand the new methodology.

"The factory, when one visits it, recruits from a number of sources, including Helmets and Hardhats, the Brooklyn Work Initiative and the Brooklyn Navy Yard, among others. The factory provides a positive atmosphere to work in, climate control during this cold winter, with an ideal collaboration of various levels of trade associates, who learn up from an apprentice program, such as a plumber. The workers are jurisdiction agnostic."

Building a qualified workforce with many skill sets appears to be the icing on the modular cake of Atlantic Yards B2 Tower.