AT&T and Verizon, with the help of the FCC, have 'run out the clock', blocking me from examining the newly collected data from companies that purchase 'special access' services from AT&T and Verizon.

Special Access lines and services are not special; they are just business broadband services that are used by hospitals, schools or banks and include the data lines used for ATM machines or the wires that go to the cell sites that are used by competitors. And they are part of the state utility networks and use existing copper as well as fiber optic wires. The FCC's data collection is: "to conduct the necessary market analysis, the FCC needs more information from both providers and users of special access services".

We believe that our right to 'procedural fairness' to examine this newly collected data has been violated. The FCC is charged with the public interest and should have acknowledged our right to examine this information in a timely manner, as we addressed the specious claims of AT&T and Verizon, both of whom filed two objections, each.

Before I go through details about some new data and analysis we have pertaining to special access, here's where we are:

Read the letter we just filed with the FCC, as well as our responses to AT&T and Verizon's objections.

AT&T, Verizon and the FCC Have Run Out the Clock.

It is now February 17th, 2016 and the FCC ignored us and never bothered to reply to our request. Unfortunately, the deadline to file 'comments' has passed, and the 'reply' comments period is just ending, unless there is another extension. Regardless, we do not have the time to do a thorough analysis of the collected data.

Here's what you will find if you go through the filings. Verizon claims there are no problems. 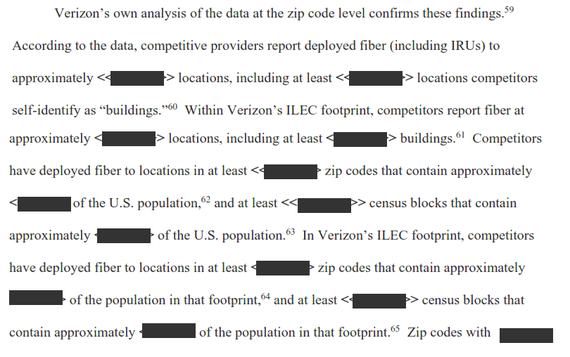 Oh, did you think you'd actually see something that's not redacted? Since this is 'confidential' info, no one except those who have access will be able to confirm or refute these statements.

We have uncovered new information about special access that the FCC does not have. The FCC can't answer the basic, bottom-line questions about whether the pricing of special access is fair and reasonable because the FCC hasn't audited the financial books of AT&T and Verizon's incumbent utility and the flows of money between and among the utility, the various lines of business, (including special access) and the subsidiaries -- for over 15 years. And without including our analysis, the FCC's answers could end up doing no more than protecting AT&T and Verizon's position.

And we know that the FCC's cache will corroborate what we already know -- America has been gouged by the incumbent utility companies known as AT&T, Verizon and Centurylink, and the FCC's own accounting rules have led to massive cross-subsidies that the FCC would rather not examine and will just act like the problem doesn't exist.

Moreover, we have even made some of our data public and available. We not only filed two new reports from our series "Fixing Telecommunications" in 31 separate FCC proceedings, but submitted a letter calling for an investigation of the data used in the recent FCC decision (USTA Forbearance Petition) that harms the competition that is tied to the special access issues.

The FCC's Manipulation of the Accounting Rules Made Local Service Look Unprofitable.

First, let's kill off a myth about the existing copper networks. 'Common wisdom' would have you think that the copper wires are unprofitable or that they are not being used and should be 'shut off'.

However, the FCC's recent summary data refutes that - and we're talking about lots of money that suddenly just showed up. In 2015, the FCC claimed that in 2013, special access revenues was now a $40 billion market, and that 60%, the majority of the market, are still 'copper-based' services using the existing copper utility wires -- that's over $24 billion dollars. This is up from their last projection, where they claimed that the entire market was only $12-$18 billion.

This means that the access markets are growing, and therefore the number of copper-based lines and services have also been growing -- and fast; according to the FCC the market more than doubled, (though some of this is because FCC's original numbers were just stale, made up approximations). 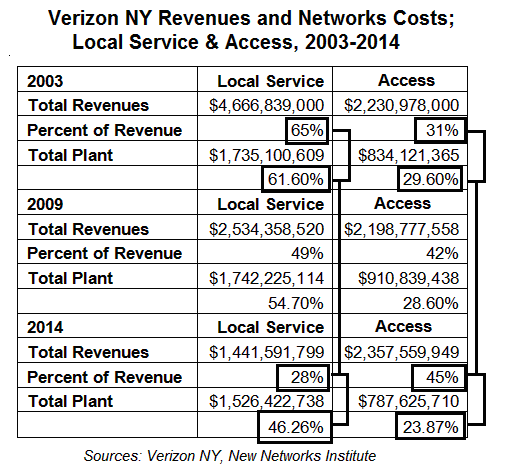 Verizon New York, like all of the other incumbent telecommunications utility companies, have three basic areas of revenues -- 'Local Service', 'Access' services, and 'Nonregulated' services. (There are also revenues that go to subsidiaries, such as Verizon Online, or are part of the 'Black Hole' revenues, which we describe in the reports.)

Local Service are the revenues from the copper-based, 'POTS', Plain Old Telephone Service, as well as add-on services like Caller ID, while Access service revenues are derived from the use of the networks by competitors who pay to connect and have their traffic use the networks; Special Access are the broadband and data lines, sometimes called 'backhaul', and the costs to use that service. (I'll leave Nonregulated out of this discussion.)

We found that the majority of construction and maintenance expenses were dumped into the copper-based Local Service network expenses over the last decade, based on a massive financial accounting shell game created, with the help of the FCC -- which we dubbed the "Big Freeze". And Access services , which includes Special Access, paid a fraction of all of the expenses, which makes them obscenely profitable; the 'savings', however, were not passed through to the customers who use these services.

Simply put: In 2001, the FCC decided that it would 'freeze' how expenses were applied to the phone companies' lines of business, so that all expenses would match the year 2000.

And the exhibit shows the harms and distortions the Big Freeze created. In 2003, 'Local Service' represented 65% of the revenues and paid 62% of the network expenses (known as 'Plant' and 'Non-Specific Plant'); 'Access' services, which includes Special Access, represented 31% and paid about 30% of the expenses.

And right off the bat, this makes the Access line of business very profitable as compared to expenses. In 2014, Access services paid only $788 million of the network costs, but the revenues were $2.4 billion. Local Service was $1.4 billion in revenue but was charged $1.5 billion in expenses.

And, of course, any second grader would ask -- But AT&T and Verizon have stopped upgrading these copper networks and are 'shutting off the copper'? How can Local Service be paying the majority of construction expenses?

NOTE: In Verizon New York, 80% of the Access revenues are 'special access' in 2014. However, this leaves out the access revenues that are "IP-based" or classified as 'interstate' and they would be either in a subsidiary or in the financial "black hole" we uncovered. Thus, the FCC's 40% that are part of the special access $40 billion market would NOT be on these financial books; (and we believe that the FCC's total revenues are very low.)

Other data is equally as damaging. Verizon's own filing at the FCC claimed that the company is spending a pittance on the copper infrastructure:

And, this $200 million is for all of the Verizon states. This statement was picked up by the Communications Workers of America, (CWA) and they challenged Verizon, as did many of the cities that are not being upgraded and the copper is not being properly maintained. Verizon's mea culpa, as stated in their letter to the FCC on September 18th, 2015, claims that this was an incomplete picture of all expenses for the copper wire maintenance, etc.

But one has only to compare Verizon's response with actual data. 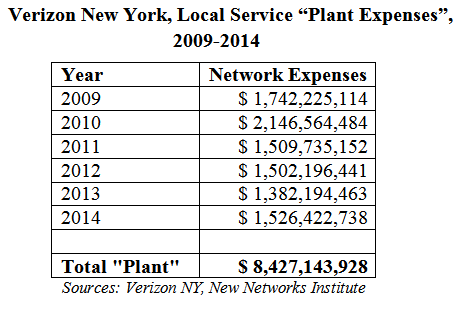 If Verizon New York is adding over $1.4-$2.1 billion in network costs annually to the Local Service category, where is all of this money going? Verizon stopped upgrading and maintaining the state copper-based utility networks around 2010-2012.

And, even if Verizon spent $200 million in just New York, and in just one year, it would still be a fraction of the network costs that have been allocated against the copper-based local phone service revenues.

This data clearly shows massive cross-subsidies of the other Verizon lines of business at the expense of getting cities wired and the networks maintained.

Special Access Paid a Fraction of the Corporate Operations Expense.

The FCC's Big Freeze dumped all of the other expenses disproportionately into Local Service. When you line up how much extra Local Service paid in "Corporate Operations" - lawyers, lobbying, etc., as compared to Access or the other lines of business, you get a sick feeling in your stomach of this massive con.

While 'Local Service' revenues declined, the expenses remained virtually identical year after year. And also, as we noted, the revenues of other services using the exact same copper networks, went up. In fact,

And again, just like construction, there is an eerie similarity to just how the company has manipulated the accounting with Access paying a fraction of this expense.

Based on this, like network costs, in 2014, Corporate Operations was about 1/3 of the Access revenues, while this expense is over 100% more than the Local Service revenues.

In sum, blocking our ability to view the newly collected FCC data means that the FCC is protecting AT&T and Verizon from our detailed investigation and the FCC has violated our right to procedural fairness.