On October 15th, 2002 -- over 13 years ago -- AT&T filed a Petition with the FCC to investigate the "special access" services that are controlled by the "Bell" companies, now AT&T, Verizon and Centurylink. The above quote supplies two of the section headings from the Petition's Table of Contents. I'll get back to this in a moment.

Map: The "Bell" companies before 1996 and the current AT&T, Verizon, and CenturyLink territories.

On September 30th, 2015, I, Bruce Kushnick, signed a letter of confidentiality to see new data, the first major collection of new information for over 13 years.

Now, special access services are not special. They are the wholesale and retail broadband and data lines for businesses, and are used by banks and hospitals, or even small businesses, as well as carry wireless calls and data. And these wires are mostly part of the state utility networks, which are controlled by AT&T, Verizon and Centurylink.

And, special access issues actually impact you directly as almost every mobile call you make or every selfie you take and send ends up going over these special access wires. And the price you pay for your cell service or the speed you can obtain are, in large part, tied to the control of these wires.

AT&T & Verizon Both File, Twice Each, to Block Us

But, as of December 18th, 2015, AT&T and Verizon, America's two largest wireline and wireless companies, had filed two objections, each, to block Bruce Kushnick, (mentioned by name), from seeing this new data. -- What are they afraid of? What do they think I will find?

Ironically, the plot thickens. On October 16th, 2015, the FCC announced an investigation, (Docket Number 15-147), pertaining to competitor issues with some special access services. However, it is essentially asking some of the same questions as AT&T's original Petition against now-AT&T, Verizon and Centurylink, dated October 15th, 2002. Yet, this is being started thirteen years later, almost to the day.

"By this Order, the Wireline Competition Bureau (Bureau) initiates an investigation into the terms and conditions of certain incumbent local exchange carrier (LEC) tariff pricing plans of AT&T, CenturyLink, Frontier, and Verizon for business data services (or special access services) that competitive LECs allege are unreasonable, anticompetitive, and lock up the vast majority of the demand for TDM-based business data services - assertions that the incumbent ILECs have disputed."

A Note on the Terms: Sometimes called the "Bells" or "ILECs", for "Incumbent Local Exchange Carrier", these are the companies that control much of the telecommunications network wires. "CLEC" or "Competitive LEC" stands for "Competitive Local Exchange Carrier" - i.e., competitors to the companies that control the wires but may use the wires to deliver services. "TDM" is the mostly copper wire-based telecommunications service.

Before I detail some of AT&T's trash-talk and gibberish in their latest objection, this piece of history might amuse (or annoy) you.

The Year Is 2002: AT&T Trashes AT&T, Verizon and Centurylink

The irony of this situation is palpable. The current special access story started when AT&T filed the Petition back in October 2002.

Here is the Petition's Table of Contents. A quick glance at just the section titles reveals some disturbing things. 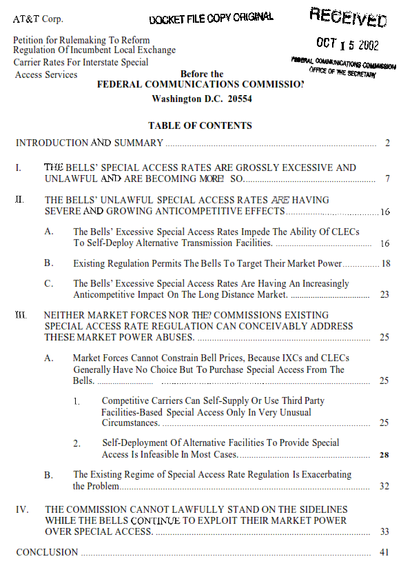 Note: The "IXC" are the "interexchange" companies that offer long distance (a call between two states) service, among other services.

And here is a quote from the opening of the original AT&T Petition, October 2002.

"As detailed below, there is now indisputable proof that: (i) large LECs, and particularly the Bell Operating Companies ("Bells"), retain pervasive market power in the provision of these services, (ii) the large ILECs are abusing that market power with patently unjust and unreasonable rates that impose a multi-billion dollar annual overcharge or tax on American businesses and consumers and also severely harm both local and long distance competition, (iii) the Commission's existing rules are incapable of addressing this worsening crisis, and, indeed, only exacerbate the problem, and (iv) the Commission therefore has a clear legal obligation promptly to reform its regulation to protect the public interest and to put an end to these monopoly abuses."

Not what you expected?

What the Petition says, in English, is -- the wires used by competitors have been severely overpriced and those who control these wires also control the price the actual retail customers that use these services will pay. It was time that the FCC did something to end these 'monopoly abuses'.

I note that in this timeframe, AT&T and MCI were the two largest competitors and their special access use was for voice calling as well as Internet and data services.

I should also point out that this AT&T Petition was written with the law firm, SidleyAustin -- and one of the lawyers on the team was Christopher Shenk, Esq.

Return to the Year 2015: AT&T Objects, Claiming We Don't Have Expertise Or Can Analyze Data.

Click to read the filings and docs mentioned below.

Ironies of ironies. First, AT&T's second filed objection to block our access, dated December 18th, 2015, was also handled by SidleyAustin and I noticed that it was also written by Christopher Shenk, Esq., who was part of the SidleyAustin original 2002 AT&T filing.

"Nor is there any evidence of such experience or expertise in materials filed by Mr. Kushnick and his organization in prior Commission proceedings. A search of ECFS (the FCC's document filing system) identified approximately a few dozen proceedings in which New Networks Institute, Mr. Kushnick, or the affiliated 'Tele Truth' made a filing. None contain any analyses of complex data. Instead, these past filings are primarily non-analytical compilations of links to websites, versions of blog posts or, in many cases, simply attacks on other parties before the Commission.

"None of these past filings demonstrate that these parties have any ability - or interest - in analyzing massive amounts of data to constructively participate in a rulemaking."

See our response for the details.

"We are amazed at the arrogance displayed by the ill-informed to make decisions out of their own lack of knowledge. AT&T-Sidley hasn't bothered to examine the reports we just filed, or our background and expertise."

We Filed Two Reports in 31 FCC Proceedings in December 2015

Prior to AT&T's second letter of objection, New Networks Institute released two reports (not blog posts, or links to web sites) from our new series "Fixing Telecommunications" and one of them highlights something we dubbed the FCC's "Big Freeze".

And in December, 2015 we filed these reports in 31 separate FCC proceedings, including the special access dockets.

Click to read the reports and our FCC filings.

Briefly, the FCC created rules and regulations over the decades that have gone amok. We uncovered a financial shell game which has never been examined by the FCC or any state commission. The FCC's 'Big Freeze' states that the year 2000 will remain the model for how the state commissions and phone companies calculate the expenses for the different lines of business, such as local service or special access. Unfortunately, over the last decade, this 'freeze' just puts most of the expenses into the local service part of the wired networks and the other lines of business never pay their fair share, including special access services. The consequence is -- special access services became extremely profitable, and are priced to keep it that way, while the majority of expenses are charged to the local phone customer, making it look like the networks are 'unprofitable'.

And our data is a direct hit to the special access market discussion. The FCC now claims that the special access market is $40 billion and growing. In fact, 60% of the total, that's $24 billion, is still based mostly on the copper wires using the state utility networks. The FCC's previous data had claimed it was only $12-$18 billion and that it was NOT mostly copper-wire based.

With $24 billion dollars worth of copper-wire-based services, all of the discussions claiming that the networks are 'losing lines' needs to be revaluated as this new FCC data shows massive increases in access lines.

Based on what we found, special access rates -- and therefore the cost of most services -- should drop significantly. Moreover, the wired networks are profitable. There are multiple implications to every FCC proceeding where Verizon et al claim that the copper networks are unprofitable and do not need to be 'maintained' or upgraded.

So, let us review.

It is now 13 years since the original AT&T Petition of 2002 was filed, and the FCC is just now starting an investigation.

The FCC's rules and regulations, especially the FCC's "Big Freeze", have manipulated the financial accounting since 2001, making local service look unprofitable while making special access very profitable, as it isn't paying its fair share of the costs.

But most importantly, this current version of AT&T is now attempting to block our right to see the new data, even though our research found similar, disturbing issues about special access that were detailed in AT&T's original Petition of 2002.

And the SidleyAustin lawyer, Christopher Shenk, Esq, was the lawyer for AT&T in both of these filings, 2002 and 2015.

And what happened to AT&T? In 2005, to make a long story short, after a series of continued assaults by the incumbents at the FCC, (too long to discuss here) AT&T was put up for sale and merged with one of the "Bells", SBC, which would rename the company at&t, small letters. As Infoworld wrote:

"The history of broken promises stretches clear back to SBC, which in 2005 purchased AT&T and took on its branding. Telecom analyst Bruce Kushnick's "Book of Broken Promises" exhaustively chronicles the gory details..."

Verizon also filed twice to block us; once as a separate letter of objection that backs AT&T, and the other as part of another objection.

In the 2002-2004 timeframe, MCI, (which merged with Worldcom previously and used both names) was a separate company and if AT&T was the largest competitor, MCI was Number 2. And MCI was also not happy about special access services. In fact, in 2004, MCI supported the AT&T Petition to investigate what are now Verizon, AT&T and Centurylink.

This 2004, MCI exparte letter states that the incumbents' special access prices were at "excessive levels" and that there had been "anti-competitive" behavior in pricing. 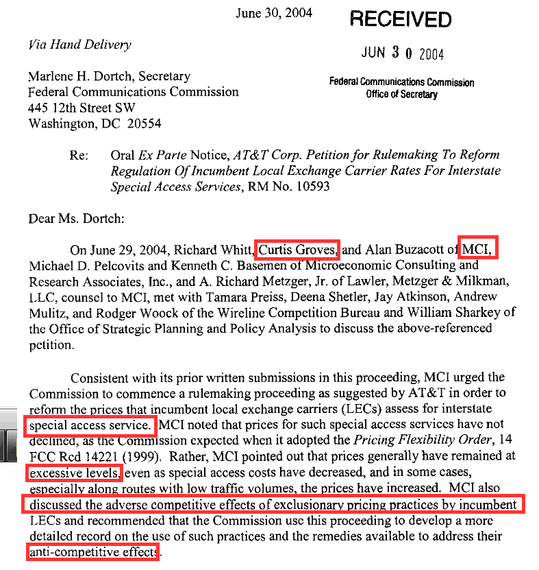 There are accompanying slides and exhibits with this filing. They seem to say - the prices for competitors to use special access are problematic based on the "exclusionary pricing practices of the incumbents", who are now Verizon, Centurylink and AT&T.

And this is more or less why the FCC started the investigation in 2015.

"Verizon Communications' winning $6.7 billion bid for MCI this week closes the latest and likely final chapter in one of the great rebel stories of American business. Two decades ago, MCI helped unravel the AT&T monopoly, transforming the telecommunications industry. Now it has been gobbled up by its archrival's offspring just as the competition it unleashed begins to creep into the local phone market."

And another ironic twist? Wouldn't you know it, and strange as it may seem, I found that MCI's lawyer, Curtis Groves, Esq. was part of the special access group from MCI that met with the FCC, among other things, in 2004.

But he is now, also, the lawyer at Verizon who filed the opposition letter against Bruce Kushnick in 2015.

In short, MCI backed AT&T's plan for an investigation of what is now AT&T and Verizon. By 2015, Verizon now backs AT&T plan to block my access to special access information -- but the lawyers stayed the same.

How did the two largest competitors in the US get killed off? We documented this in the "Book of Broken Promises".

Why do I want to see the data and what am I expecting to find and do with the knowledge (which I can't disclose)? XXXXXX and YYYYY followed by QQQQQ (redacted).

Read our response to AT&T's objections.

We wait for the FCC to grant Bruce Kushnick his legal right to see the new information in this New Year, 2016.