It isn't every day that AT&T mentions my name in an official 'objection' that requests that I be prohibited from seeing the 'special access' data recently compiled by the FCC.

What's AT&T hiding?... was my first thought when I received this letter. 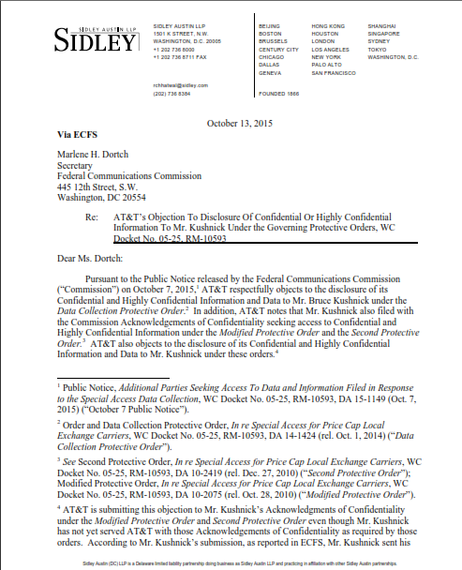 What is Special Access? I'll get to that in a second. After reading this story, if you think I should be allowed to see the 'special access' data collected by the FCC, as an independent analyst, with the goal to protect the Public Interest - that's you - and doing it 'pro-bono', (meaning at our own expense) as well as representing, en masse, the independent companies, non-profits, schools & libraries, etc. and competitors that use these services, then:

Write the FCC: specialaccess@fcc.gov, and write AT&T's lawyer from Sidley Austin LLP, that wrote the letter at rchhatwal@sidley.com with the caveat that what you write will be 'public'.

This letter has kept me laughing all day. My personal favorite is this:

"Given that New Networks Institute has never participated in this proceeding and has no obvious interest or expertise, it would be incumbent on Mr. Kushnick to demonstrate that New Networks Institute has the means and the capacity to submit material comments - i.e., comments that could make use of the voluminous data here in ways that could make a meaningful contribution to the Commission's analysis in this proceeding.

"The data submissions here contain some of these companies' most sensitive competitive information, and in recognition of that fact, the Commission's protective orders strictly limit access to the smallest possible circle of outside counsel and consultants. Providing access to those data to any individual that simply shows up and says "I want to file comments" would eviscerate those protections and would result in over-broad dissemination of critically sensitive business information that the parties submitted with the good faith understanding that their dissemination would be extremely limited by the governing Protective Orders."

We will be filing a formal response with the FCC.

Who knew I had no 'expertise' and just showed up? We've filed over 70 times at the FCC, starting in 1994, where we discussed the issue of 'access fees' and the problems with the FCC's data not matching other sources. And in 2004 we filed the first Data Quality Act complaint at the FCC, and it pertained to proposed increases of the FCC Line Charge, which is an "access fee", that appears on every local phone bill, and can add up to $6.50 a month extra to the cost, (not counting the hefty percent of taxes, fees and surcharges that are applied). And in 2014, we even filed a report, "It's All Interconnected", which has a large section on special access, in multiple FCC proceedings, (and its quoted multiple times in various filings in the special access proceeding in question).

Who Can See the Data? Probably those Who Shouldn't. Here is the List.

Special Excess Is Not Special.

In 2015, the FCC is finally releasing a database of collected information about special access lines and services, which, according to the FCC, has hit $40 billion.

The FCC writes that special access lines are broadband/data lines used by business.

The FCC left out: the companies don't just rent the line; they pay 'access fees' of using these networks.

In order to see this FCC data we had to sign a confidentiality agreement that restricts the use of the information in anything except what is filed in this original FCC proceeding, Docket Number 05-25. However, it will give us insight into a marketplace that is now totally obscured, hidden from view.

We agree that some of this data is competitor-sensitive, but the problem becomes - the FCC stopped collecting the data and did not mandate that the incumbent phone companies, like AT&T, disclose basic information about the number of working access lines or the pricing, which is now based on contracts and does not have to be made public.

And the stakes are very high -- $40 billion high, but more importantly, almost all of service prices, wireline or wireless, you pay monthly, are controlled by the pricing of special access networks, and most competitors state that AT&T et al have a monopoly and control the marketplace. Yet, AT&T's exparte letter of October 13th, 2015 makes the claim that "the real world data will show that competitors have many alternatives".

"The complaining carriers have a good reason for trying to jump the gun on the Commission's review of the special access data: the real-world data will show that they have many alternatives to price cap LEC offerings. The shift from legacy TDM services to Ethernet continues to accelerate. Indeed, evidence abounds that special access competition has become even more intense since the carriers last raised these arguments."

(And there are nuances a plenty, to numerous to discuss here.)

Considering we filed a petition for investigation against AT&T in 2015, pertaining to AT&T's claim that it completed 100% coverage of broadband in 22 states by the end of 2007, yet in 2012-2015 made contradictory statements that 25% of their territories had no broadband in rural areas -- we have the right, not to mention the obligation to investigate the special access data, even at our own expense.
An independent, objective, analysis about special access is an imperative, and it certainly doesn't exist today.

Finally, we will be filing a formal response, but the question now is - What is AT&T hiding? I guess they believe I will find it if I'm given a chance to look.